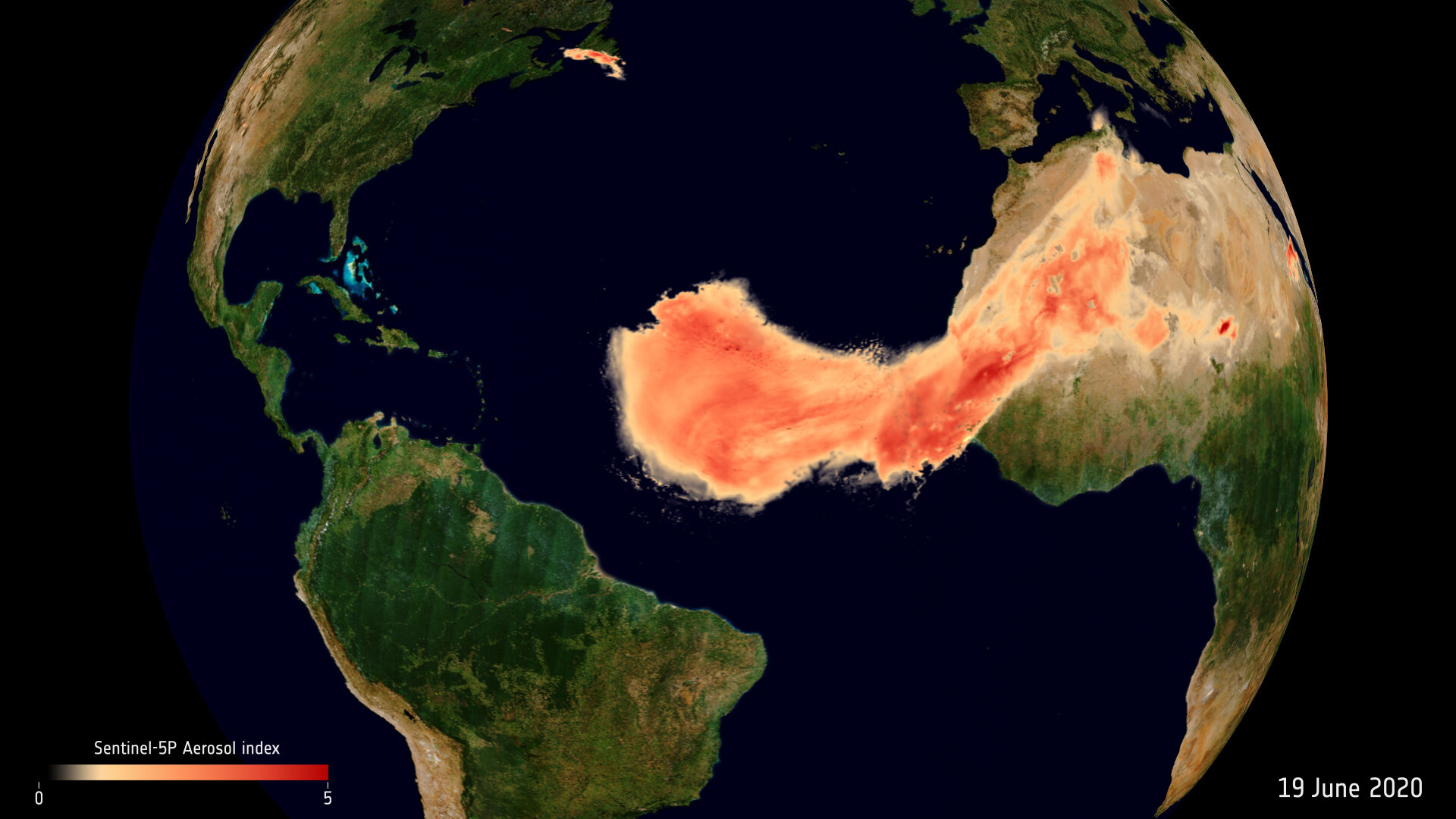 Every summer, the wind carries large amounts of desert dust particles from the hot and dry Sahara Desert in northern Africa across the Atlantic Ocean.
Data from the Copernicus Sentinel satellites and ESA’s Aeolus satellite show the extent of this year’s summer dust plume, dubbed ‘Godzilla,’ on its journey across the Atlantic.

This Saharan dust storm is also known as the Saharan Air Layer, which typically forms between late spring and early autumn, peaking in late June to mid-August.
Large amounts of dust particles from the African desert are swept up into the dry air by strong winds near the ground, as well as thunder storms.
The dust can then float for days, or weeks, depending on how dry, fast and turbulent the air masses become.
Winds in the higher troposphere then sweep the dust across the Atlantic Ocean towards the Caribbean and the United States.

Although this meteorological phenomenon occurs every year, the June 2020 plume is said to be unusual owing to its size and the distance travelled.
According to NOAA’s Atlantic Oceanographic and Meteorological Laboratory, the dust plume was around 60—70% dustier than an average outbreak – making it the dustiest event since records began around 20 years ago.

The Copernicus Sentinel-5P mission is dedicated to monitoring air pollution by measuring a multitude of trace gases as well as aerosols.
This animation shows the spread of aerosols from the Saharan dust plume moving westward across the Atlantic Ocean from 1 June to 26 June 2020.
This plume has reached the Caribbean, South America and the United States.

The animation above shows the spread of aerosols from the Saharan dust plumes moving westward across the Atlantic Ocean from 1 June to 26 June 2020.
Normally, Saharan dust plumes disperse in the atmosphere and sink into the Atlantic before reaching the Americas.
However this year, the dense concentration of dust travelled approximately 8000 km and can be seen arriving near the Caribbean and the southern United States.

The composite image below shows combined observations from the Aeolus satellite and the Copernicus Sentinel-5P satellite on 19 June 2020.
The underlying Sentinel-5P aerosol index in florescent yellow and green, which indicates the extent of the elevated Saharan dust plume over the Atlantic, has been overlaid with Aeolus’ aerosol and cloud information. 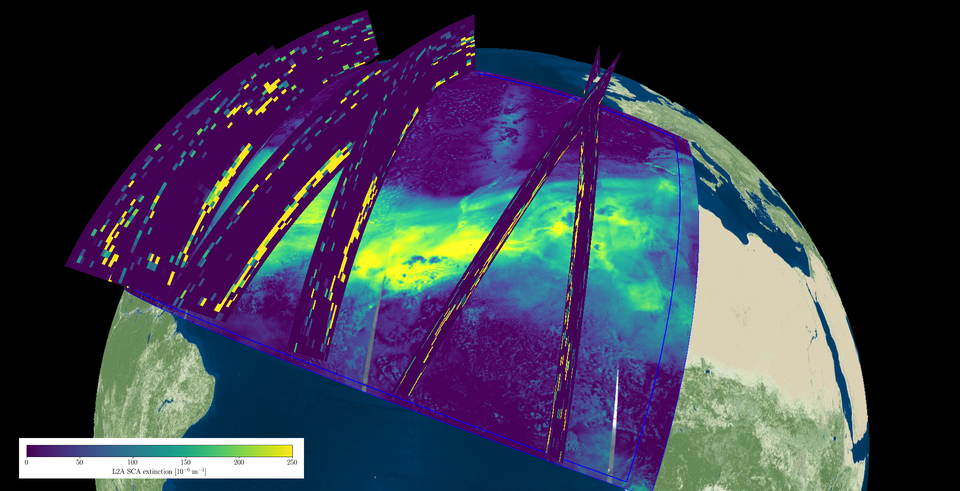 Aeolus data provides valuable information regarding the altitude and vertical extent of the aerosol layer, compared to downward-looking imagers, as it can determine the height at which the dust layer is travelling.
Aeolus data in this image indicates that most of the dust was 3—6 km above the ground.

These data are extremely important for air-quality models used by, for example, the Copernicus Atmosphere Monitoring Service, to predict how far the dust layer will travel and how it develops and therefore the effects it will have locally.

Different satellites carry individual instruments that provide us with a wealth of complementary information.
While the Copernicus Sentinel-5P satellite maps a multitude of air pollutants around the globe, Aeolus is the first satellite mission to acquire profiles of Earth’s wind on a global scale.
As shown here, Aeolus also delivers information about the vertical distribution of aerosol and cloud layers.
This combination of satellite data allow scientists to improve their understanding of the Saharan Air Layer, and allows forecasters to provide better air quality predictions.

The images below, captured by the Copernicus Sentinel-2 and Sentinel-3 missions, show the dust particles over Cabo Verde, Boa Vista, Cuba and Sao Filipe. 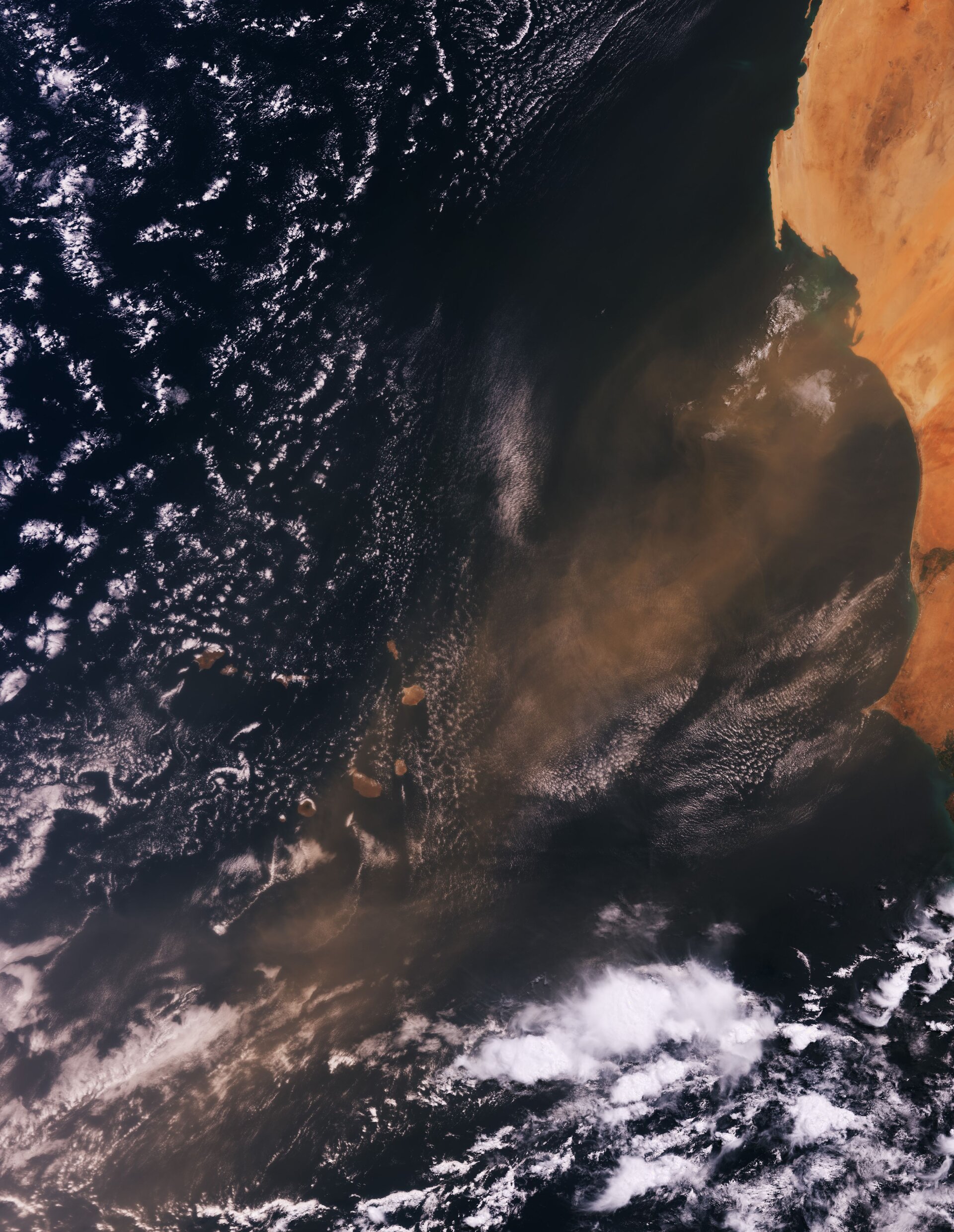 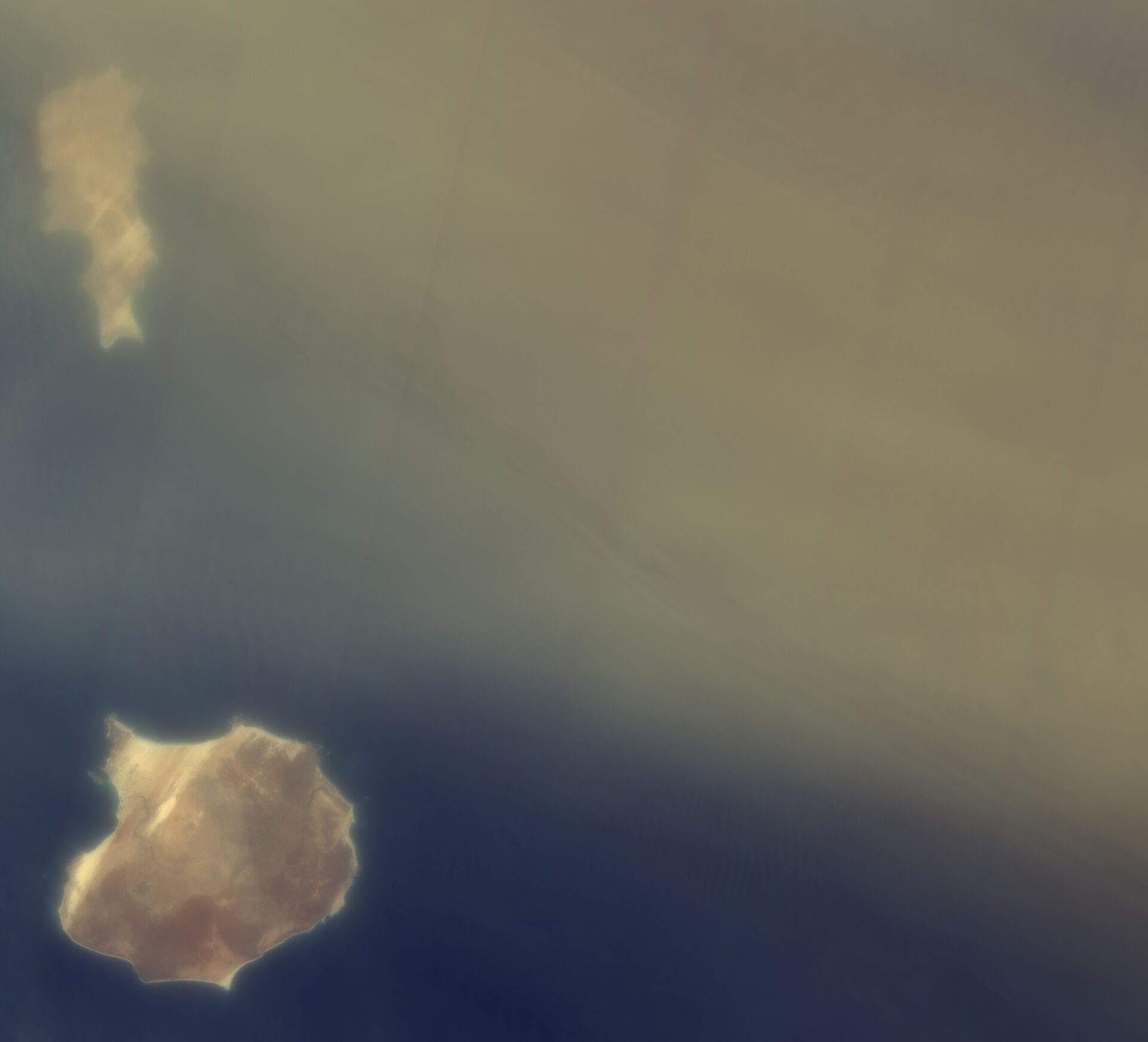 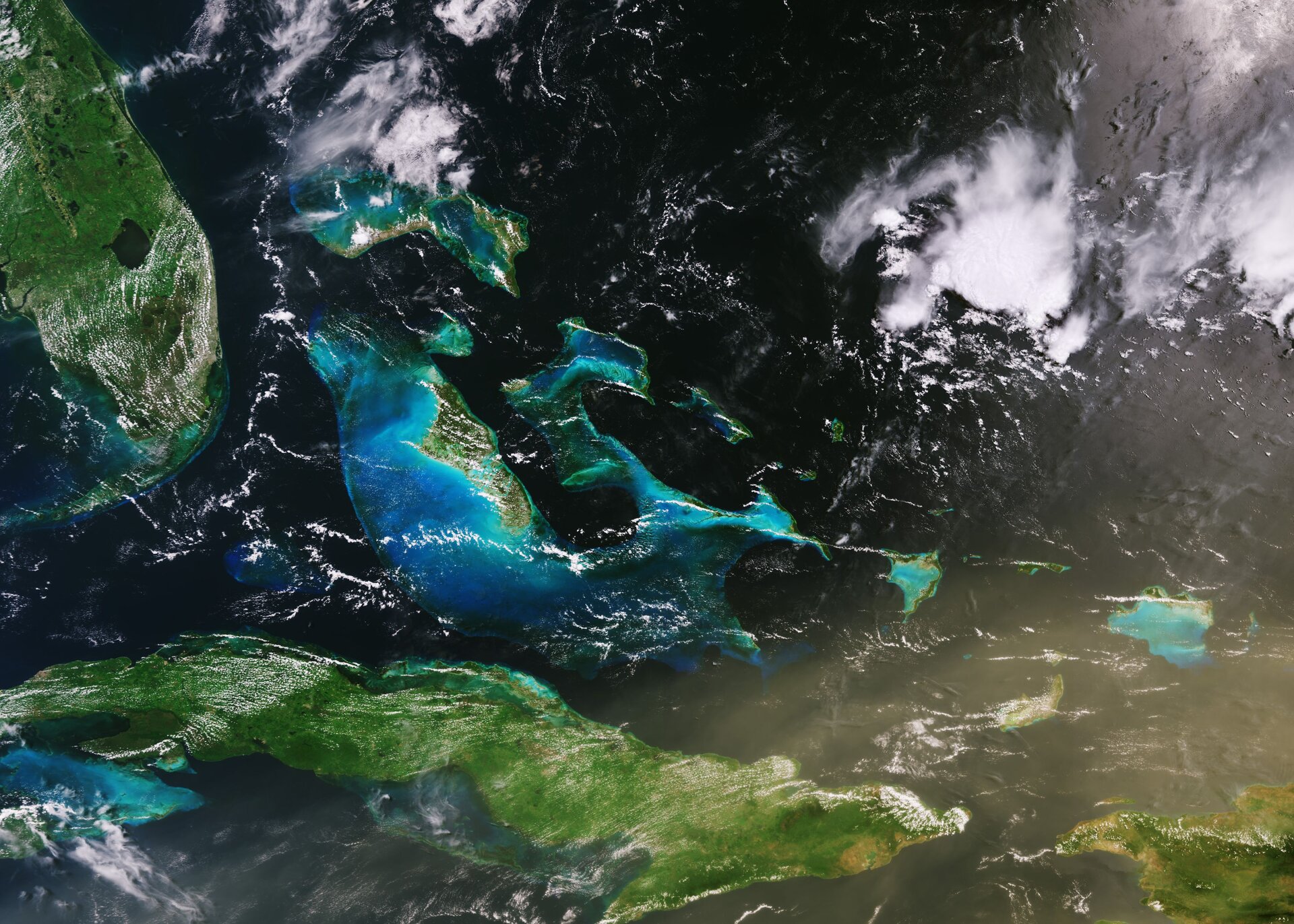 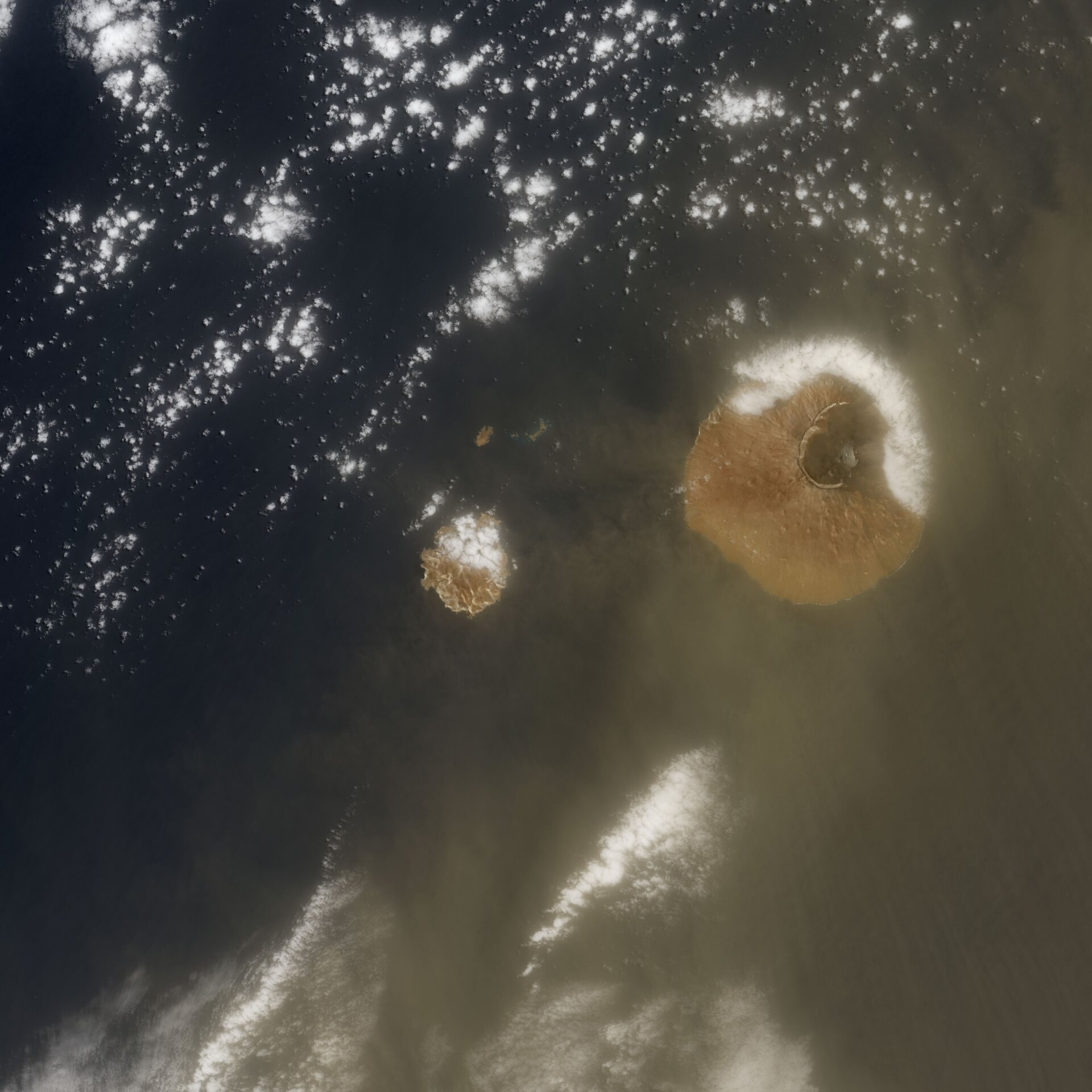 While the dust poses a threat for our health, causing hazy skies and triggering air quality alerts, the travelling Saharan dust plays an important role in our ecosystem.
The dust is a major source of nutrients which are essential for phytoplankton – microscopic marine plants that drift on or near the surface of the ocean.
Some of the minerals from the dust falls into the ocean, triggering blooms of phytoplankton to form on the ocean surface, which in turn provides food on which other marine life depends.

The dust is also essential for life in the Amazon.
It replenishes nutrients in rainforest soils – nutrients that would otherwise be depleted by frequent rainfall in this tropical region.

The dry and dusty air layers have also been shown to suppress the development of hurricanes and storms in the Atlantic.
Tropical storms need warm ocean waters and warm humid air in order to form.
If a storm were to develop, it would collide with the dusty and dry layers of air of the Saharan dust cloud, preventing it from growing further.