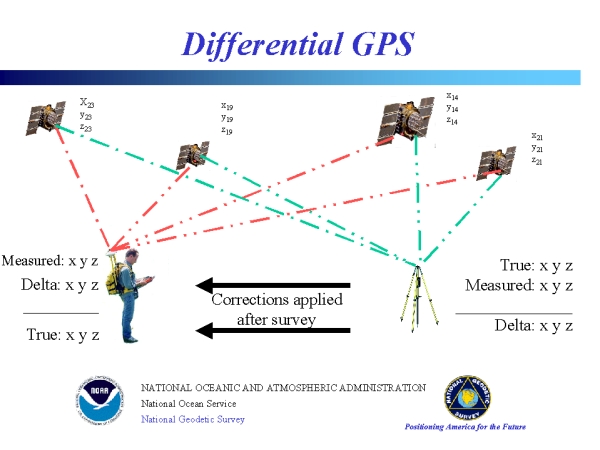 On June 30, 2020 the Coast Guard switched off the last Differential Global Positioning System (DGPS) signals after more than 25 years of service.

With the improved accuracy and integrity of un-augmented GPS over the last several years, and with the introduction of the U.S.
operated satellite-based augmentation system known as Wide Area Augmentation System (WAAS), the maritime community no longer has a mission requirement for DGPS.
GPS now provides sufficient positional accuracy to meet international navigation requirements for harbor approaches and to position Federal Aids to Navigation (ATON).

The Global Positioning System is a U.S. government owned utility that is now ubiquitous, and provides users with free, highly accurate positioning, navigation, and timing (PNT) services.
GPS technology can be found in cell phones and watches, shipping containers, and ATMs.
It is essential for all forms of navigation, farming, surveying and construction, banking and the financial markets, and the power grid.
In its earlier iterations the information GPS provided was not accurate enough for some applications, including the Coast Guard's positioning of marine aids to navigation.
To solve this problem, in the late 1980's and early 1990's, the Coast Guard established the Maritime Differential GPS System to augment the existing GPS signal with accuracy corrections and integrity monitoring by broadcasting over Medium Frequency from terrestrial broadcast sites.
The correction brought GPS position accuracy from several meters to less than one meter.

"The process includes the installation of navigation at a precise known location, which receives the GPS signal and compares the position solution from received signal to its known location.
This result of this comparison is then generated in the form of a correction message and sent to local users via a radiobeacon broadcast.
The received correction is applied by the user's GPS equipment to reduce the system position error, thereby improving the user's absolute accuracy.
This effort was coordinated through the Special Committee (SC) 104 created by the Radio Technical Commission for Maritime Services (RTCM)," wrote Gene W. Hall Lt. Cmdr., USCG Differential GPS Navigation Service, in 1996.

The solution caught on, and the use and availability of DGPS expanded beyond Coast Guard missions.
In its heyday, DGPS operated by the Coast Guard, Department of Transportation (DOT), and the Army Corps of Engineers (USACE), broadcast corrections from 85 sites that covered the nation from coast to coast, out to 50 nautical miles offshore.
Coverage also included the Great Lakes, Hawaii, Alaska, Puerto Rico and the U.S. Virgin Islands.

DOT and USACE have already discontinued the inland DGPS component.
The Coast Guard has operated the remaining Nationwide DGPS service, consisting of one control center and 38 remote broadcast sites, through its Navigation Center in Alexandria, Va.
The phased shutdown of those 38 sites began in 2015 and concluded on June 30, 2020 by turning off the signal from the final four sites located in the Great Lakes and the St. Lawrence Seaway.