Why we need sharks: the true nature of the ocean's 'monstrous villains' 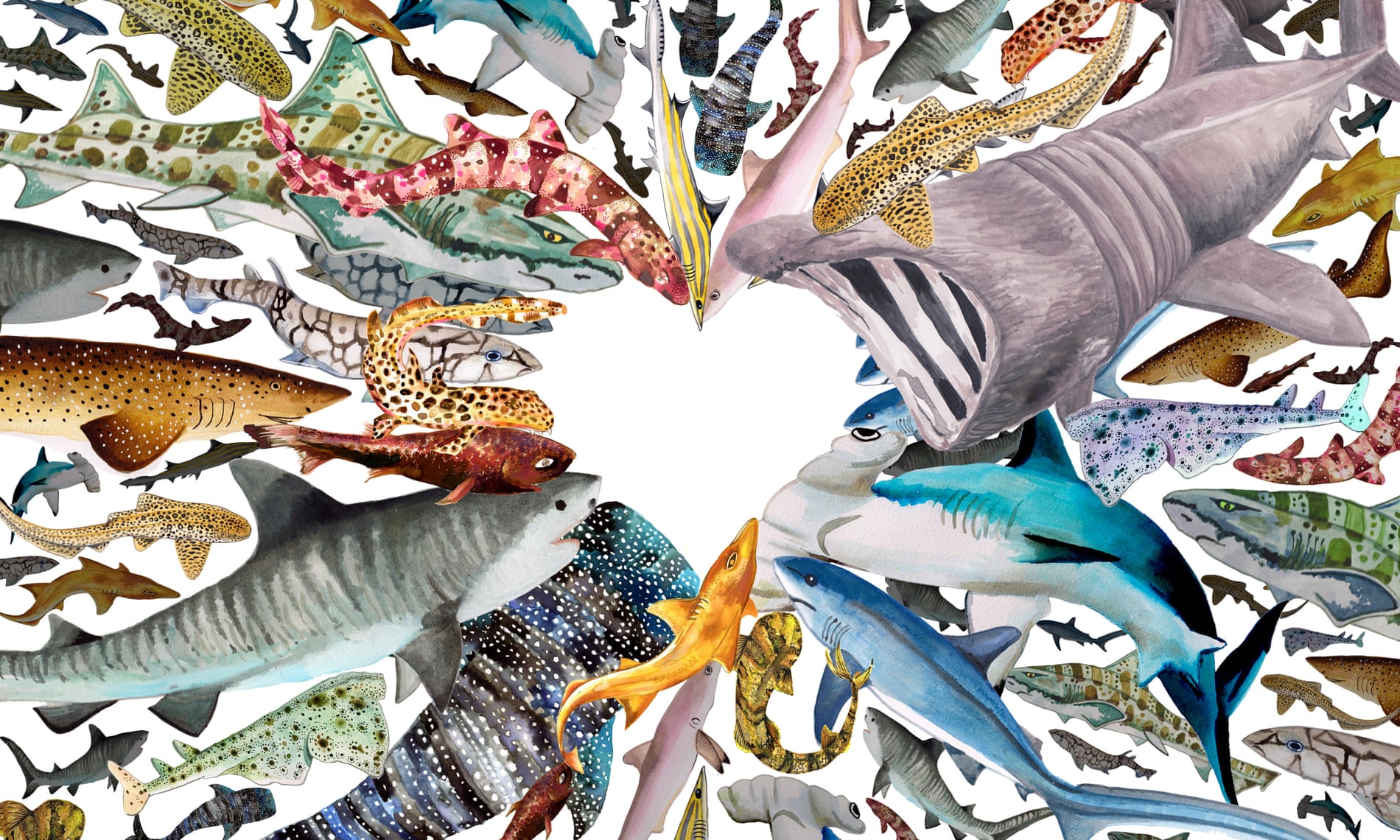 There are more than a thousand known species of shark.
Mysterious and often misunderstood, the shark family is magically diverse – from glowing sharks to walking sharks to the whale shark, the ocean's largest fish.
But these magnificent animals very rarely threaten humans: so why did dolphins get Flipper while sharks got Jaws?
Sharks are increasingly considered, like whales, to play a crucial role in ocean ecosystems, keeping entire food chains in balance – and have done so for millions of years. But these apex predators are now in grave danger.
The threats they face include finning ( in which their fins are sliced off before they are thrown back into the water), warming seas, and being killed as bycatch in huge fishing operations.
To celebrate our emerging understanding of sharks’ true nature and investigate the many underreported ways in which humans rely on them, the Guardian is devoting a week to rethinking humanity's relationship with the shark – because if they are to survive, these predators cannot be prey for much longer.
Illustration: Good Wives and Warriors

From The Guardian by Helen Scales

Why we need sharks: the true nature of the ocean's 'monstrous villains' There are more than a thousand known species of shark.

Why did dolphins get Flipper while sharks got Jaws?
These majestic, diverse animals bring balance to the ocean ecosystem – and they’re in grave danger

Each day, as the sun sets over the coral-fringed Raja Ampat Islands in Indonesia, an underwater predator stirs.
As predators go, it’s not especially big or ferocious – an arm’s length from head to tail, with a snuffling, moustachioed snout.


Cristina Zenato needs only two words to describe sharks—nature’s masterpiece. A professional diver in the Bahamas, she loves sharks.
Especially the Caribbean reef sharks that flourish around Grand Bahama Island thanks in large part to her efforts to protect them.
The sharks swim right up to the woman known as the Shark Dancer and nuzzle against her while she pets them like they’re dogs or cats.
We take a dive off Grand Bahama Island with Zenato to learn how she built such a strong bond with these beautiful creatures.

What’s unique is that it doesn’t so much swim along the seabed as walk.
Using its four fins as legs, and twisting its spine like a lizard, it can emerge from the water and hold its breath for an hour, strutting across the exposed reef and clambering between tide pools to find prey.

It’s a walking shark, and far from the stereotypical view of these baleful beasts, it tells an alternative story of how sharks look and live.
Biologists recently confirmed there are nine species of walking sharks.
They are the ocean’s newest sharks – probably only 9m years old as a group, with the two youngest species splitting apart less than 2m years ago – challenging the long-held notion that sharks are ancient and unchanging.
They are not evolutionary survivors from bygone eras, but animals that continue to adapt. 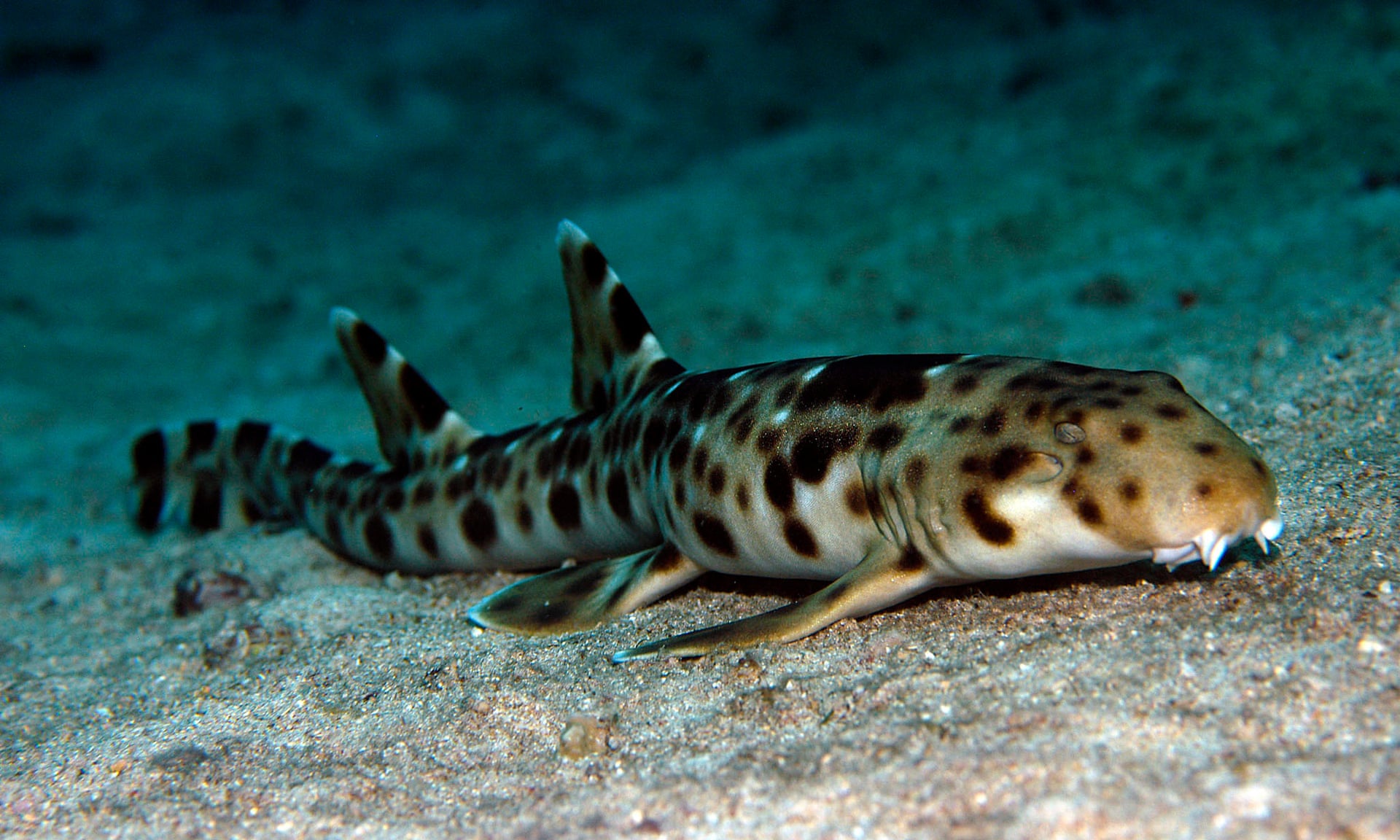 The walking shark, the newest species of shark in the ocean.
Photograph: Gerry Allen/Conservation International

The walking sharks themselves are just a fraction of the immense diversity of sharks.
There are bramble sharks and gollumsharks, night sharks and shy sharks, clouded angelsharks and splendid lanternsharks; there are fat catsharks, mouse catsharks, frog, cow and weasel sharks.
In all, more than 500 elasmobranch species are alive today.
One in 10 shark species are bioluminescent: they light up in the dark.
Another is so small you could tuck it in a pocket, and it has little pockets of its own – filled, for an unknown reason, with glowing goo.
Some sharks puff up to look bigger and scarier than they really are.
Mother sharks can be pregnant for three years at a time, or have virgin births.

There are bramble sharks and gollumsharks, night sharks and shy sharks, clouded angelsharks and splendid lanternsharks

But if all you knew about sharks you learned from Hollywood, you’d think they were aquatic horrors.
Sharks have a film genre all their own: there are movies about ghost sharks and zombie sharks, sharks that squirt acid, killer sharks that swim through sand or snow, and a staggering six instalments of the Sharknado film franchise.

Even more problematic is when the more believable films depict sharks as monstrous villains: in 2016, The Shallows featured a female surfer being brutally attacked by a vengeful great white, leading a group of marine scientists to write an open letter to Columbia Pictures warning that the movie was a dangerous mischaracterisation that could keep the tide of public opinion turned against sharks.


Olympic great Michael Phelps races a 'great white shark' on Sunday as part of .
The shark was in-fact a computer simulation rather than a actual great white but its swim speed was calculated using data collected from the real thing.
Phelps finished the 100m course in 38 seconds, two second slower than the 'shark'

In reality, sharks are overfished in their millions.
They aren’t adapted to being prey, rather than predator: sharks grow slowly, spending ages as teenagers before reaching maturity; they lay few eggs and give birth to few pups, not enough to replenish dwindling populations.
Those that stay alive can spend decades, even centuries, absorbing man-made pollutants and plastics.
Individual sharks have seen their world become hotter and more acidic in their lifetime: Greenland sharks swimming around today were born when the Arctic Ocean was several degrees cooler.
The upshot of all this is bleakly predictable.
At last count, a quarter of all sharks and their flattened cousins, the rays, were found to be threatened with extinction.Q&A

Sharks matter to humanity.
Much is lost when they vanish from the seas.
“There’s a lot we can learn from sharks,” says Jasmin Graham, shark biologist and project coordinator of MarSci-Lace at Mote Marine Laboratory in Florida, where researchers are investigating how sharks quickly heal wounds and how they evolved immunity to many diseases.
“If they’re not here, then that evolutionary history, that information, is lost.” At the 2008 Beijing Olympics, swimmer Michael Phelps won eight gold medals wearing a suit inspired by the tiny, toothlike denticles in sharks’ skin that reduce drag and boost their speed.
(The suits were later banned after studies revealed that they trap air bubbles, helping swimmers float.) 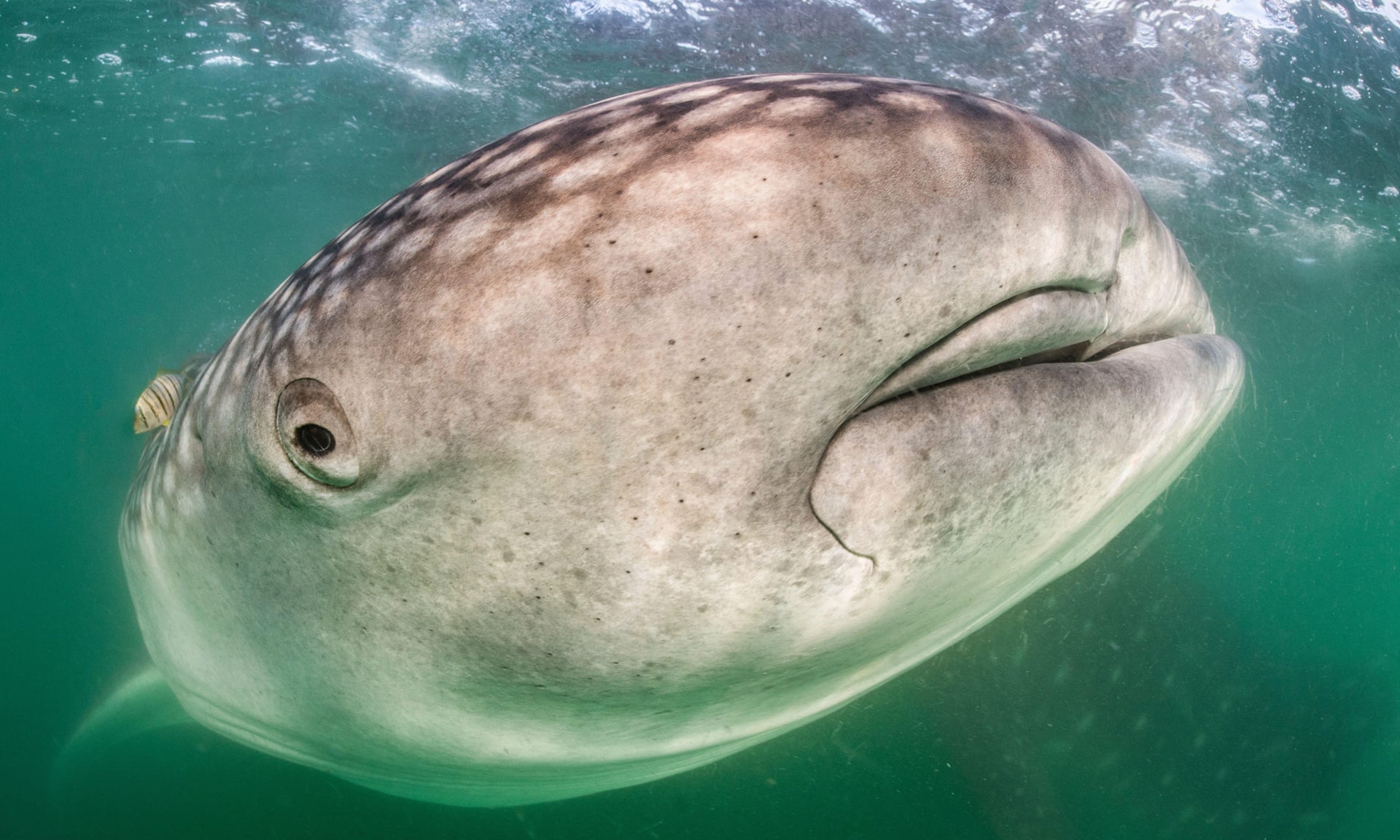 Whale sharks, the largest fish in the sea, scoop up tiny plankton as they travel.
Photograph: Nature Picture Library/Alamy

Sharks matter not just because they can be useful for humans, however, but entire ocean ecosystems.
“Lots of shark species have been shown to be keystone predators,” says Graham.
“They maintain balance in ecosystems and keep things in order, removing weaker, sicker prey and stopping any single species from exploding in numbers and taking over.” One study comparing remote islands in the Central Pacific showed that when sharks are fished out, coral reefs can become dominated by small fish and overrun by algae.
“We don’t understand until we lose the species how important it was,” says Graham.

We need to talk about sharks.
Though no sharks have yet gone the way of the dodo, plenty of species are lined up for imminent extinction.
And the loss of sharks is not just about species blinking out, but a diminishment from their former abundance.
Just like the erasing of native fauna from the continents – of bears and wolves, tigers and lions, koalas and kakapos – so the oceans are now losing their sharks.
The only difference is that their dying out mostly goes unnoticed.

In more than 20 years of diving and researching the oceans I’ve had many encounters with wild sharks, each one a moment to treasure and note in my dive logbook.
I used to feel adventurous when family and friends asked me if I was scared to dive with sharks.
(No, never.) But increasingly, as the question keeps being asked, it unsettles me – that so many people still think this way. 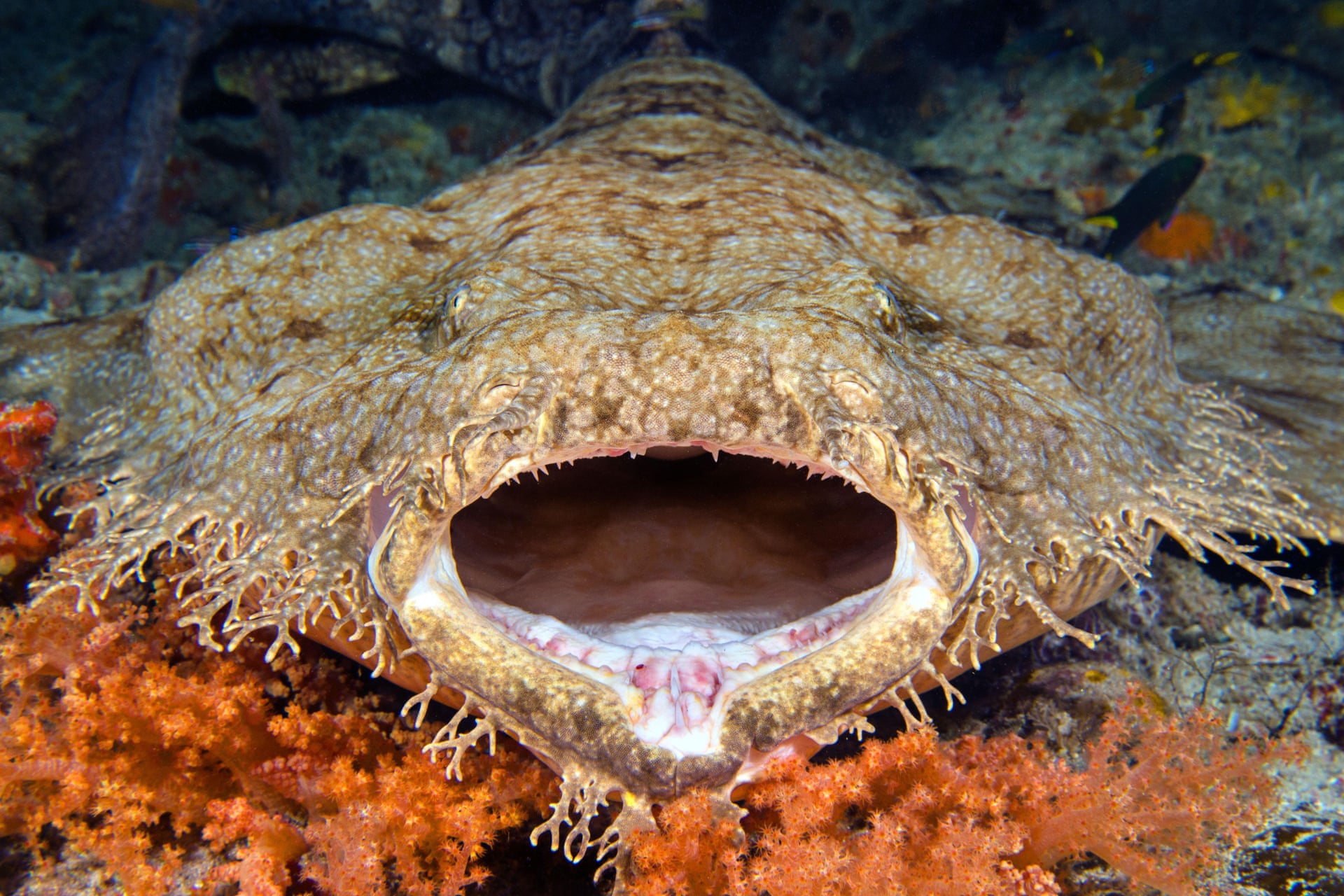 For years, scientists and conservationists have been saying that sharks have more to fear from humans than we have from them.
Pick whichever statistic you like best of things far more likely to kill you: a toppling vending machine, a falling coconut.
Still there’s this lingering idea that sharks are dangerous, vindictive and brutal.
Fear is certainly not being deliberately stoked by the very few people who’ve been attacked by sharks, many of whom, despite losing limbs, have become outspoken advocates for shark conservation.


Marine biologist Ocean Ramsey shares exclusive video (Januay 2019) of her and her team of divers’ encounter off the coast of Hawaii with what could be the largest great white shark on the planet.

“As a kid, I saw Jaws, and I wasn’t particularly scared of it,” says Graham.
“I was just asking why? Why do people think that they’re so scary? How are they different from a dolphin? They’re both predators.
Why did the sharks get a bad rep and dolphins got to have Flipper?”

These majestic animals are doing much worse worldwide than they were back in 1975 when Jaws was released.
They need all the positive publicity they can get.
New stories need to be told about sharks – the big ones and small ones, the ones that walk and glow, and all the other things they can be.