That fresh sea breeze you breathe may be laced with microplastic 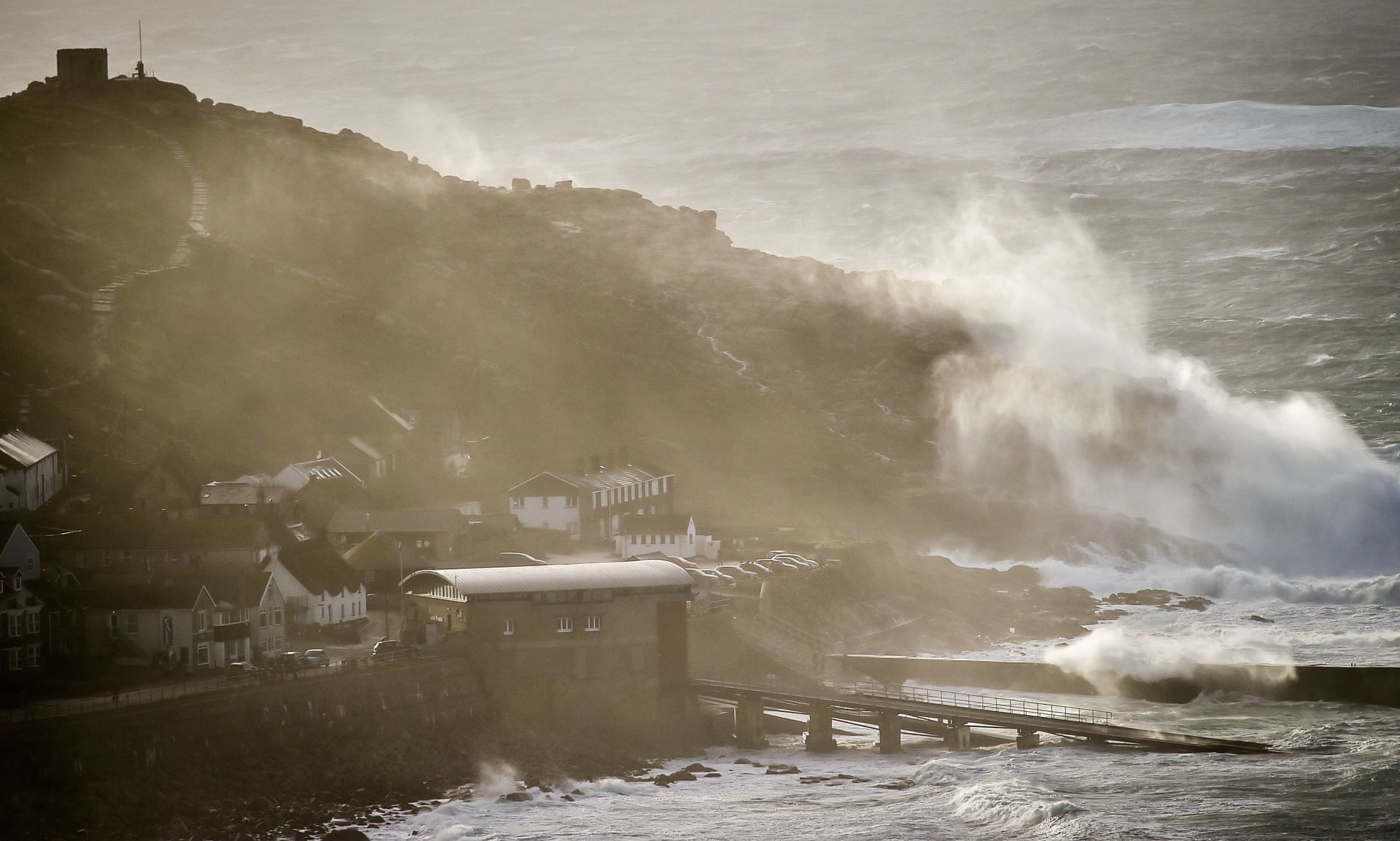 The study casts doubt on the assumption that once in the ocean, plastic stays put, as well as on the restorative powers of a fresh sea breeze.
Photograph: Ben Birchall/PA

Researchers have discovered that the ocean is burping tiny plastic particles, which then blow onto land—and potentially into your lungs.

When you stand on a beach and take in a great big gulp of fresh air, you’re actually breathing bacteria, viruses, and aerosolized salts.
Those are all punted into the air when whales breach or waves crash or even when bubbles rise to the surface of the sea, ejecting material that gets caught up in sea breezes and fog banks.
And as much as I hate to rain on your beach day, you can now add an omnipresent pollutant to that list of debris: microplastics.

Microplastics are the ground-up remnants of plastic bottles and bags, or the synthetic fibers shed from your polyester clothing—technically anything smaller than 5 millimeters long—and of late scientists have been finding them everywhere, from the deep sea to the tallest mountains.
And now, writing today in the journal PLOS ONE, researchers from Europe and South Africa demonstrate in the lab how popping bubbles can fling microplastics into the air; the same team also gathered microplastics from the air flowing over a French beach.
The picture ain’t pretty: They found that up to 19 microplastic fragments float in a cubic meter of air.
Even worse, they were measuring at the edge of relatively clean Atlantic waters—highly polluted seas like the Mediterranean are probably flinging far more particles onshore.
Globally, the researchers calculate that 136,000 tons of microplastic could be blowing onshore each year.

Up until now, scientists had considered the ocean to be a kind of microplastic sink.
When you wash your clothes, for instance, synthetic fibers flow in wastewater to a treatment plant, which only removes some of the microplastic before pumping the water out to sea.
Plastic trash also flows into rivers and eventually out to sea, where it breaks into ever-smaller pieces over time.
Ocean currents then transport the microplastic particles far and wide: Just last month, another group of researchers showed how microplastics flow into the deep sea, eventually settling in sediment and corrupting seafloor ecosystems.

And in the ocean the plastic bits stayed, researchers once thought.
But this new work shows how something as minuscule as a bubble can burp microplastics into the atmosphere.
Oceanic bubbles are quite complex; when one comes to the water’s surface, it brings both air and hitchhikers.
“That bubble actually acts as like a sponge for tiny particles like sea salt, viruses, bacteria, and—potentially—plastics, as it comes up through the water column,” says University of Strathclyde microplastic researcher Deonie Allen, co-lead on the new research.
“So the outside of that bubble is now sort of coated in particles.” 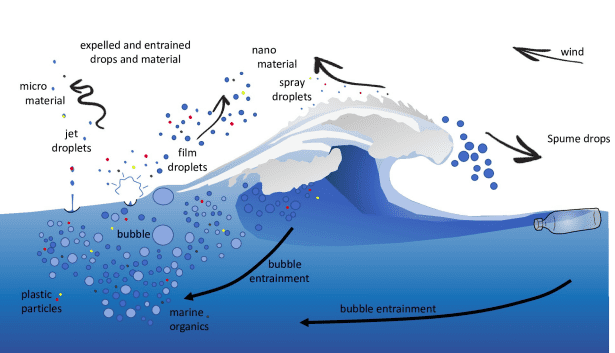 When the bubble surfaces, half of it protrudes above the water line, with the other half hidden beneath it.
“On the top side out of the water, you've got a very thin layer of water, which when it bursts actually fragments, and that releases nano-sized materials,” says University of Strathclyde microplastic researcher Steve Allen, co-lead on the work.
(The Allens are spouses.) “But when the ocean tries to fill the void left by the bottom half of the bubble, it comes in from all sides and produces the ejection, or the jet,” he continues.

In the lab, the Allens and their colleagues used a black light, or long-wave ultraviolet light, to watch this phenomenon in action, as their bubbles spewed fluorescent materials into the air.
Scientists were already well aware that oceanic bubbles fling viruses, bacteria, and salts into the atmosphere, but in this experiment they’ve shown that microplastics come along for the ride as well.

And that’s not even the most violent transport method in the sea: All sorts of gunk is flung into the air when waves crash against the shore.
It’s this particulate matter that makes its way into the atmosphere, attracting moisture to form fog.

Out in the field, the researchers chose a particularly rough and stormy section of French coastline along the Bay of Biscay to search the air for microplastics.
They set up two kinds of collectors: one that could pull particles out of the water droplets that make up sea spray, and another that filtered just the dry air of onshore winds.
And sure enough, there they found microplastic particles, as many as 19 per cubic meter on a misty autumn day.

The ocean, then, isn’t sequestering microplastics, as scientists previously believed—it seems to be actively ejecting them into the atmosphere, spreading them around the planet.
The Allens’ previous research has shown that winds can carry microplastics far and wide, transporting them from European cities onto the supposedly pristine mountaintops of the French Pyrenees.
This new research makes that bad news all the worse.
“There's an awful lot of water in the world,” says Deonie Allen.
“So if you can see water surfaces as not just a sink, but also a source, then that's a really large surface area that could then be influencing the amount of microplastics that are not just in the atmosphere.”

The beach of Mimizan in France where researchers measured microplastics on the sea breeze.
Photo : Nicolas Tucat / AFP

This work goes a long way towards illuminating a microplastic pollution cycle that’s far more complex than previously believed.
“Previous studies have shown that plastics and microplastics can be washed onshore from the oceans, and that larger plastics can be blown onshore.
But this is the first study to show that sea spray can release microplastics from the ocean,” says University of Manchester earth scientist Ian Kane, who researches how deep-sea currents transport microplastics, but who wasn’t involved in this new work.
“Even if blown onshore, it is likely that much will make its way, eventually, into watercourses and the sea. Some may be sequestered into soil or vegetation and be ‘locked up’ indefinitely.”

The Allens’ work brings with it another troubling implication that demands more research.
If microplastics can “seed” clouds, like other particulate matter from the sea does—acting as the foundation on which moisture accumulates to build a nice big fluffy cloud—what does that mean for the transportation of water on Earth?

“If there's enough of it, it can change the size of the cloud, and also the albedo of the cloud,” says Steve Allen.
That is, the whiter a cloud is—thanks to those microplastics attracting more moisture—the more of the sun’s energy it can bounce back into space.
And that might actually help cool the planet.
“So that'll have a positive effect for us for climate change,” he says.

On the other hand, he points out, this extra sequestering of water into clouds might also change rainfall patterns.
“It'll gather the moisture that's in the air,and not produce rain,” Allen continues.
“That rain can move somewhere else.
So we would get rain somewhere it doesn't belong, and we don't get rain where we need it.”

Plus, think about what the scientists couldn’t see.
Plastic doesn’t just disappear entirely—as it degrades in the environment, it breaks into ever smaller pieces, meaning there could be even tinier particles that are slipping through researchers’ filters.
“The smaller it gets, the easier it will be to get into the atmosphere, which is troubling,” says Scripps Institution of Oceanography microplastic researcher Jennifer Brandon, who wasn’t involved in this work.
“Especially because in the atmosphere, it can travel really far.” For example, sand from the Sahara readily travels across the Atlantic and lands in South America.
If microplastic is moving just as freely around the globe, it’s hard to imagine an ecosystem that’d be safe from contamination—no matter how remote it may be.
And that could have untold implications for the organisms that live there.

Super tiny, lightweight particles could also more easily penetrate through tissues of humans and other creatures, for instance passing through the gut lining if swallowed.
Scientists are only in the very early stages of studying how ingested or inhaled microplastics affect our bodies, but we can already assume it isn’t great for us.
They’re worried that the chemicals from the microplastics themselves might leach into our tissues, and also about the biological gunk that grows on these particles.
In the sea, this is particularly problematic, because microplastics accumulate pathogens as they float through the water.
What happens when that all gets in your lungs after a day at the beach is, at this point, anyone’s guess.