Climate crisis: Sea level ‘on course to rise by one metre by 2100’ if global emissions targets are missed

Oceans rising faster than previously thought, according to survey of 100 specialists

Sea-level rise is faster than previously believed and could exceed 1 metre by the end of the century unless global emissions are reduced, according to a survey of more than 100 specialists.

Based on new knowledge of climate sensitivity and polar ice melt, the experts say coastal cities should prepare for an impact that will hit sooner than predicted by the United Nations and could reach as high as 5 metres by 2300.

“A global sea-level rise by several metres would be detrimental for many coastal cities such as Miami, New York, Alexandria, Venice, Bangkok, just to name a few well-known examples.
Some may have to be abandoned altogether as they cannot be defended,” said co-author Stefan Rahmstorf, from the Potsdam Institute for Climate Impact Research in Germany.

In the worst-case scenario – with rising emissions and global heating of 4.5C above pre-industrial levels – the study estimates the surface of the world’s oceans in 2100 will be between 0.6 and 1.3 metres higher than today, which would potentially engulf areas home to hundreds of millions of people.

By contrast, if humanity succeeds in cutting carbon dioxide and holding the increase in temperature to 2C, the rise would be a more manageable 0.5 metre.

The figures for both pathways are more pessimistic than those outlined by the UN intergovernmental panel on climate change (IPCC), which predicts the worst possibility is a 1.1-metre rise by 2100.

The gap reflects advances in climate science and differences in approach.
The IPCC works largely through consensus among scientific working groups, which tends to produce relatively conservative estimates.

By contrast, the new survey – published in the journal Climate and Atmospheric Science – aggregates the views of 106 specialists, who were chosen because they have published at least six peer-reviewed papers on the subject in major academic journals.
As a result, the predictions are more representative of a range of views in the field. 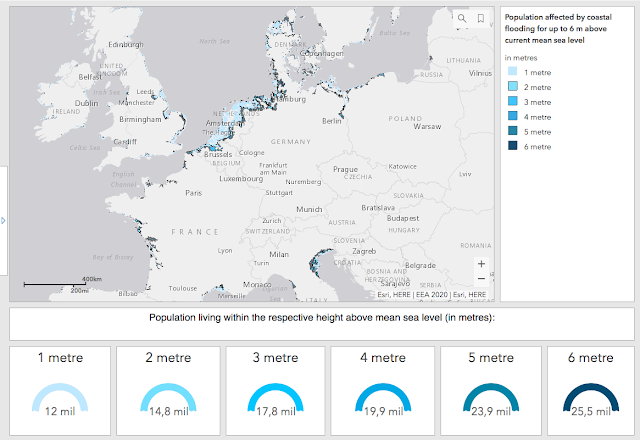 The map shows the estimated area of, and the current population in, low-lying regions at 1 to 6 m above current mean sea levels.
In the absence of any existing or future coastal protection, these areas would be permanently inundated in the coming centuries if sea level rises by the projected amount.
However, temporary coastal flooding of these areas caused by extreme high sea levels could occur much earlier as a result of the combined effects of mean sea level rise, waves and storm surges.

The countries and regions with the largest shares of low-lying areas include:

The higher estimates highlight growing concern about the world’s two biggest ice sheets, in Antarctica and Greenland. Satellite data and on-the-ground measurements show these regions are melting faster than most computer models predicted.
Many of the scientists said there was now greater understanding of the risks posed by marine ice-cliff instability, which can lead to the collapse of ice shelves.

The lead author, Prof Benjamin Horton of the university’s Asian School of the Environment, said the research aimed to condense the growing mass of academic studies about sea-level projections into a simple overview.
“It is useful to survey leading experts on the expected sea-level rise, which provides a broader picture of future scenarios and informs policymakers so they can prepare necessary measures,” he said.

The authors said the results showed how much warming – and sea-level rise – could be avoided if governments fulfilled their 2015 Paris climate agreement promises to cut emissions of the gases that are heating the planet.
Most countries are far off reaching their goals.

“Like in the Covid pandemic, timing is critical to prevent devastation. If you wait until you already have a serious problem, then it is too late. Unlike with corona, sea-level rise cannot be stopped for many centuries or even millennia once ice sheets have been destabilised past their tipping points,” Rahmstorf said.

The coronavirus pandemic has temporarily slowed the discharge of carbon dioxide and methane because there are fewer cars on the road and industrial activity is lower.
The International Energy Agency projects global fossil fuel emissions will decrease by 8% this year.

But, without deeper structural changes, the reduction is likely to be temporary and will make little difference to the build-up of greenhouse gases in the atmosphere.
The Met Office predicted on Thursday carbon dioxide measurements at the Mauna Loa measuring station would rise 2.5 parts per million this year.

“Although emissions are reducing this year, this does not mean the build-up of CO2 in the atmosphere will reverse – it will just be slightly slower” the Met Office’s chief CO2 forecaster, Richard Betts, said in a blogpost.

“An analogy is filling a bath from a tap – it’s like we are turning down the tap, but because we are not turning off the tap completely, the water level is still rising.”