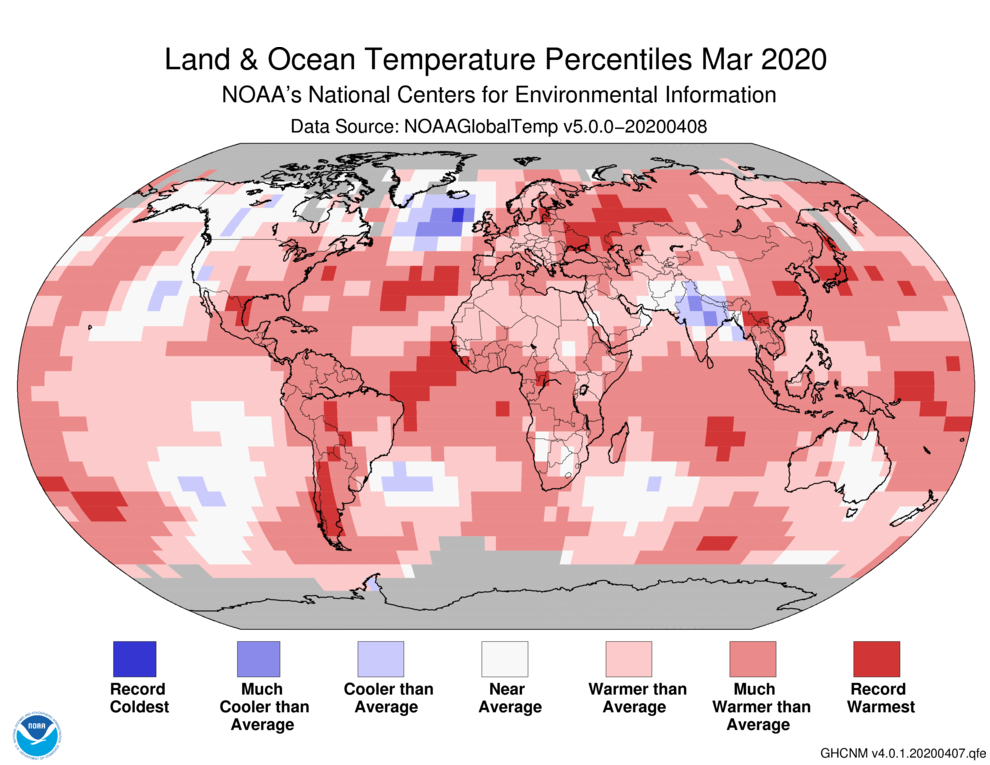 The deeper the red, the warmer the water in this illustration from NOAA’s National Environmental Satellite, Data and Information Service.
NOAA


From Bloomberg by Brian K Sullivan

The world’s seas are simmering, with record high temperatures spurring worry among forecasters that the global warming effect may generate a chaotic year of extreme weather ahead.

Parts of the Atlantic, Pacific and Indian Oceans all hit the record books for warmth last month, according to the U.S.
National Centers for Environmental Information.
The high temperatures could offer clues on the ferocity of the Atlantic hurricane season, the eruption of wildfires from the Amazon region to Australia, and whether the record heat and severe thunderstorms raking the southern U.S.
will continue.

In the Gulf of Mexico, where offshore drilling accounts for about 17% of U.S.
oil output, water temperatures were 76.3 degrees Fahrenheit (24.6 Celsius), 1.7 degrees above the long-term average, said Phil Klotzbach at Colorado State University.
If Gulf waters stay warm, it could be the fuel that intensifies any storm that comes that way, Klotzbach said.

“The entire tropical ocean is above average,” said Michelle L’Heureux, a forecaster at the U.S.
Climate Prediction Center.
“And there is a global warming component to that.
It is really amazing when you look at all the tropical oceans and see how warm they are.”

The record warm water in the Gulf of Mexico spilled over into every coastal community along the shoreline with all-time high temperatures on land, said Deke Arndt, chief of the monitoring section at the National Centers for Environmental Information in Asheville, North Carolina.
Florida recorded its warmest March on record, and Miami reached 93 degrees Wednesday, a record for the date and 10 degrees above normal, according to the National Weather Service.

While coronavirus has the nation’s attenton right now, global warming continues to be a threat.
Sea water “remembers and holds onto heat” better than the atmosphere, Arndt said.

A NOAA satellite infrared map of the Western Hemisphere displays heat radiating off of clouds and the surface of the earth, captured by GOES East (GOES-16) on April 20, 2020 at approximately noon EST.
NOAA

Overall, the five warmest years in the world’s seas, as measured by modern instruments, have occurred over just the last half-dozen or so years.
It’s “definitely climate-change related,” said Jennifer Francis, a senior scientist at the Woods Hole Research Center in Massachusetts.
“Oceans are absorbing about 90% of the heat trapped by extra greenhouse gases.”

The first of Colorado State’s 2020 storm reports, led by Klotzbach, forecast this year that eight hurricanes could spin out of the Atlantic with an above-average chance at least one will make landfall in the U.S.
during the six-month season starting June 1.
The U.S.
is set to issue its hurricane forecast next month.
Arctic Systems

The searing global temperatures this year can also be traced back to intense climate systems around the Arctic that bottled up much of that region’s cold, preventing it from spilling south into temperate regions.
Combined with global warming, this was a one-two punch for sea temperatures that’s brought them to historic highs.

One of the best-known examples of how oceans drive global weather patterns is the development of the climate system known as El Nino.
It occurs when unusually warm waters in the equatorial Pacific interact with the atmosphere to alter weather patterns worldwide.
In the Atlantic, for instance, El Ninos can cause severe wind shear that can break up developing storms with the potential to become dangerous hurricanes.

This year, the chance of an El Nino developing is small, and scientists are theorizing one reason could be that climate change is warming all the world’s oceans.
El Nino “depends on contrasts, as well as absolute values of sea-surface temperatures,” according to Kevin Trenberth, a scientist at the National Center for Atmospheric Research.
Strengthening Their Fury

Meanwhile, if the Atlantic stays warm through the six-month storm season that starts June 1, the tropical systems can use it as fuel to strengthen their fury.
In 2017, a small storm called Harvey actually fell apart as it crossed Mexico’s Yucatan Peninsula into the Gulf, but once it got there it reformed and grew into a Category 4 monster that went on to flood Texas, killing at least 68 people, and caused about $125 billion in damage.

If the Gulf stays record warm “then it raises the risk of another Harvey type storm perhaps,” Trenberth said.

The oceans also play a role in setting the stage for wildfires.
In the case of Australia and the Amazon, really warm areas of the ocean can pull rain away from the land, causing drier conditions and, in extreme cases, drought.
Last year, for instance, the Indian Ocean was really warm off Africa, so that is where all the storms went.
Australia was left high and dry.

Back in the Atlantic, research by Katia Fernandes, a geosciences professor at the University of Arkansas, has also shown a correlation between sea surface temperatures in the northern tropical Atlantic and drought and wildfires in the Amazon.
The warmer the water, the further north rainfall is pulled across South America.

According to the Fernandes model, even Atlantic temperatures in March can serve to predict if the Amazon will be dry and susceptible to fires.

For California, the outlook isn’t as clear.
Wildfires there depend as much on how well vegetation grows, providing fuel for the flames, as it does on the weather conditions coming off the Pacific.

“Tricky question,” said Mike Anderson, California state climatologist.
“Our weather outcomes are influenced by sea-surface temperatures in the Pacific, but it depends on where and when the warm waters appear and how long they persist.
In the end we have a highly variable climate that doesn’t map in a statistically convenient way to patterns of sea-surface temperatures.”