All over the map: Forgotten giant of science who named Seattle’s Fauntleroy neighborhood

This 1869 nautical chart shows Fauntleroy Cove in what’s now West Seattle; it was named in 1856 or 1857 by surveyor George Davidson for Robert H. Fauntleroy of Indiana, his mentor and the late father of his future wife.
(NOAA Archives) 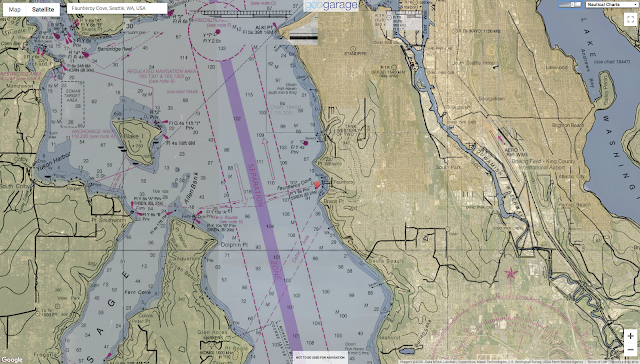 With the West Seattle Bridge now closed, you can’t really get to Seattle’s Fauntleroy neighborhood and the Vashon-Southworth ferry very easily anymore.

But maybe – OK, it’s a longshot – you can find solace in knowing who Fauntleroy was named after, and about the forgotten giant of science who actually chose that name more than 150 years ago.

Fauntleroy Cove, where the Vashon ferry dock was first operated in the 1920s, was named in 1856 or 1857 by a U.S. Government surveyor named George Davidson.

A portrait of prolific surveyor and scientist George Davidson from the late 19th century.
(Public Domain)

Davidson was born in England in 1825 and came with his family to Philadelphia as a child.
Before he died in San Francisco in 1911, Davidson was to become one of the most accomplished and prolific scientists, historians and authors on the West Coast in the 19th and early 20th centuries.
By some measures, he was the DaVinci or Thomas Jefferson of the West Coast.

But where did the Fauntleroy name come from?

In the 1840s, Robert H. Fauntleroy was George Davidson’s colleague, perhaps his first boss, at the U.S. Coast Survey, the government agency that was a precursor to the National Ocean Survey and the U.S. Geological Survey, and that made charts and maps.

Fauntleroy also became a mentor to Davidson, who was then in his early 20s, by doing things like hosting Davidson for long periods of time at the family home in Harmony, Indiana.
In 1850, Robert Fauntleroy died of cholera when he was only 43 or 44 years old.

It was not long after this that George Davidson began a multi-year project to survey and chart the Pacific Coast.
Using information compiled during earlier surveys by Captain George Vancouver in the 1790s and by the U.S. Exploring Expedition in the 1840s, Davidson and his colleagues measured latitude and longitude of prominent points along the coast, and gathered information about the names given to areas by Natives as well as European visitors.

These government-funded projects were designed to facilitate commerce by making navigation safer, and thus Davidson also accomplished other important tasks along the way, such as choosing locations for lighthouses, buoys, and other navigation aids.

As part of this work, Davidson purchased a ship in 1854 in San Francisco on behalf of the government, and named it the R.H. Fauntleroy.

It was just a few years later, when his work brought him to the waters of what was then Washington Territory, that Davidson named Fauntleroy Cove in what’s now West Seattle, and also named the “Fauntleroy Peaks” in the Olympic Mountains: Mount Constance, Mount Ellinor, and The Brothers.

The names for those peaks, not surprisingly, come from Robert Fauntleroy’s four children (the real-life brothers were named Edward and Albert).
What is also probably not surprising, then, is that George Davidson married Ellinor Fauntleroy, daughter of his late mentor, in October 1858.

Along with the cove and the peaks, the name “Fauntleroy” was also attached for awhile to what’s now Lincoln Park, just north of the ferry terminal.

The “Lincoln” name had been used for a reservoir on Capitol Hill, as well as the adjoining park area, but that area was renamed “Broadway Playfield” in 1922, and what had been “Fauntleroy Park” was renamed in honor of the Civil War president.

In 1922, what had been Fauntleroy Park was renamed Lincoln Park by the City of Seattle; residents petitioned unsuccessfully to change it back in the 1930s.
(Seattle Municipal Archives)

Newspaper clippings from that time say that the area had been known as “Lincoln Beach” for many years, and that “Lincoln Beach” name does show up as early as 1904 in some real estate ads in the Seattle Times.
Broadway Playfield was renamed Cal Anderson Park in 2003.

In 1934, West Seattle residents petitioned the City of Seattle’s Parks Board to rename the park for Fauntleroy, but the effort did not succeed.
That same year, a “Golden-Rain” tree from the Fauntleroy family home in Indiana was planted for Arbor Day near the Lincoln Park gate.

It was still there in the late 1980s when Seattle tree expert and author Arthur Lee Jacobson wrote the first edition of his book Trees of Seattle, though Jacobson reported Thursday that the original 1934 tree is no longer standing.

And it was trees – lots and lots of trees sacrificed for paper pulp – that enabled George Davidson to make one more lasting contribution.

In addition to the nautical charts his team surveyed and drew that helped foster safety and expanded trade and commerce, Davidson created a one-of-a-kind resource that remains of immeasurable cultural value.

The ferry Klahanie served the Fauntleroy-Vashon run in the 1950s.
(Washington State Archives)

Beginning in the 1850s, Davidson compiled research and began to publish, through the U.S.
Coast Survey, detailed descriptions of headlands and harbors and other geographic features.

In the 1850s, US government surveyor George Davidson named Olympic peaks – Mount Ellinor, Mount Constance and The Brothers – for his future wife Ellinor Fauntleroy and her sister Constance, and her brothers Edward and Albert.

This was so that mariners might be better prepared as they traveled from port to port, especially if they were making their first visit.
The idea was that this written material would serve as a supplement, and an early form of maritime guidebook to be used along with the nautical charts.

The first version of Davidson’s work was published in 1855 as part of the agency’s regular annual report.
That section was called “Directory for the Pacific Coast.” 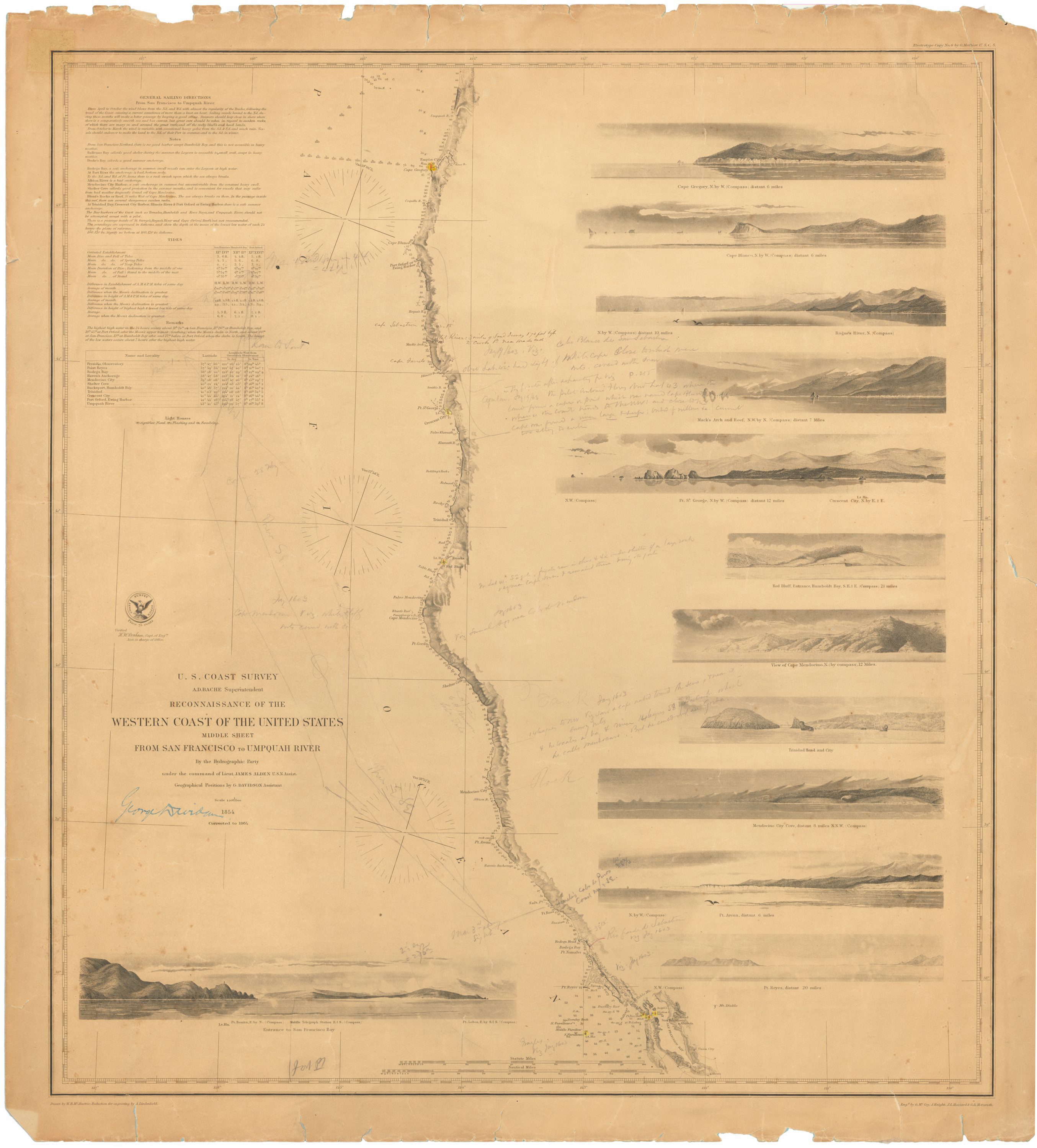 By 1869, the material warranted publication as its own separate volume.
It was renamed “Coast Pilot for California, Oregon and Washington Territory,” and it came to be an indispensable asset for West Coast mariners.
The same was true for Alaska, as Davidson produced similar works for that area, which had only been recently acquired by the United States.

Ultimately, the effort to update and expand the “Coast Pilot” for California, Oregon and Washington became a pursuit that took up much of Davidson’s “spare” time – in addition to his multiple other scientific pursuits – and culminated in the mammoth 1889 edition.

That 1889 volume is a real doorstop, coming in at almost 900 pages.
It reads like an explorer’s log book, with details about the culture and history of many places along the coast – which isn’t surprising, given how much Davidson studied (and later wrote about) the early West Coast explorers.

Davidson spent nearly 10 years working on the 1889 edition of the Coast Pilot on his own time, and the resulting book is an often overlooked masterpiece of West Coast history.

Unfortunately for scholars – but perhaps fortunately for sailors who probably didn’t need a multi-pound encyclopedia – subsequent editions of the Coast Pilot would be trimmed of most of the historical and cultural material that made the 1889 edition such a treasure.

But, to Davidson’s credit, the government expanded the Coast Pilot program to cover all American waters, and Coast Pilots are still published (and updated regularly) by the National Oceanic and Atmospheric Administration.