﻿﻿Microbes point the way to shipwrecks 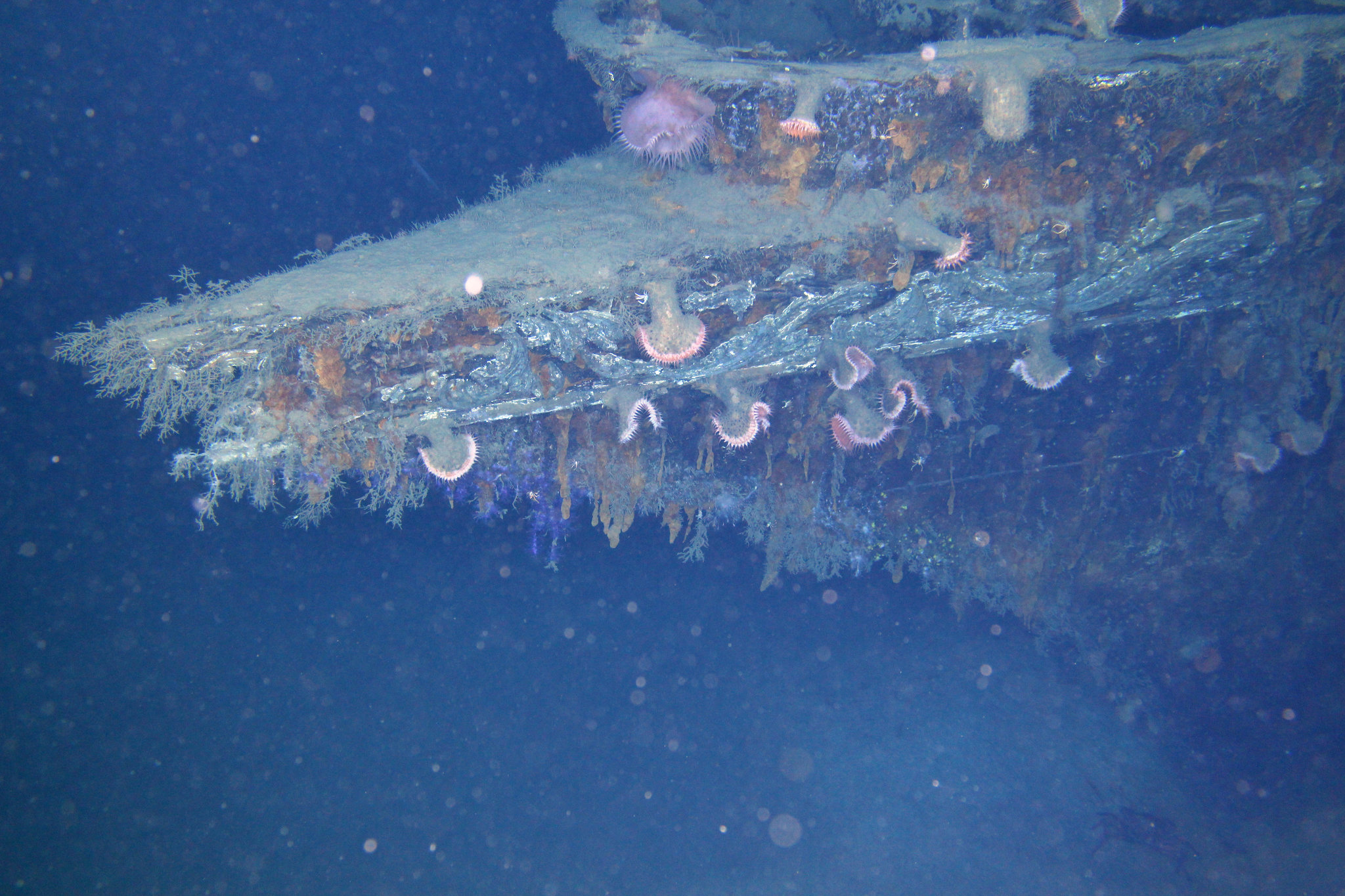 Marine organisms colonizing the bow of a yacht called Anona, which sank in the Gulf of Mexico in 1944.
Credit : Deep Sea Systems International's Global Explorer ROV and the Bureau of Ocean Energy Management.

Distinct microbiomes flourish around sunken ships as they become artificial reefs, new research in the Gulf of Mexico reveals.

Off the coast of Mississippi, under 4,000 feet of water, a luxury yacht is slowly disintegrating.
Marine creatures dart, cling and scuttle near the hull of the wreck, which has been lying undisturbed for 75 years.

But there’s more than meets the eye when it comes to this shipwreck and others, researchers have now shown — distinct assemblages of microbes inhabit the seafloor surrounding these structures, helping to turn shipwreck sites into artificial reefs rich in life.

Shipwrecks are trespassers on the bottom of the ocean, human-made structures decidedly out of their element.
But a wreck’s intrusion gradually becomes welcome as various forms of marine life seek refuge among the steel and wood.

The macroscopic animals that inhabit shipwrecks are only there thanks to much smaller forms of life, said Leila Hamdan, a marine microbial ecologist at the University of Southern Mississippi.

That’s because microbes like bacteria and archaea coat surfaces in a sticky layer, a biofilm, that functions as a chemical and physical come-hither call for larger creatures such as barnacles and coral, Dr. Hamdan said.
“A shipwreck can never become an artificial reef unless the microorganisms are there first.”

Her team is researching how the presence of a shipwreck affects microbial communities.
This field of research, shipwreck microbial ecology, is a niche area of study that spans archaeology, biology, ecology and marine science, she said.
“As far as we know, we’re the only ones doing it right now.”

In September 2018, Dr. Hamdan and her colleagues departed from Gulfport, Miss., aboard the research vessel Point Sur.
Roughly 70 miles off the coast, the team lowered a remotely operated vehicle called Odysseus into the 80-degree water.
Within 45 minutes, Odysseus’ seven thrusters had propelled it to the seafloor.
There, it began emitting sonar pings to locate Anona, a shipwreck first discovered in the 1990s that the team knew was nearby. 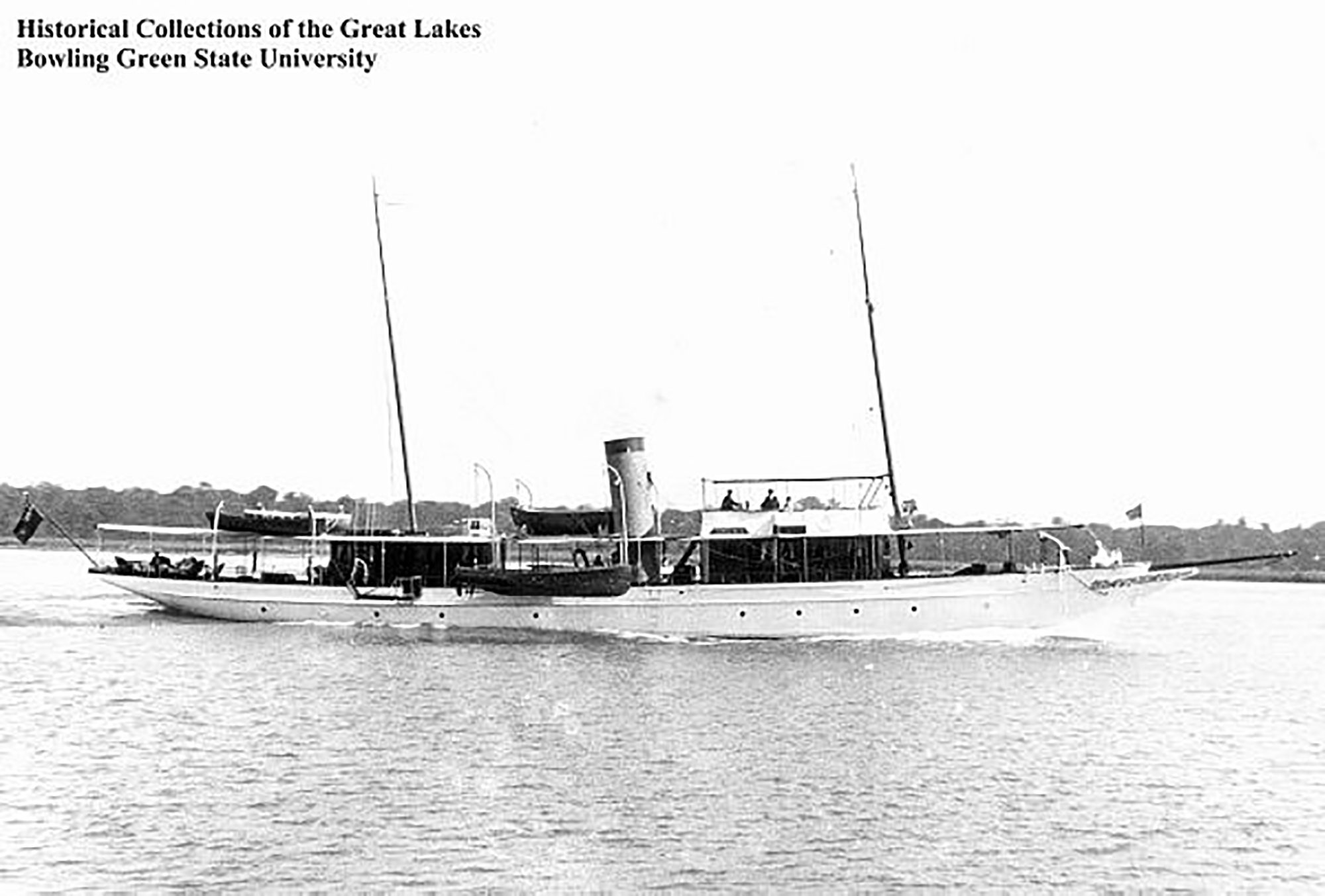 Built for a Detroit industrialist in 1904, Anona was a 117-foot long yacht, with a steel hull.
A research team has been exploring the microbes and organisms that now inhabit Anona’s remains on the seafloor, where the shipwreck was discovered in the 1990s.
Credit...Bowling Green State University

The 117-foot yacht, built in the early 20th century for a Detroit industrialist, was once sumptuously appointed in mahogany and teak, with a social hall that featured a piano.
It sank in 1944, when the steel plates beneath its engines buckled during a voyage to the British West Indies.
(The structural failure sent the crew of nine scrambling into a raft, and they drifted for two days before being rescued.) Anona fell to the seafloor upright and intact, its bow pointing toward Cuba.

Dr. Hamdan and her colleagues directed Odysseus around the shipwreck.
The remotely operated vehicle, about the size of a small car, carried a payload of clear plastic tubes.
At predetermined distances from the shipwreck — ranging from about 300 to seven feet — one of the vehicle’s robotic arms plunged a tube the size of a water bottle into the fine gray sediment of the seafloor.
The team collected cores off the yacht’s bow, starboard side and port side.
(On previous research cruises, the team had collected cores as far away as 3,300 feet, including ones off Anona’s stern.)

In June and July of last year, the team conducted similar fieldwork at two other shipwreck sites that they discovered in the Gulf of Mexico.
Based on the shapes of the wooden sailing vessels and the artifacts found nearby, the ships were most likely built in the 19th century.
Like Anona, both vessels were upright and intact.
One rested in relatively shallow water, about 1,700 feet, and the other lay beneath more than 5,900 feet of water.

Back in the laboratory, the team extracted microbial DNA from the cores and sequenced the genetic material.
“We look both at who is present and what their abundance is,” Dr. Hamdan said.

The researchers found the largest diversity of microbes — several hundred types — roughly 160 to 330 feet away from Anona.
That makes sense based on the age of the shipwreck, Dr.
Hamdan said, since the structure is providing resources to microbes.
“Those resources begin to spread over time, and with the resource follows the microbes.”

The team also discovered that the seafloor’s microbiome varied with distance from Anona.
That’s something that had not been demonstrated before, Dr.
Hamdan said.
“A shipwreck sitting on the deep ocean floor is materially changing the biodiversity of the seabed.” 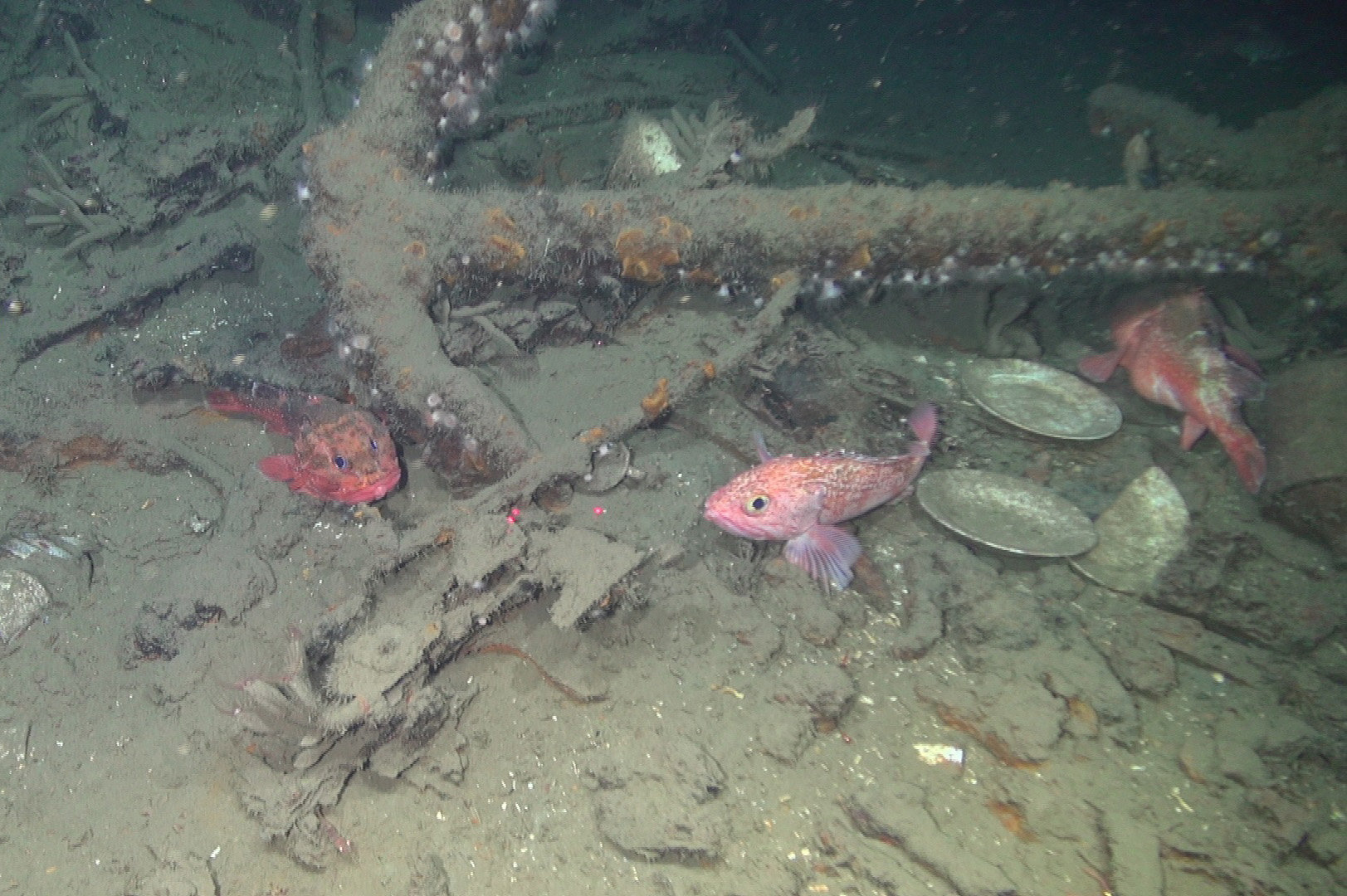 An anchor and some ceramic dishes were among the artifacts near the hull of a shipwreck.
Credit...Pelagic Research Service’s Odysseus ROV and the National Oceanic and Atmospheric Administration.

Near the wooden sailing vessels, the scientists found bacteria that degrade cellulose and hemicellulose, some of the primary components of wood.
“That gives us an idea that maybe they’re feeding on the shipwreck,” said Justyna Hampel, a biogeochemist at the University of Southern Mississippi who led the analysis of the two new shipwreck sites.

Because there is no light and only limited sources of energy in deep water, survival “defies the normal routes of life,” Dr. Hampel said.

The microbiomes of the two newly discovered shipwrecks are also distinct from each other, the team showed, which raises the question of whether water depth plays a role in dictating microbial communities.

It’s unknown whether these microbes were transported to the seafloor or they were there all along and conditions simply became conducive to their flourishing after a ship sank.
“That’s the million-dollar question in microbial ecology,” Dr. Hamdan said.

In support of the second idea, there’s a theory that “everything is everywhere, but the environment selects,” she added.
As an example, it’s entirely possible that an individual spore of bubonic plague is sitting on my desk right now, she said.
“It’s just there, waiting for the right conditions.” Similarly, shipwrecks create a new environment that is hospitable to some microbes but inhospitable to others, she said.

Dr. Hamdan’s students are doing experiments on the seafloor to investigate where the microbes came from, and where they go when they leave shipwrecks.

These results were presented this week at the Ocean Sciences Meeting in San Diego.

Magnificent ecosystems exist around shipwrecks, said Andrew Davies, a marine biologist at the University of Rhode Island who was not involved in the research.
But it’s been largely unknown how these artificial structures affect the surrounding seafloor, he said, so it’s good to see studies like this that are focused on “habitats of opportunity.”

In the future, Dr. Hamdan and her colleagues plan to study microbial communities around other shipwrecks.
There are plenty of possibilities — more than 2,000 shipwrecks in the Gulf of Mexico, she said.
“We absolutely need to go to more sites.”