Image of the week : cloud streets over the Labrador Sea 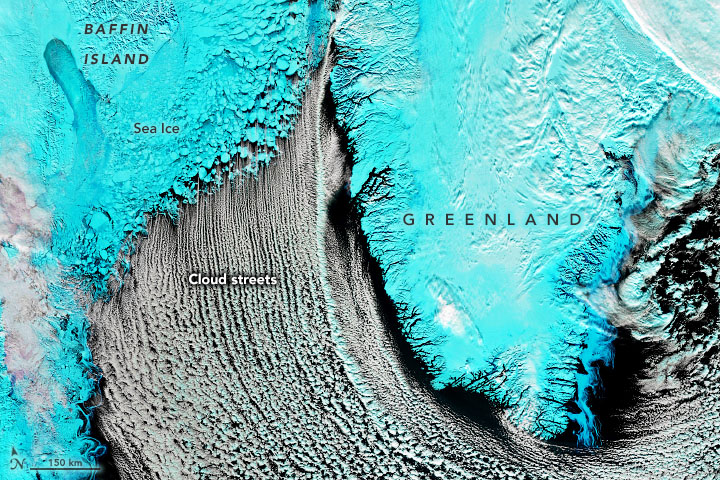 As sea ice in far northern latitudes approached its annual maximum extent, the Visible Infrared Imaging Radiometer Suite (VIIRS) on the Suomi NPP satellite acquired this false-color image of the Labrador Sea on March 2, 2020.
Chunks of sea ice hugged the coast of Baffin Island, while cloud streets streamed over the sea.

With this combination of visible and infrared light (bands M11-I2-I1), snow and ice appear light blue, and clouds are white.
The orientation of the cloud streets indicate that strong, cold winds were blowing from north to south.
As the cold air moved over the comparatively warm ocean water, the air warmed and picked up the moisture needed to form cumulus clouds.

On March 2, 2020, GOES-16 (GOES-East) spotted ribbon-shaped cloud streets streaming over the Labrador Sea from the sea ice edge in the Davis Strait.
As frigid air moves over relatively warmer water, the warmer air rises, bringing moisture with it.
As it cools, it gradually condenses and sinks in rows of horizontal counterclockwise-rotating air cylinders that line up with the prevailing direction of the wind.
As that wind sweeps around the southern tip of Greenland, the clouds are blown in a new direction, losing their “streamer” shape.
The Advanced Baseline Imager (ABI) on NOAA’s GOES-16 (GOES-East) geostationary satellite also acquired imagery of the cloud streets on March 2, 2020.
Imagery credit: CIRA/NOAA

Cloud streets form when columns of heated air—thermals—rise through the atmosphere and carry heat away from the sea surface.
The moist air rises until it hits a warmer air layer (a temperature inversion) that acts like a lid.
The inversion causes the rising thermals to roll over on themselves, forming parallel cylinders of rotating air.
On the upward side of the cylinders (rising air), water vapor condenses and forms clouds. Along the downward side (descending air), skies remain clear.
Arctic ice normally reaches its annual maximum extent in mid or late March.
Sea ice extent this winter has been below average, according to tracking charts published by the National Snow & Ice Data Center.
Posted by geogarage at 1:27 AM