The World Magnetic Model 2020 (WMM2020) was released December 2019 and can be downloaded.
The file contains the necessary coefficients to upload into systems that require the update.
A full report with more information about the WMM and this update will be published by NOAA's National Center for Environmental Information on their website in early 2020.
The WMM is a joint product of the United States' National Geospatial-Intelligence Agency and the United Kingdom's Defence Geographic Centre developed jointly by the National Centers for Environmental Information and the British Geological Survey.
The WMM is the standard model used by DoD, NATO, and IHO for a wide range of positional and navigation systems. WMM2020 is valid from December 10, 2019 through December 31, 2024.

“With the 2020 update to the WMM, we’ve provided significantly better guidance to navigators regarding blackout zones so they know where they can trust their compass and where they should not,” said Mike Paniccia, a geodetic earth scientist and NGA’s WMM program manager.

A compass becomes increasingly unreliable as it gets closer to Earth’s magnetic poles, so NGA has released a new set of blackout zones to aid navigators near the poles.
NGA included shape files of these small regions near the Poles in the WMM 2020 release, so the information can be automatically loaded into navigational systems.
“The Earth’s magnetic field lines become vertical as you approach the poles, so if you were to stand on the magnetic north pole, your compass needle would be trying to break out of your compass and point vertically,” said Paniccia.
“Where this vertical intensity starts to overwhelm the horizontal intensity is where we have drawn the new blackout zones. This gives navigators a clear picture of where on Earth it is safe to trust a compass.”

A compass becomes increasingly unreliable when navigating closer to Earth’s magnetic poles?
The 2020 WMM update displays blackout zones to aid navigators as they near the poles, which can be automatically loaded into navigational systems, providing more precise navigational data for all military and civilian planes, ships, submarines and GPS units.

The WMM is necessary because the Earth’s geographic and magnetic poles do not align, so geomagnetic models like the WMM correct for this difference. 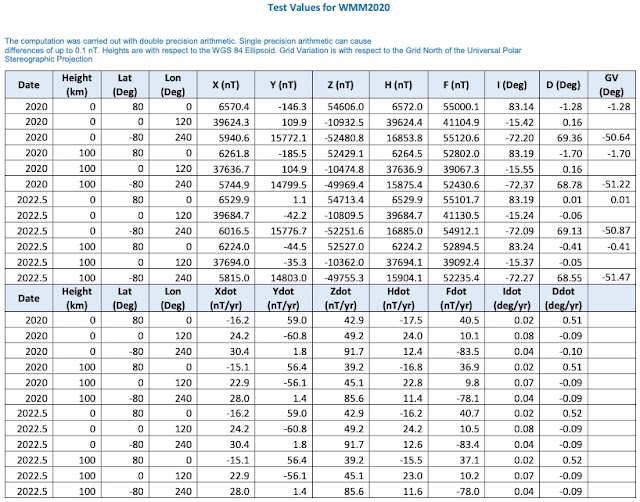 As the Earth’s magnetic field is constantly changing, the difference between geographic and magnetic north also changes, requiring the WMM to be updated every years or as necessary.
If you use GPS to navigate or have ever flown on an airplane, you’re reliant on the World Magnetic Model, said Paniccia.​
Posted by geogarage at 12:24 PM