Marooned: Researchers will freeze their ship into Arctic Ocean ice for a year

From Scientific American by Shannon Hall

Every autumn the Arctic undergoes a radical metamorphosis.
As the sun dips below the horizon one last time—not to rise again until spring—the icy seascape darkens, the temperatures plummet, and the sea ice swells into a brutal fortress, so thick that no icebreaker can penetrate it.
Research vessels flee south, desperate to avoid getting trapped during the fearsome season.
But this year scientists—and a few lucky journalists, including me—will dare to do just the opposite.

In late September we will set sail from Tromsø, Norway, heading east along Siberia, then north toward the North Pole.
Our captain will steer us into a massive ice floe and kill the ship’s engines—dooming it to freeze in place as the ice quickly thickens.
The ship will remain entombed for a full year as we float in the clutches of the Arctic Ocean.

The goal of the mission, called MOSAiC (Multidisciplinary Drifting Observatory for the Study of Arctic Climate), is to better understand why the top of the world is warming at such an alarming rate—twice as fast as lower latitudes.
“The Arctic is the epicenter of global warming,” says Markus Rex, a climate scientist at the Alfred Wegener Institute in Germany and MOSAiC coordinator.
Yet researchers do not completely understand why.
This $150-million mission—the first to study the central Arctic over an entire year—intends to change that situation. 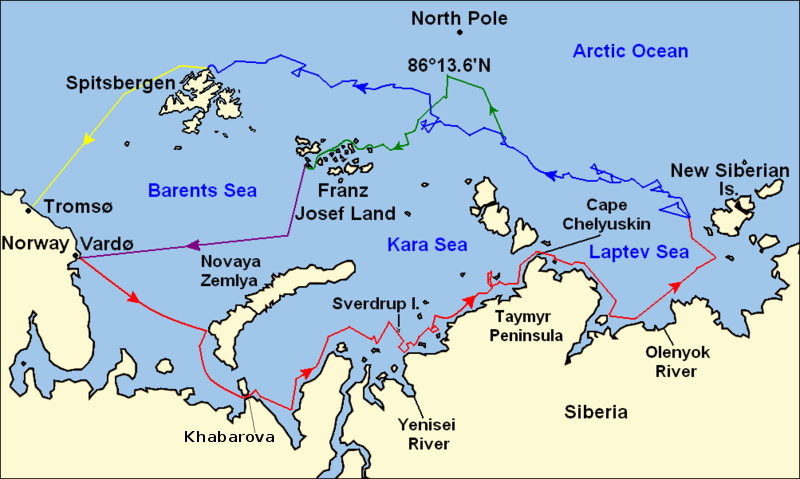 A few intrepid adventurers have attempted such a fate, only to falter.
In 1893 Norwegian explorer Fridtjof Nansen fastened his ship, the Fram, into the ice in the hope that it would carry him toward the North Pole.
But when it became clear he would never reach the pole, he abandoned the mission and skied hundreds of miles to land.
Still, the Fram made it across the Arctic ice cap intact, eventually reaching the open North Atlantic Ocean.
“We’re following in the footsteps of giants, if you will,” says Matthew Shupe, an atmospheric and oceanic scientist at the University of Colorado Boulder and the National Oceanic and Atmospheric Administration who conceived the MOSAiC mission more than 10 years ago.

Photograph taken on 14 March 1895 as Nansen prepares to leave his ship Fram and begin his sledge journey to the North Pole.

This excursion will be, by far, the largest in history.
At any one time, around 60 scientific personnel will be working onboard the research icebreaker Polarstern; they will be shuttled back and forth by sea, when possible, or air.
In all, some 300 people from across the world will have conducted studies on the ice.
They will observe every aspect of the Arctic system: the wandering ice, the drifting snow, the swirling ocean, the breezy atmosphere, the life that calls it home and the ways these attributes interact. 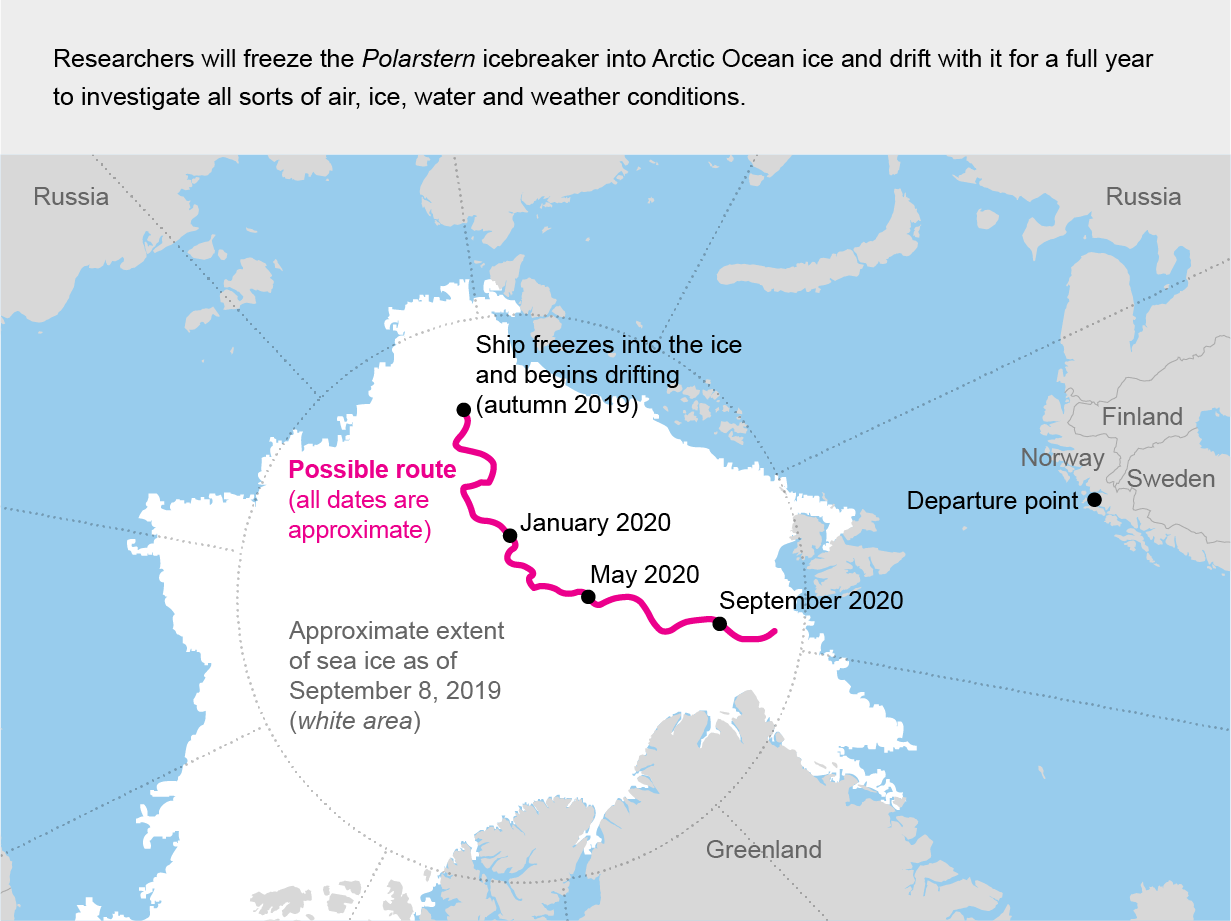 But first, scientists will have to find the perfect ice floe.
Although it is easy to imagine the Arctic ice cap as a fixed mass of thick ice, it is actually a mosaic of smaller ice floes that jostle about—bulldozing into one another, slipping under one another and breaking apart.
Navigators will scout for an ice floe that is both young and sturdy.
It is crucial to choose the right slab that can carry the Polarstern across the central Arctic Ocean.

To pinpoint the best starting point, Thomas Krumpen, a climate scientist at the Alfred Wegener Institute, pored over 13 years of ice-floe data and discovered researchers would need to entrap the ship within an ice floe at roughly 85 degrees north latitude and 130 degrees east longitude, with a target date in October [see illustration].
Over a year, the floe should carry the ship north over the pole and then south to open water between Greenland and the archipelago of Svalbard, roughly 1,000 miles away from where it began.
At least, that is the hope.
The path could vary with the icy ocean’s whim, carrying scientists toward Russian waters (where they would need a special permit to collect data), toward the Canadian coast (where the ice is thick, old and less scientifically interesting) or dead north (where medical evacuations become more difficult).
“We have to be able to adapt our plans at any given time during the expedition,” Rex says.

The icebreaker Polarstern, seen here operating in Antarctica in 2013, is being prepared to be locked into Arctic sea ice for more than a year.
Alfred Wegener Institute / Stefan Hendricks
Ground truth

Mission leaders find the potential rewards well worth the risk.
“It’s really a rare opportunity to have a big interdisciplinary experiment that will be there for the full year,” says Donald Perovich, an engineering professor at Dartmouth College, who has done plenty of fieldwork in the central Arctic but only for short stints.
“What’s nice about that is that it’s a chance to watch the whole movie.”
Before, scientists mostly observed the region for short snippets—typically during summer.
Seeing an entire annual cycle of the sea ice might finally allow researchers better understand the dynamics that have forced the Arctic to warm at such a fantastic rate, a process known as Arctic amplification.

One example of these dynamics is the amount of ice.
As reflective ice melts and gives way to open ocean, the dark water absorbs more sunlight, which melts the ice around it even faster in a vicious cycle that accelerates warming.
Now that the ice has thinned, it melts earlier in the spring and perpetuates the issue.
Yet any measurements of ice thickness have high uncertainties.
Satellites can easily chart the amount of sea-ice cover in the Arctic Ocean, which in July 2019 was a whopping 726,000 square miles below average.
That picture is only two-dimensional, however.
To gather three-dimensional data, a few new satellites have special radars that can measure ice thickness.
But they often get confused by snow on top of the ice, leading to a thickness error of as much as 1.6 feet.
MOSAiC scientists will be able to measure ice thickness at the same time satellites sweep overhead.
By comparing the data, they can calibrate the satellite measurements, improving estimates for years to come.

Other cycles that work together to accelerate warming, and some that actually decelerate it, are certainly at play.
Heat is likely transported up from lower latitudes.
Clouds act as an umbrella to shade the ice from the sun in the winter and a blanket to warm it in the summer, but scientists are studying whether these effects balance each other in all seasons.
Microbes similarly cling to the sea ice, where they inhale and exhale greenhouse gasses, yet scientists are not sure how their extent or activity may change.
Researchers do not even know how the smallest organisms survive in the middle of winter.
They will study all these factors and more.

Once the Polarstern has frozen in place, researchers will race to set up a constellation of instruments on the deck, the ice next to the ship and different ice floes located more than 30 miles from the vessel—all before polar night settles in.
But even as the sky grows dark, they will continue to monitor the instruments near the ship nonstop and conduct further experiments.
Scientists will release helium balloons to study the weather, drill into the ice to collect samples, fly a fleet of drones to better understand the atmosphere, drop nets through the ice and into the ocean to shed light on the ecosystem, scan the clouds with radar, and more.

It will be a challenge just to pack so many instruments and people onboard a single vessel.
“It’s pretty mind-boggling how we’re all going to fit,” says Brice Loose, an oceanographer at the University of Rhode Island, who will visit the Polarstern later this winter.
“There is still a game of musical chairs being played.”

The findings, which will be publicly available, should create a wealth of data for years to come.
Already teams of scientists are eagerly awaiting the results so they can update their climate models and better forecast our changing world.
One target will be Arctic amplification.
Another will be the polar vortex, which flows from west to east around the Arctic.
A relatively warm Arctic Ocean can weaken the vortex, allowing it to bulge southward and bringing frigid air down into North America and northern Europe—or so many scientists think.
MOSAiC will finally provide the necessary observations to fill in climate-model gaps and better assess this connection.

The voyage will be challenging in many ways.
Everyone onboard will have limited Internet (and no Netflix!).
Their only physical link to the rest of the world will be ships and aircraft scheduled to arrive every few months to restock food and fuel while swapping passengers.
In the winter, scientists will have to perform laborious experiments in the dark, under temperatures that can cause frostbite in mere minutes and with a watchful eye over their shoulder for polar bears—not to mention the possibility of cracks opening within the ice.
There will be no hardware store should an instrument break.
In the summer, researchers will have to contend with the blazing sun, which can burn their eyes, the insides of their nostrils and even the roof of their mouth.

It is no wonder the mission requires that its participants are medically fit.
I will be onboard for the first six weeks—enough time to experience the Polarstern freezing into the ice and report on the instrument setup but a short time as compared with many of the scientists.
Yet I still had to undergo a number of invasive medical tests, during which my primary care doctor looked over my blood work, urine sample, lungs, and heart and asked extensive questions about my medical history.
Scientists who will spend the entire winter drifting by the North Pole have to complete a safety-training course that includes learning how to climb into a floating raft, jump into the frigid water with a survival suit and fight a fire onboard the ship.
Many opted to take a firearms course to learn how to protect themselves against polar bears, even though a perimeter of armed guards will patrol the observatory for those bears every day.
(I will return to Norway onboard a second icebreaker just after polar night has begun.)

The hazards are numerous, but the largest risk just might be weather.
In an earlier project in 1997 called the Surface Heat Budget of the Arctic Ocean, which took place in the lower Arctic, scientists on a research icebreaker endured horrific wind storms.
One shattered the ice floe into pieces.
“People were taking rowboats to get from one site to the next,” Perovich says.
The region soon froze over, but when a second wind storm hit, the slabs of ice that were previously separated crunched together to form ridges, one of which boosted a garage full of snowmobiles 12 feet into the air.
About 100 scientists raced onto the ice to save it, with only a single snowmobile casualty.
Should a similar storm hit MOSAiC, researchers will have to protect the instruments as best they can and potentially find a new ice floe.

Still, researchers are pushed onward—both by a haste to understand the Arctic and by an adventurous glee.
BeforeI started reporting for our trip, I pictured the Arctic as a desolate wasteland—one that would take a grave toll on my psyche.
But when I ask Perovich what it was like to live onboard the icebreaker in 1997, he responds with a childlike euphoria that eases my worries.
“It is its own wonderland,” he says.
“There were no trees, but there were pressure ridges.
There were no flowers, but there were melt ponds of every shade of blue you can possibly imagine.
There were no dogs or cats, but there were polar bears and seals.
It was just a very rich environment.”