One year into the mission, autonomous ocean robots set a record in survey of Antarctic ice shelf 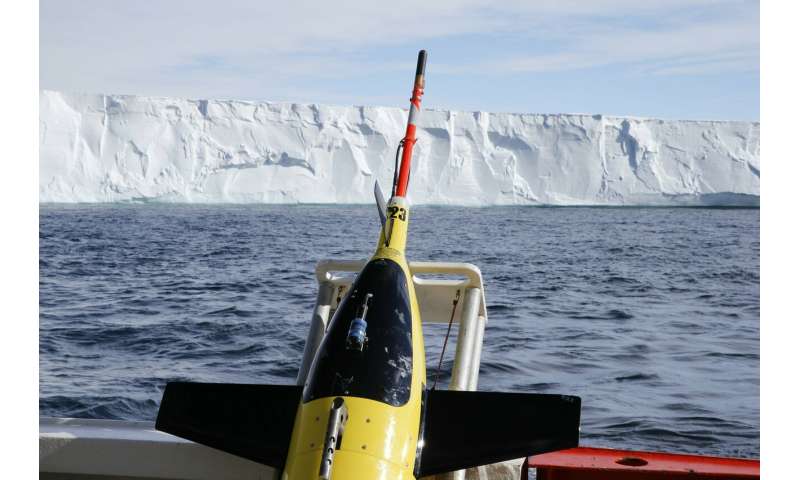 A Seaglider, with the Getz Ice Shelf in the background, being prepared for deployment in January 2018 under the neighboring Dotson Ice Shelf.
Credit: Jason Gobat/University of Washington

From Phys by Hanah Hickey

A team of ocean robots deployed in January 2018 have, over the past year, been the first self-guided ocean robots to successfully travel under an ice sheet and return to report long-term observations.

Beyond mere survival, the robotic mission—a partnership between the University of Washington's College of the Environment, the UW Applied Physics Laboratory, the Lamont-Doherty Earth Observatory of Columbia University, the Korean Polar Research Institute and Paul G. Allen Family Foundation—has ventured 18 times under the ice shelf, repeatedly reaching more than 40 kilometers (25 miles) into the cavity, among the farthest trips yet into this treacherous environment.

"This is the first time any of the modern, long-endurance platforms have made sustained measurements under an ice shelf," said Craig Lee, a UW professor of oceanography and member of the Applied Physics Laboratory.
"We made extensive measurements inside the cavity.
Gliders were able to navigate at will to survey the cavity interior, while floats rode ocean currents to access the cavity interior.

"It's a major step forward," Lee added.
"This is the first time we've been able to maintain a persistent presence over the span of an entire year."

The project funded by Paul G. Allen Family Foundation seeks to demonstrate the technology and gather more data from the underside of ice shelves that are buttressing the much larger ice sheets.
Direct observations of how warmer seawater interacts with the underside of ice shelves would improve models of ice sheet dynamics in Antarctica and Greenland, which hold the biggest unknowns for global sea level rise 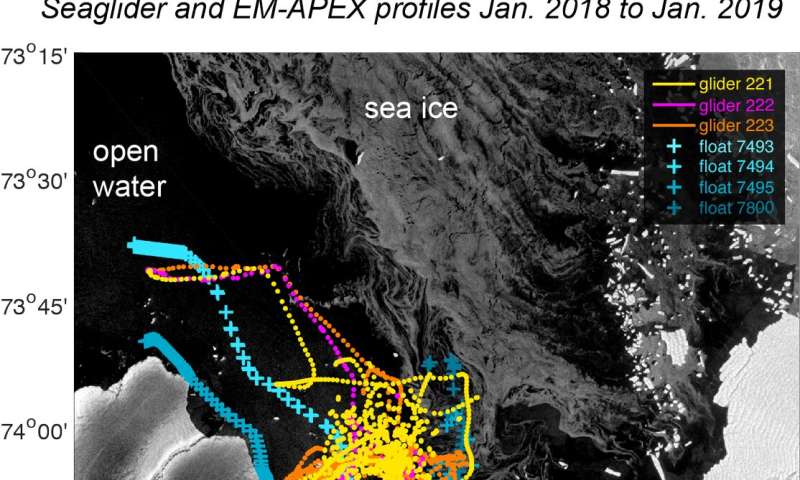 Some ice sheets terminate in large ice shelves that float out over the ocean, and those act as a buttress," Lee said.
"If the ice shelves collapse or weaken, due to oceanic melting, for example, the ice sheets behind them may accelerate toward the sea, increasing the rate of sea level rise."

"Most of the uncertainty in global sea level rise predictions for decades to centuries is from ice sheets, which could contribute from 1 foot to as much as 6 feet by 2100," said Pierre Dutrieux, a research professor of oceanography at the Lamont-Doherty Earth Observatory.
"A key driver is interaction with the ocean heat and these new tools open tantalizing perspectives to improve on current understanding."

The mission set out in late 2017 to test a new approach for gathering data under an ice shelf, and on Jan. 24, 2018, devices were dropped from the Korean icebreaker R/V Araon.
This week, two self-navigating Seagliders reached the milestone of one year of continuous operation around and under the ice shelf.

Robot submarines operated by the British Antarctic Survey, known as Autosub3 and Boaty McBoatface, successfully completed 24- to 48-hour voyages in 2009, 2014 and 2018.
These missions surveyed similar distances into the cavity but sampled over shorter periods due to the need for a ship support. 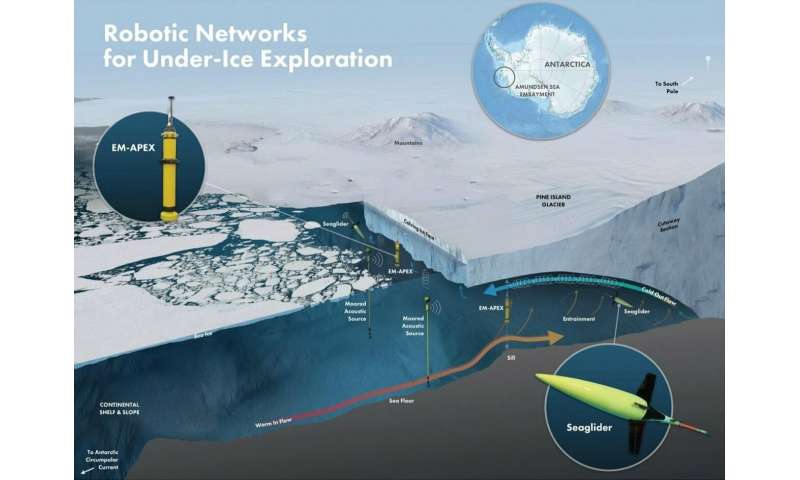 This sketch shows how three self-driving Seagliders and four drifting floats tracked conditions below an Antarctic ice shelf.
Inside these caves, warmer saltwater flows in on the bottom, carrying heat which may eat away at the ice, and fresher glacial meltwater flows out above.
Credit: University of Washington

By contrast, the U.S.-based team's technology features smaller, lighter devices that can operate on their own for more than a year without any ship support.
The group's experimental technique first moored three acoustic beacons to the seafloor to allow navigation under the ice shelf.
It then sent three Seagliders, swimming robots developed and built at the UW, to use preprogrammed navigation systems to travel under the ice shelf to collect data.

The mission also deployed four UW-developed EM-APEX floating instruments that drift with the currents at preselected depths above the bottom, or below the top of the cavity, while periodically bobbing up and down to collect more data.
All four of these drifting instruments successfully traveled deep under the ice shelf with the heavier, saltier water near the seafloor.
Three were flushed out with fresh meltwater near the top of the ice cavity about six to eight weeks later.
One float remained under for much longer, only to reappear Jan. 5.

During the past year, the fleet of robots has reached several milestones:
Researchers are now analyzing the data for future publication, to better understand how seawater interacts with the ice shelves and improve models of ice sheet behavior. 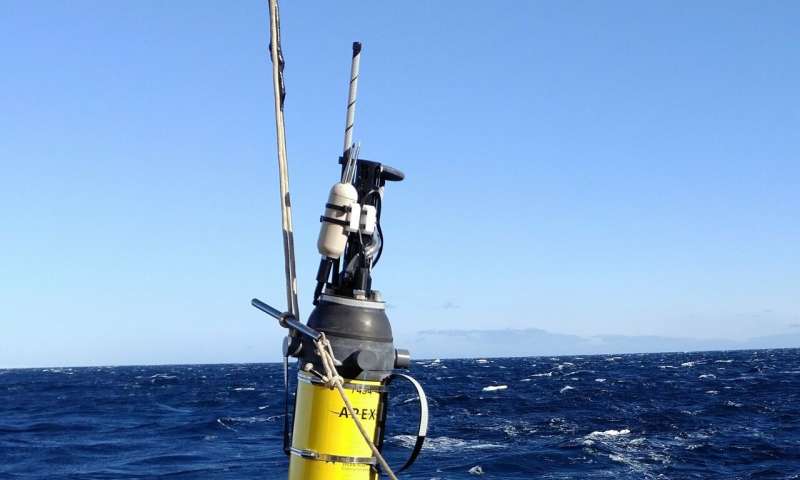 A drifting robot known as an Electro-Magnetic Autonomous Profiling Explorer, or EM-APEX, is lowered into the ocean.
This is one of four floats that traveled with currents under the Dotson Ice Shelf.
Credit: Paul G. Allen Family Foundation

Four months of data show three Seagliders dropped from the ship in late January, then traveling toward the Dotson Ice Shelf (white).
Two Seagliders (pink and orange) venture under the ice sheet in summer, while a third (yellow) samples along the face.
The gliders then spend the colder months sampling along the ice sheet’s edge.
Meanwhile, the drifting floats are dropped closer to the ice edge in late February.
The teal tracks show how they drift under the ice sheet and then get flushed out in late March.
A fourth float drifted to the right of this image, reaching a neighboring ice sheet.
Credit: University of Washington