Technical failures have been identified as the immediate cause of 7.9% of maritime accidents analysed in a study spanning more than 600 incidents over 15 years.

The study by the Seafarers International Research Centre (SIRC) at Cardiff University looked at 693 accident investigation reports from the UK, Australia, the US, New Zealand, Germany and Denmark between 2002 and 2016.

Numbers of accident investigation reports by country of origin

It placed inadequate risk management as the leading cause of accidents, representing the immediate cause in 17% of cases and a contributory cause in 27.1%.

Technology featured prominently in accident reports, with technical failures the sixth most frequent immediate cause.
But ineffective use of technology was a bigger concern, noted as either an immediate or contributory cause in 115 cases (16.6%) compared to just 80 cases (11.5%) for technical failures.

As an example of a technical failure, the report cited the engineroom fire on board anchor handling tug/supply vessel Maersk Master in 2008.
The water mist system did not start automatically (because of inappropriate placement of smoke and heat detectors) and could not be engaged immediately by using the control panel by the engineroom entrance. 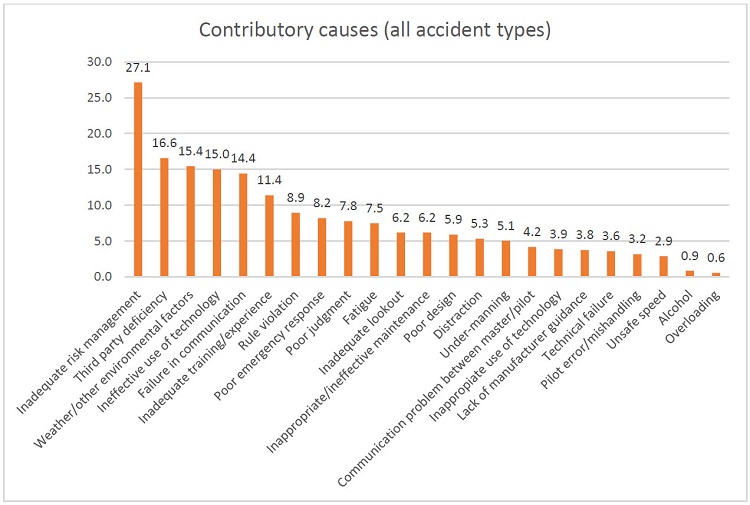 When Spirent took part in the STAVOG project to analyse the impact of GPS disruption on sea vessels, it found low-level interference could degrade signals, causing positioning readings to be out by up to 270 metres.

An inappropriate use of technology was highlighted as a cause of the collision between general cargo vessels Francisca and RMS Bremen in 2014.
The officers on watch on both vessels failed to verify GPS positions, which were in fact false as the result of a technical fault, by means of another system (such as radar) or by sight.

Other noteworthy causes include inadequate training or experience (a factor in 16.3% of cases), inappropriate or ineffective maintenance (12.1%), poor design (10.9%) and lack of manufacturer guidance (4.2%).