Growing numbers of bluefin tuna are being seen in the waters around the UK because of the warming impact of a long term ocean current say researchers.

These large, speedy fish are a globally endangered species and almost disappeared from the UK around 40 years ago.
Scientists say that their recent rise is connected to the Atlantic Multidecadal Oscillation (AMO).
Now in a warm phase, the current makes UK waters more hospitable for the fish.

Bluefin tuna are one of the largest and fastest fish on the planet - they can weigh up to 900kg and can travel at speeds of up to 70 kilometres per hour (43mph). 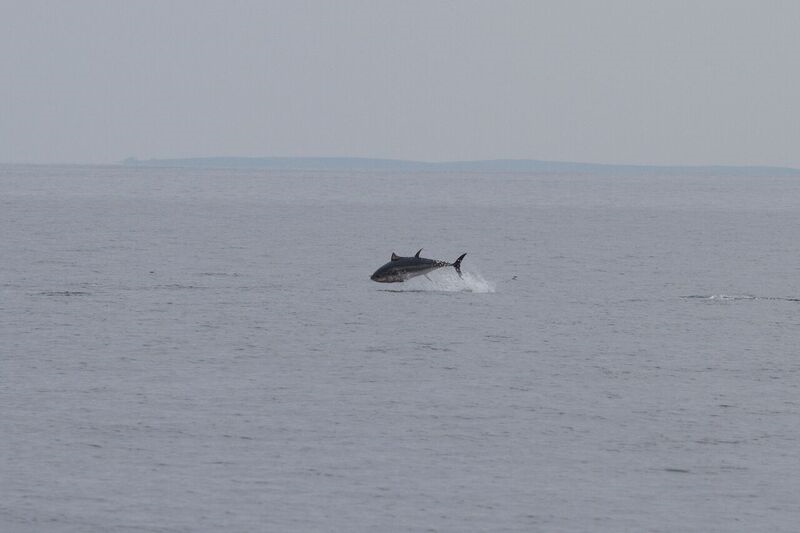 In the 1930s, the species was a common sight in the seas off Scarborough and was highly prized by big-game fishers.

Read more at: https://inews.co.uk/news/uk/bluefin-tuna-returns-british-irish-waters-fishing-ban-lifted/
However, from the 1940s, the species began to decline and by the early 1990s had all but disappeared.
But over the past five years or so, sightings of the warm blooded fish have increased off the UK once again with many of these encounters captured on social media.

This situation has been mirrored in the Nordic seas, in the waters between Greenland and Norway which witnessed a spectacular collapse in tuna numbers in the 1960s, when the fish declined dramatically in just two years.

Ensemble reconstructions of long-term fluctuations in Atlantic bluefin tuna abundance.
(A and C) Historical records (black line) and predicted long-term fluctuations in abundance (averaged prediction as an orange line with 5 and 95% confidence intervals as gray shading) calculated from (A) 1634–1929 (preindustrial tuna fishery period) with no lag and (C) with a one-generation lag (16 years). (B and D) Mean relative influence [and associated SD (standard deviation)] of the four hydroclimatic variables used to reconstruct bluefin tuna abundance.

Researchers now believe that the warming and cooling impact of the long term current, the Atlantic Multidecadal Oscillation is key to the ebb and flow of the species.
The scientists' new paper has been published in the journal Science Advances.
The team looked at the changing abundance and distribution of bluefin tuna in the Atlantic over the past 200 years.
They've concluded that the major factor influencing the movement of bluefin is the AMO.
"The ecological effects of the AMO have long been overlooked and our results represent a breakthrough in understanding the history of bluefin tuna in the North Atlantic," said lead author Dr Robin Faillettaz from the University of Lille.
He believes that while current numbers of sightings of the UK may indicate that the species is doing well, this may not be the case everywhere.
"When water temperature increases during a positive AMO, bluefin tuna move further north. However, the most positive (warming) phases of the AMO also have a detrimental effect upon recruitment in the Mediterranean, which is currently the most important spawning ground, and that will affect adult abundance a few years later."
"If the AMO stays in a highly positive phase for several years, we may encounter more bluefin tuna in our waters but the overall population could actually be decreasing."

The Atlantic Multidecadal Oscillation (AMO) is variability occurring over many decades that is expressed in the sea surface temperatures of the North Atlantic.

What is the AMO?

It's a measure of a naturally occurring climate cycle in the North Atlantic that see sea surface temperatures rise and fall over long time periods.

Approximately every 60 to 120 years the AMO switches between positive and negative phases. During positive (warm) phases, Ireland and the UK experience warmer weather but it also brings more hurricanes and drives drought in the US midwest. A cooler AMO can lead to drought in many parts of Africa. 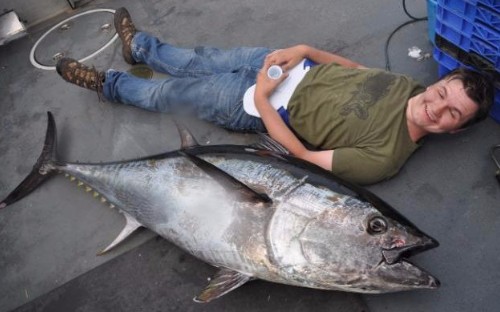 Will tuna fishing be allowed in the UK again?

Right now the fishing of bluefin tuna in British waters is prohibited.
But the recent rise in bluefin numbers has encouraged campaigners to petition the government to allow amateur fishers to catch the endangered species.

The Angling Trust want to establish a "catch and release" licensed fishery which they believe would have enormous economic benefits for areas such as Cornwall.

But the scientists involved with the latest study are cautious about this approach.
"Bluefin tuna have been extensively overfished during the 20th century and the stock was close to its lowest in 1990, a fact that further indicates the recent changes in distribution are most likely environmentally driven rather than due to fisheries management and stock recovery," said co-author Dr Richard Kirby from the Secchi Disk Foundation.
"Before we further exploit bluefin tuna either commercially or recreationally for sport fishing, we should consider whether it would be better to protect them by making the UK's seas a safe space for one of the ocean's most endangered top fish." 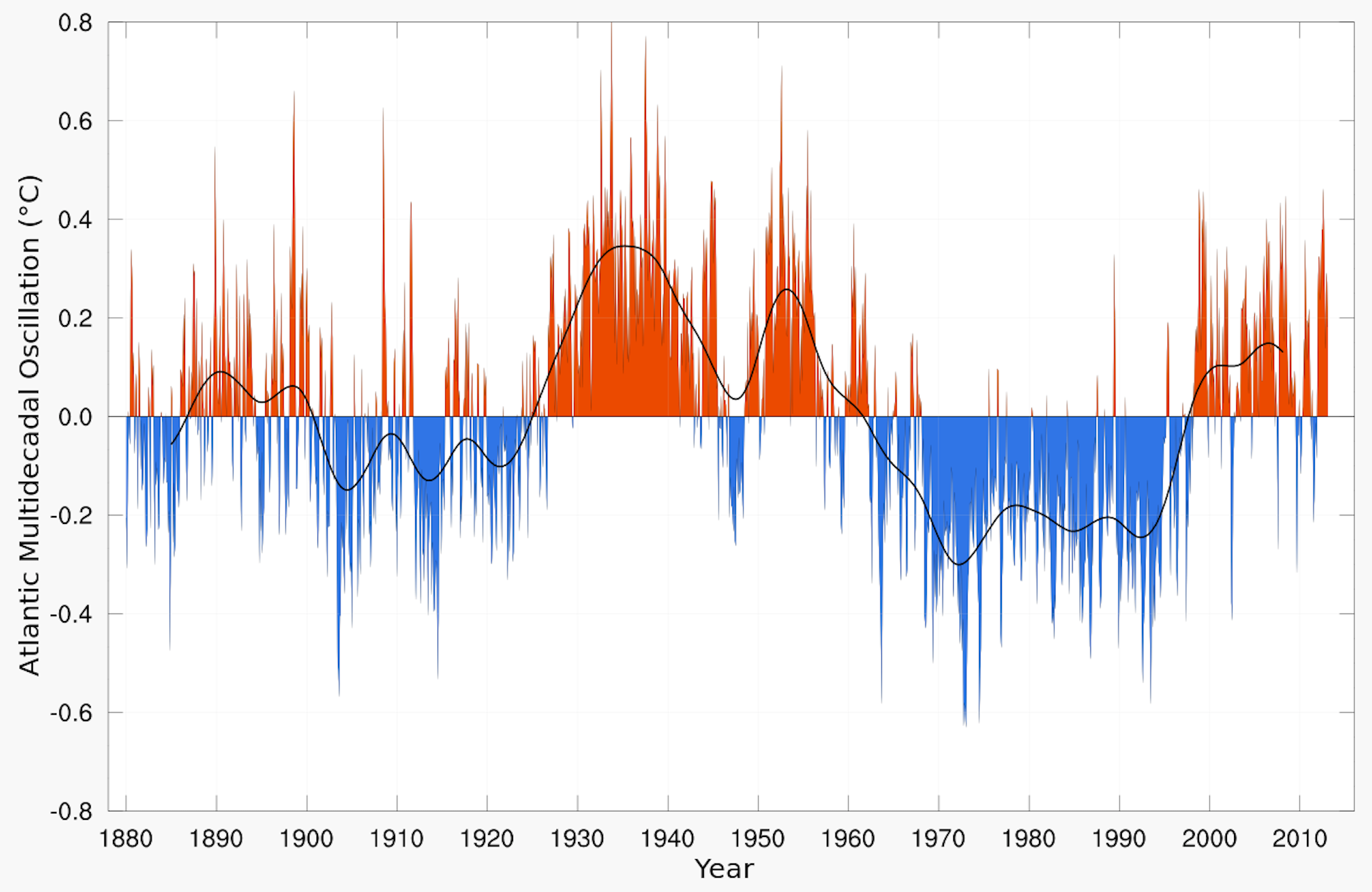 What about climate change?

According to experts, the impact of global warming on top of the AMO is likely to alter the familiar patterns seen in bluefin tuna over several hundred years.
The authors believe that increasing global temperatures may see the species persist for longer in cooler waters around the UK and in the Nordic seas.
It might also cause the fish to disappear from the Mediterranean sea, the world's most important bluefin fishery.