As maritime commercial and recreational traffic increase, accidents become more likely to happen.
To prevent collisions at sea, researchers of the MTCAS project are now making use of a technology originally used in aviation.
MTCAS stands for Maritime Traffic Alert and Collision Avoidance System.
While standard systems only depend on currently observable ship data such as location, direction and speed, the MTCAS algorithm also integrates historical tracking data, planned routes, knowledge bases, external information, an environmental database and navigators in the decision making.
This allows for a dependent, precise warning and clear, misunderstanding free manoeuvres.
Want to learn more about the project?
Visit the following website: OFFIS

The history has shown a continuous increase in year to year accidents at sea.
In the near future, higher traffic density is estimated, which contributes to this increase.
Within the 3-year Project MTCAS, 5 German partners from industry and academia contribute to accident reduction by developing an e-Navigation Assistance System for pro-active, predictive and cooperative collision avoidance. 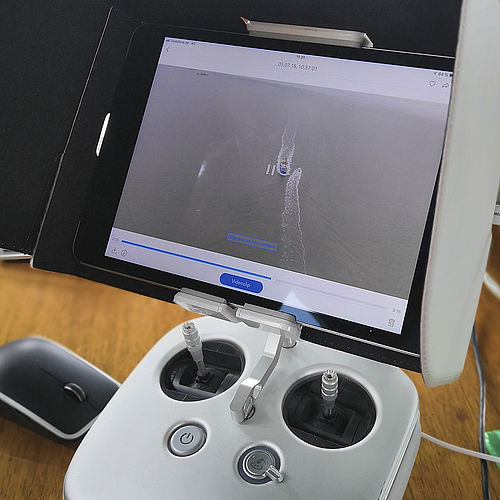 MTCAS is the abbreviation for Maritime Traffic Alert and Collision Avoidance System, which implies the basic idea of adopting the Airborne Collision Avoidance System (ACAS) implementation TCAS.
However, MTCAS broadens its bounds by assisting the ships’ crew in conflict detection and conflict resolution under consideration of a ships holistic environment.
Concrete examples include regularities, bathometry, non-equipped vessels and VTS, which are elaborated in this paper.
Dissident from TCAS, MTCAS does not automatically intervene in terms of issuing steering commands, but supports seafarers in cooperatively finding safe and efficient trajectories, whose onboard implementation avoids collisions.

This paper informs about the activities in the MTCAS project.
We welcome constructive thought and feedback to foster synergies amongst our domain.

Continuous increasing accident risk drives the need for a Maritime Traffic Alert and Collision Avoidance System (MTCAS).
As broadly known, “around 90% of world trading is carried out by the shipping industry” (Chauvin, Lardjane, Morel, Clostermann, & Langard, 2013) the shipping industry has implemented a number of measures aimed at improving its safety level (such as new regulations or new forms of team training and thus shipping can tip the scales of our world’s economy.
The ongoing trend towards an increasing size of new builds, in terms of capacities for cargo and passengers seems to contribute to the magnitude of accident risk: A correlation to an increase in maritime accidents can be perceived from current accident statistics.
Whereas collisions is solely one of six categories in the EMSA accident statistic, at least samples from the categories contacts and groundings, such as beaching, can be accounted to accident preventive actions.

EMSA overview of maritime casualties between 2011 and 2015.

Collision avoidance is a major process on a ship bridge and in Vessel Traffic Services (VTS), where officers, pilots and operators strive towards efficiency and safety of maritime transport.
Therefore classical navigational means are used, which are briefly introduced in this section.

ARPA is a plotting aid, whose functionality includes detection and tracking of foreign vessels.
On modern INS bridges it may be integrated into ECDIS.
For collision avoidance it provides restricted movement predictions, which are based solely on CPA/TCPA, which imply a constant velocity approach.

AIS is a radio system for exchanging navigational and ship data in-between ships and as a means for shore-side surveillance via a VTS-System.
Since enactment of SOLAS continuously commercial fleets have been equipped with this technology, to continuously interchange static and dynamic passage data.
Non-obtrusive shortcomings of AIS are potential misuse through users’ key errors and lag of security, such that the integrity, confidentiality and availability of data is not given.

MMS is according to ITU a “mobile service between coast stations and ship stations, or between ship stations, or between associated on-board communication stations; survival craft stations and emergency position-indicating radio beacon stations …” (ITU, 2012).
The inter-stations communication via voice bears the risk of imprecise situation forwarding amongst participants, since English is the second language for many and language barriers may displayable conveying crucial information.

MTCAS incorporates technologies, which are part of the current state of the art in ship dynamics modelling, trajectory planning, VTS technologies and modern positioning, navigation and timing (PNT).

On a strategic level waypoint planning is part of every voyage plan, which is typically settled pre-departure.
On an operational level ships’ crew executes manoeuvers by adjusting the helm or autopilot, to start a turn.
On the tactical level, decisions are made, that implement the strategy on the operational level.
This is where manoeuvrability and environment can have leverage on operational performance on safety and efficiency.
With evolutionary algorithms, behavioural leaning approaches and/ or neural networks trajectories can be found, which consider ship and environment.
With these techniques, single ship optimal solutions can be found.
To find a global optimum n-trajectory negotiation approaches have recently been developed (Hornauer & Hahn, 2013).

Detection of deviations from anticipated behaviour is implemented in modern VTS-Systems.
The project EfficienSea, and its successors, advance in the area of centralized concepts for sea traffic management.
Times of VTS’s sole availability via MMS will soon be surpassed.
With ongoing activities such as the project COSINUS, VTS-Systems are integrated into automated route exchange amongst ships via a data link.

To exchange trajectories for proficient collision avoidance, instead of routes, precise data is required.
This is not given in nowadays systems, where GPS may induce standard deviation error in positioning and GNSS may negatively influence common timing through interferences.
Resilient PNT encounters these disadvantages with sensor data fusion, which has been demonstrated in project ACCSEAS and MonaLisa.

Whenever collision avoidance as a safety of life critical application should be based on absolute positioning, then the question arises, how resilient provision of PNT data can be achieved onboard a vessel.
Due to the vulnerability of GNSS with respect to ionospheric disturbances, jamming and spoofing the joint usage of other systems (terrestrial backup systems) and other onboard sensors is considered.
Vulnerability encountering backup systems like e-LORAN, R-Mode or absolute RADAR positioning have been evaluated and proposed (Ziebold et al., 2010), (IMO, 2012).
Onboard a vessel a sensor fusion algorithm is responsible for the PNT data provision.
All available Position, Velocity and Timing (PVT) and Navigation data, from onboard sensors in order to provide optimal PNT output data, is integrated.
Asides optimal estimations of the PNT output data, also integrity information is provided, based on accuracy estimations. 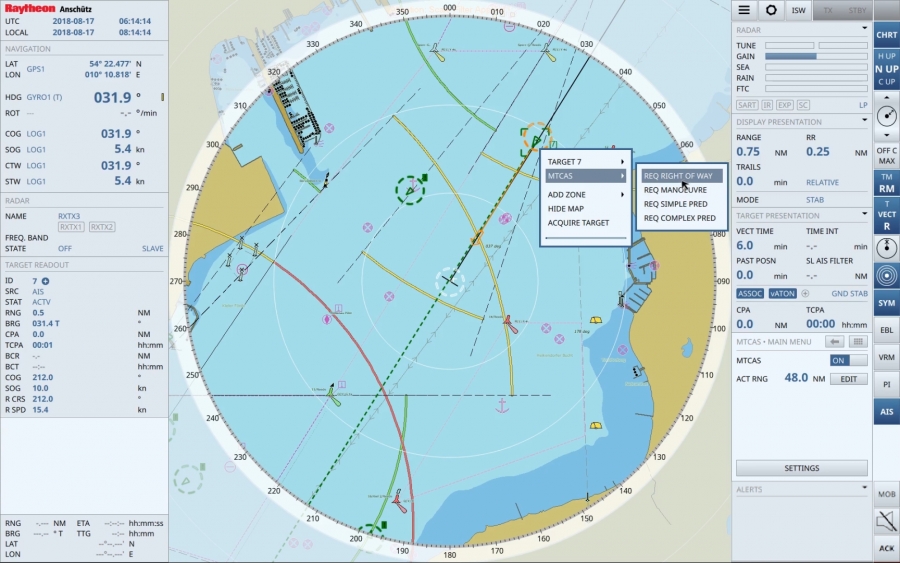 A new COLREG-compliant collision avoidance system developed by the MTCAS project in its first demonstration test in Germany in Wilhelmshaven on September 6th, 2017.

MTCAS assists in collision avoidance by warning the crew before critical situations develop and recommends evasive manoeuvres for conflicting ships.
Dissident from TCAS, MTCAS does not automatically intervene in terms of issuing steering commands, such that it can be seamlessly integrated into nowadays (legally regulated) operations on-board of a ship.
Meanwhile, MTCAS supports seafarers in cooperatively finding safe and efficient trajectories, whose on-board implementation (solely by seafarers) avoids collisions.

MTCAS will be developed on the basis of required equipment and advanced sensor technologies.
Further, within the project, organizational processes around MTCAS are developed and tested, considering responsibilities and interaction of people on board and in VTS.

The development of MTCAS is based on four core concepts:

An essential contribution of MTCAS is enhancing safety and efficiency, by increasing situational awareness about critical traffic situations.
A starting point for MTCAS is the route exchange technology, which has been developed in the COSINUS project, enhancing harmonized situational awareness aboard and ashore.
MTCAS integrates this technology for conflict detection and evasion.
To gain required operational precision the technology will be extended with improved integrity monitoring and exchange of ship dynamics.
Additionally, MTCAS is collecting information about the environment from heterogeneous data sources.
The more information is available, the better is the situation assessment.
When the situation is evaluated, MTCAS will provide the result to the captain and ask for a confirmation.
That happens on all related ships.
MTCAS will submit the confirmation of the captain to all off the other ships.
Therefore, all captains are aware of the situation and know that the others are as well.
MTCAS ensures all captains have the same information about the situation and prevents misunderstandings.

Depending on the current traffic situation and under consideration of ship dynamics as well as information on the route and past motions of the own ship MTCAS predicts ship movements and short term traffic progression.
This incorporates for instance intention prediction, topology of water ways, bathymetry, ships’ destination, rules and regulations and VTS information.
This prediction leads to an enhanced alarm management.
Due to the prediction false alarms are suppressed or corrected.
This decentralized calculation of traffic and manoeuvre predictions (on each ship) is exchanged (Ship2Ship2Shore) and commonly coordinated/adjusted.
Thus a local overview of the situation is enriched to a complete traffic situation overview over time. 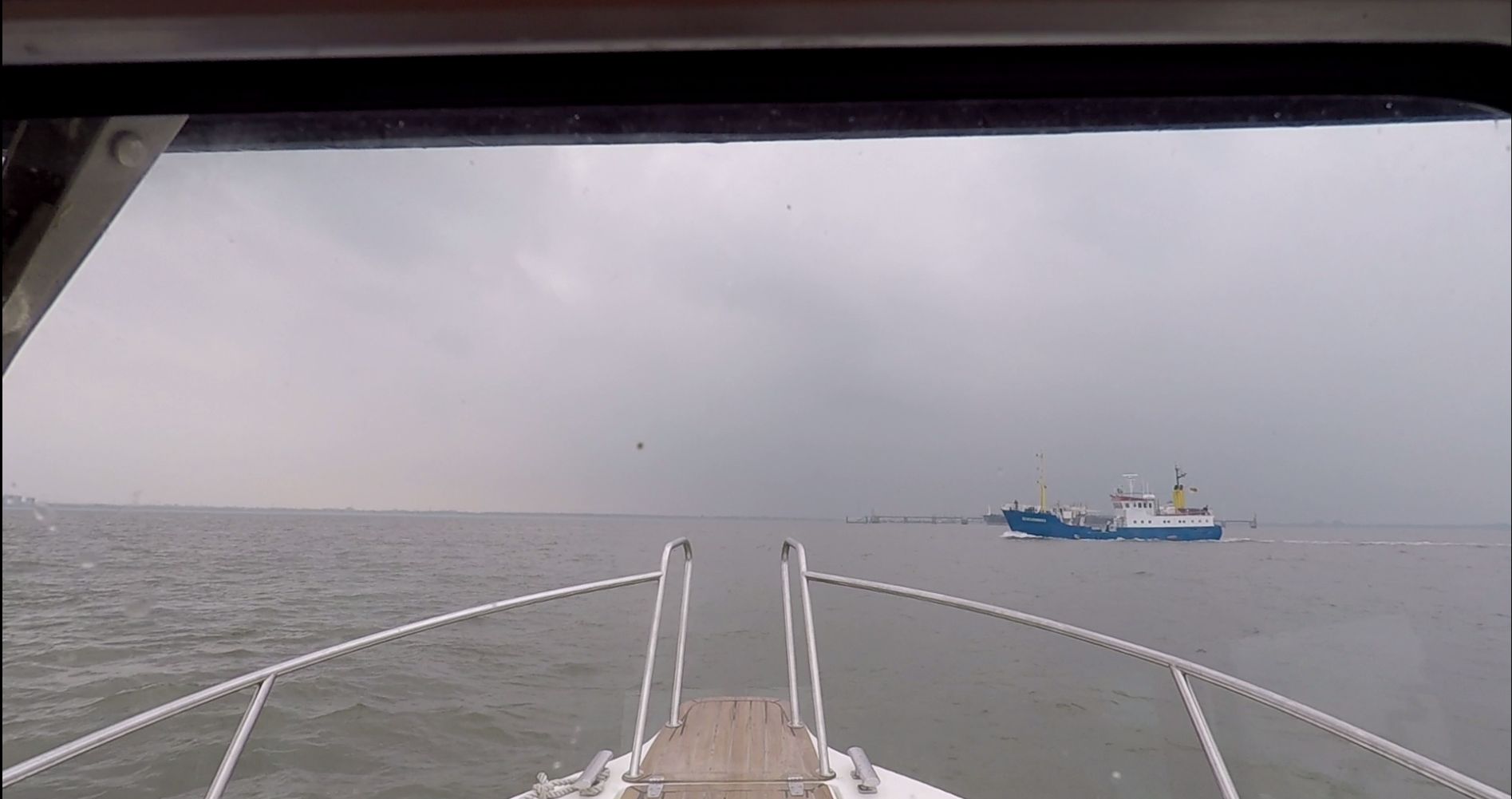 MTCAS aims at on-board and ashore working decentralized conflict detection and at safe and efficient conflict resolution in critical situations.
Ships’ masters agree jointly on a set of evasive trajectories.

Situation awareness is improved through route exchange and context, which improves the prediction of ship movements.
Where today systems would trigger three alarms (left), the context sensitivity of MTCAS allows a detailed operational picture of driving situations (right).

A set of evasive trajectories is therefore always suggested to all ships’ masters, which has to be accepted of declined.
MTCAS will guarantee that evasive trajectories are found within real-time and that the crew can always be aware of and integrated in the conflict resolution process.
Within the project MTCAS’ safety will be proven with qualitative and quantitative means, to secure a gain towards maritime safety.

The two mayor benefits from this project are improved predictive situation awareness and to reduce misunderstandings my supporting the seafarer in consistent situation assessment and evasive manoeuvre planning.