The 15th-century monk who crowdsourced a map of the World

Nat Williams, James and Bettison Treasures Curator at the National Library of Australia, discusses the Fra Mauro Map of the World.
Created by the monk Fra Mauro between 1390-1459, it is one of the most important and famous maps of all time and the crown jewel of the collections of the Biblioteca Nazionale Marciana in Venice.

From Atlas Obscura by Adam Kessler

If you had landed in Venice during the mid-15th century, you might have been accosted by a monk with a prominent nose and baggy, smurf-like hat.
Ignoring your exhaustion and atrocious body odor after a long sea journey, he would have dragged you to a nearby tavern and cross-examined you about your travels.
What was the weather like?
What kind of precious gems were mined?
What animals did you encounter, and how many heads did they have?


Map of the world by Venetian monk Fra Mauro.
The image shows a reproduction made by W. Fraser made in 1806.
The map is orientated with south at the top.

The Fra Mauro map, inverted according to the modern North-South orientation.

The monk was Fra Mauro, a 15th-century version of Google Earth.
Famous for his cartographic skills, he had been commissioned by King Alfonso of Portugal to produce a map of the world.

The Portuguese were eager explorers and wealthy clients, and in the days before satellite imagery, Venice was a cartographers’ heaven.
Arab traders and world explorers passed through the port, giving Fra Mauro an incomparable source of gossip and tall tales about the world.
The fall of Constantinople, occurring a few years before the map was finished, would also have provided a rich source of well-traveled refugees, presumably willing to swap their stories for some bread or beer.

Crowdsourcing a map had never been easier, and Fra Mauro took full advantage.
He interrogated these travelers with an inquisitiveness verging on belligerence, cross-checking their tales against the extensive library in his monastery in the Venice lagoon.
He used their information to draw the map itself and pepper it with almost 3,000 annotations. 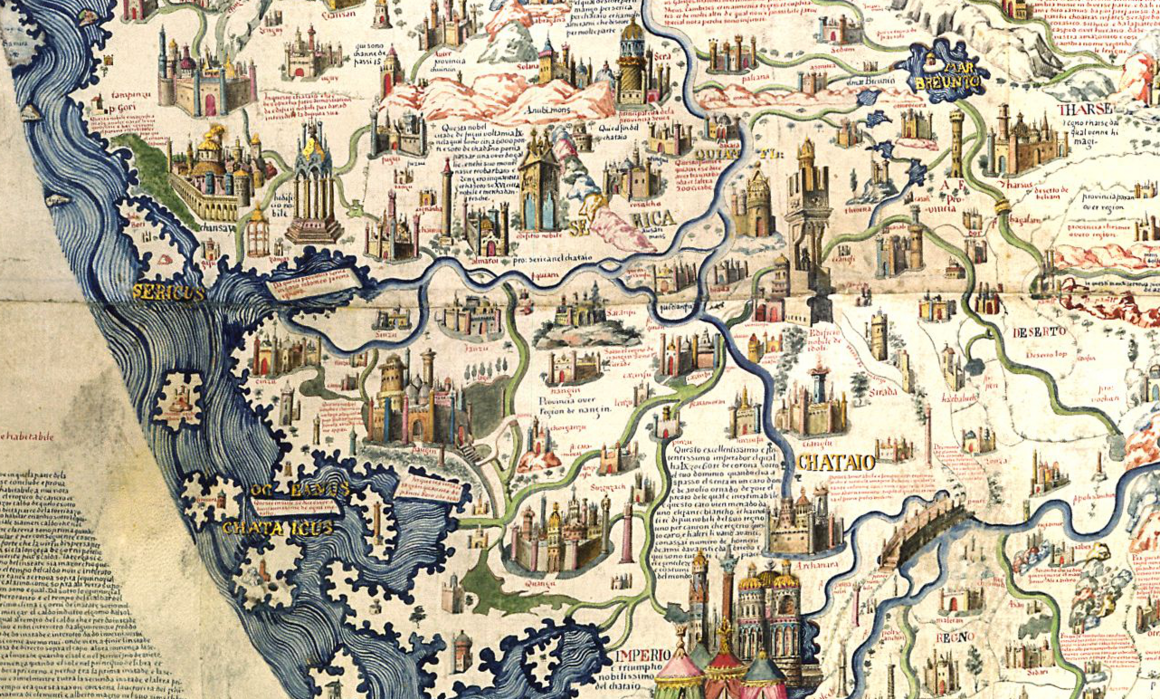 Some of the thousands of annotations on the map.

Fra Mauro loved a good story, and his map is packed with pictures of amber, rubies, pearls, diamonds, manna, and “other notable things”.
He was also fascinated by exotic animals and practices. Seven-headed serpents roam the province of Malabar in India, troglodytes run wild in East Africa, and the Barents Sea near Norway harbors fish that can “puncture the ships with a spike they have on their backs”.

More exotic treasures include a lake on an island in the Indian Ocean that can turn iron into gold.
In the accompanying annotation, Fra Mauro hastily explained that he didn’t believe a word of this story, and included it “just to do justice to the testimony of many people.”
Given that he repeated this particular tale in three different places and drew a spectacular gold lake in the middle of the Andaman Islands for good measure, his skepticism seems ambiguous to say the least. 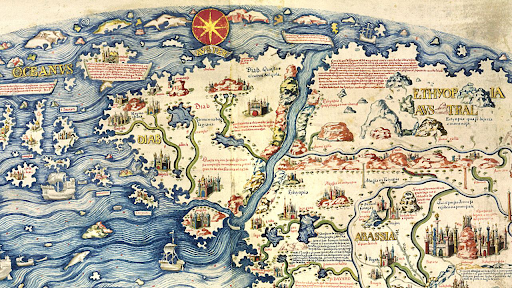 Detail from Fra Mauro's map, a work of unprecedented thoroughness and accuracy.

To modern eyes, the monsters, lakes of honey-wine, and cannibals suggest credulity.
In fact, however, the annotations on the map are full of doubt and skepticism.
In both India and Africa, Fra Mauro gives no credence to the wild tales of “human and animal monsters,” noting that none of the travelers with whom he spoke could confirm the stories.
“I leave research in the matter,” he concluded sarcastically, “to those who are curious about such things.” 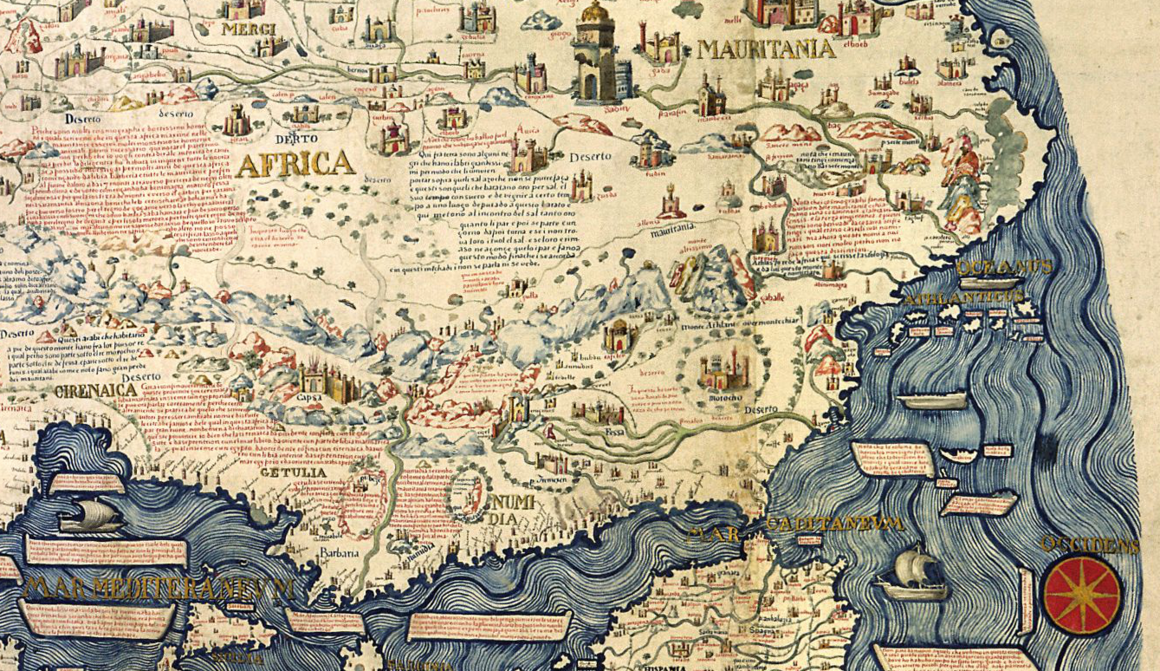 Fra Mauro was also exceptional in his rejection of religious and classical authority.
Europe was not a haven of religious tolerance at the time; the Spanish inquisition started just 20 years after the map was completed.
Mapmakers, consequently, focused on keeping the Church happy rather than worrying about minor geographic details.
Medieval maps showed the location of Noah’s Ark, discussed the depravity of pagans, and illustrated the hideous giants Gog and Magog, lurking in the far North and eagerly awaiting the apocalypse.
Fra Mauro, by contrast, took a rigidly empirical approach.
The Garden of Eden was relegated to a sidebox, not shown in a real geographic location.
He sternly noted that the tradition that the Gog and Magog lived in the Caucasus Mountains “is certainly and clearly mistaken and cannot be upheld in any way,” since plenty of people lived in and traveled to the mountains, and they would have noticed any monstrous giants living nearby. 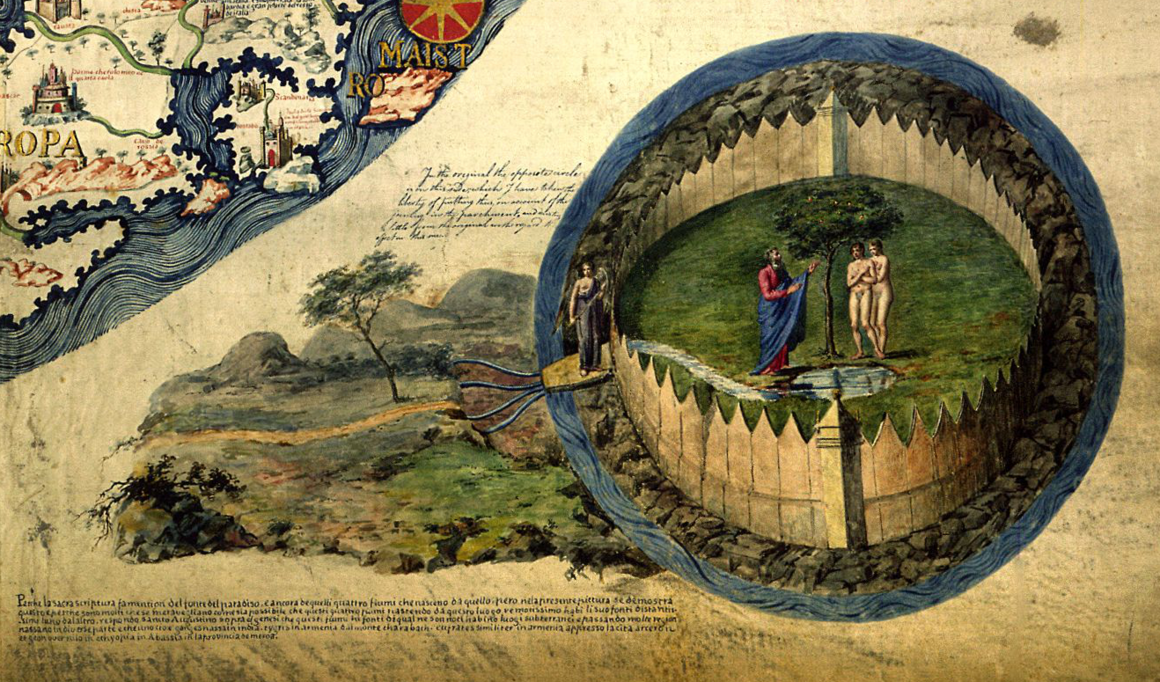 Adam and Eve made an appearance on the bottom-right corner of the map.

Fra Mauro also criticized various classical authorities.
Like a cheeky schoolchild—or a commentator on an online forum—Fra Mauro prefaced his criticism by saying that he didn’t want to seem contrary but couldn’t help it that everyone else was wrong. Ptolemy got the size of Persia wrong, mislabeled Sri Lanka, and didn’t realize that you could sail all the way around Africa.
Regarding the circumference of the Earth, Fra Mauro cited a couple of expert opinions and concluded dismissively that “they are not of much authenticity, since they have not been tested.”
His robust skepticism marked a transition away from medieval traditions towards the intellectual excitement of the Renaissance.

As a result, Fra Mauro’s map was the most accurate ever made at the time.
It wasn’t just his piercingly accurate national stereotypes; the Norwegians were “strong and robust,” while the Scottish were “of easy morals.”
He was the first to depict Japan as an island, and the first European to show that you could sail all the way around Africa.
The latter finding drew on reports from unfortunate traders blown by a storm ‘round South Africa, learning that it was circumnavigable and liberally endowed with 60-foot birds, capable of picking up elephants.
Through depicting the riches, navigation routes, and people around the world, Fra Mauro didn’t just describe terrain, but played a part in encouraging further exploration and analysis, leading up to the famous Age of Exploration and the discovery of the Americas. 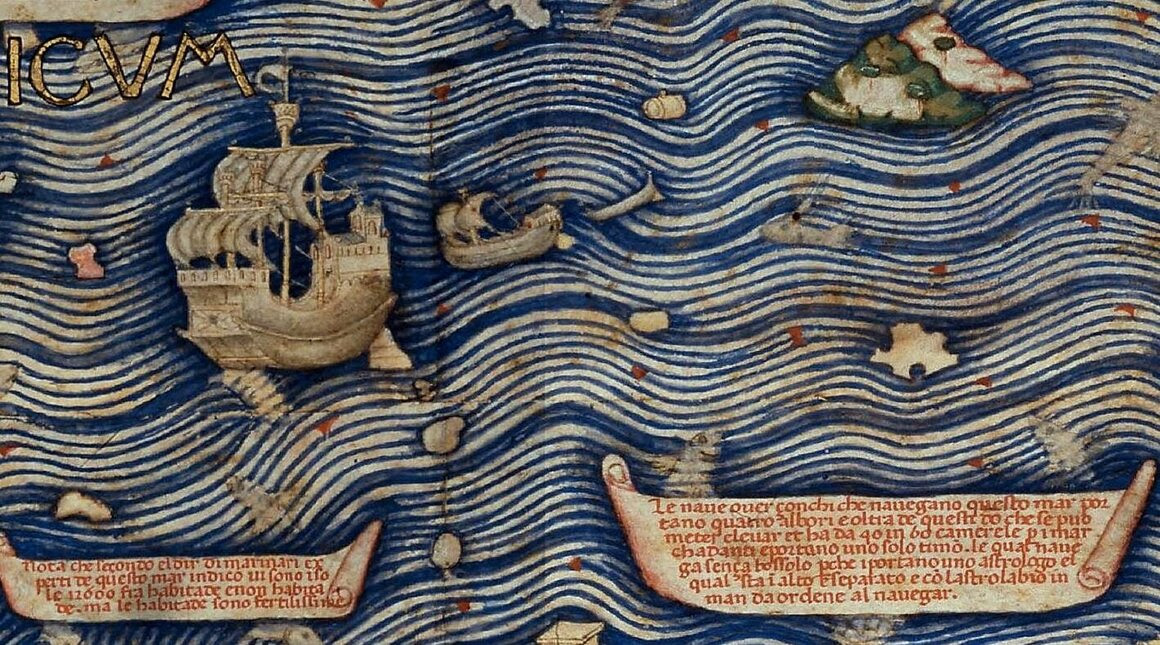 Ships at sea on the map.

Modern interest in Fra Mauro’s map was sparked by Placido Zurla, a monk at the same monastery, who published a lengthy study in 1806.
Since then, it’s been widely recognized that Fra Mauro was way ahead of his time for his accurate geographical knowledge, willingness to challenge authority, and emphasis on empirical observation.

The map is accurate enough to guide researchers to as-yet undiscovered archaeological sites.
For example, Fra Mauro’s contacts in the Ethiopian Church allowed him to map medieval Ethiopia in surprising detail.
He accurately portrayed a number of geographical features; the Awash River, mountain ranges surrounding Addis Ababa, and the Ziquala mountain and monastery (which is still there, 500 years later).
Alongside geographical features, Fra Mauro plotted ancient cities that for centuries scholars assumed never existed.
This assumption is challenged by archaeologists today, who have found unmistakable signs of past habitation in the sites that Fra Mauro indicated.
Although no excavation has started, obsidian shards and pottery pieces litter the landscape, and small walls, old grindstones, and worn foundations are visible under moss and bushes.

If he were alive today, Fra Mauro would probably be disappointed to know that lakes of gold and wine existed just in the imagination of the travelers he interviewed.
He would, however, be happy to know that his map is proving more accurate than skeptical cartographers gave it credit for, and that it still acts as a starting point for research and discovery.