A soft-bodied robot that swims like a manta ray has been engineered to spy on underwater creatures without disturbing them.

From New Scientist by Alice Klein

It’s a drone of the deep.
A soft-bodied robot that swims like a manta ray has been engineered to spy on underwater creatures without disturbing them.
The mostly transparent robot has no motor or other rigid machinery and is much faster than other soft robotic fish.

The goal is to use the robot to explore underwater areas, says Tiefeng Li at Zhejiang University in Hangzhou, China.
It could be used to investigate a submerged ship or plane wreck, or survey coral reefs.
“The soft body will make it easy for the robot to sneak through reefs without damaging them,” he says.

Robots are increasingly being constructed from soft, stretchy materials to make them more resilient and more compatible with living beings.
However, powering them without traditional hard-edged circuit boards and motors is a challenge. 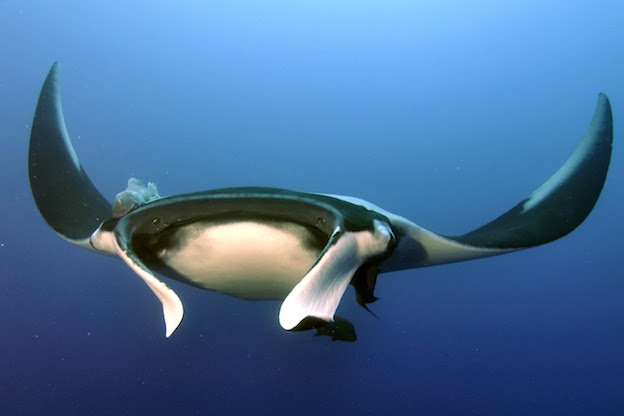 To get around using a motor in the manta-ray-inspired robot, Li and his colleagues made artificial fin muscles from a flexible polymer called dielectric elastomer.
A silicone-encased lithium battery supplies a cyclic voltage that squeezes and releases that material, causing the muscles to bend up and down.
This flaps the ray’s fins, made of a thin silicone film, so that it moves through the water.
The rest of the remotely controlled robot – which weighs 90 grams and has a wing span of 22 centimetres – is made of a silicone body and tail for steering.
All components are transparent, except for the small battery pack and two electromagnets that help to manoeuvre the tail.

At top speed, the robot can swim 6 centimetres per second.
This beats the previous record for soft, untethered underwater robots by 3 centimetres per second, but is still significantly slower than similar-sized fish.
The researchers showed that the electronic ray can tolerate temperatures between 0.4°C and 74°C, swim for 3 hours with a single battery charge, and carry a small video camera to monitor its surroundings.

The flexibility and transparent disguise of the robot ray should allow it to monitor underwater environments without disturbing or damaging them, says Li.
“Ocean creatures will feel more comfortable with it than hard, non-transparent robots,” he says.

The underwater electronics do not pose an electrocution risk to ocean life because the robot’s circuitry is set up so the surrounding water functions as the grounding electrode – the end that dissipates electrical energy.
“This is a very good idea,” says Gursel Alici at the University of Wollongong in Australia.

Although other types of robotic swimmers have been made using soft parts – including ones that mimic octopuses, fish and jellyfish – the manta ray is a unique take on this concept, says Alici.
It remains to be seen whether it will have practical applications, he says.