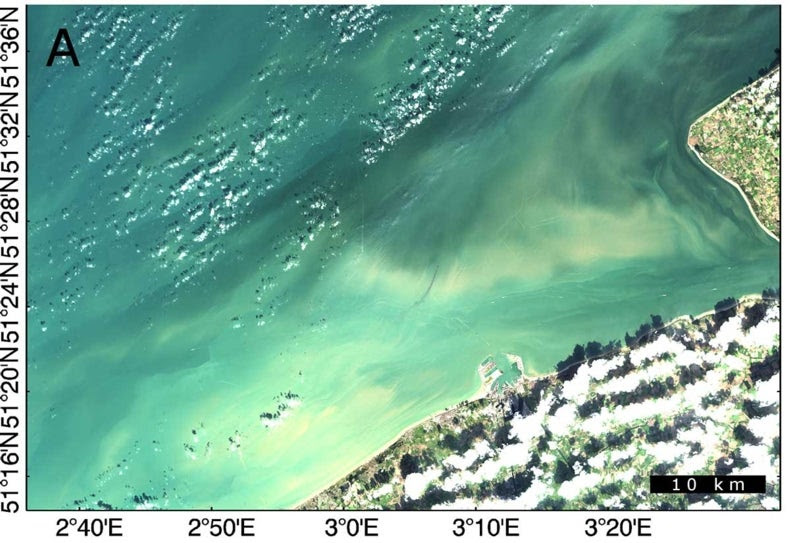 Landsat-8 image taken in 2013 of shipwreck sites off the coast of Belgium.
Credit: HIGHROC 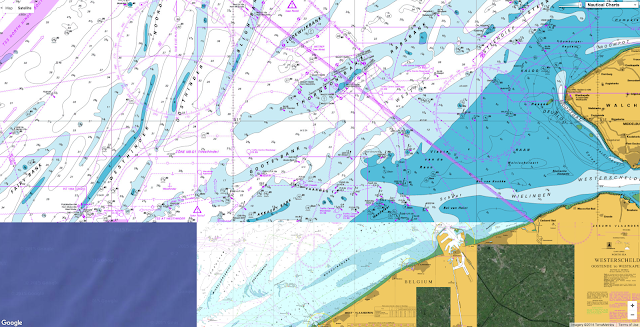 UKHO chart with the GeoGarage

More than three million shipwrecks may be scattered across the oceans, UNESCO estimates.
"Of all the wrecks in the world, maybe less than 10 percent have been found," says James Delgado, director of maritime heritage at the National Oceanic and Atmospheric Administration's Office of National Marine Sanctuaries.
"Any technology that enables us to pinpoint wrecks is a step in the right direction."

Neither method works well for cloudy, shallow waters, however.
This means that nearshore waters—often both shallow and cloudy—are frequently overlooked in hunts for old shipwrecks.
This is a problem because "the majority of shipwrecks lie closer to shore, clustered around the entrances to harbors, just as most car accidents happen a kilometer or so away from home—say, when jockeying for a spot in a parking lot or at an intersection," Delgado says.
"Near the Golden Gate Bridge there are more than 300 wrecks and off of Cape Hatteras, N.C., the 'Graveyard of the Atlantic,' there are more than 1,000." 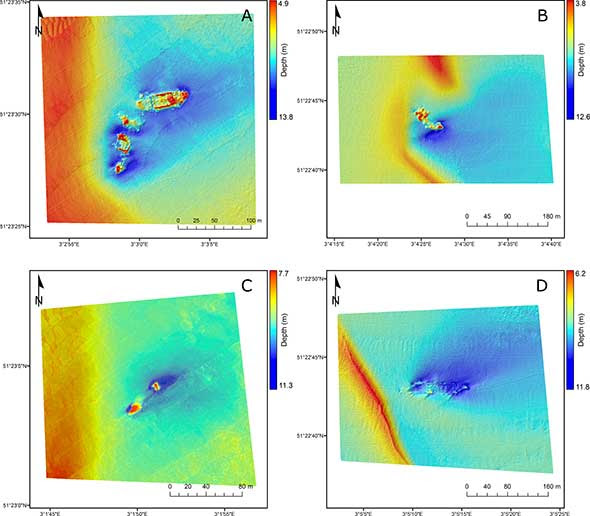 Now in a new study detailed in the February Journal of Archaeological Science, marine geologist Matthias Baeye at the Royal Belgian Institute of Natural Sciences and his colleagues suggest that satellite color photos of the oceans could help find submerged wrecks in shallow cloudy waters.
"It is a clever and elegant solution for using satellites to find shipwrecks," says Peter Campbell, archaeological director of the Albanian Center for Marine Research who was not involved in this work. 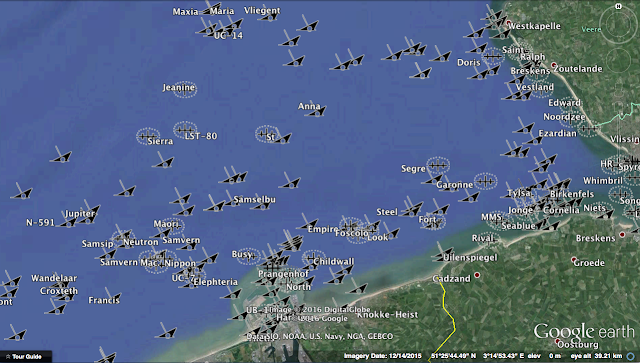 Baeye and his colleagues examined satellite color photos taken by Landsat 8, which NASA and the U.S. Geological Survey launched in 2013.
The researchers analyzed four known wreck sites near the Port of Zeebrugge on the Belgian coast, all civilian vessels.
Two of the wrecks sank after hitting mines during World War II, one sank shortly before the war after colliding with another vessel and one sank in 1965, likely after striking one of the World War II–era wrecks. 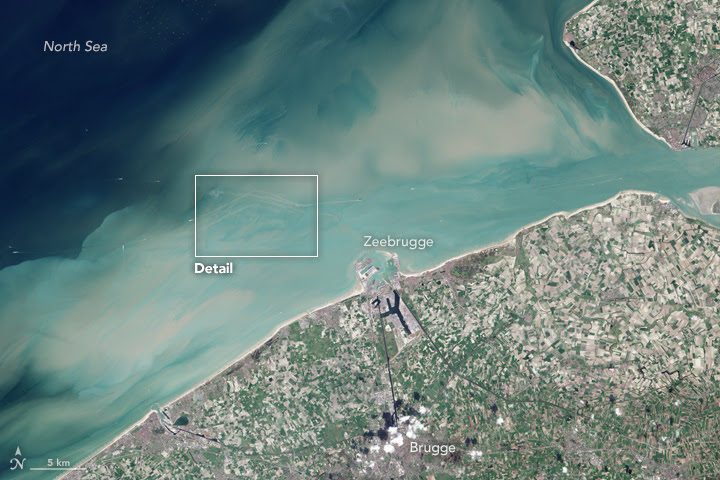 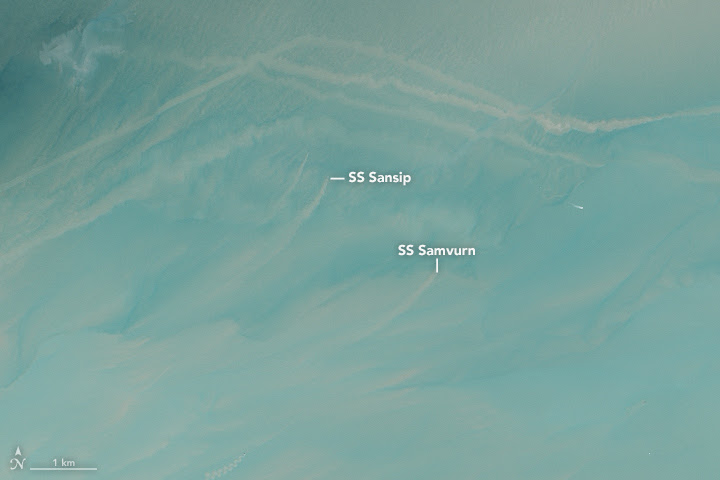 Baeye and his colleagues focused on suspended particulate mater in the seawater, such as sand and silt.
High-resolution satellite imaging can measure the concentrations of these particles—the researchers had previously investigated how natural phenomena such as tides and human activity, such as fishing and dredging, could influence these particle levels, and unexpectedly noticed that shipwrecks could have an effect, too.

The scientists found that tidal currents flowing against these wrecks can generate distinctive linear plumes of these particles up to four kilometers long that are detectable from space.
"It'd be like finding pyramids based only on how they disturb the patterns of wind around them," Delgado says.
The researchers noted that usage of Landsat 8 data is free, and suggest that their method could help spot promising sites for follow-up surveys.
"I do think that this technique will lead to new discoveries," says Delgado, who did not take part in this research.
"As this technique gets used and refined, it will help increase the population of known shipwrecks, and the opportunities to see what stories they have to tell will also increase."

Several archaeologists have already requested satellite data from the researchers, "mainly from the Mediterranean Sea but also from Belgium and the U.K.," Baeye says.
Marine archaeologist Brendan Foley at Woods Hole Oceanographic Institution, who did not participate in this study, suggests "a very interesting possibility for this technique would be seeing if this works on wooden wrecks in the shallow, turbid, muddy-floored Baltic Sea, where low salinity results in remarkably well-preserved wooden hulls. Beautifully preserved wrecks from at least the 15th century A.D., and no doubt earlier, are numerous there."

Baeye notes it remains uncertain if there is a depth limit to their method—the four wrecks they looked at were all located in less than 15 meters of water.
Deep plumes may not reach near the surfaces of oceans, and therefore satellites could not image them.
"If it works in, say, 80 meters of water, then it could be a way to locate some historic wrecks," Foley says.
"I'd like to find and survey the wreck of the USS Tang, the World War II submarine commanded by Medal of Honor recipient Richard 'Dick' O'Kane. It went down in the Taiwan Strait after sinking most of a Japanese convoy, a victim of a circular run of its last torpedo."

The shipwrecks that Baeye and his colleagues have analyzed so far with their technique are all modern metal wrecks.
Older wooden ships may be more difficult to spot because they may have decayed and collapsed, therefore kicking up less of a plume.
If further research reveals this method can also find older wooden wrecks, "I'd love to use satellites to look at Imari Bay in Japan for the fleets sent by Kublai Khan that were sunk by the fabled kamikaze typhoons," Delgado says.
Posted by geogarage at 1:18 AM