Image of the week : new land on the Louisiana Coast 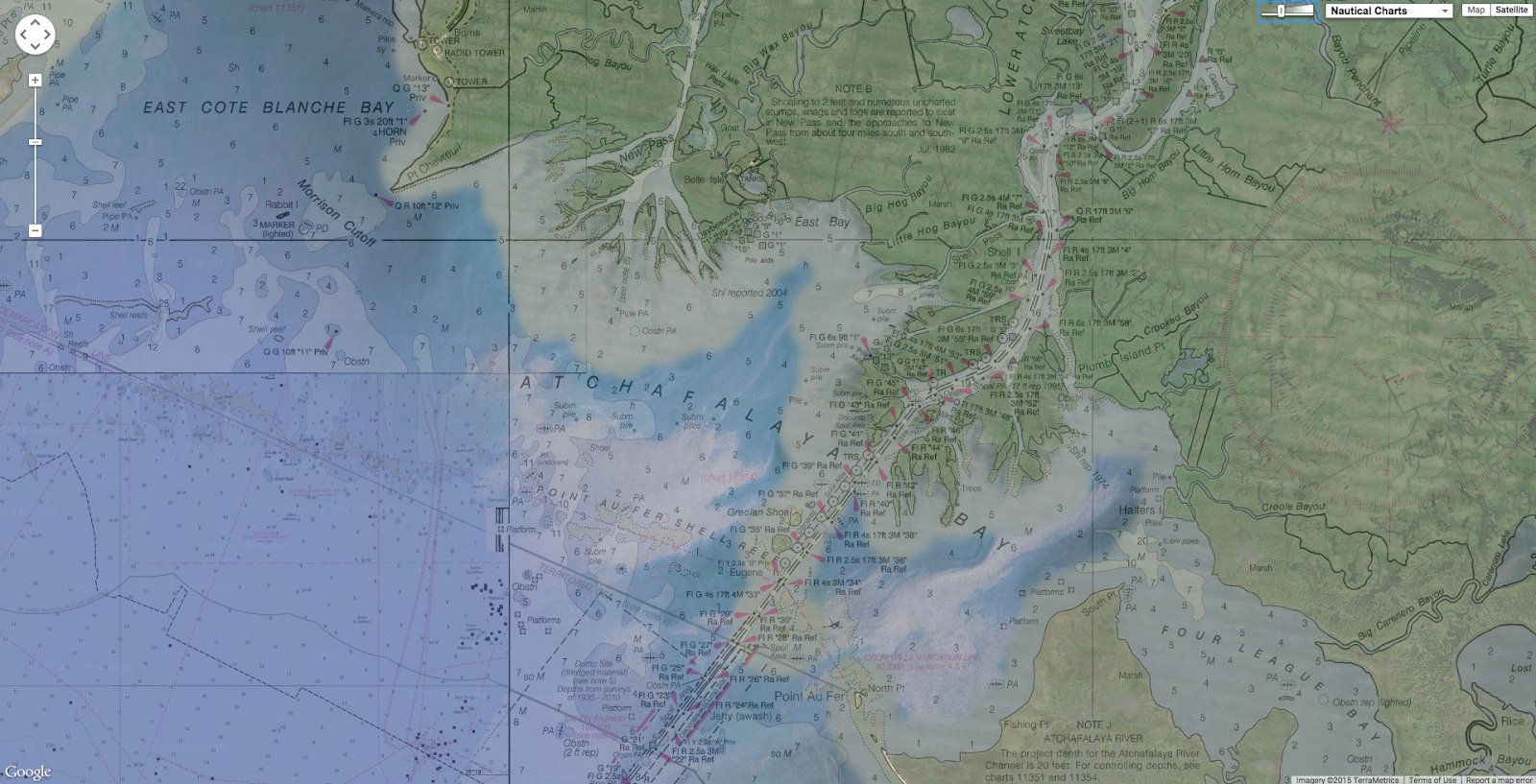 Atchafalaya Bay with the Marine GeoGarage 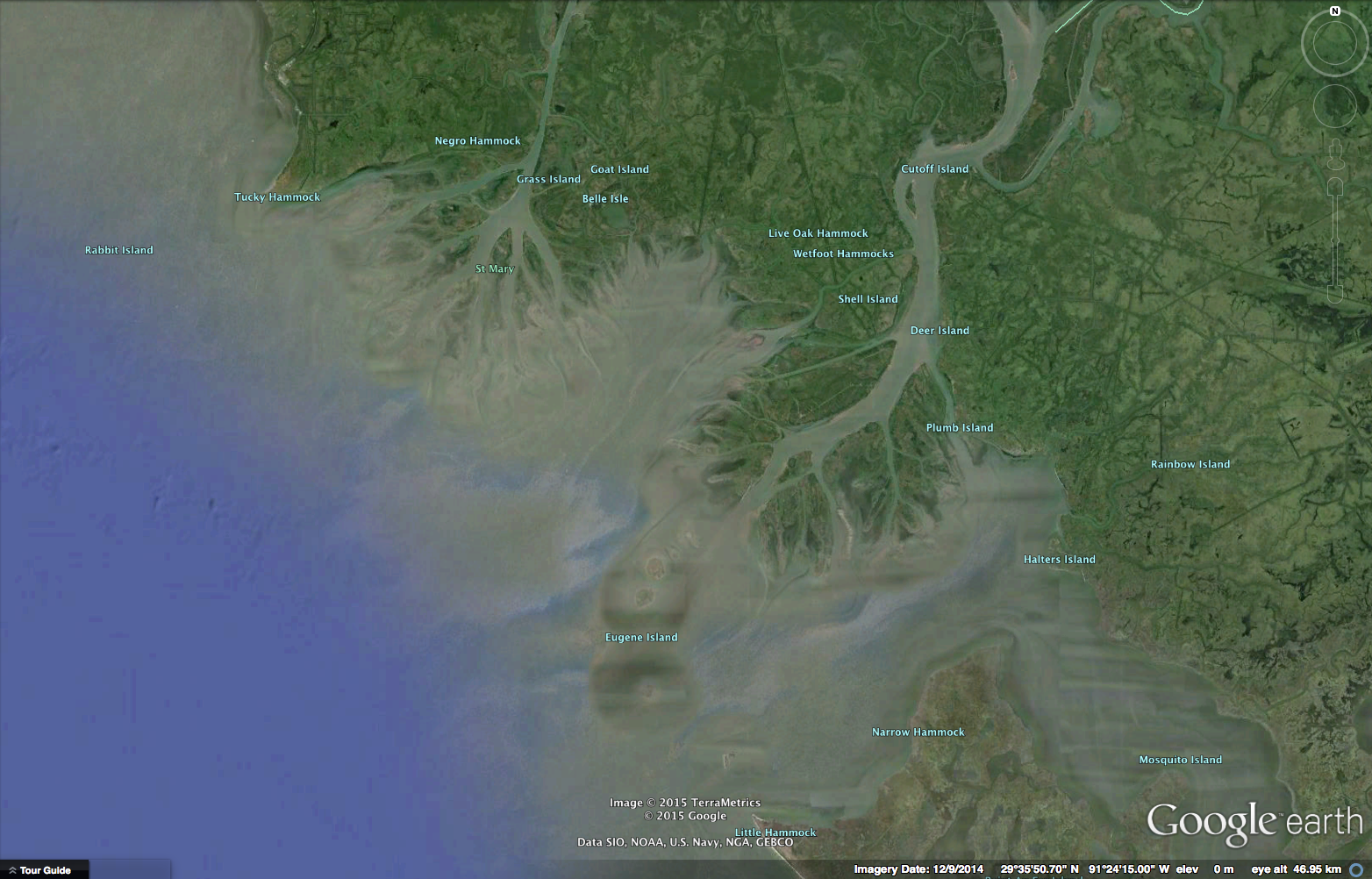 While most of the delta plain of the Mississippi River Delta is losing ground, new land is forming in Atchafalaya Bay at the mouths of the Wax Lake Outlet and the Atchafalaya River.
Geologists first noticed mud deposits building up in Atchafalaya Bay in the 1950s, but new land first rose above the water line in 1973 after a severe flood.
Since then, both deltas have grown considerably. According to one estimate by scientists from Louisiana State University (LSU), the Atchafalaya and Wax Lake Outlet deltas have combined to grow by 2.8 square kilometers (1 square mile) per year.

This pair of false-color satellite images illustrates the growth of the two deltas between 1984 (top) and 2014 (bottom).
Both images were acquired by sensors aboard Landsat satellites.
A combination of shortwave infrared, near infrared, and green light was used to accentuate differences between land and water.
Water appears dark blue; vegetation is green; bare ground is pink.
All of the images were acquired in autumn, when river discharge tends to be low.
Vegetation appears slightly brown in 1984 because the image was acquired later in the year.
Use the image comparison tool to slide between the two images.

The Atchafalaya is a distributary of the Mississippi River that connects to the “Big Muddy” in south central Louisiana near Simmesport.
Wax Lake Outlet, an artificial channel designed to reduce the severity of floods in Morgan City, delivers about 40 percent of the Atchafalaya’s water into the bay about 16 kilometers (10 miles) west of where the main river empties.

The deltas’ rate of growth has varied considerably, mainly due to the timing of major floods and hurricanes.
Floods transport large volumes of extra sediment to Atchafalaya Bay, while hurricanes redistribute sediment within the bay and transport it offshore into deeper waters.
Hurricanes also destroy coastal vegetation that would otherwise protect land from erosion.

The Atchafalaya delta has grown at a faster rate than its neighbor—about 1.6 (0.6 square miles) square kilometers per year, versus 1.2 square kilometers (0.46 square miles) per year for the Wax Lake delta.
The difference is due to regular dredging and channel widening on the lower Atchafalaya, which delivers extra sediment to its delta.
Due to the lack of dredging, Wax Lake delta is more natural in character, with a more symmetric, lobate shape.

“We are looking carefully at the Wax Lake and Atchafalaya deltas as models for building new land and preserving some of our coastal marshlands,” said Harry Roberts, director of the Coastal Studies Institute at LSU.
“If we start diverting significant portions of the water and sediment from the main channel of the Mississippi River into adjacent wetlands, lakes, and bays—as happens now in Atchafalaya Bay—we’ll be taking an important first step toward saving a significant part of Louisiana’s coastal plain.”


Learn more and see more imagery by reading “Growing Deltas in Atchafalaya Bay.”
Posted by geogarage at 1:49 AM