The government's first nautical map of South Florida (1855)
showed most of the development was south of the Miami River.
(NOAA Office of Coast Survey) 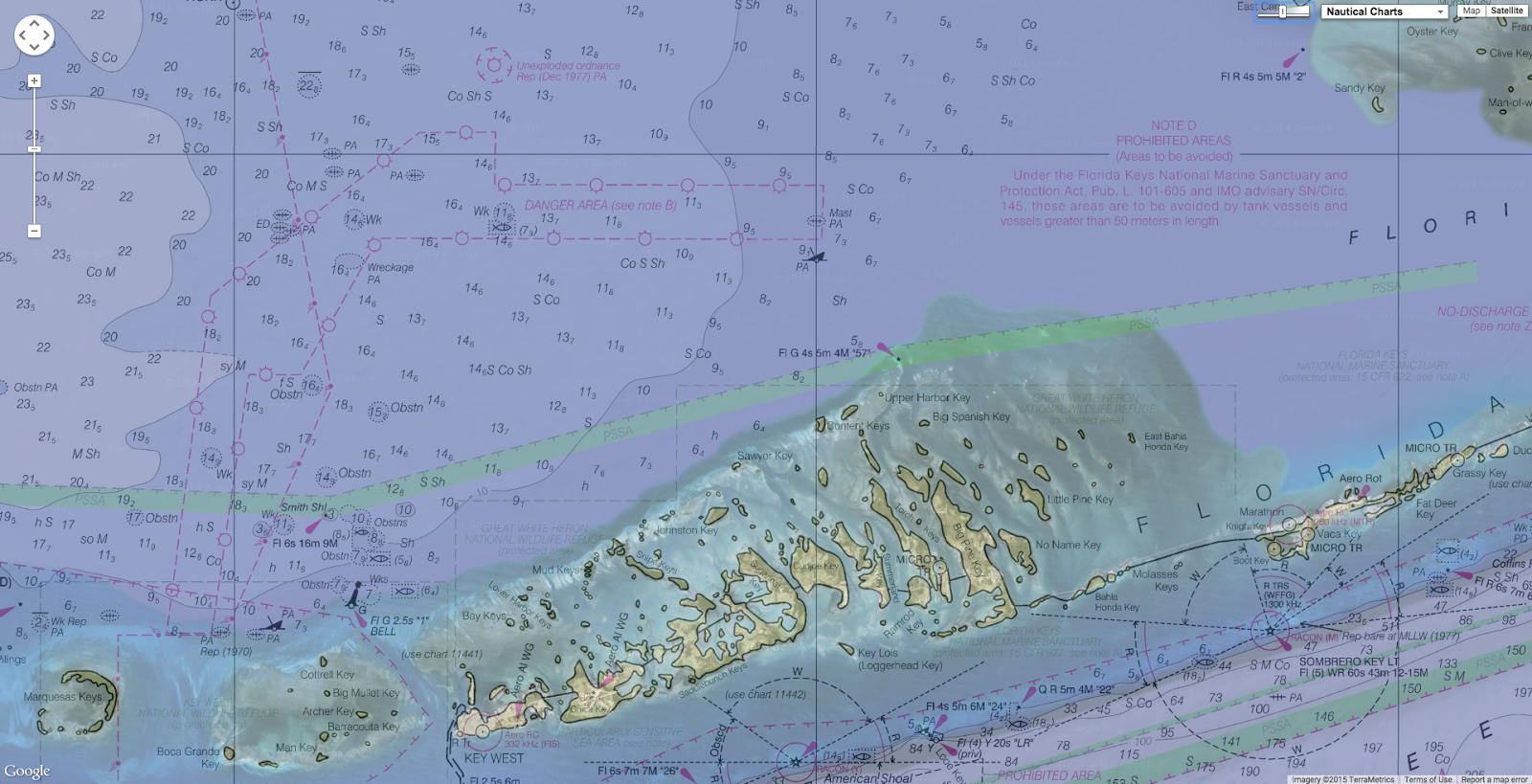 South Florida in 2015 with the Marine GeoGarage

From Sun Sentinel by Ken Kayle

In 1854, six years before the Civil War, the U.S. government first mapped the South Florida coastline, primarily to mark the depth of shoreline waters and prevent ships from breaking up on rocks.
The map didn't show much other than obscure landmarks such as Turkey Point, a place that actually had turkeys, not a nuclear plant.
Over the decades, updated maps were produced, depicting the rapid buildup of the coastline and providing another view of history.
Now, you can see it for yourself, free of charge.
The National Oceanic and Atmospheric Administration's Office of Coast Survey has put all its maps on its online site – historicalcharts.noaa.gov.

"You see the progression of coastal changes," said agency spokeswoman Dawn Forsythe.
"You can match them up and compare them with today's charts."
For instance, the 1855 map shows the bulk of South Florida's population was south of the Miami River, in what is now downtown Miami.
Aside from Virginia Key and Key Biscayne, most of the landmarks had unfamiliar names, such as Shoal Point, Black Point and Elliott's Beach.

Here's the nautical map for Fort Lauderdale in 1895. 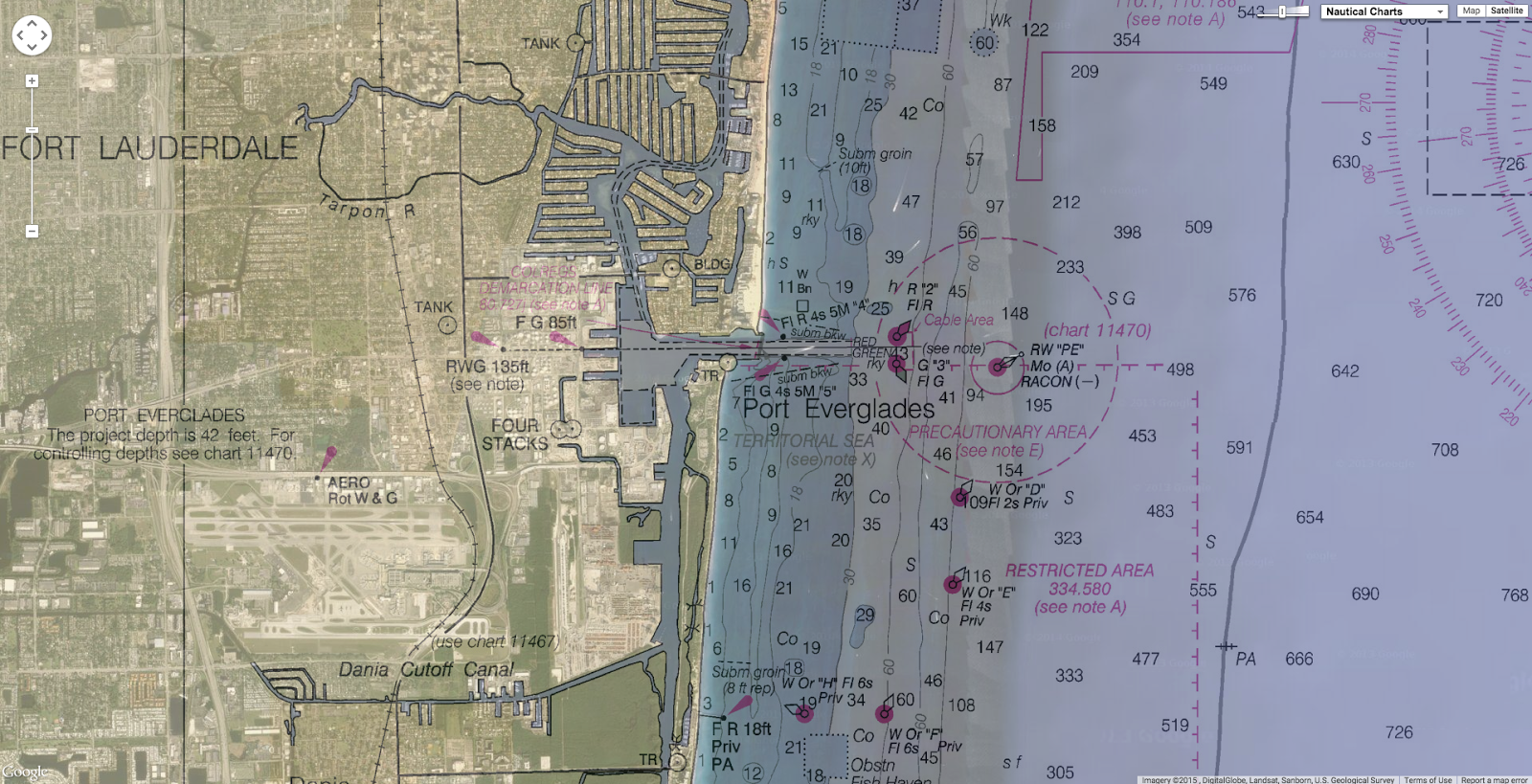 Fort Lauderdale with the Marine GeoGarage in 2015

That was the result of a land boom, said Debi Murray, chief curator of the Historical Society of Palm Beach County.
"The early 20th Century was a period of huge growth because of the Flagler railroad and because people started selling lots like crazy," she said.
Something the maps don't clearly depict: How two Category 4 hurricanes, in 1926 and 1928, devastated the region for years.

The maps prior to those storms show South Florida's cities having simple street grids and little coastal development.
Yet by the mid 1930s, maps show Miami, Fort Lauderdale and Miami flourishing with swing bridges, a network of waterways, yacht clubs, radio towers and water tanks.
In between, the region suffered miserably, Murray said.
"The 1926 hurricane put the brakes on growth and widely affect the entire region," she said.
"The 1928 hurricane destroyed thousands of homes and killed between 3,000 and 3,200 people – and we were already in a local recession then."
What rescued the region was President Franklin D. Roosevelt's Works Progress Administration in 1935, Murray said.
"It put people to work," she said.
"We were also fortunate to have wealthy tourists keep spending money here."

Because the maps are nautical in nature, they show that as late as the 1920s the inland channels sometimes were as shallow as one or two feet.
Most were dredged to nine or 10 feet by the 1960s.
More recent maps provide bottom depths in much more detail.

1855 U.S. Coast Survey nautical chart or map of Tampa Bay, Florida.
Centered on Passage Point, this map covers from St. Helena and Tampa south to Mullet Key and Palm Key.
Chart notes various triangulation points and the proposed site of a rail depot on the western shore. The city of Tampa is noted though, at this stage, development is minimal.
Countless depth soundings fill the bay.
To the left of the map, below the title, are detailed sailing instructions and notes on tides and shoals. This is one of the earliest Coast Survey charts to focus on Tampa Bay.
The hydrography for this map was completed by O. H. Berryman.
The chart was produced under the supervision of A. D. Bache, of the most prolific and influential Superintendents of the U.S. Coast Survey.
NOAA's Office of Coast Survey, based in Silver Spring, Md., was established in 1807 at the behest of President Thomas Jefferson, who wanted nautical maps drawn to improve shipping safety and to help the young nation's military better defend itself.
"Knowing more boats were destroyed by accident than war, they decided they needed to do a survey of the coast," Forsythe said.
"The first charts came out in the mid 1830s. We've been doing it ever since."

Maps were not produced every year – in the 1800s and well into the 1900s, it could take five to 10 years to produce a single map of a region.
It was a painstaking process.
Survey teams would measure water depths by dropping a lead ball attached to rope over the side of a ship until it hit bottom.
Then they would move about 500 feet and do it again, going back and forth, like a "mower over a lawn," Forsythe said.
Then engraved copper plates and a lithograph were used to produce a map.
Despite that tedious process, in the past 180 years, the Office Coast Survey has accumulated 35,000 historical maps of the entire U.S. coastline, covering about 3.4 million square miles.
"Now cartographers sit in front of computers," Forsythe said.
"About 150 charts are updated each week with critical corrections, available digitally."
While the maps are mainly used by the marine community, they also have been used by movie production companies to ensure accuracy of sets for given time eras.
And the behind-the-scenes data used to compile the maps has been used to develop storm surge prediction models, Forsythe said.
She added that the maps make great gifts for history and marine buffs.
"They are really cool to sit there and explore. It's another way of looking at history," she said.