To study the behavior of fishes and invertebrates that live in the oceans' depths, scientists need to observe and interact with these animals in their habitats.
But how?
Conventional no-decompression SCUBA diving only affords routine excursions to the first hundred feet of depth. Advanced techniques allow for diving to several hundred feet, but human physiology sets practical limits for the type of work and amount of time at that depth.
The Exosuit, the newest generation of atmospheric diving systems, keeps the pilot protected from the effects of pressure and will allow a trained pilot to perform delicate work at depths of up to 1,000 feet (305 meters) for hours.
Together with a remotely operated vehicle (ROV), the Exosuit will provide new ways for scientists to observe, photograph, and collect marine life in areas that are otherwise difficult to explore.
The first-production Exosuit—currently the only suit in existence—will be tested as a scientific tool in July 2014 on the Stephen J. Barlow Bluewater Expedition, in partnership with J. F. White Contracting Company. 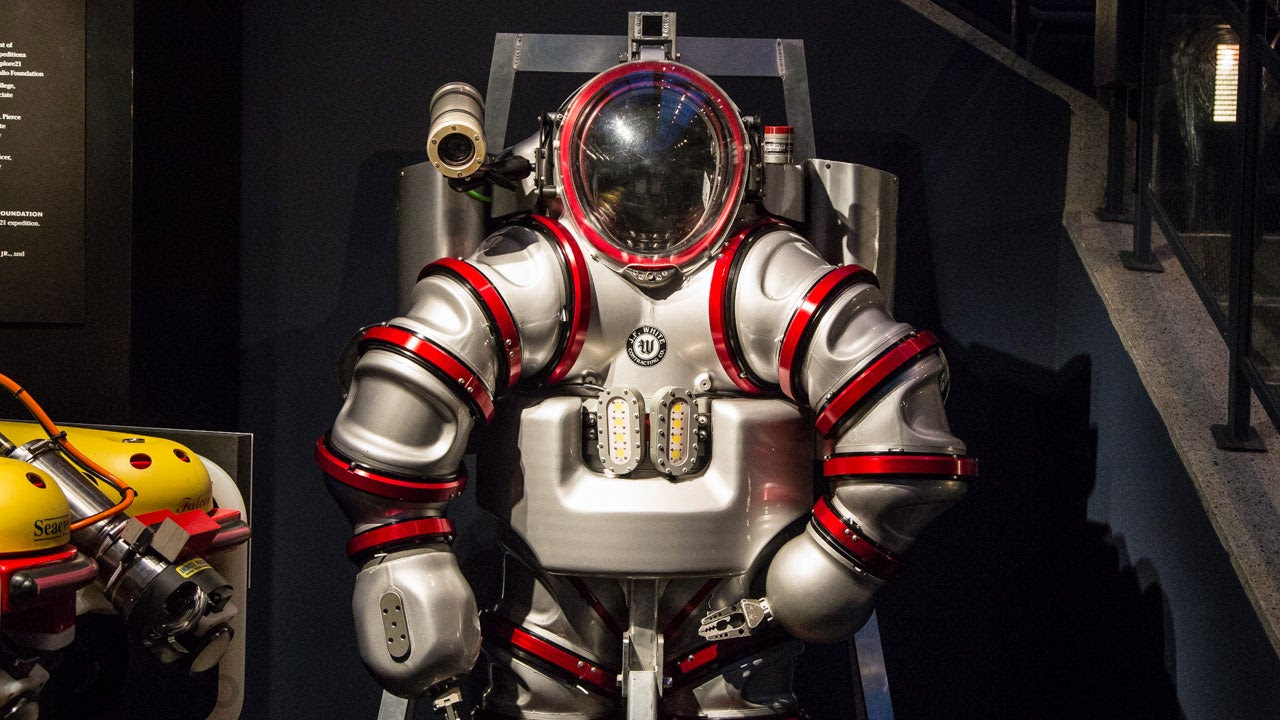 Meet the Exosuit.
It's a $600,000 atmospheric diving suit capable of taking a human 1,000 feet underwater at surface pressure, and it's the first of its kind.
If you have dramatic music handy, you should go ahead and play it, because this thing is insane. 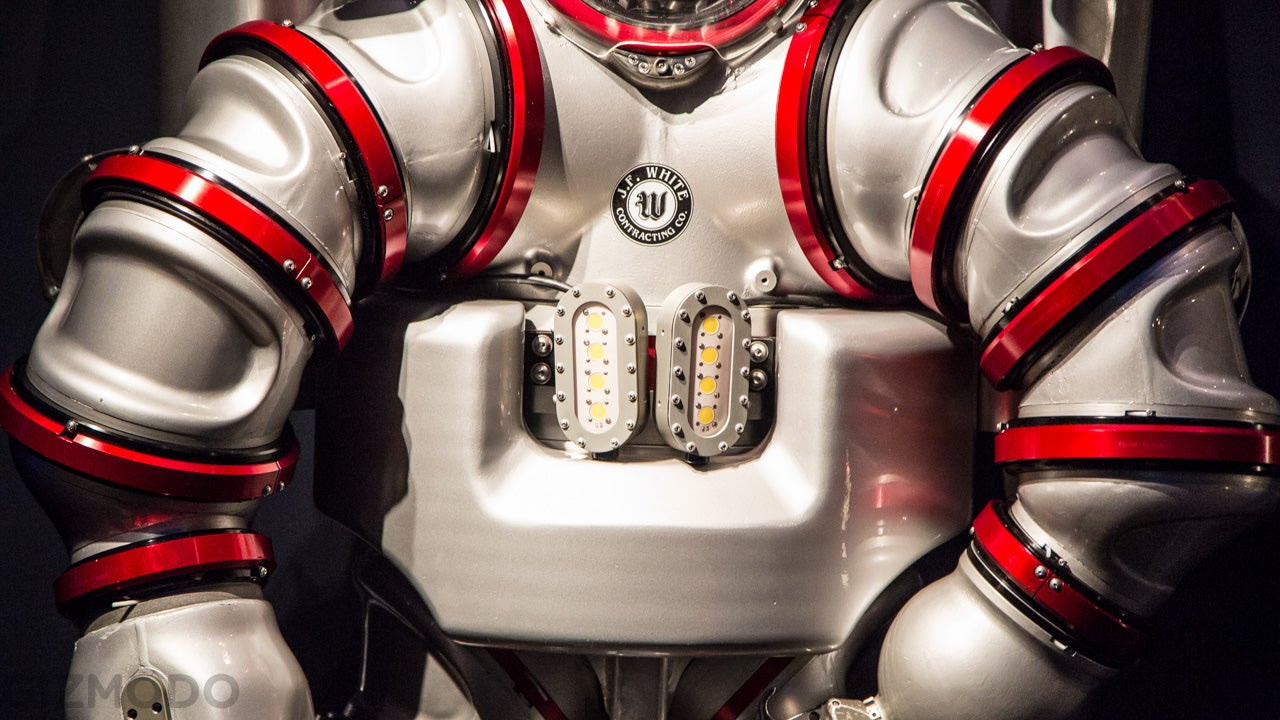 It's what Tony Stark would wear to go hang out with Namor.
Built and designed by Vancouver's Nuytco Research, Ltd., the Exosuit is 6.5-feet-tall aluminum alloy rig that weighs more than 530 pounds and allows scientists and researchers to research unknown creatures at extreme depths where the pressure is 30 times that of what it is on land.
The Exosuit is also fitted with an oxygen system with 50 hours of life support, as well as powerful LED lights for full visibility, and a teardrop-shaped viewport that lets the operator look down to chest-level.

The Exosuit, the newest generation of atmospheric diving systems (ADS), keeps the pilot protected from the effects of pressure and will allow a trained pilot to perform delicate work at depths of up to 1,000 feet (305 meters) for hours.
Together with a remotely operated vehicle (ROV), the Exosuit will provide new ways for scientists to observe, photograph, and collect marine life in areas that are otherwise difficult to explore.

When the subsea suit is submerged, the weight is completely neutralized, and the wearer can communicate with and constantly send info to the surface.
The result of more than 35 years of research, it's propelled by four 1.6-horsepower foot-controlled thrusters with foot pads on the bottom that give the pilot full control of where he or she is going.
Most importantly, the noble Exosuit has 18 oil-filled rotary joints on the arms and legs to ensure smooth movement.
In fact, the hands are so dexterous, people with just an hour of training have been able to easily pick up a dime off the ground when wearing it.
More practically, they're also capable of using scalpels and syringes, custom manipulators that act as grips for collecting and photographing, and other tedious tools you need when researching small sea creatures.
AMNH Ichthyology curator chief John Sparks explained that the possibilities are really endless:

Just going down in the submarines for those few [research and testing] trips gave me a bunch of ideas and we saw creatures that we could study and extract their proteins for use in biomedical work and the first thing I thought was it'd be neat to have this suit and have eyes on them then just seeing them on a TV screen from an ROV with that limited ability to interact with that it just didn't give you the same understanding of the physiology. You're actually in the environment. [In the Exosuit], you're there and immersed almost like one of the other organisms.

Technically, yes, you could dive 1,000 feet in a normal diving skin suit.
But you wouldn't last long down there.
The pressure is so great at that depth that you'd only be able to stand it for a few minutes.
This is the first contraption that lets you not only go deep, but stay there long enough to capture a specimen and handle it with dexterity. 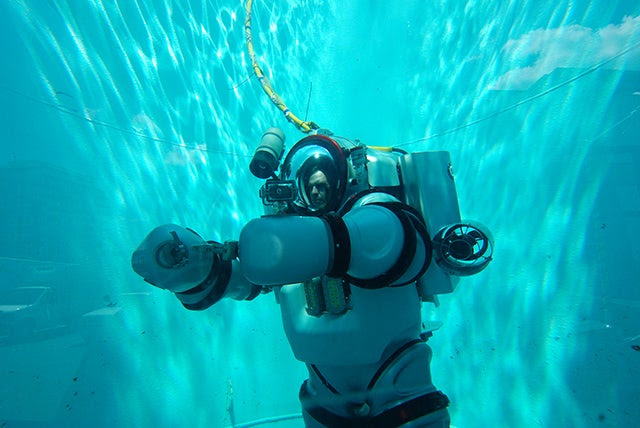 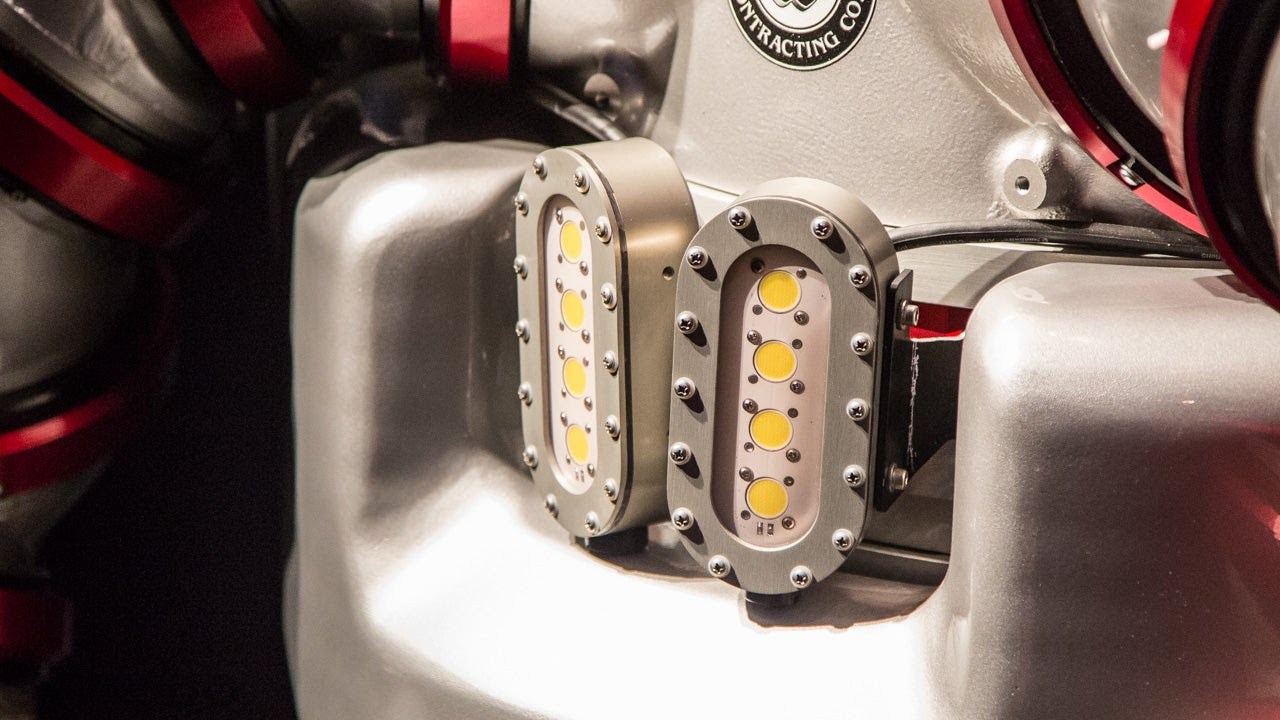 What's it going to do?

The Exosuit already had some water time this past summer in the Solomon Islands.
But this July the Exosuit will get its sea legs when it's used as a test tool on the Stephen J. Barlow Bluewater Expedition, 100 miles off the coast of Massachusetts.
There it will be used to explore an area of the ocean called "The Canyons," which is named for its series of steep drop offs from the continental shelf to almost 10,000 feet below.
But the Exosuit, specifically, will be used in the mid-ocean range to peep bioluminescent creatures, beings we don't know all that much about yet. 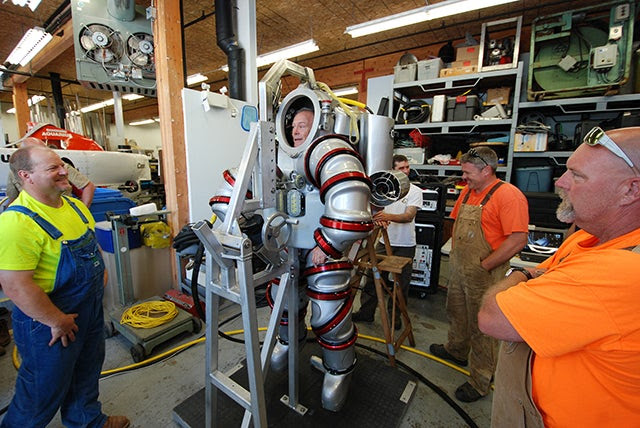 We want to know more about their biological make-up for several different reasons.
So far, scientists have actually only identified 180 species of bioluminescent fish, despite being convinced that there are orders of magnitude more.
So there is a simply a fact-finding angle.
We've also been in the dark over not just how many there are, but how they live, Sparks said:

What we want to be able to do is get down deeper and see these animals alive. So currently on this expedition we could bring them up in a trawl, which is pulling a deep net from behind the boat, but what tends to happen is the fish get crushed and mangled and very few come up alive which doesn't allow us to observe their flashing patterns, so what we're left with is just basing these inferences on anatomy, what they look like, but we really need the flashing patterns to go along with that, and that would give us the evidence to go a-ha!, they ARE communicating, if we could get an image or a video of unique flashing patterns for these different species then we know they're using this light to communicate with each other.

The Exosuit also travels with a sidekick, the DeepReef-ROV, a National Science Foundation-developed $600,000 vehicle that is designed with the express purpose of studying bioluminescence by taking high-res images of these critters in their natural habitats.
The ROV is amazing in its own right.
It's fitted with three cameras (but can have up to 10), and it's always sending up information to the surface via fiber. 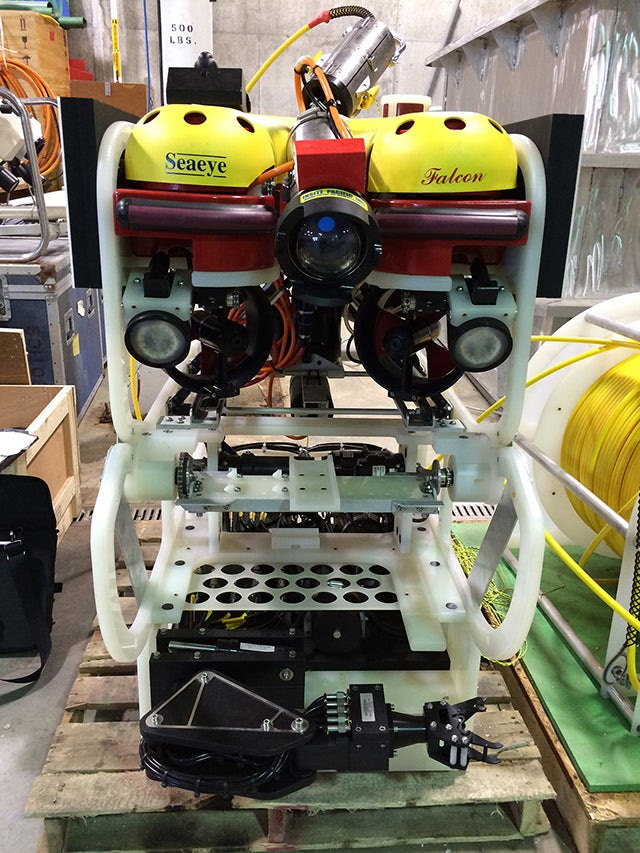 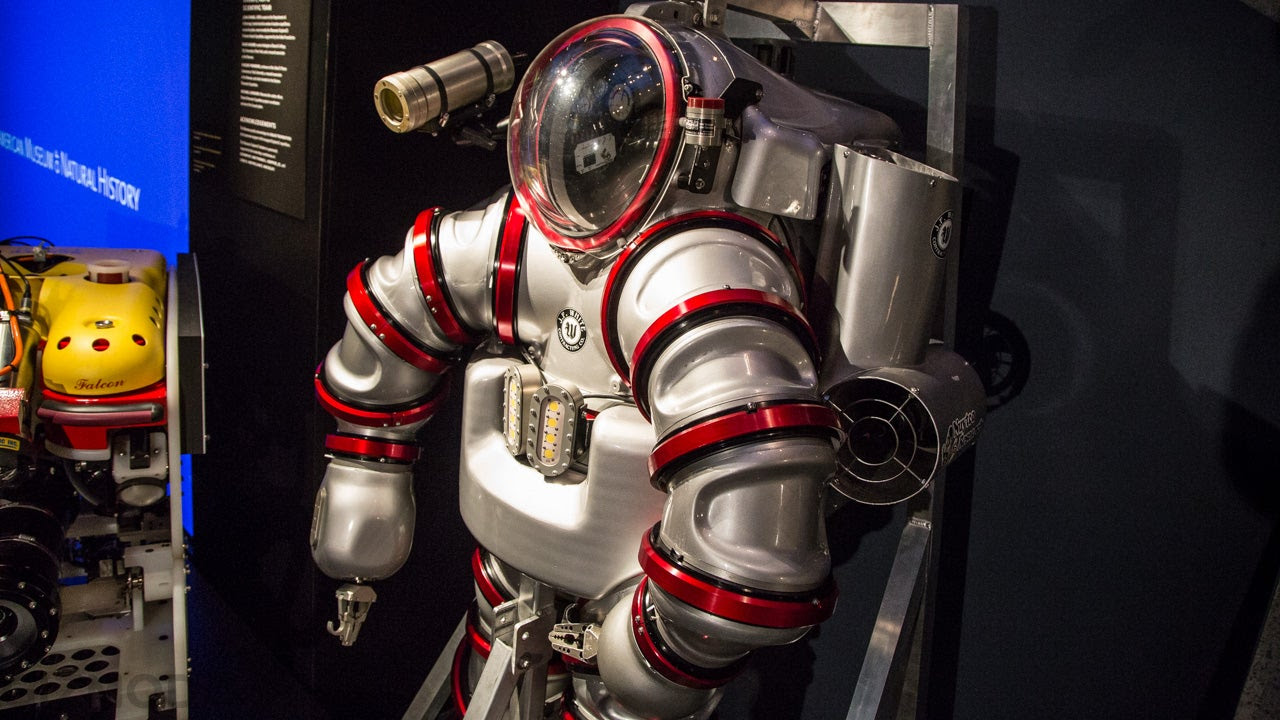 Studying bioluminescent beings isn't just an end unto itself. It has implications for humans, too.
There is a protein that exists inside bioluminescent creatures that has a similar counterpart in the human brain.
Discovered in the 60s, it's called the "green protein," and if we learn more about it, scientists couple potentially unlock a lot of information previously unknown about how our brains signal, how they deteriorate, and so forth.
This could be applied to epilepsy research, Alzheimers research, cancer detection, and on and on and on.
Bioluminescent proteins can also show us a lot about the otherwise unseen processes that happen within cells, because when they happen in these glowing animals, they're expressed in flashes of light.
So scientists can learn more about cell function as well as disfunction that would be hidden in other organisms.

And that's just this one study.
Having access to the Exosuit means that eventually we'll have access to lots and lots of Exosuits, which means we'll be able to explore the ocean not just in more depth, but with more granularity than we ever have before.
You can take your 20,000 leagues; we'll take 1,000 feet any day. 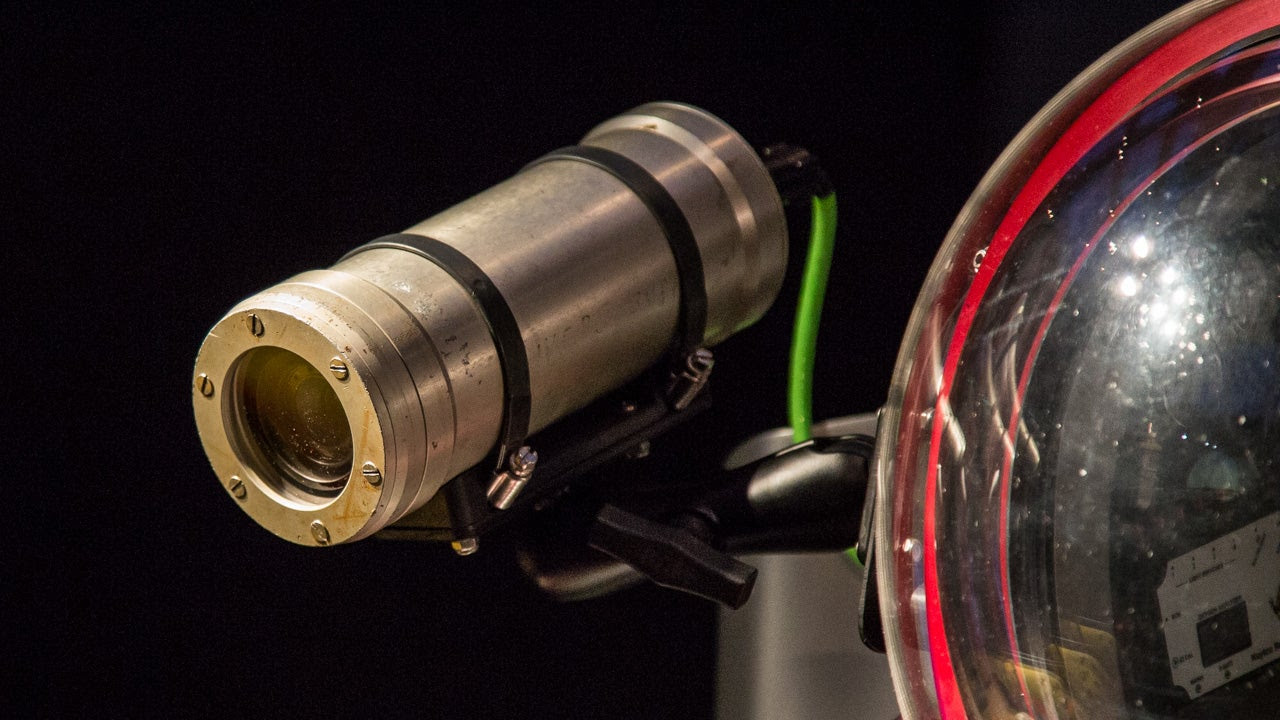 One of the Exosuit's cameras 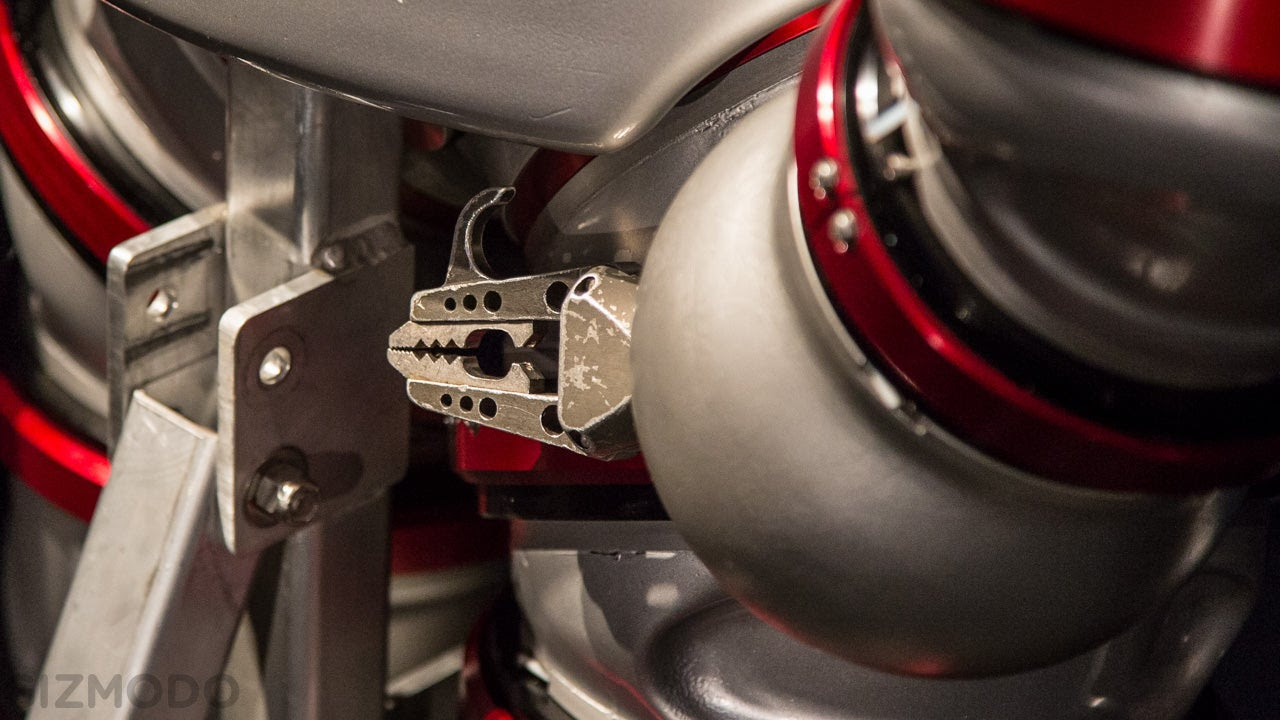 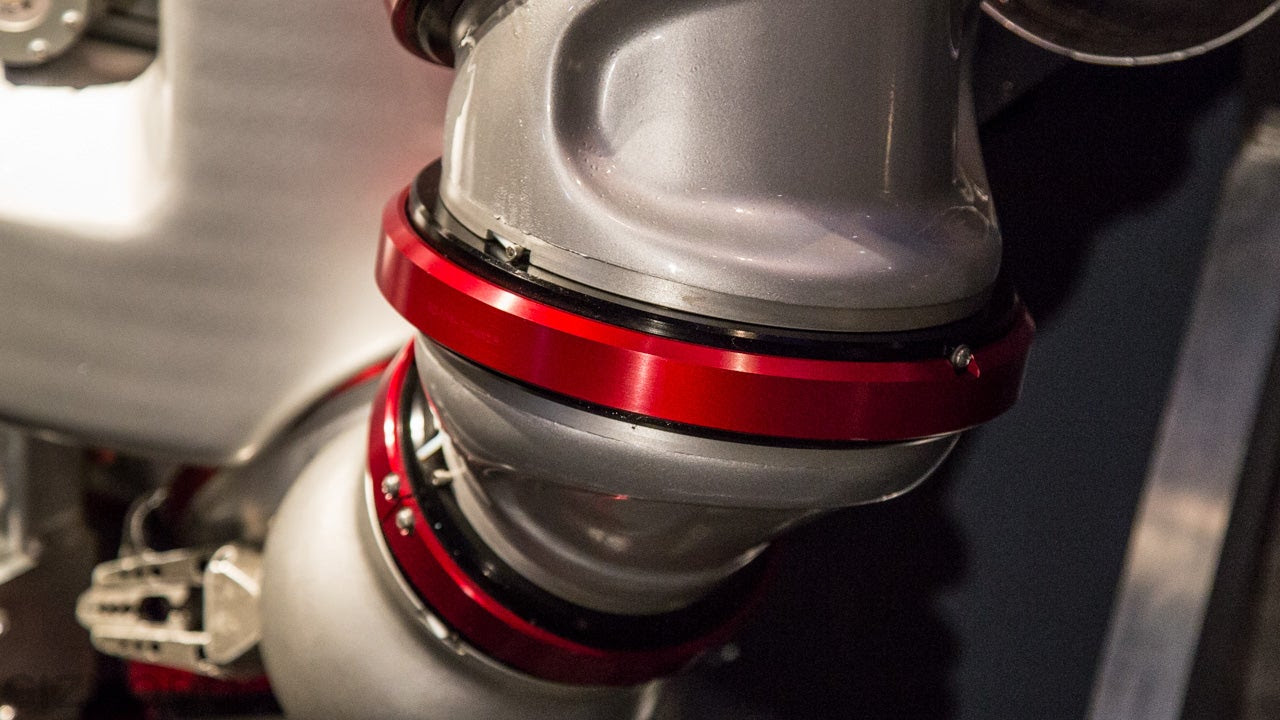 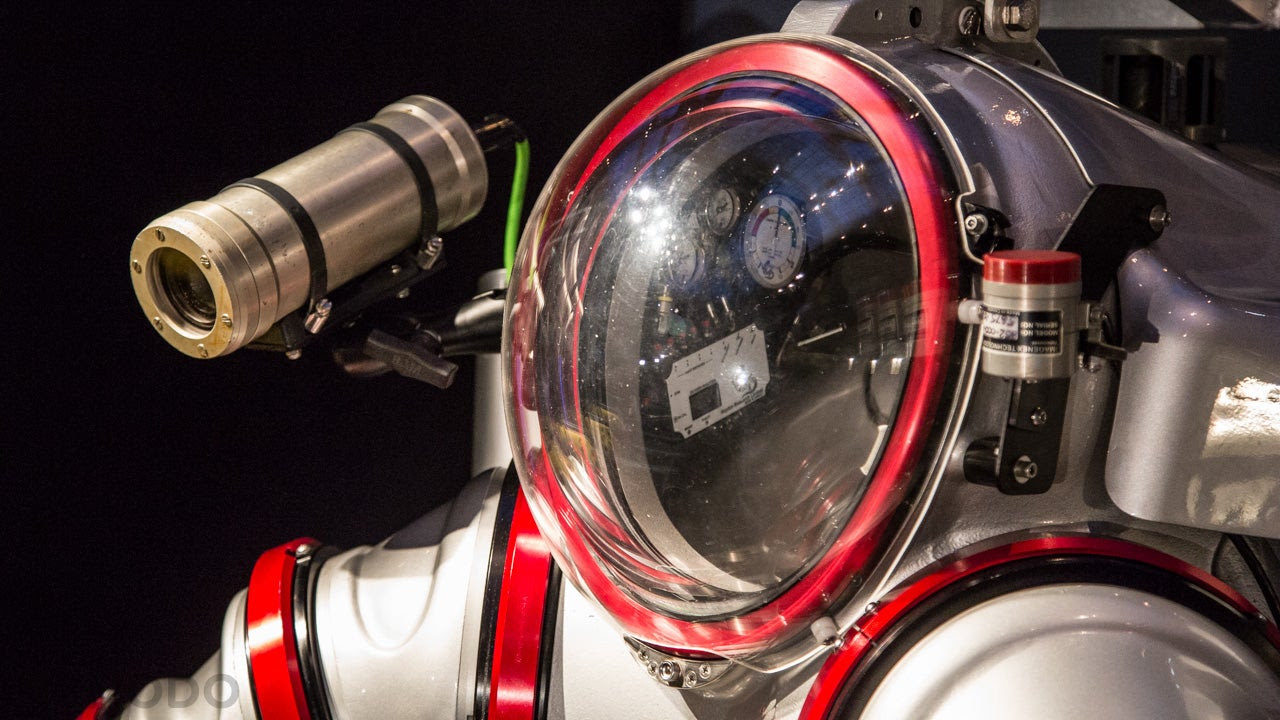 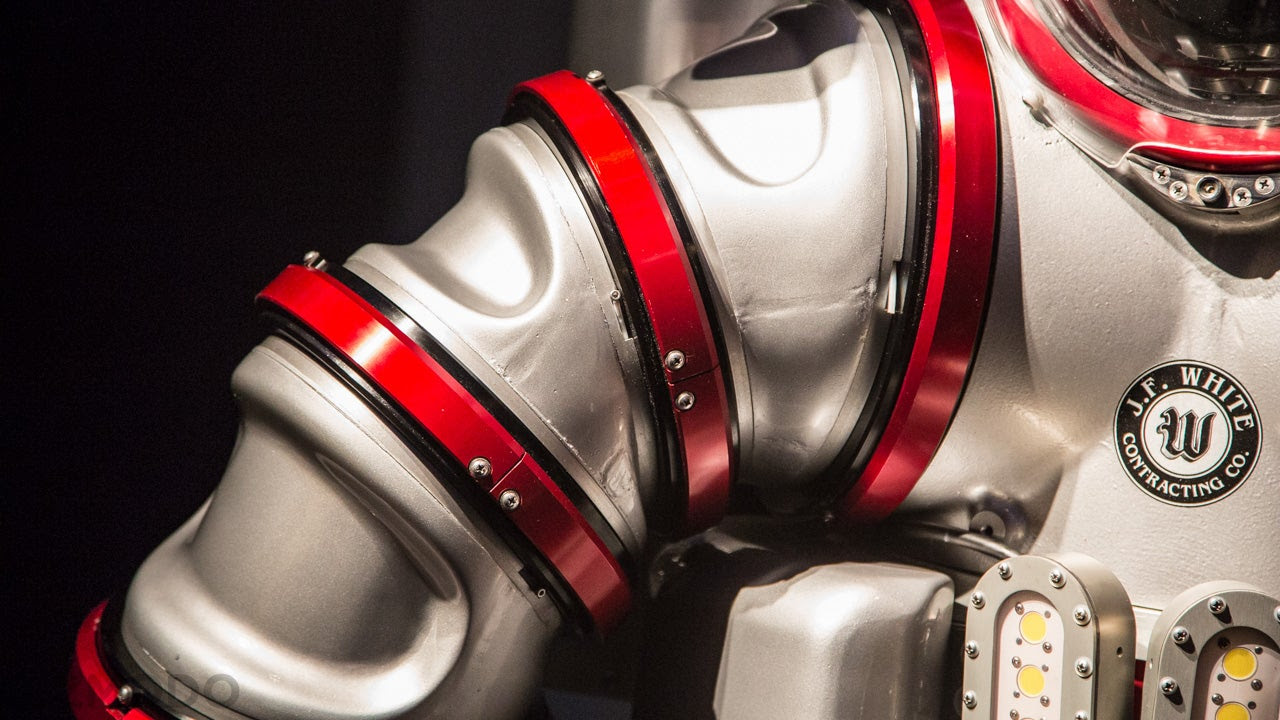