Animation of the Agulhas Rings, ocean eddies of the black hole type.

Astronomers may peer deep into the cosmos to study mysterious black holes, but would you believe there are "black holes" right here on Earth?
Well, almost.
A new study by scientists at the Swiss university ETH Zurich and the University of Miami shows that, mathematically speaking, large ocean eddies behave much like black holes.
The watery vortices break off from currents and have their own "coherent" boundaries, as black holes do.
Also like black holes, they swallow anything that gets too close and allow nothing to escape.
"The photon spheres around black holes have the property that anything (except light) is sucked into the black hole through them," study co-author Dr. George Haller, professor of non-linear dynamics at ETH Zurich, told The Huffington Post in an email. "
Similarly, the eddy boundaries we find have the property that anything that floats on the ocean surface (except water) is sucked into the eddy through them."
The eddies can last a year or two, Haller said, though most peter out after a few months. 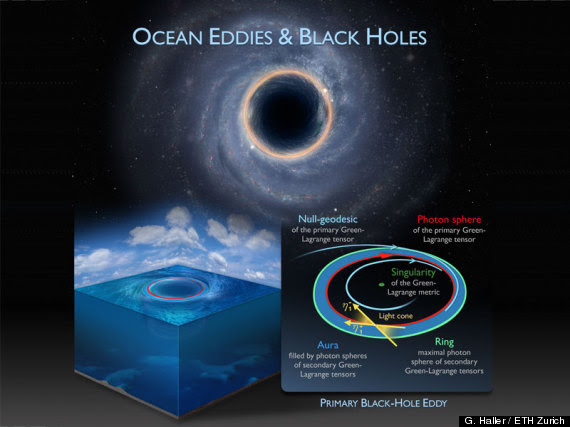 Haller and Dr. Francisco Beron-Vera, a professor of oceanography at the University of Miami, developed a model for identifying the eddies' boundaries using the same mathematics used to reveal black holes' photon sphere boundaries.
Using satellite observations made over the course of three months, they used the model to locate seven "black hole" eddies with diameters of 200-300 kilometers.
A fascinating finding, for sure.
But there's a real-world benefit to finding black hole-like eddies within the oceans.

The mild winters experienced in Northern Europe are thanks to the Gulf Stream, which makes up part of those ocean currents spanning the globe that impact on the climate.
However, our climate is also influenced by huge eddies of over 150 kilometres in diameter that rotate and drift across the ocean.
Their number is reportedly on the rise in the Southern Ocean, increasing the northward transport of warm and salty water.
Intriguingly, this could moderate the negative impact of melting sea ice in a warming climate.

"Fully capturing the effects of coherent oceanic eddies is a major impetus behind efforts at several climate modeling centers around the world," Dr. Robert Hallberg, an oceanographer with the National Oceanic and Atmospheric Administration's geophysical fluid dynamics laboratory, told The Huffington Post in an email.
The eddies can transport warm, salty water and nutrients far north, acting to moderate the effects of climate change by promoting large-scale mixing in the ocean.
They help counteract the effects of melting sea ice that introduces cold water with low salinity into the oceans, disrupting global circulation.
Identifying eddies may also help scientists predict the movement of polluted water, such as that resulting from an oil spill.
The study was published in the September issue of the Journal of Fluid Mechanics.
Posted by Peio at 1:33 AM