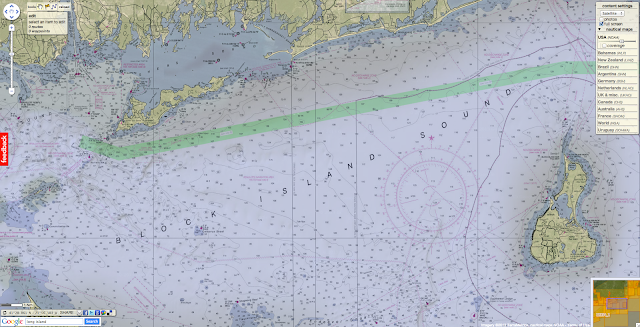 The new editions of charts 13217 (Block Island) and 12372 (Long Island Sound, small craft) cover areas that are critical to navigation and which, for the most part, had not been surveyed since the 1960s.
They identify two dozen new dangers to navigation, and incorporate new shoreline for Faulkner Island, Goose Island, and the port of New London.
Maritime officials in the area welcomed the new editions.

“The updated hydrography depicted in the highly traveled area south of Fisher’s Island and Watch Hill as well as updated shoreline delineation of the adjacent land masses will significantly improve the margin of navigational safety for boaters and commercial shipping,” explained retired Coast Guard Capt. Chuck Beck, who is now transportation maritime manager for Connecticut’s Department of Transportation.

"Ocean floors are amazingly dynamic, and we have to chart those changes to provide precise and accurate navigational data for today's maritime economy," explained Cmdr. Lawrence Krepp, who was commanding officer and the chief scientist of the Thomas Jefferson.
"Our data is used to update NOAA's nautical charts, but the hydrographic information can also support a number of other uses, ranging from fisheries management to alternative energy siting and ocean use planning."