First view inside of a ship in Google Street View

A $60 million research ship funded by a Google executive (Eric Schmidt) R/V Falkor which set sail from San Francisco last month to study a "dead zone" in the Pacific Ocean and other mysteries of the sea. 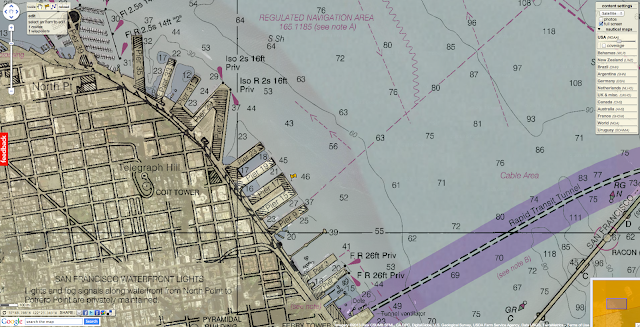 The 272-foot vessel, Falkor, carries an unmanned submarine that will travel deep into the ocean off Vancouver Island to study an area where sea life dies each year from a periodic lack of oxygen, called hypoxia.
Researchers speculate that the cause may be a changing climate or caustic runoff like sewage from land.

The Falkor is funded by the Schmidt Ocean Science Institute, which was co-founded by Google executive Eric Schmidt and his wife, Wendy. (see Forbes)
After stopping to study the dead zone, the ship named for a flying creature in the movie "The NeverEnding Story" will move on to study a submarine volcano, the Axial Seamount, about 300 miles west of Oregon.
A microbiologist will study the tiny organisms living for millions of years inside fissures in the volcanic rock, and another scientist will study viruses that have adapted to the unique habitat.

And scientists working aboard the Falkor are treated to amenities not found on the usual research ship: a sauna and down-filled bunks among them, the San Francisco Chronicle reported.
"It may not be needed up here," Victor Zykov, the institute's director of research, told the newspaper about the sauna.
"But when we're up in cold Canadian waters, the scientists and crew will surely appreciate it after a long day on deck."

Waiting this program, the Google Oceans team has launched the projet to collect indoor StreetView inside the ship in a prove of concept way to show the Business Photos possibilities for photographers, agencies and business owners.

Falkor located right off the pier at the SF Exploratorium

Now with over 300 panos on 9 different levels, this is the most complicated Google indoor Street View collect to date. 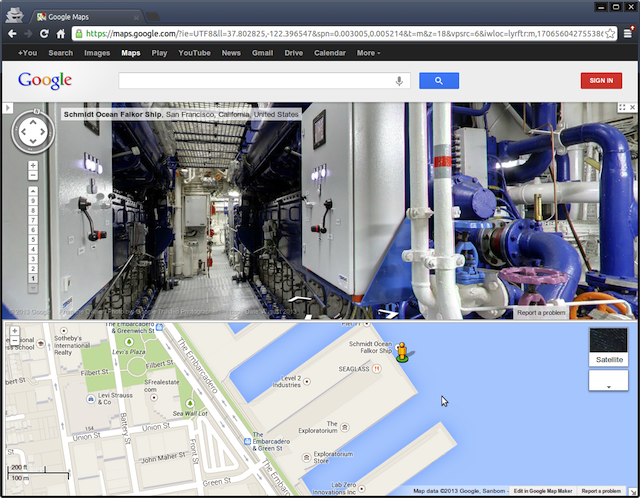 
Jump to any of these to begin exploring :
click on the different pictures to play with the panoramic 360° pictures.

Engine Room : the cleanest engine room most have ever witnessed. All in Google colors too!

Bridge : bonus points if you know the function of the circles on the front windshields.
Remember you can zoom into areas / control boards on street view to get a better view.

Sauna & Lounges : after over 6 years as an employee, it really does look like what one would expect Google on a boat to be.

Helideck : the ominous dramatic clouds later cleared from the tower, but we think it looks awesome this way. Look for the Oracle America’s Cup catamaran in the bay.

Crows nest : to capture the views from the very top, we turned off the radar due to higher levels of radiation in the hopes of me one day having children and taking advantage of Google's great parental benefits and daycare services.
The view includes the Bay Bridge, financial district skyline, Exploratorium's solar grid, Coit Tower, and a smattering of navigation and data collection devices (GPS, Inmarsat C...)


By the way, the Google Ocean team announces GME terrain launch with cooler views in 3D in parnership with the SOI's multibeam sonar bathymetry data during their recent KT Boundary expedition last March 2013 to map the asteroid that ended the Cretaceous period (65 million years ago) hitting Earth in the Yucatan Peninsula, Mexico, forming what is today called the Chicxulub impact crater. 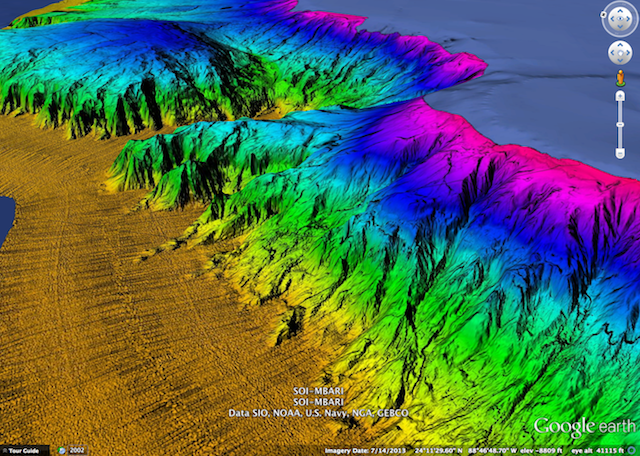