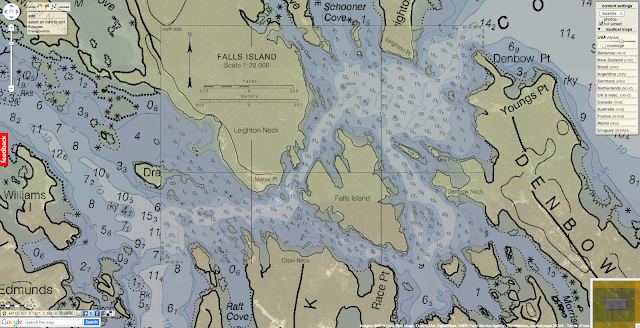 Northern Maine fishing vessels will be able to navigate more safely around the dangerous Cobscook Bay beginning this month with the publication by NOAA of a new edition of the area’s nautical chart.
The chart includes a new detailed illustration ‒ called a "chart inset" ‒ of the waters around Falls Island, providing safer passage for mariners who transit those waters.

While NOAA cartographers had updated Chart 13394 (“Grand Manan Channel”) over the past several years, using depth measurements and obstruction locations acquired during a major hydrographic survey in 2010, a new inset was needed specifically for Falls Island.

The inset hydrographic data was acquired by a NOAA Coast Survey navigation response team who conducted a full bottom survey in the Bay from June to October 2010, at the request of the area fishing community and U.S. Senators Olympia Snowe and Susan Collins.

The new inset, called “Falls Island,” is created on a 1:20,000 scale and shows a significant amount of detail. Chart 13394, Grand Manan Channel (Northern Part), was first published in 1992.
Prior nautical charts of Cobscook Bay go back to the 19th century, when the U.S. Coast and Geodetic Survey, NOAA’s predecessor organization, first began its survey of Maine in 1863 and published the nautical chart Eastport to Moose Cove in 1893.
Posted by Peio at 4:23 PM