Image of the week : mangroves, domes, and flats on the UAE coast 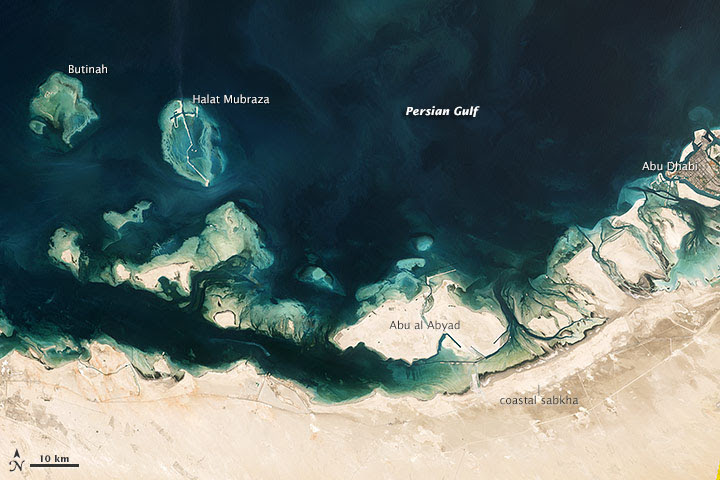 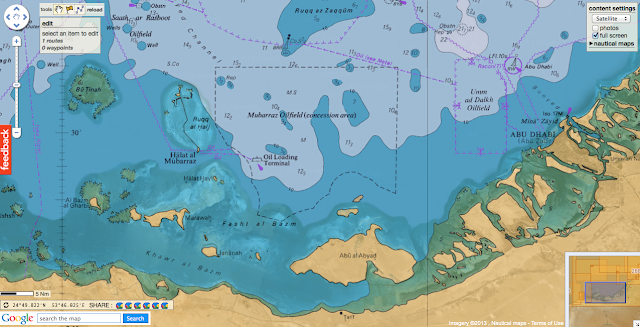 
A mention of the United Arab Emirates (UAE) coast might bring to mind the artificial islands near the city of Dubai. But to the southwest, the UAE coast is dotted with a complex mixture of natural features: mangroves, salt domes, salt flats, and coral reefs.
The Enhanced Thematic Mapper (ETM) on the Landsat 7 satellite captured some of this mixture on September 18, 2001, when it imaged Abu Dhabi (Abu Zabi) and the coastal region to the west.

The area around Abu Dhabi is rich in mangroves—trees and shrubs able to grow in salty soil and water—that help prevent coastal erosion.
Although mangrove forests typically occur in tropical and subtropical environments, the summertime temperatures along the UAE coast (often exceeding 35°C, or 95°F) pose challenges to mangrove survival.
Mangrove forests here have grown in recent decades, according to the UAE government, thanks to large-scale re-forestation programs.

Southwest of Abu Dhabi is a coastal sabkha, or salt flat, which extends more than 1.5 kilometers (0.9 miles) inland in some places.
Most of the sabkha sits above the normal high tide level, but heavy rains or a combination of spring tides and storm surges can occasionally soak the surface.
Water encourages the growth of mats of cyanobacteria, which lend the surface a wrinkled texture.
When the water evaporates, brilliant white salt crusts remain.

Pale beige sands blanket many of the coastal islands north and west of the sabkha, and some of the islands are ringed by coral reefs, which glow iridescent blue beneath the shallow ocean water.
In the case of Halat Mubraza and Butinah, the corals dwarf the islands they surround.
The reefs in this region are home to a multitude of species.

Farther west are islands formed by salt domes.
Compared to other types of rock, salt has a low density, and when buried by a relatively soft layer of rock, salt can rise up through the overlying layer like a balloon filled with helium.
Off the UAE coast, some salt domes have poked above not only the rock layers, but also the ocean surface.
Just off the edge of this scene (visible in the high-resolution download) is Sir Bani Yas, a salt dome island that now holds a nature preserve and orchards.
Posted by Peio at 1:05 AM