How a fake island landed on Google Earth

A view on Google Earth of the phantom Sandy Island

Last year, a group of Australian researchers "undiscovered" an island the size of Manhattan in the South Pacific.
A mysterious place called Sandy Island had popped up on maps, northwest of New Caledonia.
It even showed up as a black polygon on Google Earth.
But when scientists sailed there last November, they found open water instead of solid ground.

In an obituary for the island published this month, the researchers explained why the phantom landmass had been included on some maps for more than a century, pointing to some human errors and a possible pumice raft. 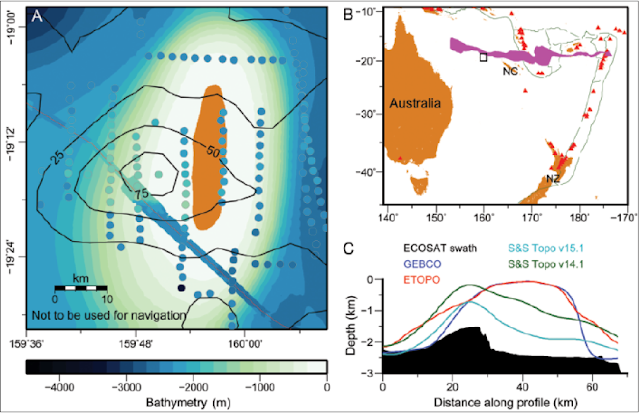 Sandy Island was first recorded by the whaling ship Velocity in 1876 and first mentioned on a British Admiralty chart in 1908.
But future expeditions failed to find the island, and it was removed from some official hydrographic charts by the 1970s.

However, the errant island stuck on some maps and then crept into digital databases like the widely used World Vector Shoreline Database, which was developed by the U.S. military.
"During the conversion from hard-copy charts to digital formats the 'Sandy Island' error was entrenched," said Maria Seton, of the University of Sydney.
(Seton was chief scientist on an expedition to study plate tectonics on the RV Southern Surveyor when the "undiscovery" was made.)

But what did the crew of the Velocity see in the first place that led to the false discovery of Sandy Island in 19th century?
Seton and her colleagues speculate that it might have been a giant pumice raft.
Pumice forms when volcanic lava cools quickly, trapping gas inside and creating lightweight rocks that can float.

Last summer, an erupting undersea volcano called the Havre Seamount sent pumice drifting off the coast of New Zealand across an astounding area of 8,500 square miles (22,000 square kilometers). And Sandy Island happens to sit along a pumice "superhighway."
"It is believed that wind and ocean surface currents in the area combine to funnel pumice rafts through the area between Fiji and New Caledonia on their way to Australia," Seton and her colleagues wrote in an article in the journal EOS.
"The formation of this 'pumice raft superhighway,' which passes by the location of Sandy Island, lends weight to the idea that the Velocity may have captured a moment when some sea‐rafted pumice was traversing the area."