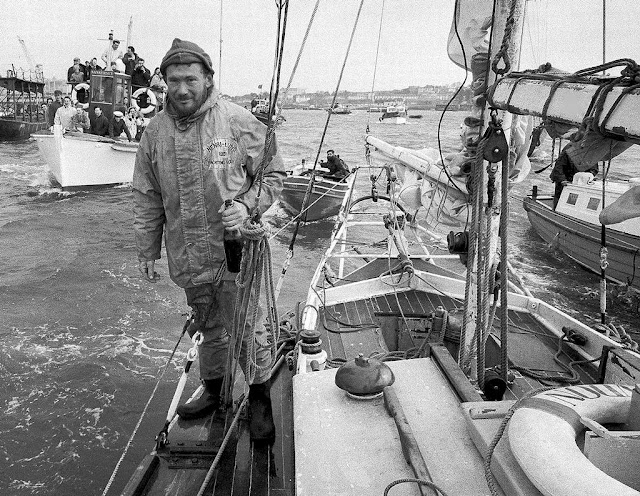 A 3,000-strong archive of pictures, taken during Sir Robin Knox-Johnston’s pioneering solo non-stop round the world voyage in 1968/9, has been discovered and saved for posterity by specialist photo library PPL.
The story is published for the first time in the May issue of Classic Boat magazine.

The pictures cover Knox-Johnston’s entry in the Sunday Times Golden Globe Race in1968/9 when Robin was one of nine starters attempting to become the first to sail alone non stop around the world. The event was billed as one of the last great challenges left to man.
For the other eight, it was a challenge too far, for Robin was the only finisher, completing the 27,000 mile circumnavigation aboard his self-built 32ft ketch Suhaili in 312 days. 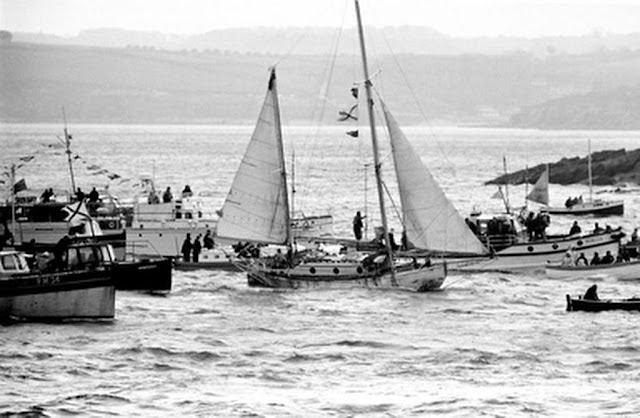 The valuable archive had been gathering dust in the library of the Sunday Mirror newspaper which had published Robin's stories during the voyage.
The negatives were about to be dumped in a skip when the London newspaper moved from Fleet Street to Canary Wharf, but by pure chance, Bill Rowntree, the Mirror photographer who had covered Knox-Johnston’s departure and return to Falmouth, happened to be in the newspaper the day of the big clear out. 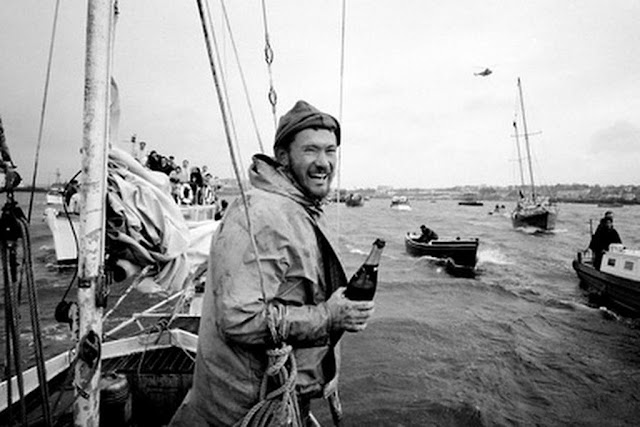 Bill, now 73, recalls, “The picture library manager poked his head round the door and asked if I had any use for them.”
Rowntree put the box under his arm and took it back to his home at Tunbridge Wells, Kent, and there the negatives may have lain, had it not been for a particular picture request from Henri-Lloyd, the clothing manufacturer that had supplied Knox-Johnston’s original oilskins, to mark their 60th anniversary celebrations this year. 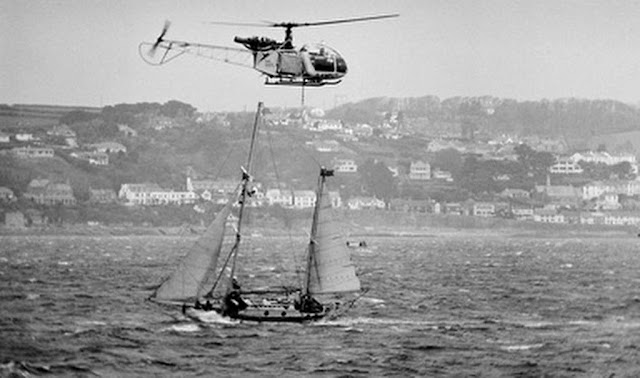 Many of the colour pictures in Knox-Johnston’s bestselling book A World of My Own, were lost after publication, but PPL Photo Agency holds what was left of the Knox-Johnston archive within its Pictures of Yesteryear Library.
This also contains the archives of other famous sailing pioneers including Sir Francis Chichester, Sir Chay Blyth, and photographer Eileen Ramsay, who captured many of these great events between 1949 and 1970.
It was Barry Pickthall’s call to Rowntree to see if he still had the negative that Henri-Lloyd needed, that prompted the question "What should we do with the other 3,000 pictures I have here?” 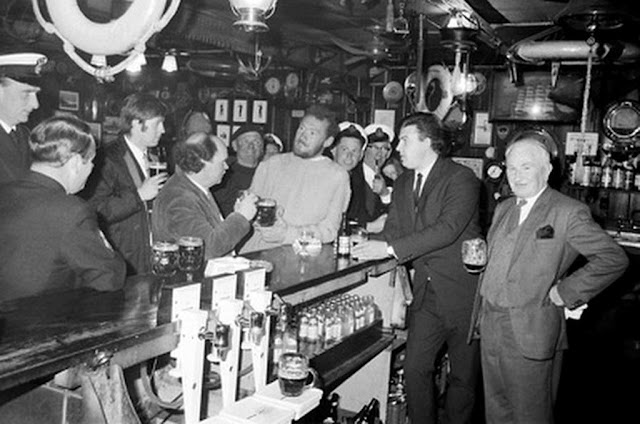 Robin Knox-Johnston regailing friends with stories of his solo circumnavigation, in the bar of the Royal Cornwall Yacht Club

Sir Robin Knox-Johnston, who is now inspiring hundreds of amateur sailors to follow in his adventurous wake aboard a 12-strong fleet of yachts in the Clipper Round the World Race starting from the UK in August, says of the find, "I thought these pictures were lost, so it was a wonderful surprise to discover that this unique record of my return to Falmouth in 1969 still exists." 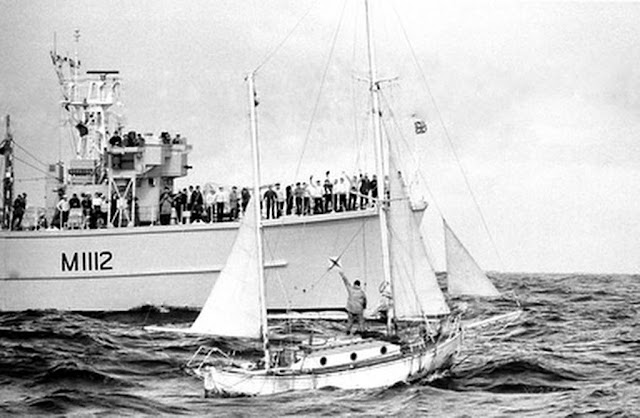 "There is something quite awe-inspiring when you look at these photographs. They capture a moment in sailing history when Sir Robin, then a young man, almost unwittingly stepped into the history books. His boat Suhaili was not the fastest – he never expected to win, but as the other competitors were beaten by the elements and gear failure, it was Robin and his seaworthy little ketch that won the day. Sir Robin went on to become Britain's most endearing and enduring sailing hero – and gave his £5,000 prize money from the race to the family of Donald Crowhurst who committed suicide during the race. 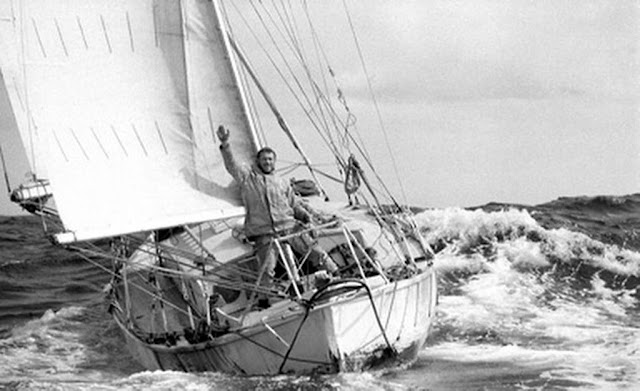 These photographs show the man as much as the hero: his parents tense faces as he reassures them saying goodbye; life aboard in his untidy cabin; his first unsteady steps as he gets ashore; his first beer ashore. It is all such a contrast with how things are done today – and it makes his feat of seamanship all the more remarkable." 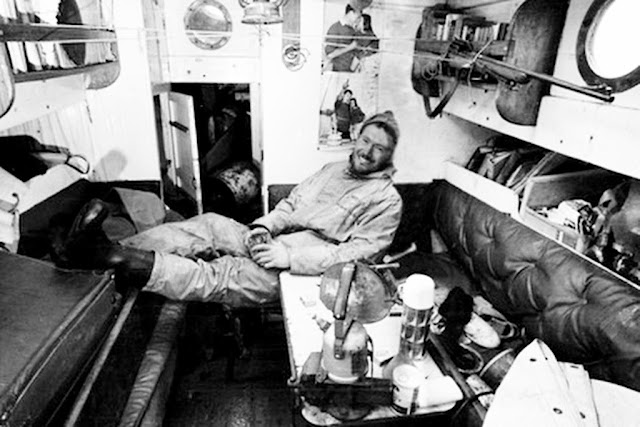