The map that misplaced the Isles of Scilly

From The Sunday Times by Richard Brooks, Arts Editor

A first-edition marine atlas from the late 17th century containing a map blamed for one of Britain’s worst maritime disasters is to go on sale.

The atlas was published by a naval captain and surveyor called Greenville Collins in 1693. 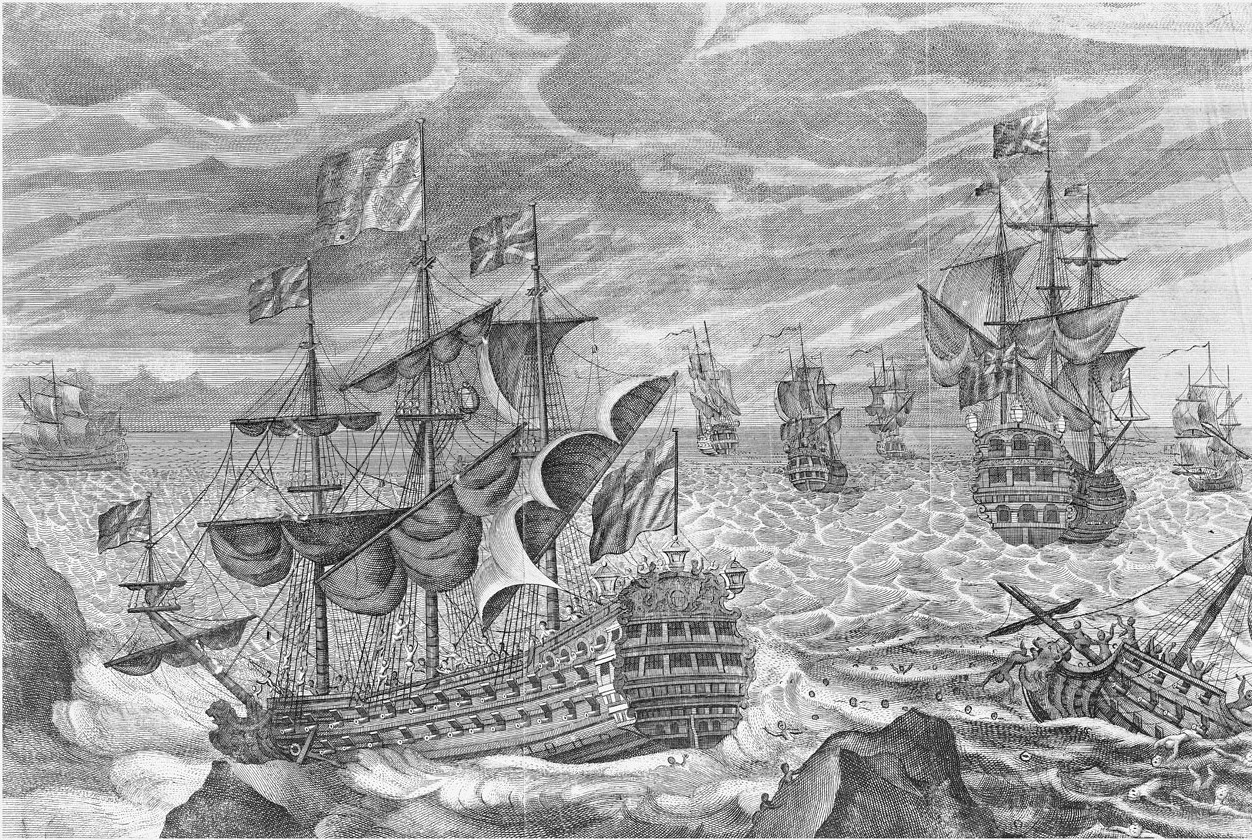 An 18th-century engraving of the disaster, with HMS Association in the centre

Tragically, cartographers had wrongly positioned the Isles of Scilly, off the Cornish coast, by eight nautical miles, an error that contributed to the wrecking of four warships in October 1707, with the loss of more than 1,400 lives. A 18th century Chart (1750) of the Isles of Scilly and Land's End
from The British Coasting Pilot dedicated to Captain Greenville Collins. 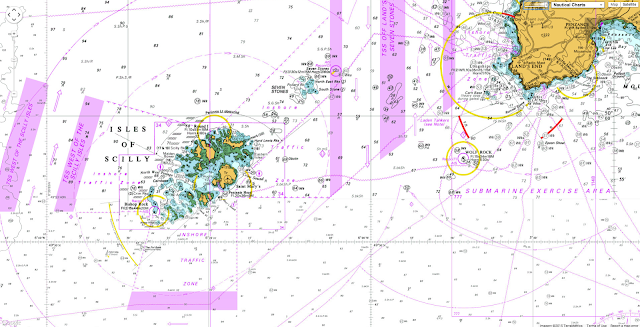 The problem was compounded by the difficulty of finding positions at sea.
The disastrous wrecking of a Royal Navy fleet in home waters brought great consternation to the nation.
The main cause of the catastrophe has often been portrayed as the navigators' inability to accurately calculate their longitude.
Clearly, something better than dead reckoning was needed to find the way in dangerous waters. As transoceanic travel grew in significance, so did the importance of reliable navigation.
This eventually led to the Longitude Act in 1714, which established the Board of Longitude and offered large financial rewards for anyone who could find a method of determining longitude accurately at sea.
After many years, the consequence of the Act was that accurate marine chronometers were produced and the lunar distance method was developed, both of which became used throughout the world for navigation at sea.
However, it is not certain that the navigational error leading to the wrecking of Admiral Shovell's fleet was purely one of longitude, and no contemporary discussions are known that appear to have related the disaster to either navigation or longitude.
The Royal Navy conducted a court-martial of the officers of the Firebrand, who were acquitted, but no officers survived from the four lost ships, so no other courts-martial took place.
The Navy also conducted a survey of compasses from the surviving ships and of those at Chatham and Portsmouth dockyards, following comments from Sir William Jumper, captain of the Lenox, that errors in the compasses had caused the navigational error.
This showed what a poor state many were in; at Portmsouth, for example, only four of the 112 wooden cased compasses from nine of the returning vessels were found to be serviceable.
Some have argued that the disaster was in fact caused more by an error in latitude than in longitude.
According to contemporary reports, Shovell initially attempted to determine the fleet's position by astronomical observations and depth soundings before also consulting the sailing masters of his other ships.
Shovell's navigation officers believed that the fleet was at a position west of Ushant (48°27′29″N 5°05′44″W), except the sailing master of HMS Lenox who judged that they were nearer to the Isles of Scilly (49°56′10″N 6°19′22″W).
William May points out that the position of the Isles of Scilly themselves was not known accurately in either longitude or latitude.
In addition, his analysis of the 40 extant logbooks from the 21 ships in the fleet do not show the error in longitude to be a significant factor compared to latitude.

Such was the public outcry that the Longitude Act was passed in 1714, offering a huge reward to anyone who could find a simple and practical method for the precise determination of a ship’s longitude.
The problem was eventually solved by John Harrison, a self-educated carpenter and clockmaker, whose marine chronometer was able to calculate the longitude — or east-west position — of a ship at sea.

The story of Harrison, whose invention extended the possibility of safe long- distance sea travel, was told in Longitude, a bestselling book by Dava Sobel.

The atlas, which is being sold by map dealer Philip Burden at the London Map Fair this week, was originally owned by Edward Rigby, a naval captain forced to move to France after being jailed for propositioning a 19-year-old man for sex.
Burden bought it from the family of the late Lord Wardington, a bibliophile whose predecessors made money from banking.
Despite its historical value, the price tag is only £18,000 because the maps are in black and white.