Unprecedented trade wind strength is shifting global warming to the oceans, but for how much longer?

Research looking at the effects of Pacific Ocean cycles has been gradually piecing together the puzzle explaining why the rise of global surface temperatures has slowed over the past 10 to 15 years.
A new study just published in Nature Climate Change, led by Matthew England at the University of New South Wales, adds yet another piece to the puzzle by examining the influence of Pacific trade winds.

While the rate of surface temperature warming has slowed in recent years, several studies have shown that the warming of the planet as a whole has not.
This suggests that the slowed surface warming is not due as much to external factors like decreased solar activity or more pollutants in the atmosphere blocking sunlight, but more due to internal factors shifting the heat into the oceans.
In particular, the rate at which the deep oceans have warmed over the past 10 to 15 years is unprecedented in the past half century.

Research led by Masahiro Watanabe of the Japanese Atmosphere and Ocean Research Institute suggests this is mainly due to more efficient transfer of heat to the deep oceans.
Consistent with model simulations led by Gerald Meehl, Watanabe finds that we sometimes expect "hiatus decades" to occur, when surface air temperatures don't warm because more heat is transferred to the deep ocean layers.
A paper published last year by Yu Kosaka and Shang-Ping Xie from the Scripps Institution of Oceanography found that accounting for the changes in Pacific Ocean surface temperatures allowed their model to reproduce the slowed global surface warming over the past 10 to 15 years.
However, the mechanism causing these Pacific Ocean changes has remained elusive.

The new study published by Matthew England's team helps explain how and why more heat is being funneled into the deeper ocean layers.
The study indicates that a dramatic acceleration in equatorial trade winds, associated with a negative phase of a cycle called the Interdecadal Pacific Oscillation (IPO) has invigorated the circulation of the Pacific Ocean.
This has caused more heat from the surface to be mixed down into deeper ocean layers, while bringing cooler waters to the surface.
The combination of these two processes cools global surface temperatures.
Like the rate at which heat is accumulating in the deep oceans, the recent strengthening of the trade winds is unprecedented, as the bottom frame in the figure below shows. 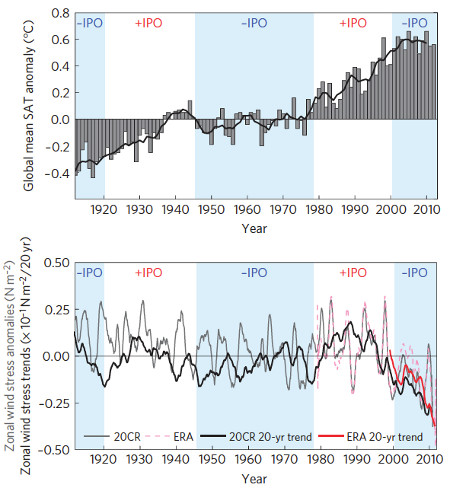 Not only is this acceleration of trade winds unprecedented, but it also far exceeds anything captured by climate models.
Hence they have difficulty reproducing the recent slowdown in surface warming.
The catch is that oscillations eventually change phases, so as England notes, the strengthened trade winds and faster rate of ocean heat accumulation are only temporary.


"the heat uptake is by no means permanent: when the trade wind strength returns to normal - as it inevitably will - our research suggests heat will quickly accumulate in the atmosphere. So global temperatures look set to rise rapidly out of the hiatus, returning to the levels projected within as little as a decade."

The study estimates that by shifting more heat into the oceans, the strengthening trade winds can account for 0.1–0.2°C cooling of surface temperatures over the past 10 to 15 years. This would account for most of the slowed rate of warming, especially when combined with a recent study showing that the global surface warming slowdown is not as large as previously thought. The lead author of that paper, Kevin Cowtan said of this study,

In the figure below, the England study compares observed surface temperature changes (black and grey) with IPCC model projections (red), and projections made by models that incorporate these changes in trade winds (green and blue). The models including trade winds can reproduce the surface warming slowdown. However, once the IPO cycle shifts and winds return to previous levels, the models see an accelerated warming at the surface, and temperatures start to catch back up to the IPCC model projections. 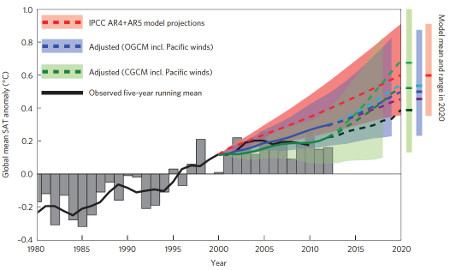 
A consistent picture is emerging in the climate research; increases in the strength of trade winds force more heat to be mixed down into the ocean, leading to a temporary slowing of rising surface temperatures.
The next piece of the puzzle will involve explaining the cause of the dramatic, unprecedented trade wind acceleration.
The IPO cycle can explain about half of the wind changes, but climate scientists are still investigating other possible contributing factors.
In any case, England concludes that surface temperatures may rapidly warm when the IPO phase shifts again in the next decade or so, and it will eventually be as though the surface warming slowdown never occurred.


"We should be very clear: the current hiatus offers no comfort - we are just seeing another pause in [surface] warming before the next inevitable rise in global temperatures."