Water pressure greases the skids for Jakobshavn, clocked at 2 meters per hour.

If the term “ice stream” sounds like an oxymoron to you, you haven't seen the Jakobshavn. (Pronounced “yah-cobes-hah-ven”.)
This glacier on the western coast of Greenland is one of the few things in the crysophere that can’t really be said to move at a glacial pace.
As ice flows from the center of Greenland to the edges, it gets funneled into low spots, forming outlet glaciers.
In some places where that funneling is extreme and the ground surface is slick, the ice behaves like toothpaste being squeezed from a tube.
These places are ice streams.

Almost seven percent of the Greenland ice sheet gets forced through the Jakobshavn Glacier.
This tremendous flow of ice makes Jakobshavn stand out—it once filled a fjord with a floating shelf of ice that was more than 35 km long.
Once, but no more.
That shelf has disappeared over the past 150 years as the glacier has receded; since the mid-1990s, it has retreated more than 10 kilometers. 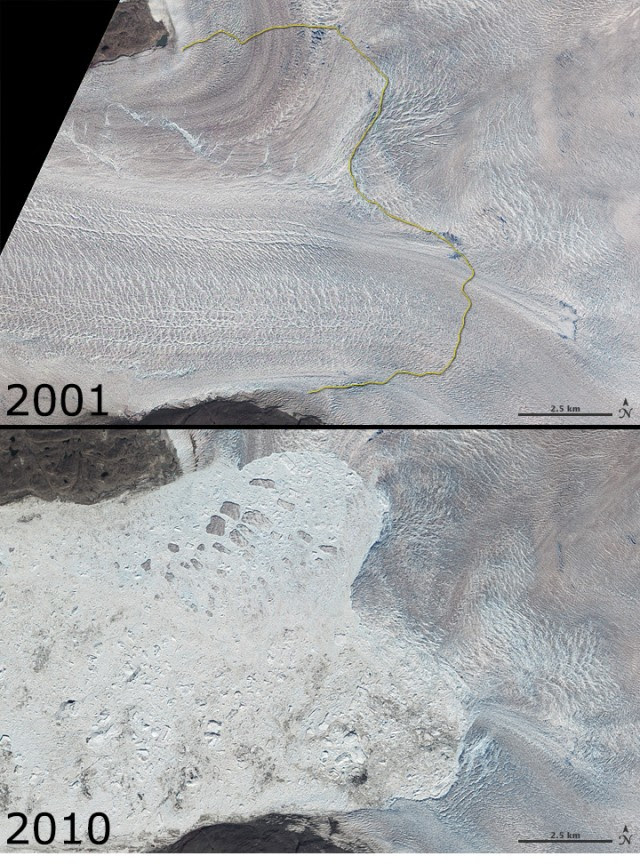 Satellite images of the Jakobshavn Glacier in 2001 and 2010.
source : NASA

Because so much ice moves through the Jakobshavn, it has been intensely studied.
Since 2009, the University of Washington’s Ian Joughin and several collaborators have been using the German Aerospace Center’s TerraSAR-X satellite to precisely track the glacier’s velocity.
(Records using other methods go back further.)
The satellite data reveals that the Jakobshavn got even faster over the past two years, setting a new glacial speed record at over 46 meters per day in the summer of 2012.
That’s almost 2 meters per hour.

So why the acceleration? It has to do with the topography beneath the ice.
Many factors that affect the flow of a glacier, and the conditions at the base make a huge difference.
Where the ground isn’t frozen (which is more common than you might think), water pressure counteracts some portion of the glacier’s weight, reducing the friction that slows the glacier.
Anything that raises that water pressure greases the skids and lets the glacier speed up.

Much of the bedrock beneath Jakobshavn’s final stretch is well below sea level and filled with seawater, though the ice is thick enough that it sits on the bottom rather than floating.
The ground below the end (or “terminus”) of the Jakobshavn isn’t flat, so as it retreats, the terminus finds itself in deeper or shallower water.
In 2012, it retreated into the bottom of a depression several hundred meters deeper than its previous location.
Since deeper water means higher water pressure, the ice there could flow more quickly, pulling on the ice behind it.
The peak flow rate near the terminus in the summer of 2012 was about four times faster than speeds in the mid-1990s.
The average speed for the year was nearly 3 times faster.

What goes down will come up in this case, and the terminus will soon retreat to the shallower backside of this depression, which should slow it down a bit.
The researchers believe that slower flow rate could last a few decades.
Beyond that high point, however, is a much broader basin.
Once the terminus starts to retreat into that basin, flow will ramp up again, surpassing even the current rate.
It will then likely retreat 50 km to the other side of the basin before the end of the century as the increased flow rate helps it shed more ice.
Between 2000 and 2011, the Jakobshavn Glacier alone lost ice equal to nearly 3 percent of global sea level rise.
As it retreats and shrinks further, it will continue to make a sizeable contribution because Jakobshavn is what a big glacier looks like on fast-forward.