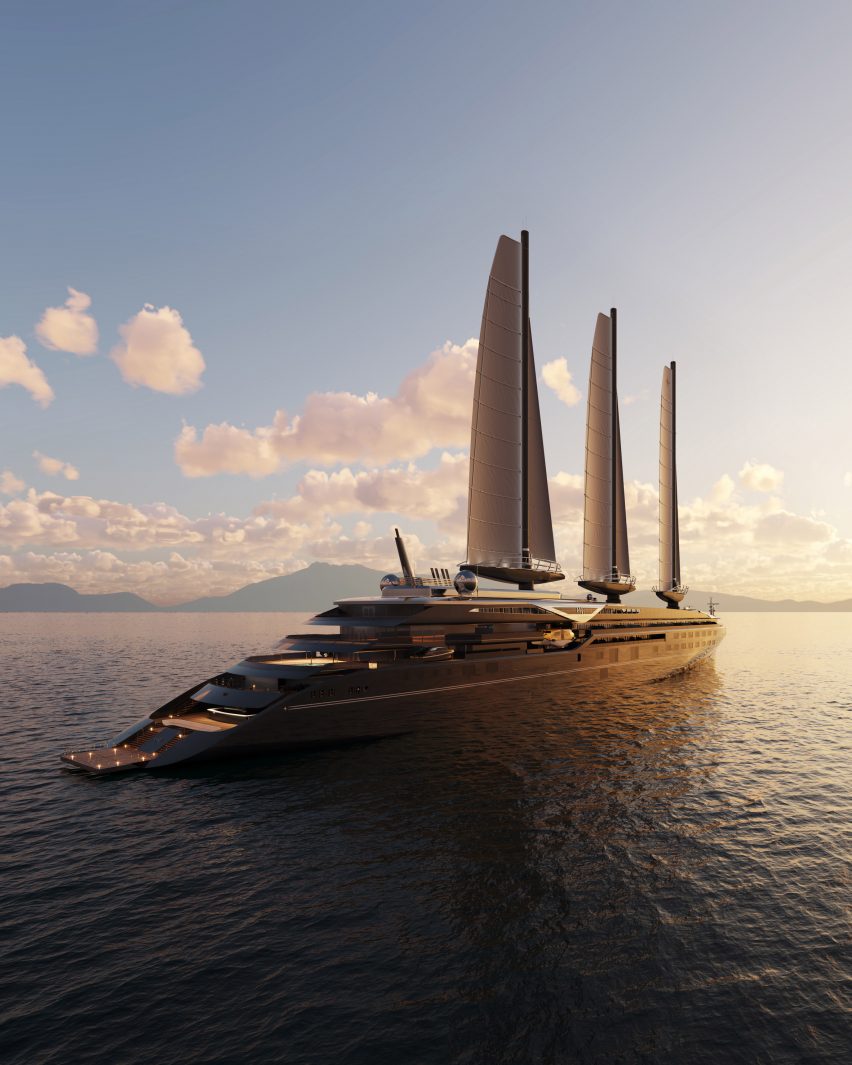 From Dezeen by Tom Ravenscroft

Set to be the "world's largest sailing ship", the Orient Express Silenseas will set sail in 2026 as the latest addition to the historic train line's brand.

Designed to be a continuation of the luxury Orient Express trains, the 220-metre-long ship will feature 54 passenger suites that will all be around 70 square metres, along with a large 1,415-square-metre presidential suite.

Facilities will include two swimming pools, a spa, two restaurants and a speakeasy bar.
Orient Express is launching the "world's largest sailing ship"

Built by shipbuilder Chantiers de l'Atlantique, the ship will be propelled by three rigid sails with a surface area of 1,500 metres each, which will power the ship during calm weather.
The sails will be supplemented with an engine powered by liquefied natural gas (LNG).
According to Accor the ship, which will be designed by Stirling Design Internationalwith interiors by D'Angeac, aims to replicate the splendour and comfort of the original Orient Express trains that ran across Europe from 1883 until to 2009.

"The interior design embodies a perfect balance between the past and the future, it is a tribute to the golden age of the French Riviera, with very futuristic lines and great technological innovation," D'Angeac told Dezeen.
"It perfectly embodies the Orient Express brand which with its 140 years of history has always been avant-garde."

The ship marks the latest launch under the Orient Express brand, which was acquired by hotel company Accor in 2017.
According to the brand, the first Orient Express trains in the 19th century were informed by ocean liners of the age, and the ship marks a return to these roots.

"With Orient Express Silenseas, we are beginning a new chapter in our history, taking the experience and excellence of luxury travel and transposing it onto the world’s most beautiful seas," said Accor chairman Sébastien Bazin.

"This exceptional sailing yacht, with roots in Orient Express' history, will offer unparalleled service and refined design spaces, reminiscent of the golden age of mythical cruises."

Along with Orient Express-branded hotels, the Accor group intends on relaunching a redesigned train that will run from Paris to Istanbul and will also have interiors designed by D'Angeac.
Links :
Posted by geogarage at 1:35 AM