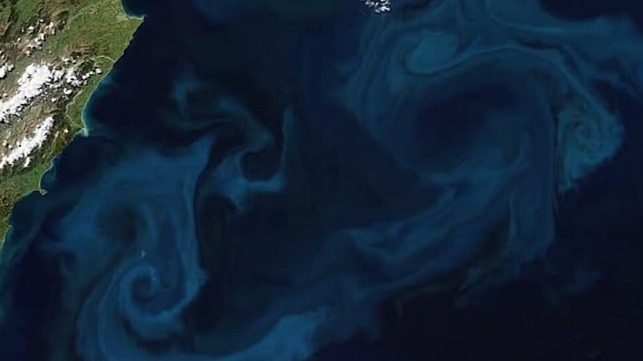 Phytoplankton can grow explosively over a few days or weeks.
Ocean fertilization is designed to supercharge that process to capture carbon dioxide, but it can have harmful affects for other marine life.
Robert Simmon and Jesse Allen/NOAA/MODIS
From The Conversation by Sonja Klinsky and Terre Satterfield
Humans could sink more carbon in the ocean to fight climate change, but should we?

Heat waves, droughts and extreme weather are endangering people and ecosystems somewhere in the world almost every day.
These extremes are exacerbated by climate change, driven primarily by increasing emissions of greenhouse gases that build up in the atmosphere and trap heat at the Earth’s surface.


With that in mind, researchers are exploring ways to pull carbon dioxide out of the atmosphere and lock it away – including using the ocean.
But while these techniques might work, they raise serious technical, social and ethical questions, many of which have no clear answers yet.

We study climate change policy, sustainability and environmental justice.
Before people start experimenting with the health of the ocean, there are several key questions to consider.
Ocean carbon dioxide removal 101

The ocean covers about 70% of the planet, and it naturally takes up carbon dioxide.
In fact, about a quarter of human-produced carbon dioxide ends up in the ocean.

Ocean carbon dioxide removal is any action designed to use the ocean to remove even more carbon dioxide from the atmosphere than it already does and store it.

It spans a wide range of techniques – from increasing the amount and vitality of carbon dioxide-absorbing mangrove forests to using ocean fertilization to stimulate the growth of phytoplankton that absorb carbon dioxide to building pipelines that pump liquid carbon dioxide into formations under the seabed, where it can eventually solidify as carbonate rock. 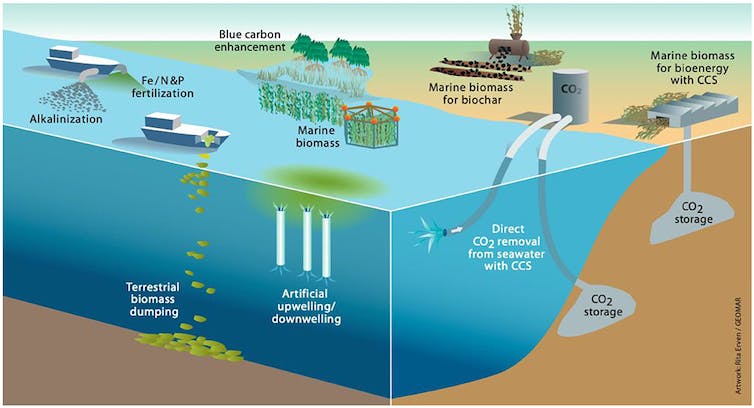 Methods of ocean direct carbon removal.
2021 Boettcher, Brent, Buck, Low, McLaren and Mengis, Frontiers, 2021, CC BY
There are other forms of carbon dioxide removal – planting trees, for example.
But they require large amounts of land that is needed for other essential uses, such as agriculture.

That’s why interest in using the vast ocean is growing.
Would these methods store enough carbon?

Initial evidence suggests that some forms of ocean carbon dioxide removal, such as those that rely on short-lived biomass like kelp forests or phytoplankton, may not keep captured carbon stored for more than a few decades.
That’s because most plant tissues are quickly recycled by decay or by sea creatures grazing on them.

In contrast, mechanisms that form minerals, like the interaction when carbon dioxide is pumped into basalt formations, or that alter the way seawater retains carbon dioxide, such as increasing its alkalinity, prevent carbon from escaping and are much more likely to keep it out of the atmosphere for hundreds or thousands of years.
Ecological risks and benefits

Research shows that some options, such as supporting mangrove forests, may promote biodiversity and benefit nearby human communities.

However, other options could introduce novel risks.
For example, growing and then sinking large amounts of kelp or algae could bring in invasive species.
Dissolving certain types of rock in the ocean could reduce ocean acidity.
This would enhance the ocean’s ability to store carbon dioxide, but these rocks could also contain trace amounts of metals that could harm marine life, and these risks are not well understood.

Each process could also release some greenhouse gases, reducing its overall effectiveness.
Interfering with nature is a social question

The ocean affects everyone on the planet, but not everyone will have the same relationship to it or the same opportunities to have their opinions heard.

Much of the global population lives near the ocean, and some interventions might impinge on places that support jobs and communities.
For example, boosting algae growth could affect nearby wild fisheries or interfere with recreation.
People and communities are going to evaluate these risks differently depending on how they are personally affected.

In addition, people’s trust in decision-makers often shapes their views of technologies.
Some ways of using the ocean to remove carbon, such as those close to the shore, could be governed locally.
It’s less clear how decisions about the high seas or deep ocean would be made, since these areas are not under the jurisdiction of any one country or global governing body.

People’s perceptions will likely also be shaped by such factors as whether or not they see ocean carbon dioxide removal as interfering with nature or protecting it.
However, views of what is acceptable or not can change.
As the impacts of climate change increase, tolerance for some unconventional interventions seems to be growing.
It’s also an ethical question

Ocean carbon dioxide removal also raises a variety of ethical questions that do not have straightforward answers.

For example, it forces people to consider the relationship between humans and nonhumans.
Are humans obliged to intervene to reduce the impact on the climate, or ought we avoid ocean interventions? Do people have the right to purposefully intervene in the ocean or not? Are there specific obligations that humans ought to recognize when considering such options? 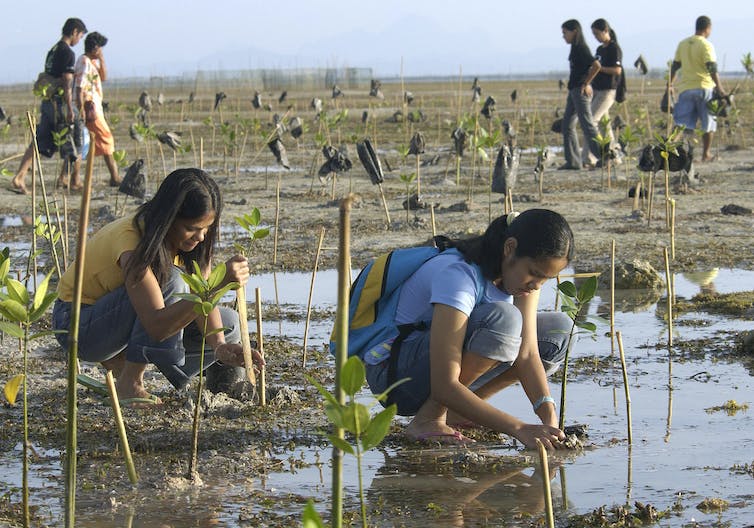 Volunteers plant mangrove saplings in the Philippines.
Romeo Gacad/AFP via Getty Images
Other ethical questions revolve around who makes decisions about ocean carbon dioxide removal and the consequences.
For example, who should be involved in decision-making about the ocean? Could relying on ocean carbon dioxide removal reduce societies’ commitment to reducing emissions through other means, such as by reducing consumption, increasing efficiency and transforming energy systems?
Who pays?

For example, mining and then adding rocks to reduce the ocean’s acidity has been estimated to cost between US$60 and $200 per ton of carbon dioxide removed.
To put that into context, the world produced more than 36 billion metric tons of carbon dioxide from energy alone in 2021.

Even macroalgae cultivation could be in the tens of billions of dollars if done at the scale likely necessary to have an impact.

These methods are more expensive than many actions that reduce emissions right now.
For instance, using solar panels to avoid carbon emissions can range from saving money to a cost of $50 per ton of carbon dioxide, while actions like reducing methane emissions are even less expensive.
But the harm from continued climate change has been estimated to be in the hundreds of billions annually in the United States alone.

These costs raise more questions.
For example, how much debt is fair for future generations to carry, and how should the costs be distributed globally to fix a global problem?

Ocean carbon dioxide removal could become a useful method for keeping global warming in check, but it should not be seen as a silver bullet, especially since there isn’t an effective global system for making decisions about the ocean.
Links :
Posted by geogarage at 1:34 AM