A cruise ship sails in front of Margerie Glacier in Glacier Bay, Alaska.
Photo credit: Tim Rue/Bloomberg via Getty Images
From CNN by

Editor's Note — Monthly Ticket is a new CNN Travel series that spotlights some of the most fascinating topics in the travel world.
In April, we're setting course for the diverse world of cruises.
Whether you're looking for travel inspiration or insider knowledge, Monthly Ticket will take you there.
(CNN) — Navigating a colossal ship is no mean feat under any conditions, but certain routes, like the sandstorm-prone, narrow Suez Canal -- infamously blocked by a container ship last year -- or the windy, glacier-lined waterways of Alaska, are particularly challenging.
Andy Winbow, a master mariner who has helmed vessels across the globe, tells CNN Travel that trickier routes are often characterized by "adverse weather conditions, a lack of room to maneuver due to natural hazards and a lack of navigational aids."
These factors will impact any vessel, but multi-decked cruise ships can be more affected due to their sheer bulk.

"The higher the ship, the bigger the windage," is how David Pembridge puts it.
Pembridge is a retired cruise ship captain who worked for decades on ships operated by P&O Cruises and Princess Cruises.
When tall ships are buffeted by wind, they're prone to slide slipping -- a term used to describe a ship that's being blown sideways.
To counteract this effect, the ship has to be steered at an angle.

This maneuver is extra tricky when traversing a waterway like the Suez Canal or the Panama Canal.
In these narrow channels, ships should also avoid hitting the sides of the canal.
"If they go through at speed, it causes erosion of the banks, and drags some of the sand away from the sides and into the center of the canal, which is no good because it makes it less deep, so it causes shallowing," explains Pembridge.
A cruise ship navigates through the Panama Canal on April 23, 2022.
LUIS ACOSTA/AFP/AFP via Getty Images
While the Suez Canal and the Panama Canal have some unifying features, there are also key differences between the Egyptian waterway and the South American channel.

Where the Panama Canal is largely bordered by forest and vegetation, the Suez is flanked by flat desert, meaning there's potential for poor visibility caused by sandstorms.
And while the 120-mile Suez is largely straight, the roughly 50-mile Panama Canal "winds in and out of islands," as Pembridge puts it, with this topography adding another dimension to the challenge.
"It's a different sort of difficulty, but it still requires fairly intense concentration going through there," explains Pembridge.
Ships traversing the Panama Canal must also pass through three different sets of locks.
In more recent years the locks were widened to better accommodate bigger ships, but when Pembridge was sailing the route regularly, his vessel would be separated from the sides of the lock by only a couple of feet.
In Panama, mechanical locomotives also help tow cruise ships through the locks, while in especially narrow sections of the Suez, tug boats help guide larger ships.

"It's normally a long day for the team on board, because you start and you don't stop until you get through the other end," says Pembridge of passing through both channels.

The role of the pilot
Cruise ships are helped down the Suez Canal by local expert seafarers, called marine pilots.
Soeren Stache/picture-alliance/dpa/AP
All vessels operating in the Suez and the Panama are aided by local mariners.
These seafarers, known as marine pilots, board the ship at the start of the channel and work together with the on board crew to ensure safe passage.
The Suez Canal and the Panama Canal are both "compulsory pilotage areas" -- meaning pilots aren't optional, they're required by law.
Pembridge suggests the working relationship between pilots and captains isn't always smooth sailing.
"That's one of the helps, and one of the hindrances, at times, depending upon the level of competency and personalities involved," he says.

"The pilot legally must direct the cause and speed of the vessel.
But at the same time, the master of the vessel always has the responsibility for the safe navigation of the vessel and that can't be abrogated to the pilot."
In some areas, the pilot's role is less crucial, and not necessarily a legal requirement.
But in more challenging ports and waterways -- such as Suez and Panama, or the waterways around Alaska, their role is essential. 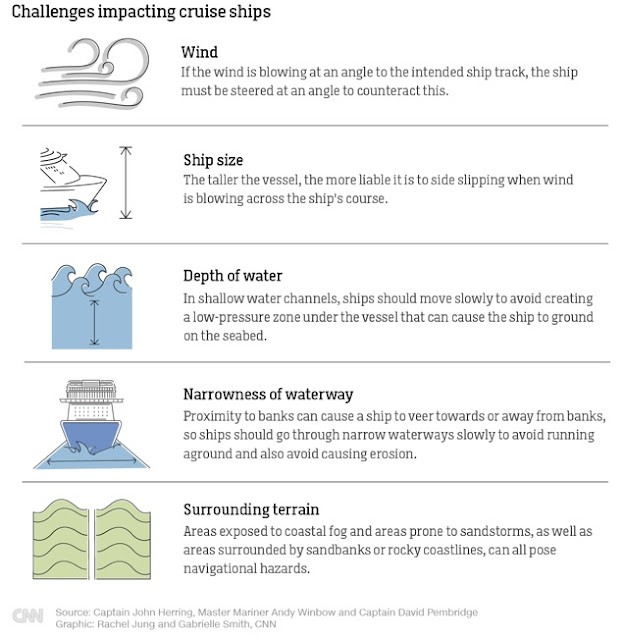 Captain John Herring was captain of a research vessel before he become a marine pilot in southeast Alaska.
Herring tells CNN Travel there are two key reasons why pilots need to be on board ships in certain areas.
"First, we provide local knowledge of route dangers, tides and currents, weather, concentrations of marine life, and more," he explains.
"Second, being independent from the ship, we bring objective decision making not subject to the economic pressures of the ship's schedule.
Captains are experts on their own ships and we are experts on Alaskan waters."
Southeast Alaska is a compulsory pilotage area, partly because it's prone to strong winds and currents, and partly because of its marine ecosystem.
"Alaska coastal waters are blessed with an abundance of marine mammals," says Herring.
"Whale watching is a favorite pastime for passengers, but it requires constant vigilance on the bridge to avoid close encounters."
Similarly, spotting icebergs and glaciers might be a highlight of an Alaskan cruise, but these icy formations can cause difficulties for vessels.
"That ice is hard and can damage the hull or propellers," explains Herring, adding that strong winds and currents make navigating icy waters even harder.

In recent years, technology has advanced, making navigating unpredictable routes a bit easier for vessels.
But Herring suggests pilots are still integral in the age of satellite technology.

"The local pilot can still bring the ship safely to port without GPS," he says.

Depth of water and local topography
The fjords and channels of Chile, including the Murray Channel in southern Chile, pictured here, can pose particular challenges for vessels.
Wolfgang Kaehler/LightRocket/Getty Images
Ships sailing around Alaska must also contend with varying water depths.
In shallow water channels, ships need to move slowly to avoid creating a low-pressure zone under the vessel that could cause the ship to ground on the seabed.
"Ships can 'squat' if traveling too fast and thus have insufficient clearance under the keel," is how master mariner Andy Winbow explains it.
Cruise routes around the Norwegian fjords and the fjords and channels of Chile also involve navigating occasional shallow waters.

Can you steer a ship through the Suez Canal?
Try our interactive
Other cruise ship routes present issues because their topography is constantly changing.
Pembridge gives the example of the Amazon River, sections of which are sometimes traversed on South American cruises.

"The bottom of the Amazon moves around continuously and so on a nautical chart it will show an island, and when you get there the island won't be there, it'll have moved somewhere else," he explains.
"It's very much dependent on the pilots then -- the local pilots are people that know the river and know how it's moved."
City ports can also pose challenges.
Pembridge points to the Dutch ports of Amsterdam and Rotterdam and the German port of Hamburg, as well as Ho Chi Minh City in Vietnam.
To dock in any of these cities, cruise ships must first traverse a narrow channel, and how easy that is largely depends on weather conditions.

Planning and unexpected moments
Pembridge took this photo of one the Panama Canal locks while at the helm of P&O Cruises' MV Aurora cruise ship.
David Pembridge
A solid voyage plan is essential to smooth sailing.
Pembridge explains that cruise ship passage plans are usually devised by a junior officer, and then approved by the captain.
Plans will always take into account any known potential challenges -- like wind, width of waterway, tides and surrounding terrain.

"If you're in open ocean, it's a relatively simple briefing -- this is the course we intend to take, this is the speed we intend to be doing.
Once you get closer to land, and it becomes more involved, then you start to highlight dangers, any currents, and the likely weather effects of anything," says Pembridge.
"And then as you get into really confined waters -- which is what the [Suez and Panama] canals are -- then it's a much more intense briefing."
The threat of piracy is another factor that's taken into consideration, although Pembridge suggests it's less of an issue than it once was.
He recalls helming ships that sped through the Gulf of Arden at flank speed, turning lights out at night and organizing passenger drills.
Captain David Pembridge, who retired in 2020, pictured near Chile's Cape Horn.
David Pembridge
Weather is also taken into account when voyage planning, but all the preparation in the world can't totally account for the unexpected.
Pembridge recalls a time he was captaining a ship sailing from the Falkland Islands towards South America.
Wind was forecast to be strong, but when night fell, the violent gusts were much fiercer than expected.
All through the night, Pembridge and his team slowly angled into the waves to try and counteract the impact of the wind.
When daylight drew in, they saw the extent of what they were dealing with.

"They were very, very big waves.
And the front of the ship was burying itself into them and coming up again, it was perfectly safe, but very uncomfortable."
By the time the weather had receded, the ship had veered some 30 miles off course.
Ports had to be rearranged and the voyage replanned.
But Pembridge points out that while vessels might encounter unexpected challenges, the vessels and the people in charge are generally prepared for obstacles.
"Modern cruise ships are well equipped to deal with pretty much all of the challenges that come their way," says Pembridge.
Links :
Posted by geogarage at 1:04 AM