After a US attack sub hit an underwater mountain, we look at what's happening on the ocean floor

The Seawolf-class fast-attack submarine USS Connecticut (SSN 22) departs Puget Sound Naval Shipyard for sea trials following a maintenance availability.
Photo: Thiep Van Nguyen / U.S. Navy
From FoxWeather by Aaron Barker
Water covers about 71% of the planet and oceans hold about 96% of that water, according to the United States Geological Survey.

Underneath all that water lies worlds unto their own – towering mountains, cavernous trenches and plains in between.
As it turns out, we don’t know as much about the underwater part of Earth as many would think.

The USS Connecticut, an attack submarine, ran into one of those mountains late last year in the South China Sea.

The USS Connecticut, which had its sonar dome damaged in a collision with an underwater seamount, pulls into Naval Base Kitsap-Bremerton
Meegan M. Reid/Kitsap Sun
A satellite image shows the USS Connecticut nuclear submarine moored in Guam for receiving prelimanary repairs.
Photo: Weibo
The Navy Times reported last week that the sub's sonar dome and main ballast tanks were damaged. Navy officials said "adherence to required procedures in navigation planning" was one of the things that could have prevented the collision, according to USNI News. 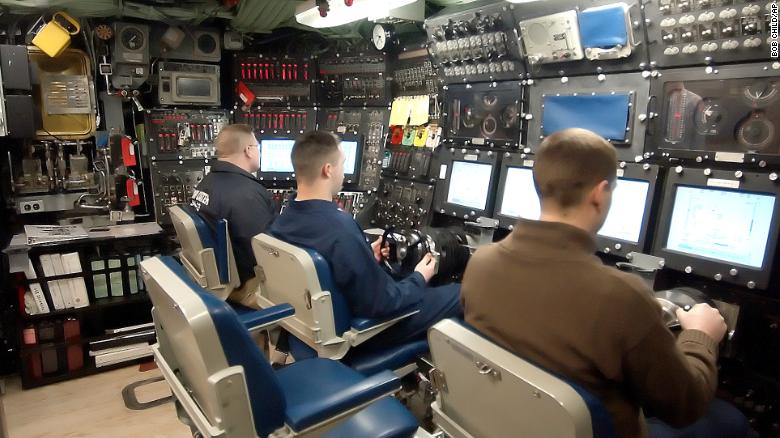 Glen Rice, a physical scientist with NOAA’s Ocean Service and the Office of Coast Survey, said that he doesn't know why the Connecticut ran aground, but did say there is plenty about the ocean floor that we still don't know.
"There's a, you know, a common saying: We know more about the surface of Mars than we do about, you know, the deep ocean on our own planet," Rice said.
Rice is part of a team at NOAA whose job it is to develop maps of the sea floor and allow vessels to safely navigate the water.
He said there is a plethora of instruments scientists use to survey the ocean floor, such as sonar, lasers, airplanes and satellites.
It all depends on how much detail is desired and the depth of the ocean floor.
"You could also use satellite-derived imagery, which is using more like pictures, and you're using kind of how the light changes as it goes through the water," Rice said.
"As you move away from that really shallow-water environment or in places where it's murky, you really need to use sound a lot of the time because that penetrates much better."
What’s down there?

Less surprising is the fact that the deepest point on the planet is in an underwater trench.
The Mariana Trench is a 1,500-mile long canyon, located in the Pacific Ocean east of the Philippines.
According to NOAA, it is 35,900 feet deep at its deepest point called Challenger Deep.
That’s nearly 7 miles.

The longest mountain range on Earth is also underwater.
The mid-ocean ridge system spans more than 40,000 miles across the globe, according to NOAA.

In between mountains and trenches, are seamounts, abyssal plains and hills, which lead to continental shelves – the shallowest parts of the ocean. 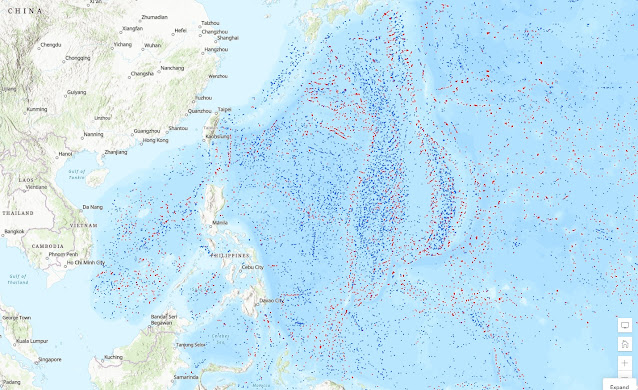 Alberto Neves, the hydrographic science program coordinator at the University of Southern Mississippi, said most of the ocean floor is unmapped.
"Well, there is an estimation that only 20% of the bottom of the oceans are surveyed, which means that we don't know about 80% of what's in there," Neves said.

Neves said there are various measurements of the ocean floor out there, but they don’t provide a complete picture of the bottom of the ocean.

"In general, when you look at the Google Maps and you see those beautiful features -- but in fact, some of them are estimated to exist or others we don't know."
Closing the map gap

Neves said there is an international project to remedy that problem called Seabed 2030.
Launched in 2017, the goal is to have 100% of the ocean floor mapped within the decade.

"It (has had) a lot of impact already," Neves said. "About four years ago, we had only 6% of the bottom of the ocean surveyed, and we are getting closer to 20% thanks to this international effort."

Some of the 20% that is mapped has some striking detail.
Rice said he is part of the team working on the National Bathymetric Source project, which aims to collect the best-available data to create high-resolution nautical charts.
"Where you have contours, are generally what you call them on topographic maps, we call them depth curves, I think traditionally on a chart," Rice said.
"Then we tend to put a lot of soundings in there because, you know, that helps call out specific features."
Rice said the higher the resolution of a map, the better it can help not only vessels navigate the water but also policy makers better manage the resources that are there.