This juvenile sperm whale died near San Jorge Island, Portugal. A team organized by the British Broadcasting Corporation gave it a second life as a character in Blue Planet II, and as the site for an extreme experiment in the deep sea.
Photo by the Rebikoff-Niggeler Foundation

By sinking a dead whale to the bottom of the ocean and studying what comes to visit, scientists are learning more about how deep-sea ecosystems are related.by Fanni Szakal
“You cannot study in any university how to sink a whale,” says Frank Wirth.
“You just have to be creative.”

On a regular day, Wirth runs Pico Sport, a whale watching company in the Azores.
But on this unusual summer day in 2015, Wirth is on a chartered sand barge off the coast of Fayal Island, Portugal, guiding his team as they attach specially molded weights to the flukes of a dead juvenile sperm whale.

“You have to lift these 500-kilogram blocks one by one, and you never know when you reach the point that the whale goes down,” he says.
Finally, after the 16th block—eight tonnes—the whale starts to sink. It stands up on its end—just “like the Titanic,” says Wirth, “exactly like you see in the Leonardo DiCaprio movie”—lets out a big belch, and disappears.
“You don’t want to know what that smells like,” he adds.
Wirth was pulled away from his day job when he was approached by the British Broadcasting Corporation (BBC).
The BBC was filming Blue Planet II, and the documentary team wanted help sinking the body of a juvenile sperm whale that had been found floating near Portugal’s San Jorge Island to the seafloor 760 meters below the surface.
The sunken whale offered one of the most impressive shots in the Blue Planetseries.
But now, years later, follow-up research on the carcass has brought scientists closer to understanding how life colonizes the deep.
Life on the seafloor is sparse.
Most known deep-sea life concentrates around key sites like hydrothermal vents, seamounts, and cold seeps that are separated by hundreds of kilometers of cold, dark, nutrient-sparse desert.
Remarkably, despite the vast distances, organisms seem able to disperse from hotspot to hotspot.
One possible explanation is that they use whale falls as way stations—stepping stones of abundance in the darkness.
To study the value of these decaying rest stops, the BBC team reached out to Daphne Cuvelier and her colleagues at the University of the Azores.
The whale Wirth and his team were sinking offered a unique opportunity.
Previously, scientists had sunk cow carcasses off the coast of Portugal, humpback whale bones near Brazil, and alligators in the Gulf of Mexico.
But no one had ever sunk a carcass for science in the middle of the Atlantic Ocean.
Within just 25 minutes of the whale hitting the bottom, an attached camera recorded the arrival of the first scavenger, an enormous sixgill shark.
The next day, during the first dive of LULA1000, a submersible operated by the Rebikoff-Niggeler Foundation, several other sharks joined the feeding frenzy.
The sharks attacked and pushed against the submersible—perhaps to ward off the perceived competition. 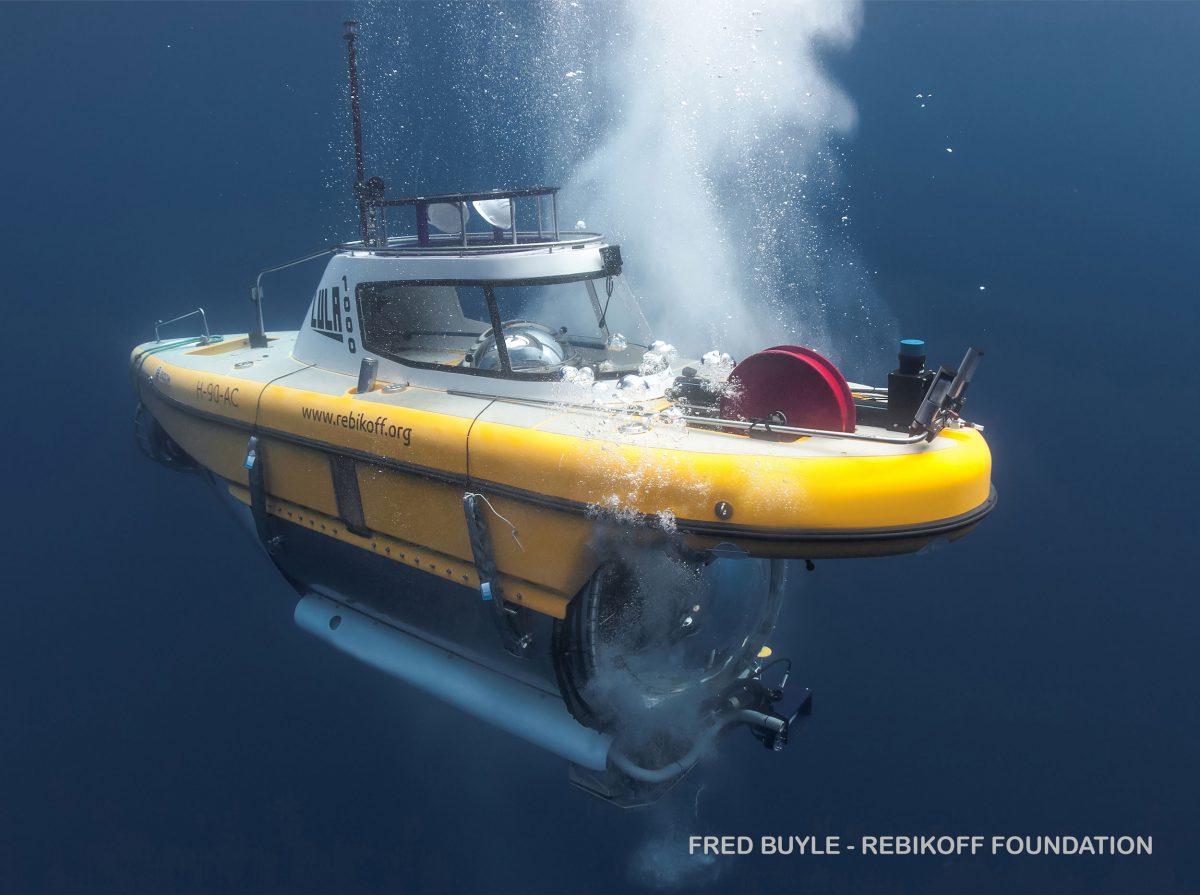 Scientists and videographers from the British Broadcasting Corporation used the submersible LULA1000, operated by the Rebikoff-Niggeler Foundation, to travel to and film a sunken sperm whale carcass near San Jorge Island, Portugal.
Photo by the Rebikoff-Niggeler Foundation
“It was one of the best diving moments that we’ve ever had,” says Kirsten Jakobsen, the cameraperson of LULA1000, who has more than 20 years of diving experience.
“We’re sitting inside, and there are these big sharks coming up and bouncing against the window, checking us out with really big eyes.”

Over the course of a year, the research and film team descended to the carcass six more times.
On the last dive, one year after the whale was sunk, Cuvelier joined the team in the submarine.
“I had this huge sense of calm,” she recounts.
“As you go down, it gets darker and darker, and you get to see plankton swarms and some really strange fish.”

At the bottom, the team filmed and sampled the now-exposed skeleton of the whale, picked clean by the creatures of the deep.
Polychaete worms were searching for the last pieces of flesh on the bones, and a few stray crabs were crawling around.
The carcass also acquired an eerie black halo as the decomposing tissue depleted the oxygen in the surrounding sediment.

Years on, Cuvelier and her team’s analysis of the denizens of this deliberately sunken whale have revealed a potential overlap between the polychaete worm species that colonized the cow bones off Portugal and the whale bones near Brazil, suggesting that a dead whale in the mid-Atlantic could indeed be a stepping stone connecting the two sides of the ocean.

Maurício Shimabukuro, a researcher at the University of Southern Denmark who was not involved in the study, says that to confirm this finding Cuvelier and her team will need to collect some of the worms and study their DNA.
“For the tiny animals that live in whale bones, the morphological traits to identify [species] are sometimes tricky,” Shimabukuro says.
“There are a lot of cryptic species that look the same but genetically are different.”

Cuvelier wants to fill this gap, too.
She also hopes to deploy more whale bones to sample and identify more deep-sea organisms.
But that work is dependent on shoring up enough funding—or hitching another ride with the BBC.
Posted by geogarage at 1:46 AM