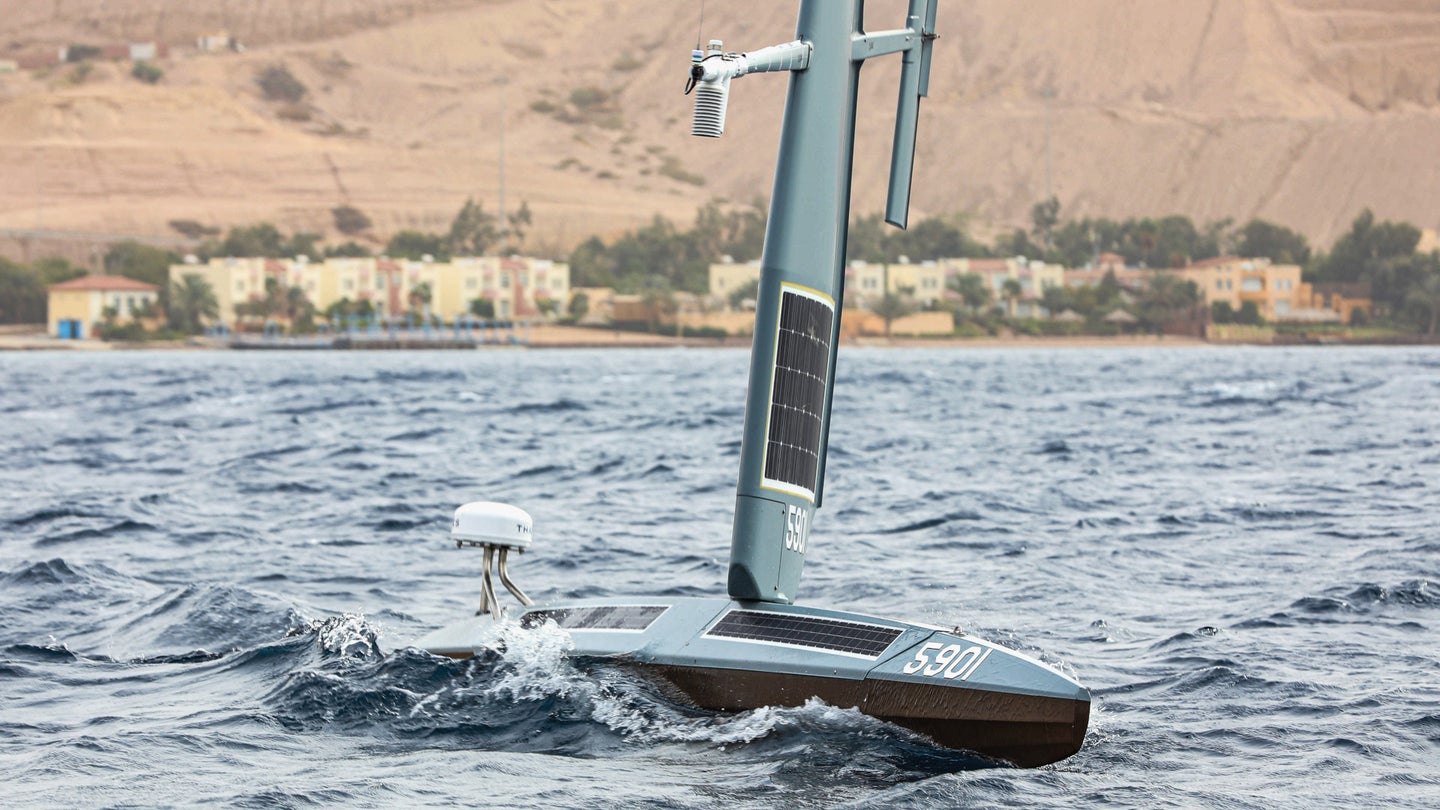 US Navy Share
From The Drive by Joseph Trevithick
The sailboat test is part of an effort to learn how unmanned platforms can help in the Middle East and, eventually, globally.

The U.S. Navy has kicked off an operational test of a wind and solar-powered Saildrone Explorer unmanned surface vessel in the Gulf of Aqaba at the northern end of the Red Sea.
Linked into a network that makes use of artificial intelligence and machine learning capabilities, these drone sailboats could be a valuable new tool to help keep an eye out for maritime threats in the region and beyond.

Gulf of Aqaba with the GeoGarage platform (NGA nautical raster chart)
Navy personnel assigned to Task Force 59 launched the Saildrone Explorer on its first mission in the region, which is part of a demonstration exercise nicknamed Digital Horizon, from the Royal Jordanian Navy base at the Port of Aqaba on Dec. 12, 2021.
The service established this task force within its existing command structure in the Middle East, typically referred to collectively as U.S. 5th Fleet/Naval Forces Central Command, or 5th Fleet/NAVCENT, in September.
It is, at present, primarily a testbed unit intended to help rapidly explore the integration of new unmanned and artificial intelligence (AI) capabilities into Navy operations in the region. 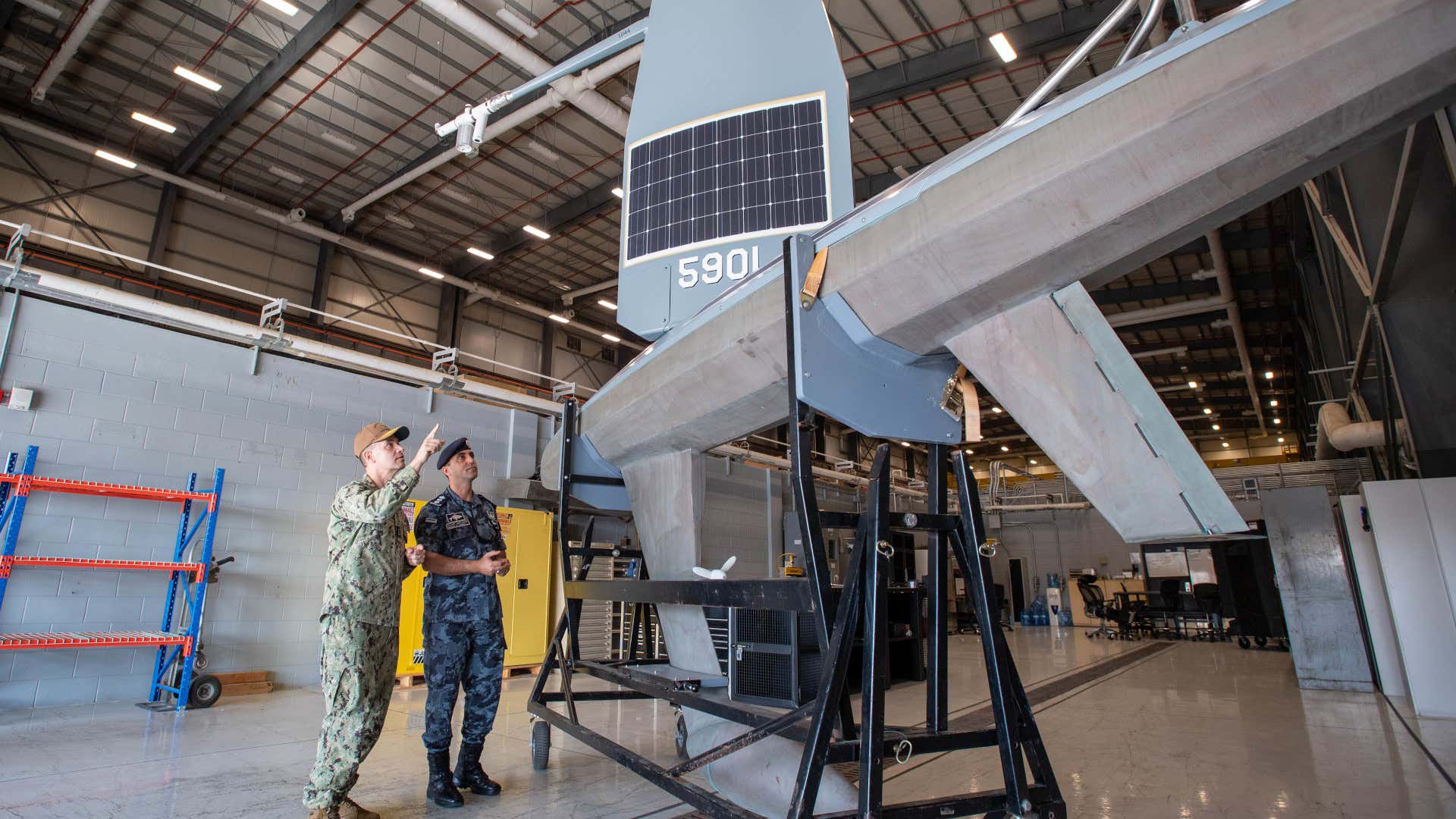 Saildrone's Explorer design, the smallest of the California-headquartered company's offerings, presents a potentially ideal platform for persistently monitoring littoral and open-ocean areas.
Developed initially for collecting various kinds of oceanographic data, the 23-foot-long unmanned vessel uses wind power for propulsion and solar power for its sensor package.
Though these drone sailboats have an average speed of only three knots, Saildrone says they have an effectively unlimited range and are designed to operate autonomously for at least a year, even through periods of extreme weather.
The actual maximum endurance would be determined by the exact configuration.

The Navy has not said what sensors or other systems are on the Explorer that is now taking part in the Digital Horizon demonstration.
Saildrone's website says the electro-optical cameras with some degree of machine learning-enabled automatic target detection, as well as various oceanographic sensors, are available for this design, with radars and other capabilities found on its larger offerings.

A group of Saildrones with various full-motion video cameras, including night vision or thermal imaging capable types, networked together and with links to other vessels and command centers ashore, might be useful to the Navy for detecting and tracking threats or potential threats, as well as just improving overall persistent situational awareness within a specific area.
Automated target recognition and other capabilities that make use of AI or machine-learning algorithms could add to their utility.

These drone sailboats would also be able to provide these kinds of capabilities without the need to deploy significant numbers of more traditional assets or personnel or the costs associated with doing so.
Right now, the Navy has a limited capacity to conduct more persistent small boat operations, including surveillance and presence missions, across larger areas.
The service is also planning to eliminate its fleets of Mk VI and Cyclone class patrol boats entirely, supplanting them, at least in part, with examples of its two subclasses of littoral combat ships (LCSs).
However, LCSs cost tens of millions of dollars to operate and maintain annually.
In 2018, Bloomberg reported that Saildrone's products could be operated for as little as $2,500 per day, or $30,000 per year, for scientific purposes.

With all of this in mind, Navy Saildrone Explorer could be a valuable addition to the service's capabilities in the Gulf of Aqaba, which touches Israel to the north and Egypt's Sinai Peninsula to the west, as well as Jordan to the East.
It is an important link to the Red Sea for Israel and Jordan, both for naval operations and commercial shipping, with the Port of Aqaba being the latter country's only major port facility. 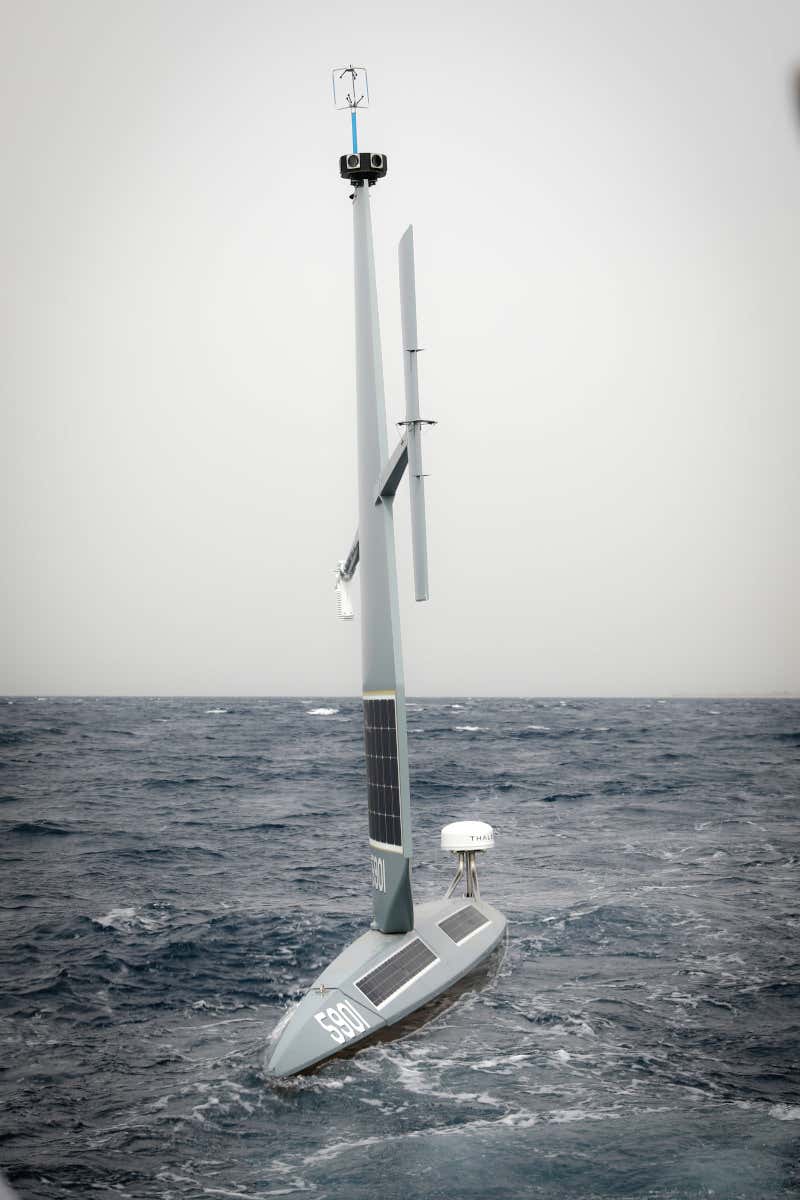 U.S. Navy
The Navy's Saildrone Explorer out on the water in the Gulf of Aqaba.

It is also a potential chokepoint, something that could be of concern as various types of threats in and around the Red Sea from Iranian-backed Houthi militants in Yemen, as well as Iran itself, continue to grow.
The Houthis have already demonstrated their proficiency in using unmanned, explosive-laden boats, as well as suicide drones, ground-launched cruise and ballistic missiles, and naval mines, to threaten naval vessels, commercial ships, and coastal infrastructure, among other targets, in and around neighboring Saudi Arabia.
There have been clear indications that the Houthis, together with Iranian forces themselves, might be working to extend the reach of those threats north, including bringing them within range of southern Israel.

Of course, additional persistent maritime situational awareness could be useful elsewhere in the Middle East beyond the Gulf of Aqaba.
This includes operations in the Bab Al Mandeb Strait, at the southern end of the Red Sea, and the Strait of Hormuz, which links the Persian Gulf to the Gulf of Oman.
These are two other highly strategic chokepoints in the region where Iran and its proxies present real threats. 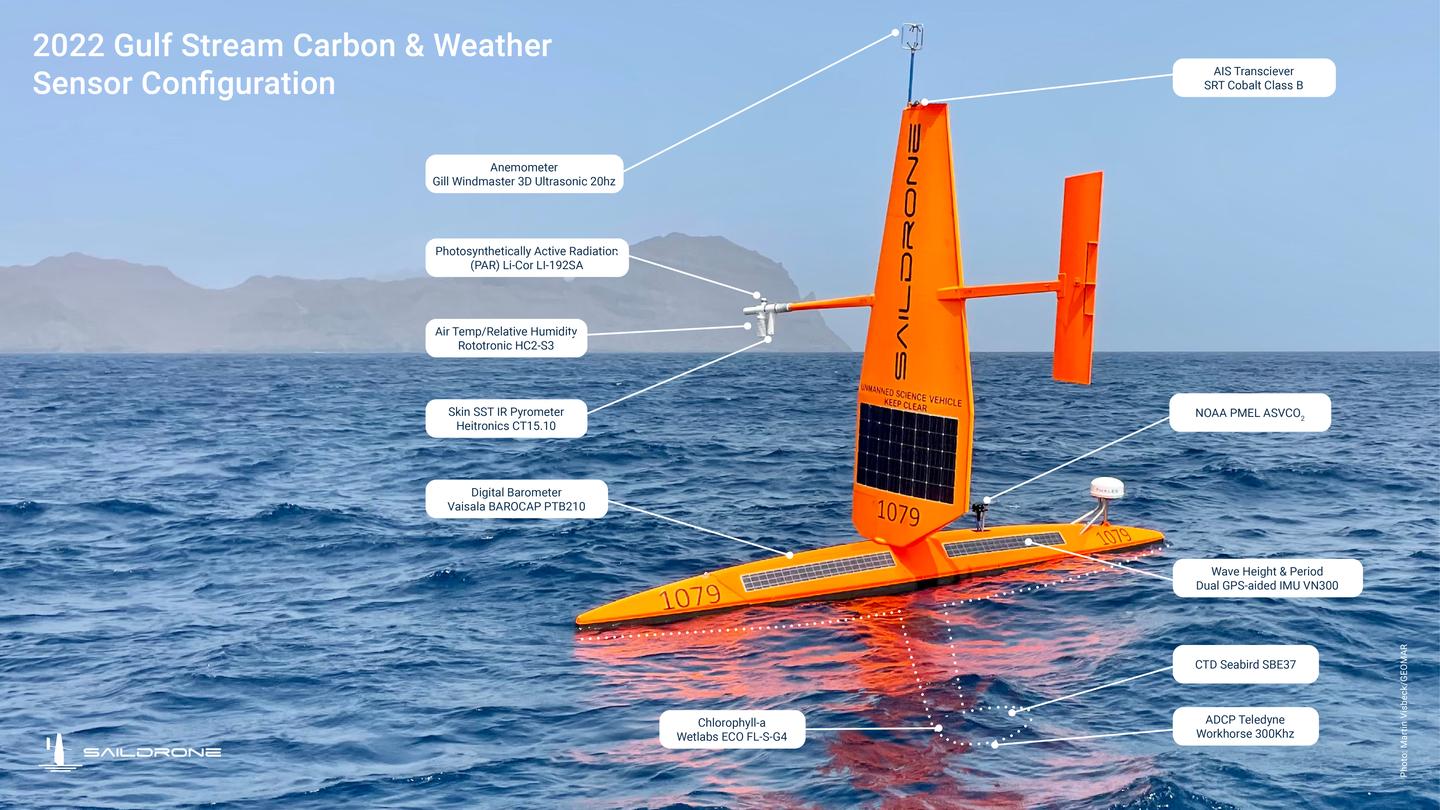 Graphic showing details of the sensors on the Saildrone Explorers in the 2022 Gulf Stream mission
Beyond that, it would seem very likely that the outcome of the Digital Horizon demonstration could have implications for how the Navy might deploy these drone sailboats elsewhere around the world.
If the testing in the Gulf of Aqaba shows promise, it would not be hard to imagine the service being interested in using Saildrone Explorers for similar missions in broad expanses of the Pacific, among other areas.

Task Force 59's activities in the Middle East are almost certain to have impacts on the service's larger unmanned plans.
This operational test of the Saildrone Explorer is only one example of the work the unit has been doing already since its activation just three months ago.
It completed its first unmanned integration exercise in the Persian Gulf back in October.
That event saw a Maritime Tactical Systems, Inc., (MARTAC) MANTAS T12 unmanned surface vessel work with Navy and Coast Guard Patrol boats, as well as an MH-60S Sea Hawk helicopter and a V-Bat drone.
Forces from the Bahraini military also participated in the exercise, which was nicknamed New Horizon.

The T12 is a speedboat-like unmanned design and the Navy's example in the Middle East has been seen equipped with a sensor turret containing full-motion video cameras.
Task Force 59 has described the 12-foot-long T12 in the configuration they are testing as another potential way to improve "maritime domain awareness," just as with the Saildrone Explorer. 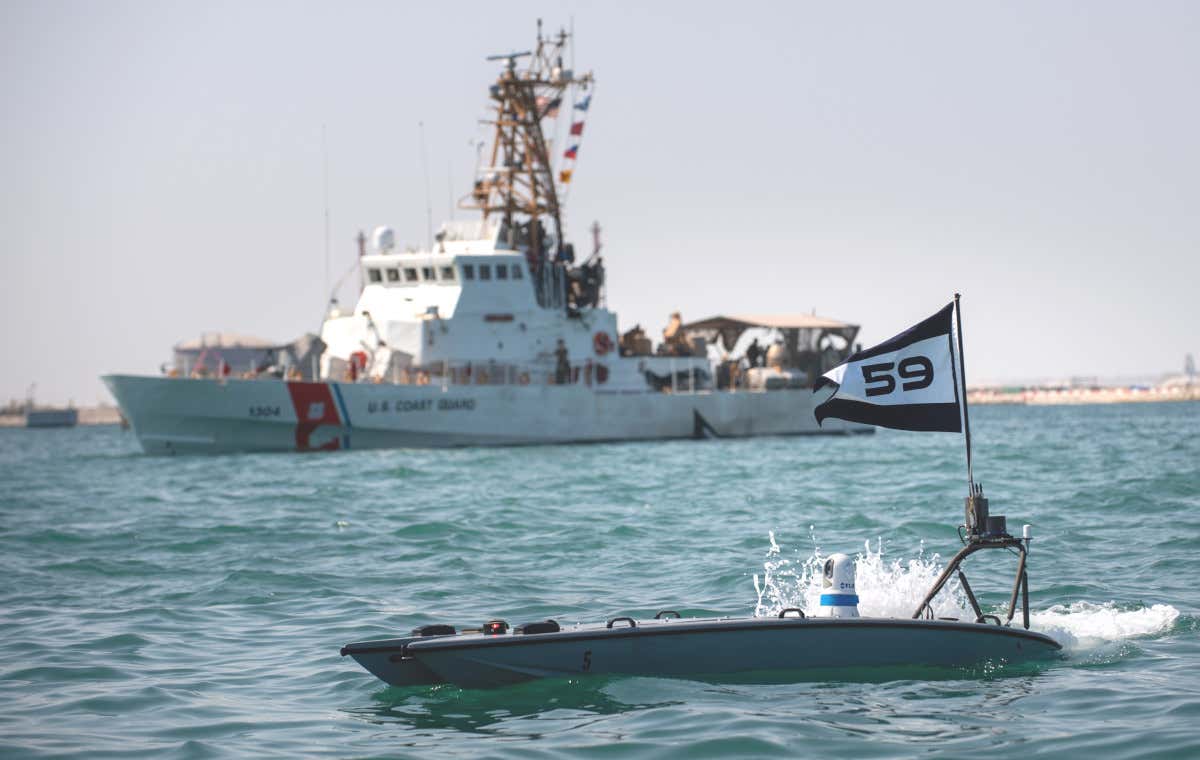 USN Task Force 59's MANTAS T12 sails together with the US Coast Guard's Island class patrol boat USCGC Mauiduring the New Horizon exercise.
“This is a significant milestone for our new task force as we accelerate the integration of unmanned systems and artificial intelligence into complex, cross-domain operations at sea,” Capt.
Brasseur, Task Force 59's commander, said in a statement at the conclusion of the New Horizon exercise.
“Real-world evaluation is essential.”

Earlier this month, Task Force 59 conducted another similar test in the Persian Gulf with a MARTAC Devil Ray T38 unmanned surface vessel.
The T38 shares a general shape with the T12, but is significantly larger at 38 feet in overall length. 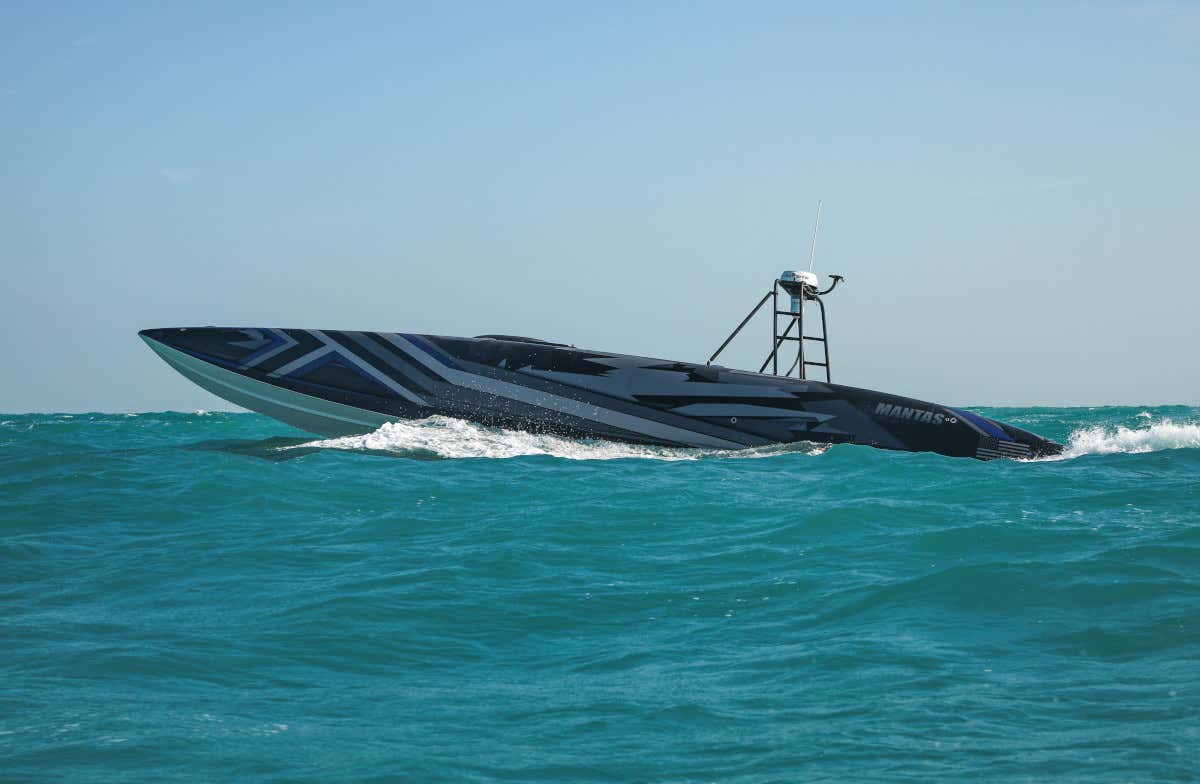 U.S. Army
A Devil Ray T38 unmanned surface vessel in the Persian Gulf during a test in December 2021.
The Navy, as a whole, is increasingly exploring ways to increasingly integrate unmanned surface vessels of various types, as well as unmanned underwater vehicles and drones, into its concepts of operation.
Earlier this year, the service conducted a massive manned-unmanned teaming event, known as Unmanned Integrated Battle Problem 21, or UxS IBP 21, off that coast of Southern California.
UxS IBP 21 featured a variety of different platforms working together to conduct a number of different simulated missions, including the targeting of a mock surface vessel with an SM-6 missile.
The Navy plans to conduct more demonstrations like this in the near future.

The new test of the Saildrone Explorer in the Gulf of Aqaba, together with the previous operational demonstrations of the T-12 and T-38, shows that Task Force 59 is already conducting important work despite having only been in existence for a matter of months.
The unit's activities are set to help pave the way for increasingly routine use of unmanned platforms for surveillance and other missions in support of Navy operations in the Middle East and beyond.
Links :
Posted by geogarage at 1:58 AM