‘Our boat was surrounded by dead bodies’: witnessing a migrant tragedy 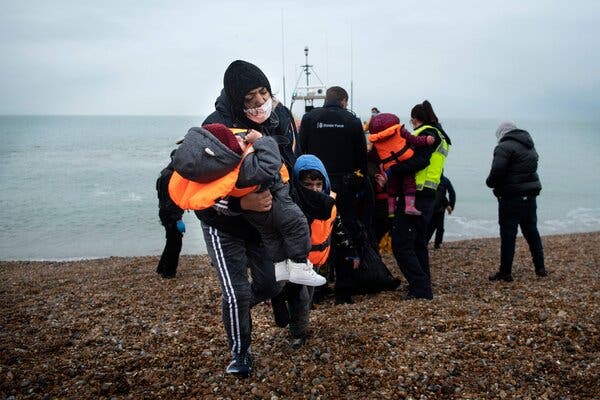 Migrants arriving at a beach last month in Dungeness, on the southeast coast of England, after being rescued while crossing the English Channel.
Credit...Ben Stansall/Agence France-Presse — Getty Images

From NYTimes by Jane Arraf, Sangar Khaleel and Megan Specia
Migrants who were on a separate boat described the horrible aftermath of the sinking in the English Channel that took at least 27 lives.
The boat packed with migrants was about halfway across the English Channel when one of the passengers spotted two orange life jackets bobbing in the water.
The seas were rough, and it was only when they got closer that Zana Hamawandani saw the vests contained dead bodies.

Soon, other bodies started appearing.
As Mr. Hamawandani watched, the current pushed one of them under his inflatable boat, where it collided with the whirling blades of the outboard motor.
“It came up again but I saw it floating for just a few seconds before the waves took it away,” he said.
He remembered it was the body of a man wearing baggy pants.

Another migrant, Karzan Mangury, said he was so horrified by the corpses that he tried to look away. “Our boat was surrounded by dead bodies,” said Mr. Mangury.
“At that moment my entire body was shaking.”

Their accounts, in phone interviews from an immigration facility in England, are the first time they have spoken to news media and are among the only witness descriptions of the last minutes of the disaster.
At least 27 people are believed to have died, the biggest single loss of life in the channel since the International Organization for Migration began collecting data in 2014.

Along with the accounts of relatives of some of the victims, their descriptions also tell a story of hours of frantic and futile calls for help to French and English authorities as the migrant boat was sinking.
At one point, Mr. Mangury said, he made 10 calls to a number the French police had given him to try to report his location, and no one answered.

His description of his phone calls is the first public account by a migrant who spoke directly with English and French police to report the sinking.

A few minutes after seeing the corpses, Mr. Hamawandani and Mr. Mangury said, they saw a mostly submerged, deflated boat with at least two people clinging to it — believed to be the only survivors of a migrant boat that sank in the channel on Nov 24.
“They were shouting, we could hear them yelling for help,” said Mr. Hamawandani, a 21-year-old Iraqi Kurd.
Eventually the British Coast Guard rescued Mr. Hamawandani’s vessel and a French fishing boat picked up the two survivors of the sunken boat. 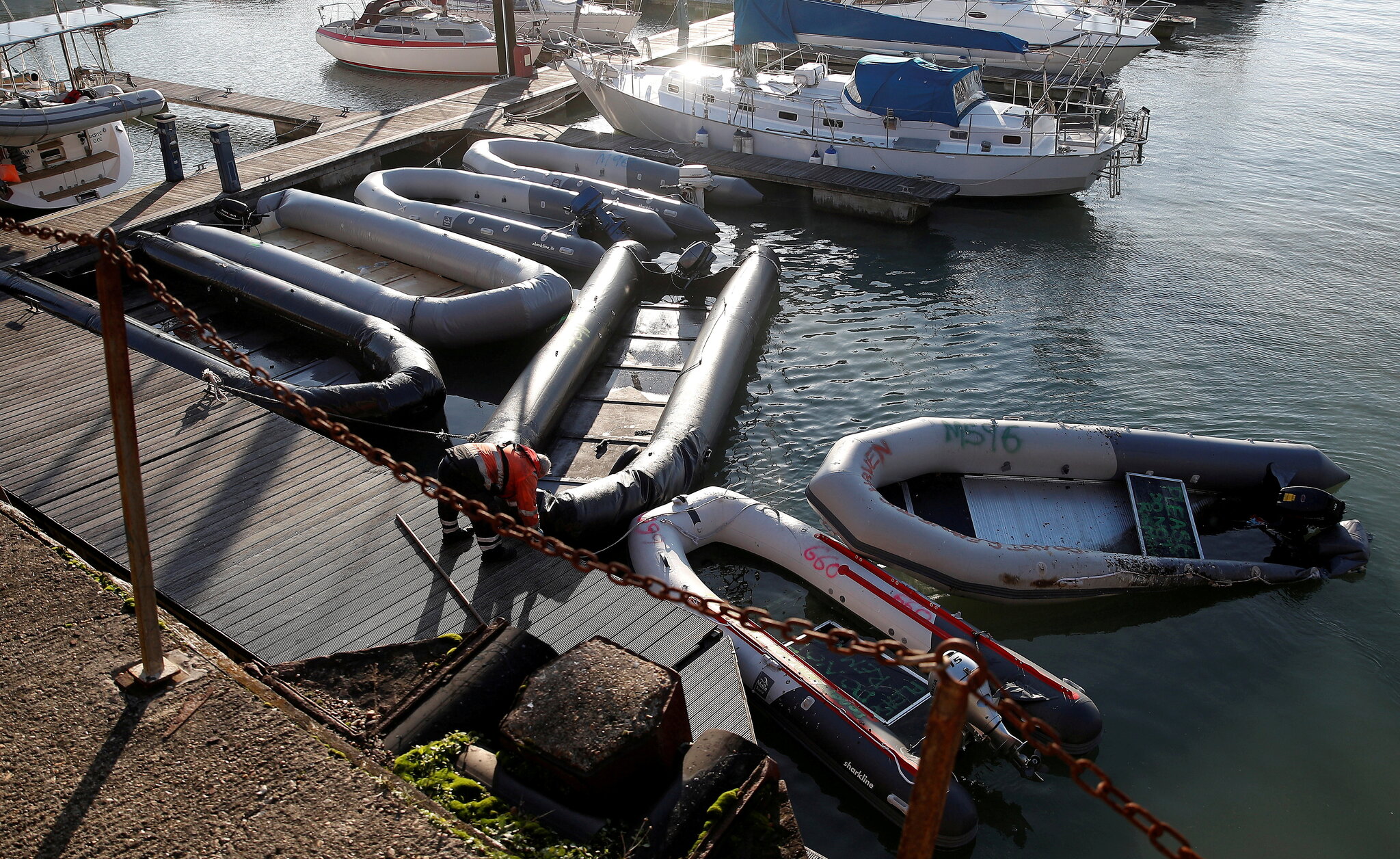 ImageInflatable boats used by migrants who crossed the English Channel from France being secured by an official in Dover last month.
Credit...Peter Nicholls/Reuters
In reporting from cities and towns in the Iraqi Kurdistan region where many of the victims came from, my colleagues and I first heard about Mr. Hamawandani from his family, who feared he had been one of the victims after he told them he was in a boat crossing the channel and then dropped out of touch.

Mr. Hamawandani eventually put us through to Mr. Mangury, who spoke to us on the same phone. A location app indicated they were at a facility that local immigration activists confirmed is used to house migrants in Crawley, a town in southern England.

The disaster has injected a new sense of urgency into efforts by European countries to better control high-risk channel crossings. Activists also believe the deaths, which included children, highlight a contentious, ineffective partnership between Britain and France that has failed to improve the protocols for rescuing migrants in distress.

Mr. Hamawandani and Mr. Mangury set off with 23 other people in the early morning hours of Nov. 24. After more than 10 hours in the water, the engine on their own boat was failing and they were running out of fuel when they spotted the bodies.

Mr. Mangury said their boat was in French waters when they saw the two people clinging to the deflated boat. He started calling 112, the French distress number. “I told them there is a boat broken and people dead. Please help them and help us,” he said.

He said the French police asked him to send his location, but he could not send to a three-digit number. They gave him another number to try, but he said it went unanswered 10 times. Eventually he was able to get a number to send a location via WhatsApp.

He said that after an hour the French Coast Guard had not arrived. At about 12:30 p.m. he reached the English police, who told him they had alerted the French.

About 40 minutes later, after their own boat engine had stalled, Mr. Mangury said they saw a helicopter circling and British Coast Guard boats heading toward the bodies. 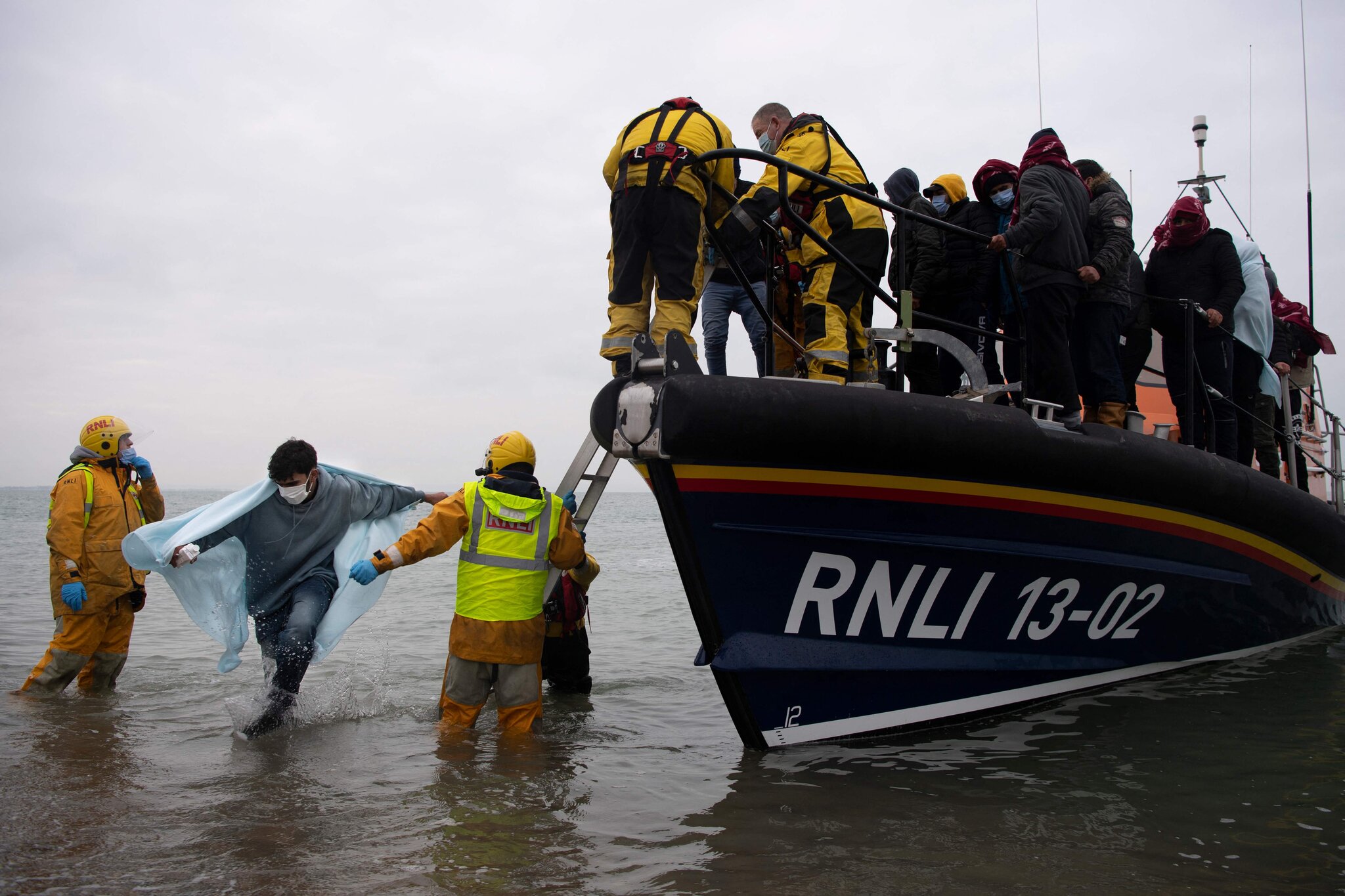 ImageMigrants rescued by the Royal National Lifeboat Institution, a volunteer rescue organization, being brought to Dungeness last month.
Credit...Ben Stansall/Agence France-Presse — Getty Images
His account raises new questions about the response of the French and British rescue teams.
Many of the victims’ relatives accuse the two countries of deflecting responsibility by saying the boat was in each other’s waters and failing to respond to distress calls.

The British Coast Guard said in a statement that in the early hours of Nov. 24, in response to distress calls, it launched a search and rescue operation that included a border patrol boat and a helicopter. It did not specify which distress calls it received.

“Three small boats were located and those onboard rescued,” a spokesperson said. “No other small boats or people in the water were identified in the search area.”

In France, both judicial and local authorities in the north declined to comment about whether they had received calls from the migrant boat or from Mr. Mangury, saying they could not discuss a case while it was under investigation. A spokeswoman for the maritime authorities in northern France said they had only been alerted to the ill-fated migrant boat by fishermen who found it adrift in the channel.

The only two known survivors of the sinking were an Iranian Kurd and a Somali, presumed to be the migrants seen by Mr. Mangury’s boat.

They told the Iraqi Kurdish television network Rudaw that their inflatable boat had sprung a leak and started to deflate while taking on water.

The Somali migrant, identified by Rudaw as Mohammed Isa Omar, said they were frantically calling both the French and British police as the flimsy boat started to sink.

“Most of the calls were to Britain saying ‘Help. Help us.’ They said ‘Send us the location’; we didn’t have the chance,” he told the network.
He said at that point the leaking boat capsized, throwing everyone in it into the water along with their phones.

The other known survivor, an Iranian Kurd living in Iraq identified by Rudaw as Mohammad Shekha Ahmad, described fellow migrants holding hands in the frigid water and said that one by one they lost the strength to hold on and were carried away.

Mr. Hamawandani and Mr. Mangury said they were haunted by not being able to help the two surviving migrants holding onto the sunken boat.
“Some of us said ‘Let’s go and help them’ but most of them were afraid because they saw the dead bodies in the sea and they thought the same thing would happen to us,” said Mr. Hamawandani.

Many of the victims were Iraqis from the country’s Kurdistan region in northern Iraq, and the sinking has sent waves of grief and anger through Kurdish towns and villages.
More than two weeks after the sinking, none of the families have been officially notified of the fate of their relatives.

In the picturesque mountain town of Hajiawa, Nazdar Sharif swung between desperate hope that her son Twana Mamand was still alive, and resignation that he was among the victims.
Twana had tried six times over the last two months to cross the channel to Britain, where his sister has lived for years, said his brother, Zana Mamand.
Each time, he was caught by the French authorities and sent back.

On his seventh attempt, Twana set off with a relative. He sent his brother a live location showing them roughly in the middle of the channel, Zana Mamand said.

He told him by speaker phone that they would be in British waters in an hour. Mr. Mamand could hear the passengers on the other end of the line.
“Everybody was happy and laughing,” Zana Mamand said.
An hour later, when he was no longer able to reach his brother, he called their sister and brother-in-law in London.
The brother-in-law, who for privacy reasons asked to be identified only by his last name, Abdullah, said he spoke to the relative Twana was traveling with at about 1 a.m., and told him to call the police.
He said two hours later his relative told them other people on the boat had called the French and English police but had been told they were in each other’s waters.
That was the last time he was able to reach him.

At the Mamand family’s home near the town of Ranya, where hundreds of young men have left for Britain in the past few months, Twana’s mother emerged from a back room, distraught, wearing a string of blue plastic beads meant to ward off harm.
“I tell myself he is coming back,” said Ms. Sharif, 49, leaning against another of her sons for support. “I need an answer soon whether he is dead or alive. I want my son.”
Links :
Posted by geogarage at 1:07 AM