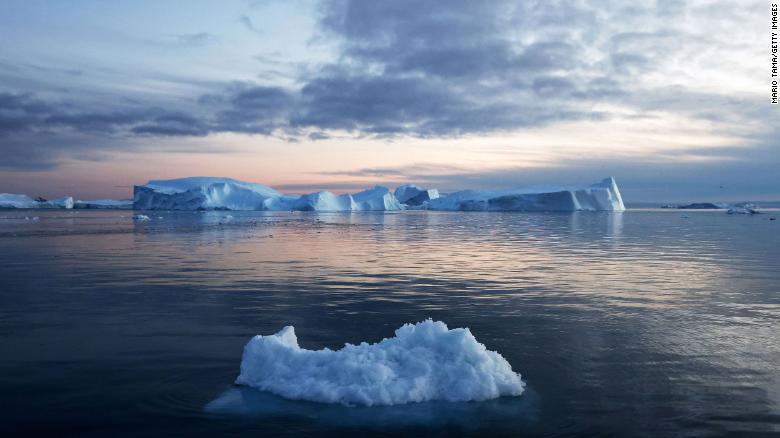 Icebergs from the Sermeq Kujalleq glacier float in the Ilulissat Icefjord on September 5, 2021 in Ilulissat, Greenland.
2021 will mark one of the biggest ice melt years for Greenland in recorded history.
From CNN by Rachel Ramirez
From extreme melt events to an influx of beaver colonies in Alaska, and rain falling at the summit of Greenland for the first time on record, the Arctic region showed clear symptoms of an ailing planet over the past year.
A report published on Tuesday, which serves as an annual physical for the Arctic, found this vast and significant biome is changing profoundly.
It continues to warm twice as fast as the rest of the Earth and is rapidly losing ice cover, transforming from a reliably-frozen landscape to a greener and browner one than it was just around a decade ago.

More than 100 scientists authored the Arctic Report Card, published by the National Oceanic and Atmospheric Administration (NOAA), and examined changes in snow cover, sea ice volume, tundra vegetation, as well as surface air and ocean temperatures from October 2020 to September 2021.
The report also describes an increase in commercial activities and ships that are venturing further into the Arctic on sea routes opened up by melting ice.
They bring more garbage and noise to the region, changing its soundscape and interfering with the ability of marine mammals to communicate. 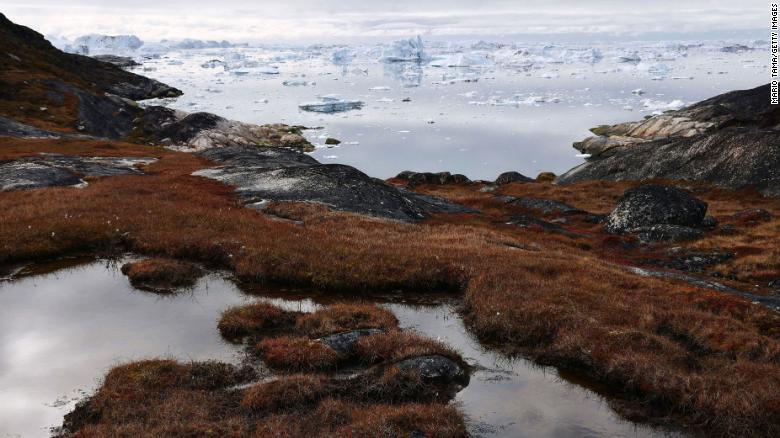 Researchers from Denmark estimated that in July of this year enough ice melted on the Greenland Ice Sheet to cover the entire state of Florida with two inches of water.
Retreating glaciers and melting permafrost also threaten lives, economies and infrastructure.

"If you recognize that the Arctic really is the gateway to climate change, and that we need some means of taking a regular pulse check on how things are in that critical area, the report card represents, if you will, a bit of a snapshot," NOAA Administrator Richard Spinrad told CNN.
"That's why it's important, just like going to your doctor for an annual physical," he added.
"You want to get a consistent, comparable set of observations." 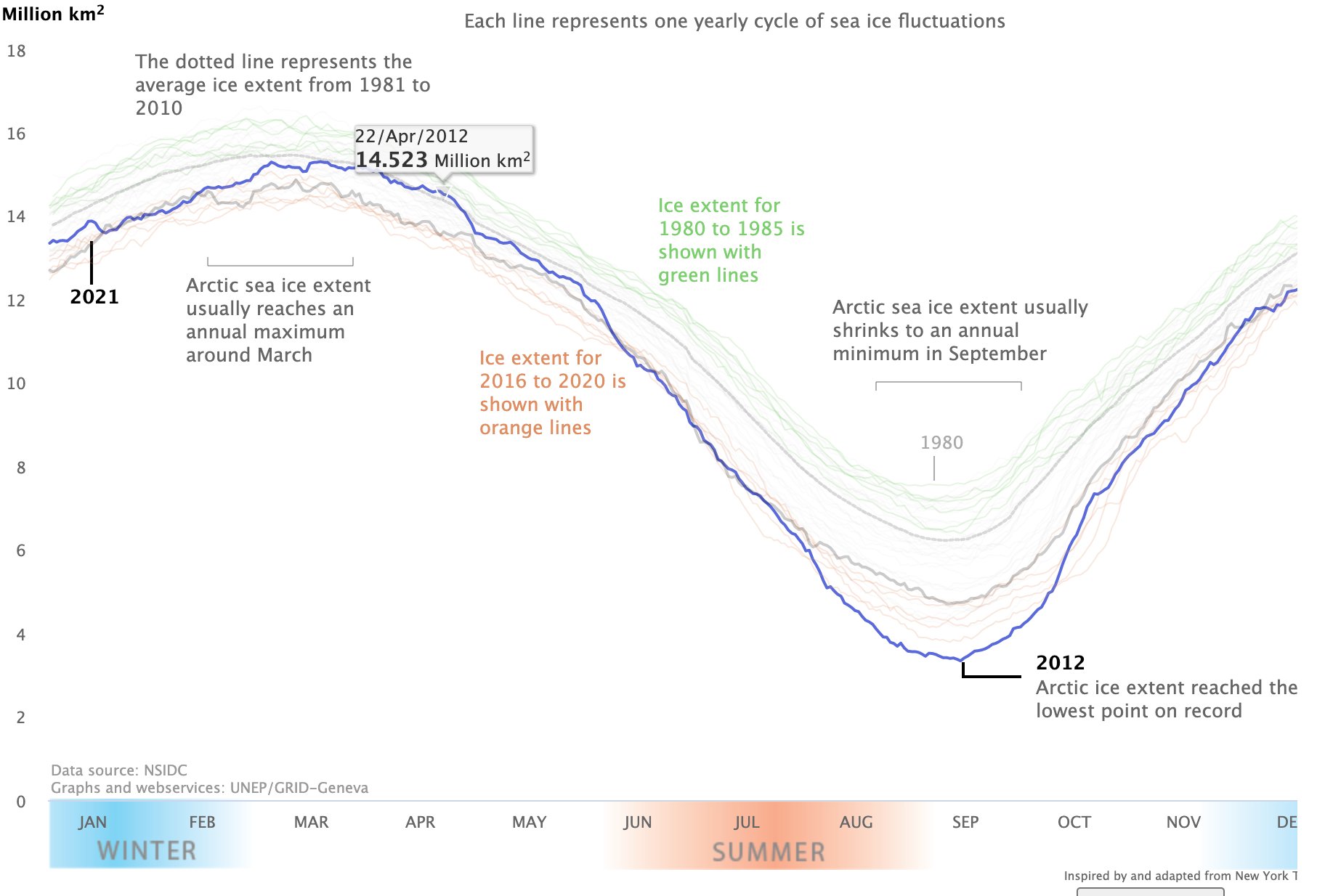 The Arctic is now amongst the fastest-warming regions on the planet, heating at more than twice the global average.
It's all connected

This summer, the Greenland ice sheet experienced three extreme melt events in the period studied, according to the report.
For people who live far from the Arctic and may think of the region as something in distance, Twila Moon, the lead editor of the report and scientist with the National Snow and Ice Data Center, explains that it's all connected, especially when it comes to ice melt.

As the Greenland ice sheet thaws, that loss of ice causes sea levels to rise, which can be strongly felt in places far from the Arctic, including low-lying Pacific Islands and coastal cities.
These impacts can lead to coastal erosion, salt water intrusion in freshwater drinking resources, as well as disruptions to sewer and water systems.

In addition, the Arctic's thawing permafrost is also releasing more greenhouse gases into the atmosphere, further exacerbating the warming of the entire planet.
"The Arctic report card this year is showing us how well connected we as people are to the environmental changes happening in the globe, and how these cascading disruptions in one place is not isolated and might influence other parts of the system," Moon told CNN.
"We now live at a time that is fundamentally different from the past and will be experiencing ongoing change into the future."
A recent scientific report on the region showed that the Arctic Ocean had been warming since the onset of the 20th century, decades earlier than previously thought.

While the year studied was the seventh warmest on record in the Arctic, the period from October to December 2020 was the warmest on record.
The Arctic continues to warm more than twice as fast as the rest of the globe.
The summer also brought warmer-than-usual temperatures.
An August heatwave triggered rain to fall at the summit of Greenland instead of snow for the first time on record. As temperatures at the summit rose above freezing for the third time in less than a decade, the warm air fueled an extreme rain event that dumped 7 billion tons of water on the ice sheet.

A report published after that event found this was likely to happen more often.
The Arctic is expected to experience more rain than snow some time between 2060 and 2070, marking a major transition in its precipitation patterns as the climate crisis jacks up temperatures in the region.
"Things that happen in the Arctic don't specifically stay in the Arctic," Michelle McCrystall, climate researcher at the University of Manitoba in Winnipeg, who is not involved with the report, previously told CNN.

The NOAA report card also found, from satellite images and other data, that North American beavers are taking over the Arctic tundra of Alaska, doubling their ponds in the last two decades.
Scientists are also mapping beaver ponds in Canada and Asia.

That's an issue because beavers gnaw through and fell trees, and build dams, which can flood valleys and form new lakes that contribute to the thawing of the frozen permafrost soil.
When permafrost melts, it emits large amounts of methane, a more potent greenhouse gas than carbon dioxide.

Both the dwindling sea ice and shifting marine habitats are also bringing an uptick in shipping traffic to the Arctic.
The rise in human activity, coupled with the environmental changes it brings, is drastically altering the marine soundscape, according to the report.

"In your home, if you notice that one of your lights is flickering, you'd wonder if you got a problem with the electricity," Spinrad told CNN.

"But if you notice all the lights are flickering, the air conditioning is not working, and there are some leaks in the plumbing, you'd start saying we have a serious problem overall with the home, not just an isolated set of incidents."
Spinrad said it's the aggregation of a wetter, less icy, greener and warmer Arctic that suggests the region is fundamentally different from the one the planet has known centuries, or even decades ago. 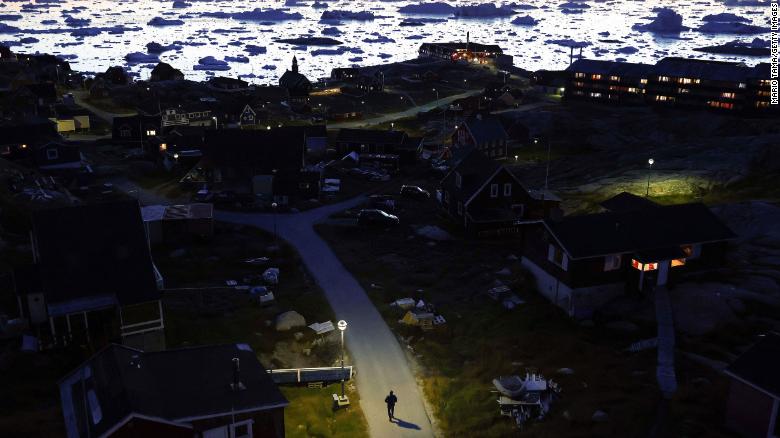 Ice and icebergs float in the distance in Disko Bay in September 2021 in Ilulissat, Greenland.

The report found that, as the planet rapidly warms, retreating glaciers and thawing permafrost are already threatening the lives of the roughly five million people living in the permafrost region of the Northern Hemisphere, creating a cascading effect through economies, infrastructure, and national security of local Arctic communities.

Glacial retreat is also exposing already arduous slopes that are prone to destabilize, which in the presence of deep water, can cause landslide-fueled tsunamis, flooding and debris flow that could potentially be deadly, the report shows.

This last year adds to another stretch of exceptionally high tundra greenness since the report began; however, recent extreme events and other local influences such melting permafrost thaw or wildfires are also priming the landscape to become browner.
Moon said that as the whole world is experiencing some level of impact from the climate crisis, people should be able to empathize with communities in the Arctic and not view the region as a disconnected place.
"The people of the Arctic are similarly experiencing extreme events and conditions that they've never before witnessed or have to deal with," said Moon.
"So on a very human scale, we are all finding ourselves in a world that is now fundamentally changed from the the environmental conditions of the last many decades and centuries."