From The Manila Times by Saul Hofileña Jr. Under the normal baseline method, the low-water mark, the land that is visible during low-tide or where the sea water meets the temporary shoreline created during the low tide, is the starting point for the baseline.
In this matter, the Philippines is one of the very few States that was allowed to establish straight lines around its archipelago (if you want to have a rough idea on how the baselines of the Philippines theoretically look like, just draw straight lines on a map with the lines enclosing our archipelago).

Having established its points of beginning which are a series of straight lines, the Philippines could now reckon its maritime zones.
The first is the territorial sea which must not exceed 12 nautical miles from the baselines (one nautical mile is approximately 1,852 meters. You do the math). 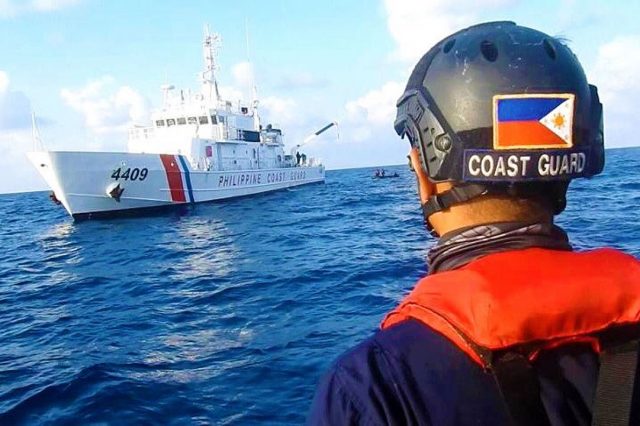 Philippines Coast Guard
The Philippines exercises sovereignty in its territorial sea as it does over its internal waters.
Not more than 24 nautical miles from the baselines is the contiguous zone.
In the contiguous zone the Philippines is not sovereign, but it could enforce its customs, fiscal, immigration and sanitary laws within the area.
Not more than 200 nautical miles from the baseline is the exclusive economic zone (EEZ).
This is the most contested area in the Law of the Sea, because within this zone, the Philippines has "sovereign rights."
Sovereign rights refer to the right of exploring and exploiting, conserving and managing the natural resources, living or non-living, of the waters within the EEZ.
It also has the right of economic exploitation and exploration, such as the production of energy from water, water current or wind.
The Philippines also has the right to establish and use artificial islands, and structures, conduct marine scientific research and the correlative duty of protecting and preserving the environment within its EEZ.

Philippines in the GeoGarage platform (UKHO nautical raster chart)
Beyond the EEZ is the High Seas.
The High Seas is open to all States and all States have the right to, among others, conduct scientific explorations, fish, lay submarine cables, and fly its aircraft within the territory.

According to Unclos III, the Philippines exercises sovereign rights to the exploration and exploitation of the natural resources within its continental shelf and extended continental shelf.

We now go to the zone mysteriously called "The Area."
The Area encompasses the deep seabed and subsoil beyond the national jurisdiction of any State, i.e., beyond the 200 nautical miles limit.
The Area is the common heritage of mankind and nations that wish to exploit the resources underneath The Area must ask the permission of the International Seabed Authority (ISA).
As of this writing, more than 30 companies have received permission from the ISA to mine the undersea resources of The Area.
The BRP Sierra Madre lies on top of the Ayungin Shoal (a shoal is a sandbar which makes the water shallow).
Ayungin is also called the Second Thomas Shoal and is situated approximately 105 nautical miles from Palawan and therefore, within the Philippine exclusive economic zone and the country's continental shelf.
Being part of our EEZ and continental shelf, according to Unclos III which Chinaand the Philippines signed on the same day, i.e., Dec. 10, 1982, our entitlements under the treaty must be respected.
One would wonder, after the Philippines was deprived of its entitlements under Unclos III due to the illegal and unauthorized actions of China, if indeed, the Law of the Sea Convention benefited us at all.
Links :
Posted by geogarage at 1:13 AM