Yale says its Vinland Map, once called a medieval treasure, is fake 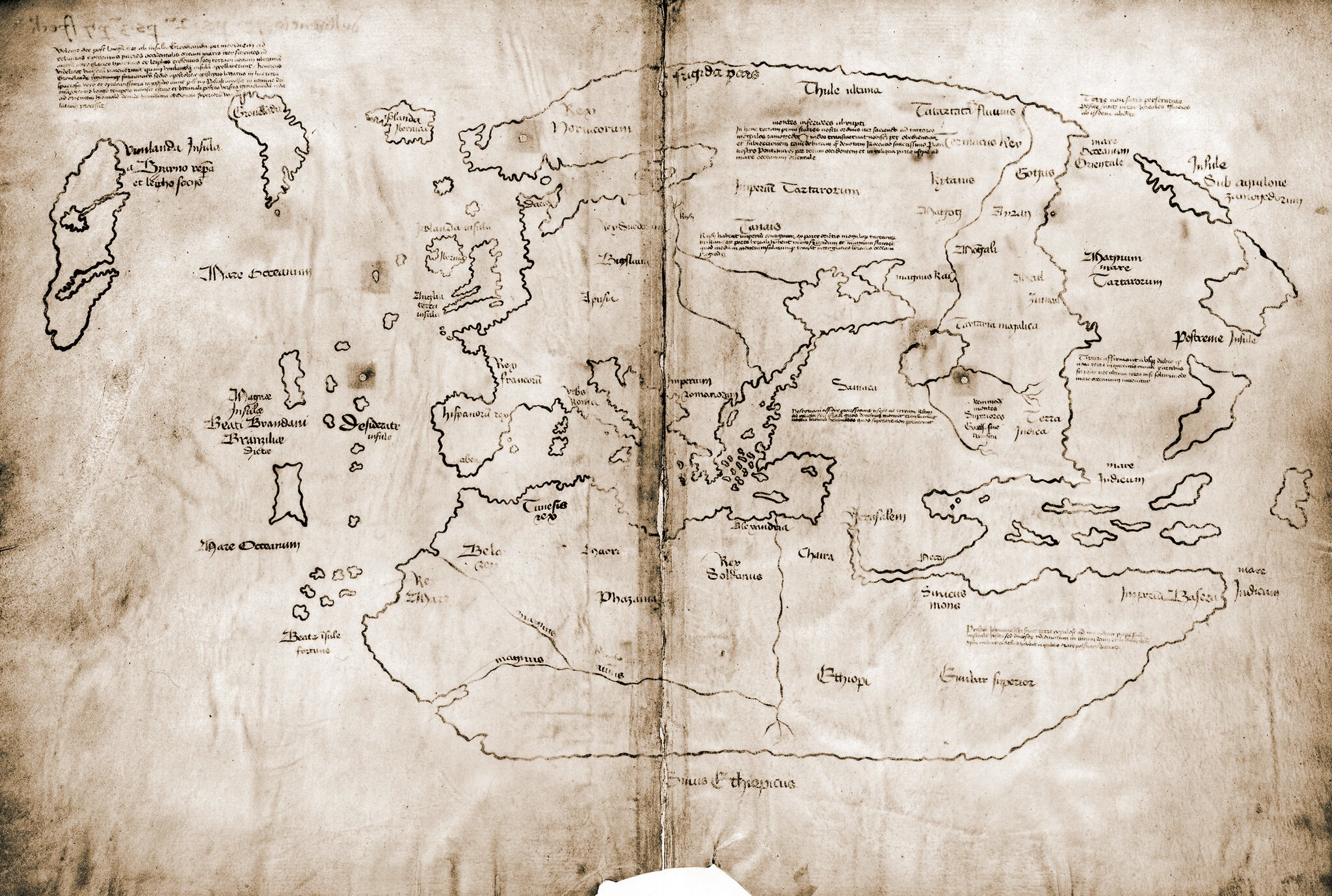 The Vinland Map was unveiled in 1965 by a Yale team that believed it was made in 1440.
A new team found a titanium compound used in inks first produced in the 1920s.
Credit...VCG Wilson/Corbis via Getty Images
From NYTimes by y Alan Yuhas
For decades, researchers at Yale and elsewhere have questioned the authenticity of a map that seemed to reflect Viking travels to North America.
The school now says the case is closed.
Doubts crept in around Greenland, which looked so good it was frankly suspicious, and questions soon spread all over the map: about the wormholes, the handwriting and, most important, the weirdly crumbling ink.
For over half a century, scholars have fought over the authenticity of the Vinland Map, which Yale University unveiled to the world in 1965; at the time, calling it evidence of Viking explorations in the western Atlantic, the first European depiction of North America and a precious medieval treasure.
Yale now says someone duped a lot of people.
“The Vinland Map is a fake,” Raymond Clemens, the curator of early books and manuscripts at the Beinecke Rare Book and Manuscript Library at Yale, said in a statement this month.
“There is no reasonable doubt here. This new analysis should put the matter to rest.”

The university said that a team of conservators and scientists, analyzing the elements in the map’s lines and text, found high levels of a titanium compound used in inks that were first produced in the 1920s. Mr. Clemens said the team hoped to publish an article in a scientific journal.
Ars Technica, Smithsonian Magazine and Gizmodo, among other news outlets, reported the conclusion this month. Elizabeth Ashman Rowe, an associate professor of Scandinavian history at the University of Cambridge, said it was “deeply satisfying to have the strongest possible scientific confirmation of the historians’ longstanding arguments that the Vinland Map had to be a forgery.”

Experts in the field, she said, had long since determined that the map was a forgery along the lines of the Kensington Runestone, a carved stone on a Minnesota farm that scholars found to be a 19th-century hoax.
But the debate over the map persisted, with decades of competing claims.
“It went on and on, like a tennis match over 20 years or more,” said William Fitzhugh, the curator of North American archaeology at the Smithsonian National Museum of Natural History. He praised the Yale team’s work as thoughtful and well done, adding, “We need to put a lid on this can.” Macro X-ray fluorescence spectroscopy (XRF) revealed the presence of titanium throughout the Vinland Map’s lines and text.
Photo courtesy of Yale University, New Haven, Connecticut.
The researchers also found that a Latin inscription on the back of the map was overwritten with modern ink, which Mr. Clemens called “powerful evidence that this is a forgery, not an innocent creation by a third party that was co-opted by someone else.”

The map can be traced at least to 1957, after Laurence Witten, an antiquarian in New Haven, Conn., acquired it from an unknown source in Europe.
He sold the parchment to the philanthropist Paul Mellon, who donated it to Yale. Infrared light exposed altered text in the Tartar Relation, the authentic medieval manuscript that the map was bound with when it arrived at Yale. Analysis showed the altered text is composed of modern ink.
Photo courtesy of Yale University, New Haven, Connecticut. 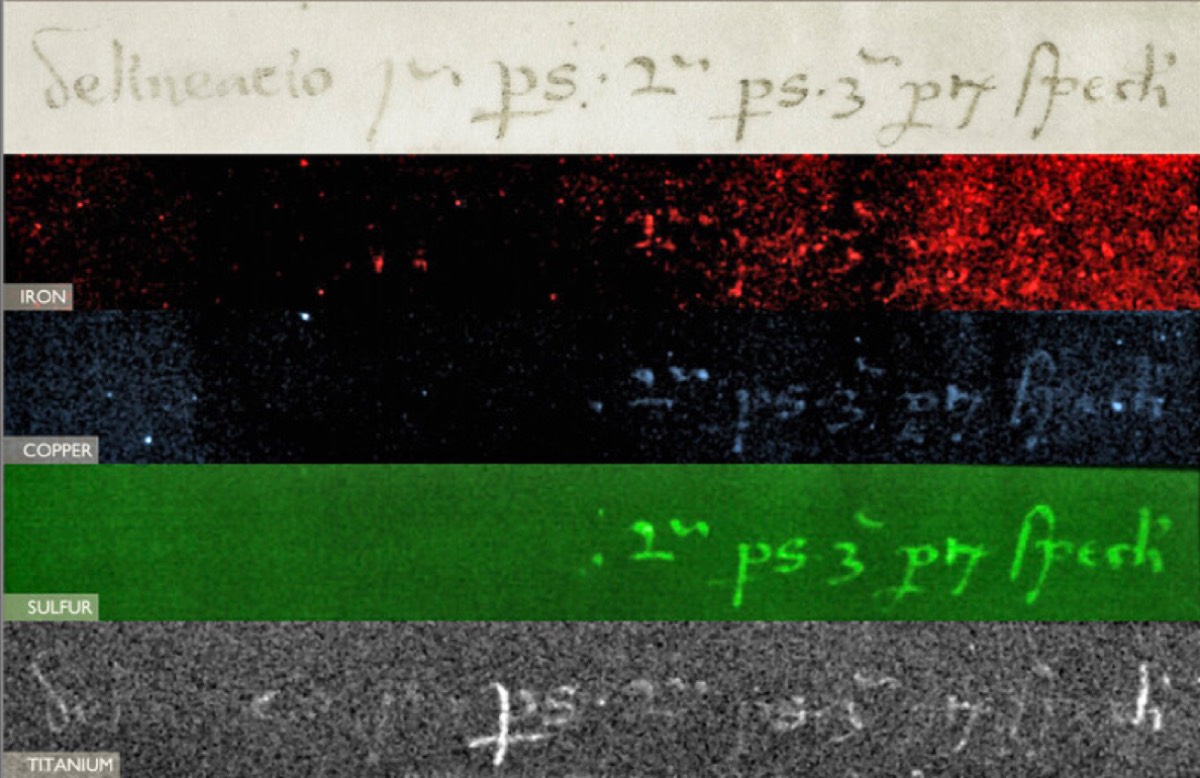 An inscription on the back of the map (top) was overwritten in an apparent attempt to deceive.
The bottom image shows the presence of titanium in the ink, which strongly suggests a modern origin.
In 1965, Yale revealed the map to the public, with stories appearing in major newspapers, including on the front page of The New York Times.
At the time, the school’s experts believed the map was compiled around 1440, about 50 years before Christopher Columbus sailed west.
Archaeologists and scholars have no doubt that a small number of Norse people reached the area of Newfoundland and the Gulf of St. Lawrence around A.D. 1000, with evidence both in 13th-century sagas about the journeys and the archaeological remains of a Viking settlement at a site called L’Anse aux Meadows, in Newfoundland.
There were probably fewer than 100 people on the largest of those voyages, and the travelers landed on shores where Native people lived in large numbers, said Gisli Sigurdsson, a professor of Norse studies at the Arni Magnusson Institute in Iceland.
“The stories, told and retold through generations, remember the general lay of the land: There are lands beyond Greenland, but they are really beyond our reach, too far away and too dangerous to visit,” Mr. Sigurdsson said. He added that the Vikings did, however, “continue bragging about how great and glorious an adventure it was.”
When the Vinland Map appeared in 1965, not long after the Newfoundland discovery caused a sensation, scholars quickly raised doubts about the parchment.
While the curator of maps at Yale’s library at the time saw the “amazingly accurate” drawing of Greenland as evidence of Viking exploration, others saw it as the mark of an artist looking at a 20th-century map.

Greenland’s northern coast was drawn “suspiciously similar to what you can see on modern maps,” Mr. Sigurdsson said.
“Greenland is so close to the real Greenland, it’s hard to believe anyone in the Middle Ages would have drawn a map like that.”

It also seemed unlikely for a medieval scribe to know that Greenland — drawn for centuries as a peninsula — was an island.
“Information about the geography of the western Atlantic would have taken the form of lore and advice passed on orally from sailor to sailor,” Dr. Rowe said.
“They did not use maps for navigation.”

Cartographers raised other questions.
They noticed that its ink was crumbling off “in a very strange way that medieval map ink doesn’t crumble,” Dr. Fitzhugh said.

Tests ensued, and debates over ink, handwriting and other elements of the map lasted decades.
Scholars also raised questions about whether holes in the map matched wormholes in an authentic medieval volume that was thought to be the source of the map’s calfskin parchment.

In 1974, Yale said research indicated it “may be a forgery.”
In 1987, scientists at the University of California argued that it could be genuine after all.
In the 2000s, various researchers published conflicting studies about it, even as defenders of the map dwindled.
“No one in the actual field of Norse studies or Vinland studies has believed in the authenticity of the map for a long time,” Mr. Sigurdsson said.
Like the Kensington Runestone, however, the map has fueled mythologies about the first Europeans in the Americas, said Dale Kedwards, a map historian at the Arni Magnusson Institute.
“The Vinland Map is just one in a long series of forgeries that are about demonstrating a medieval European presence on American soil,” he said.
“It’s used to undermine Indigenous First Nations history, and is tied with the kind of partisan, nationalist historiography that develops in Europe.”

Dr. Rowe said whoever forged the map may have been motivated by a “desire to enhance the international importance of Viking Age exploits at a time when Norway was one of the most impoverished countries in Europe.”
But she and other experts said the map’s exposure as a forgery was no loss to the field.
“The map is irrelevant to our understanding of Norse travels west of Greenland,” she said.

Yale now hopes to close the issue. “Objects like the Vinland Map soak up a lot of intellectual air space,” Mr. Clemens said in the university’s statement.
“We don’t want this to continue to be a controversy.”

Mr. Kedwards, the map historian, said that modern technology would easily catch such a forgery today, but that the map had deceived “some wonderful scholars” over the years.
“It’s part of the map’s history that’s quite sad,” he said.
“But whoever did it must have been a really skilled calligrapher — it’s not easy to do — with at least a glancing familiarity with medieval maps.”
Mr. Clemens said the map would remain in Yale’s collection, calling it a “historical object in and of itself” and “a great example of a forgery that had an international impact.”
Links :
Posted by geogarage at 1:00 AM