From BBCEarth by Zoe Cormier
A new old-fashioned solution to the plastic crisis.

There is no corner on Earth where we will not find plastic trash – no matter how remote. 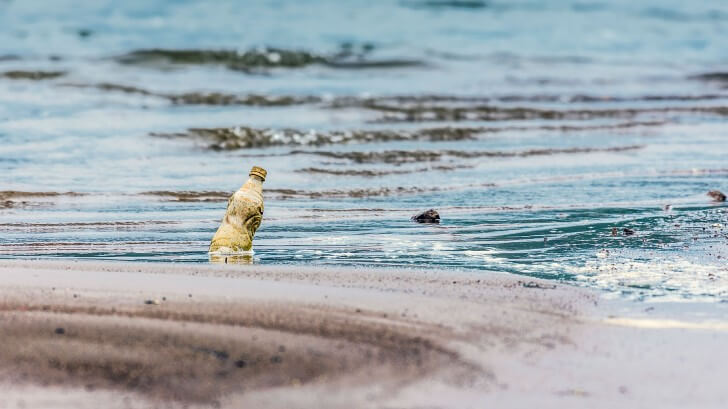 Because plastics were explicitly designed to stay intact forever, it doesn’t disappear, even when we can’t see it.
© Puneet Vikram Singh
On the slopes of the Himalayas, on the beaches of the uninhabited Henderson Island in the south Pacific, even Antarctica isn’t spared.
And nowhere is plastic more of a headache than the oceans.
While litter picking on land is fairly straightforward, once plastic gets into the deep ocean it is a nightmare to remove.
Plastic has even been found in the deepest point on Earth, the Mariana Trench, 11,000m below the surface.
An estimated 8 million metric tonnes of plastic waste enters the world’s oceans every year – where it stays forever.

More than just an eyesore and a worry, this trash can be deadly to wildlife across the globe: bags, bottle caps, pen shafts and more are routinely found in the stomachs of dead seabirds, turtles, fish and even whales.
In November 2018, a sperm whale washed up dead on the shores of Indonesia with bottles, bags, flip flops and even 115 cups in its stomach.

Because plastic was explicitly designed to stay intact forever, it doesn’t disappear, even when we can’t see it.
Plastic breaks down into smaller and smaller pieces, finally becoming “microplastics” that can be ingested by plankton and other tiny organisms which are then eaten by larger creatures sending those tiny plastic particles onwards and upwards through the foodchain – including humans.

As we are faced with the seemingly impossible task of cleaning up our plastic mess, there is one solution that shouldn’t be overlooked: the old fashioned plastic pick up.
A number of inventors and entrepreneurs are taking on the challenge at scale.
Cleaning harbours of plastic

The first place to start is the world’s harbours and bays – especially in urban areas, where most oceanic plastic pollution starts.
It’s estimated more than 90 per cent of the plastic in seas gets there through just 10 of the world’s major rivers.
In Japan, officials are starting to experiment with huge nets over sewer pipe outlets, which appears to be having some success – but there’s still all the trash in the world’s harbours to take care of.

A team in Australia have designed Seabin, a bucket that uses a solar powered pump to siphon water and trash by bobbing up and down with a cleverly designed lid which prevents fish and other sea life from falling in.
The bins have a ravenous appetite.
Based on field tests, each bin can gather 1.5 tonnes of waste a year.
After years of development, the first commercial Seabin became available for sale in May 2018 – now they’ve taken over 400 orders from 93 countries across the globe.

The problem won’t go away until we get on top of the source of the problem"
David Turton Facilitaor, Seabin project

“We’d love to be able to put ourselves out of business, but the problem won’t go away until we get on top of the source of the problem,” says David Turton of the Seabin Project.
“In the meantime we are just trying to do our best to stop trash from getting into the open ocean.”

The Seabins aren’t the only way to gather up near-shore plastic waste.
Turton is a fan of the WasteShark, autonomous drones modeled on whale sharks that can skitter around a city harbor swallowing up trash.
“There is no one answer that will solve this huge problem – the global cleanup will need many ideas and many inventions,” says Turton.

Baltimore’s Mr Trash Wheel, an enormous solar-powered paddle-wheel contraption, hauls trash into the mouth of a googly-eyed, cartoonish waste collector.
Its appetite for garbage is formidable: in a single day, Mr Trash Wheel has collected 38,000 lbs of rubbish.
With the help of marketing campaign (featuring plush toys made from recycled plastic trash gathered by the wheel), the city of Baltimore has been able to raise the funds to build a second wheel, Professor Trash Wheel.
Newport Beach in California, and Honolulu in Hawaii are both on board to build their own wheel.

Unfortunately, because the wheel collects every kind of waste imaginable, it’s nearly impossible to sort the plastic – so the trash is burnt in an industrial incinerator to generate energy.

Plastics in the Big Blue

It’s hard to know just how much plastic is in the open ocean, but scientists estimate we have now dumped more than five trillion pieces of plastic into the ocean.
Due to global oceanic currents, much of it has accumulated in five enormous rotating gyres and the largest is the infamous “Great Pacific Garbage Patch” in the North Pacific Gyre.

Plastic bags, washing tubs, bubble wrap, toys, trinkets, enormous “ghost fishing nets”, entire bathtubs – you name it, it’s there.
Mostly however the plastic debris has been shredded and battered into a Sargasso of unidentifiable shreds and junk which drifts slowly in circles over an enormous patch of 1.6 million km2.

Though we’ve known about the garbage patch since 1997, nobody has had the courage to fully propose or pursue any solution.
A few ideas – nets, trawls – have been tossed around, but the sheer scale of the problem has proved intimidating to anyone who dared to think about it.

In December, a non-profit from the Netherlands called the Ocean Cleanup – led by a determined 27-year-old inventor – launched what can only be described as one of the most ambitious environmental projects in human history.
The device consists of a 600m long floating tube, called a “floater”, about 1m in diameter, with a 3m “skirt” dangling below it into the sea.Once dragged out to sea, the long tube – arranged in a U-shape – is designed to passively gather plastic into the centre through the differential speed of the plastic trash compared to the much heavier floater.
Or as the team put it: “Create a coastline where there are none.”
Boats will periodically gather up trash from within the zone inside the floater.
“The main advantage is that there are no moving parts – in engine-powered boats, 99 per cent of the maintenance is devoted to the control room to upkeep complex machinery,” says Boyen Slat, inventor of the system and founder of Ocean Cleanup.
“We aren’t burdened by any of that – the goal is to make the system flexible enough to follow the waves.”

It's been a week since Jenny and the crew reached the Great Pacific Garbage Patch.
In this short period of time, the crew had already experienced some ups and downs.
This is a brief report from offshore on what's been happening so far.
Autonomous, energy neutral (solar panels provide power to wifi enabled GPS systems) and scalable, the current system - known as System 001, nicknamed “Wilson” – is the first prototype to be deployed to the Pacific, building on testing and prototyping conducted over five years of tests in the North Sea in Europe with 67 different designs, each building on the lastEventually they hope to deploy 60 systems, which they believe could remove 50 per cent of the trash in the Pacific every five years.
Unfortunately, The Ocean Cleanup has hit a snag since launch: in the first four weeks after deployment in November, System 001 wasn’t gathering as much plastic debris into the void of the U shape as well as expected – trash would drift in, but then drift out again.But even worse, a piece of the apparatus broke on December 29 2018.
Crew discovered that one of the tow heads, together with an 18m piece of floater pipe with two stabilizer frames was drifting away from the rest of System 001.
As of March 2019, the entire system is being docked in Hawaii for repairs and modification, and the team expect to bring it back to the garbage patch in a few months. 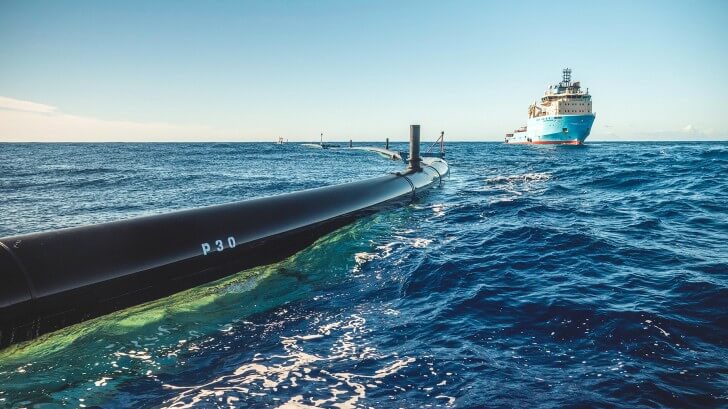 System 001 in operation in the Great Pacific Garbage Patch, November 2018.© The Ocean Clean Up
“To be clear, we realise that setbacks like this are inevitable when pioneering new technology at a rapid pace.
Because this is a beta system, we were expecting these sorts of things,” says Rachel Richardson, Communications Strategy Officer.
“The plane didn’t fly on its first attempt, and the space shuttle didn’t succeed on its first attempt.
This technology is designed for a really difficult place – like air or space travel, the ocean is huge and really far away.”

It is fair to compare gathering up all the plastic trash in the seas to landing a man on the moon – and in all likelihood, it’s going to be much harder, given the size and the scale of the problem.
“There is no reason not to try,” says Slat.
Links :
Posted by geogarage at 1:46 AM