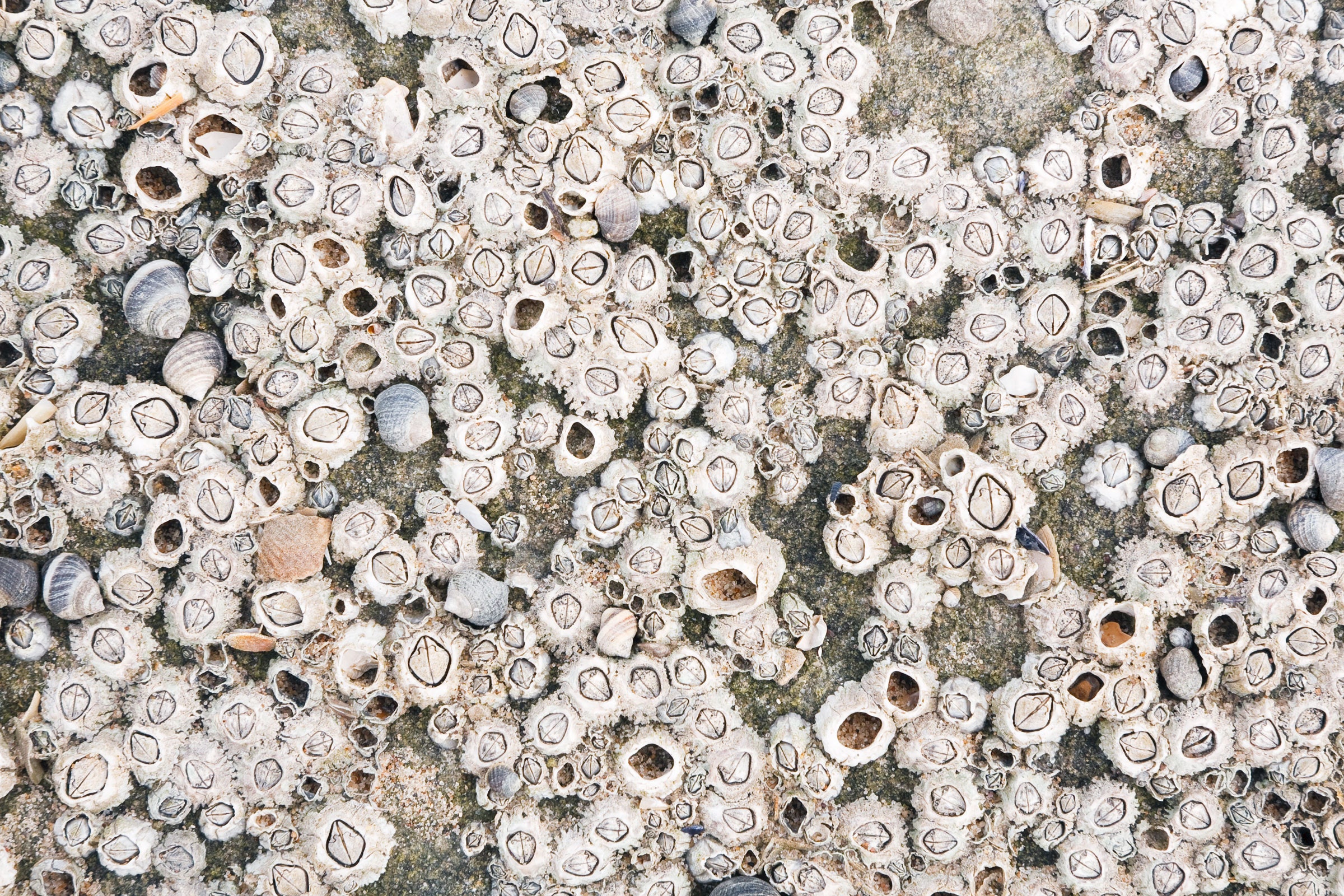 If you want to solve a problem, you can probably find an animal that’s already evolved to solve it.
Photograph: Paul Maguire/Getty Images
From Wired by  Max G. Levy
EXCESSIVE BLEEDING IS, in some sense, an engineering problem.

“For us, everything is a machine, even a human body,” says Hyunwoo Yuk, a research scientist in mechanical engineering at MIT.
“They are malfunctioning and breaking, and we have some mechanical way to solve it.”

About 1.9 million people die every year from blood loss, sometimes from trauma, sometimes on the operating table.
Bleeding bodies are wet, prone to infection, and need urgent care.
Yet it’s hard to create a seal on wet tissue, and most commercial products used to stop dangerous bleeding rely on coagulants which take minutes to work.
Some people don’t have minutes.

For the last seven years, Yuk’s team has been developing an entirely different approach to stopping bleeding: glue.
More specifically, glue inspired by barnacles.
Yuk says barnacles hold an evolutionary solution to the problem of sticking to surfaces that are resistant to getting stuck.
In a study published this month in Nature Biomedical Engineering, his team demonstrated how this arthropod-like glue can stop bleeding in seconds.

In the experiment, Yuk treated rats with bleeding heart and liver injuries with products typically used by surgeons.
No dice—the bleeding continued.
On others, he squeezed on the lab’s oily paste.
“Exactly the same injury could be sealed in just 10 seconds or so,” he says.

The rats survived thanks to the glue, and so did pigs that were tested by Yuk’s collaborators at the Mayo Clinic.
Their evidence, although still preliminary, bodes particularly well for human surgical patients with blood, heart, and liver disorders.
“My overall impression of this material is that it's incredible,” says Hanjay Wang, a resident in Stanford University’s Cardiothoracic Surgery Department who was not involved in the study.
“It definitely fills a need, especially in the emergency setting, when you need to just get control.”

THE TEAM OF engineers knew they might find inspiration in the animal world.
“The driving force for nature's evolution is survival,” Yuk says.
If you want to solve a problem, you can probably find an animal that’s already evolved to solve it.
Barnacles caught their attention, he says, because they are annoyingly sticky: “It's sticking on rock, sticking on rusted steel, it’s sticking on slimy surfaces like whales and turtles.”

Barnacles cling thanks to a cement of proteins secreted from glands along each animal’s “forehead.” But the secret sauce—well, more of an oil—is a cocktail of lipids that first sweep contaminants away from surfaces so the proteins can do their thing.
“So basically they are terraforming the target substrate,” Yuk says, priming it for a fast, strong seal.

And it turns out that you need a similar superpower when trying to seal up bleeding animal tissue.
In a way, says Yuk, blood is a “contaminated fluid” because it’s not a homogeneous liquid—it’s filled with blood cells.
For an adhesive to work, you’ve got to shove those cells out of the way.

Instead of using actual barnacle proteins for their test glue, Yuk’s team referred to it as a kind of chemical rubric for devising a high-pressure physical barrier.
In place of sticky protein particles, they repurposed a previous lab invention: biocompatible adhesive sheets made from a cocktail of organic molecules, water, and chitosan—a sugar found in hard shellfish exoskeletons.
(Barnacles use a similar compound called chitin, and chitosan is already used widely in wound dressings.)
Then they tossed the sheets into a cryogenic grinder that pulverized them until they turned into shards roughly one hundredth of a millimeter across.

As the blood-repelling agent, they used silicone oil, which is already used in medicine as an inert lubricant for surgical tools, and as a substitute for vitreous fluid after retinal detachments.
The microparticles and oil mixed to create a glue with the look and feel of a cloudy white toothpaste. 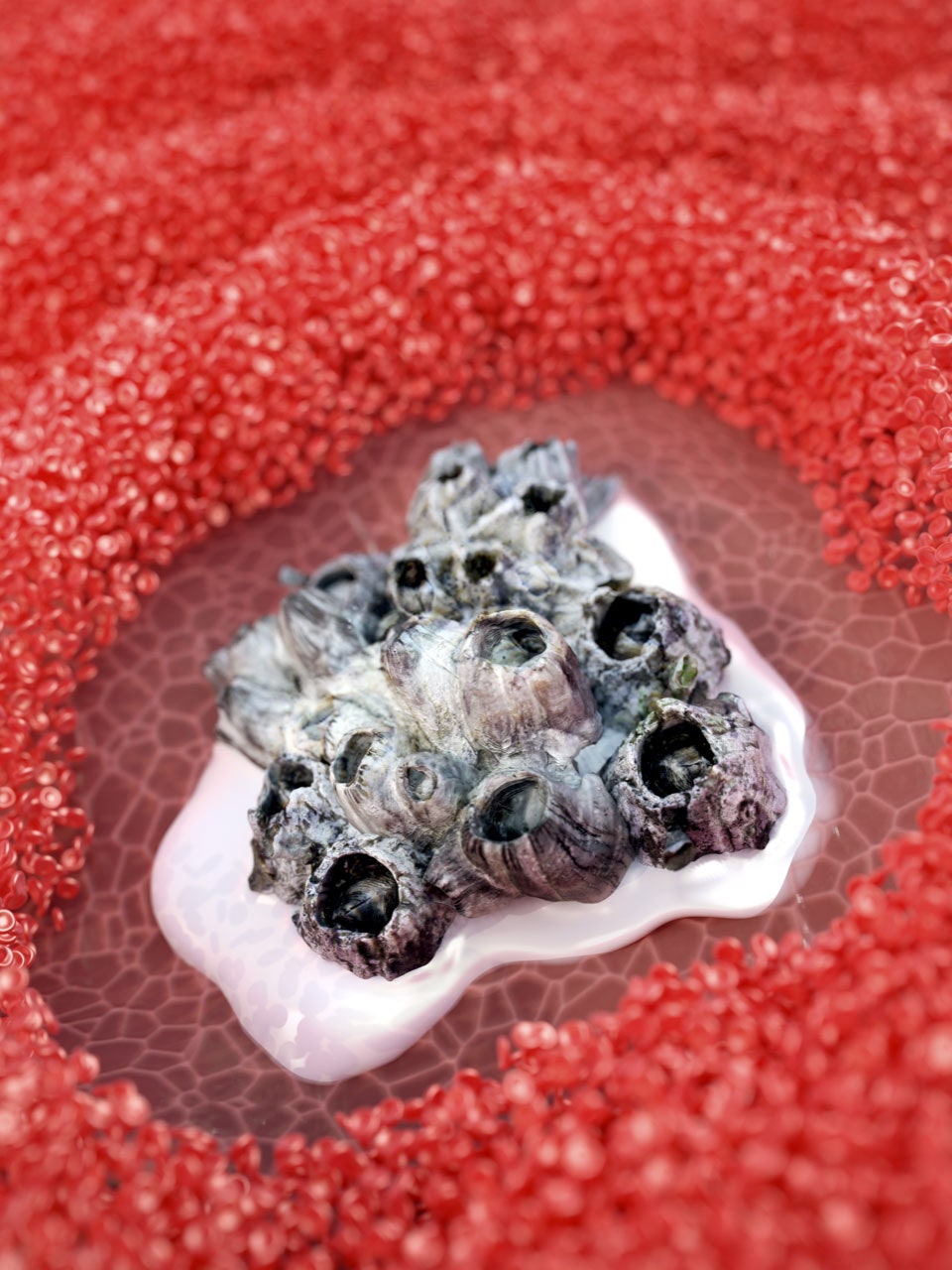 Barnacles use similar contaminant-repelling oils in order to stick to ships and whales.
Photograph: Hyunwoo Yuk
The paste passed through a gauntlet of mechanical tests to record how tightly—and quickly—it could seal issue samples.
Yuk squeezed the paste from a syringe onto a sliver of pig heart, then pressed a tiny metal spatula against it.
Under that pressure, the silicon oil cleared away debris and fluid.
At the same time, the mass of sticky microparticles congealed with the edges of proteins jutting from the tissue’s surface.
A strong bond formed within seconds.

Yuk then compared the barnacle glue to products used by surgeons, sealant pastes like Surgiflo and a coagulation patch called TachoSil.
In comparison, the barnacle glue formed a bond that was eight times tougher.
And when tested on an isolated pig aorta for its “burst pressure”—the limit before a seal ruptures—Yuk’s glue held firm at up to twice the expected pressure from blood flow.

Encouraged, the team was ready to test their invention on live animals.
Anesthetized rats bleeding from 2-millimeter knicks in their heart chamber muscles received either the barnacle glue or one of two commercial alternatives: Surgicel and CoSeal.
But only the glue overcame the pressure produced by the beating heart to form a seal—the bleeding stopped in seconds.
(You can see the video here, but be warned, it’s graphic.)
“It was very visually shocking,” Yuk says.

The team repeated similar tests on rats’ livers, an important region for bleeding studies, since it’s the body’s most vascularized organ.
Again, the glue stopped the bleeding in seconds.
And two weeks later, the holes in the hearts and livers remained sealed up tight.
“That rat could wake up and recover.
We could cuddle her while we were in the husbandry room,” Yuk says. 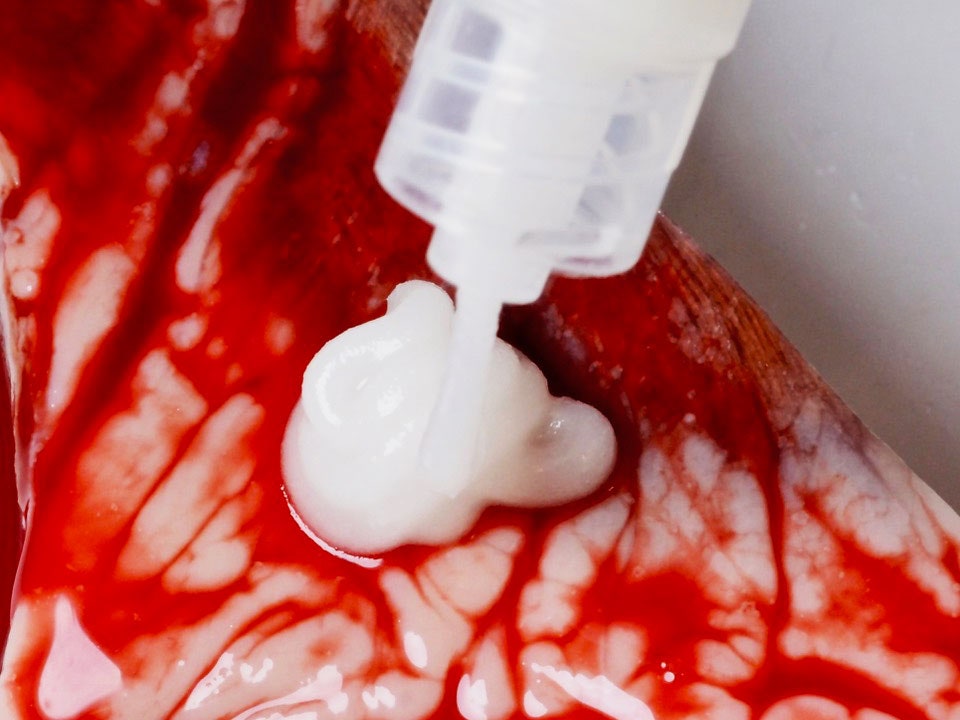 The barnacle-inspired glue is made from a mixture of sticky microparticles and silicone oil, which repels blood away from tissue.
Photograph: Hyunwoo Yuk
Then came the pigs.
Yuk looped in a team at the Mayo Clinic that was better equipped to operate on large animals.
The team wanted to avoid relying on the blood’s natural coagulation ability, since many people undergoing surgery have clotting issues themselves.
So, before any experiments, the three test pigs received heparin, a blood thinner.
The researchers cut three holes, 1 centimeter wide and 1 centimeter deep, in each of the animals’ livers, then treated the nine injuries with either the paste or a TachoSil patch.

Tiffany Sarrafian, one of the team’s veterinary surgeons, says she’s never seen anything work like this glue.
“We just put the paste on, and we're counting” for a few seconds, Sarrafian says, recalling the procedure.
“You take your hand off and you're like, ‘Hang on, there's no blood!’ It was pretty amazing.”

Sarrafian had planned that if the comparison commercial patch didn’t work after three minutes, she would reverse the anticoagulant in order to keep the pigs alive, and then allow them to clot and heal naturally.
But she added another step to stop the bleeding faster: plopping on a pea-sized squeeze of the experimental glue.
“It kind of is miraculous, in a way,” she says.

To be fair, coagulant patches like TachoSil aren't designed to stop heavy streams of blood from tissue with unclottable injuries.
But, in medicine, that’s an unmet need, says Christoph Nabzdyk, a cardiac anesthesiologist and critical care physician on the Mayo team.
“With aging populations, you have more and more patients that have either acquired bleeding disorders or are ultimately on blood thinners,” he says.
“The problem of bleeding, and bleeding control is substantial.”

He and Saraffian add that having an inexpensive glue that stops major bleeding andgoes on already-wet surfaces would be potentially lifesaving for patients, and it would be particularly useful in places without a lot of surgical resources, like in wilderness areas, combat zones, or less developed countries.

“Nothing in the material there is totally new, but this concept is really cool and unconventional,” says Shrike Zhang, a biomedical engineer who leads a lab at Harvard Medical School.
While materials like silicone oil and the adhesive ingredients are commonplace, their combination makes for something exciting.
”It's pretty early, but the animal data are pretty strong,” he continues.

But, says Wang, the Stanford cardiothoracic surgery resident, there are still elements that need to be optimized before the adhesive could be used in humans.
A glob of glue that seals damaged tissue in an emergency, or sticks to surrounding healthy tissue, could complicate any surgeries that follow.
“The question is, will you be able to operate in that area?” he asks.

Yuk’s team devised a solution to reverse this type of adhesive seal, and preliminary results in rats are promising.

They also want to know how long that seal lasts; ideally, it should not dissolve until after the tissue has healed on its own, but it also shouldn’t last forever.
The new study shows that the paste dissolves noticeably within 12 weeks, based on microscope images in a separate experiment using rats.
Depending on the injury and healing response, that may be plenty.

Another challenge is that other types of sealants are known to kill tissue over time.
Wang—and Yuk—note that a long-term study will be essential.
So far, their longest observation on bleeding organs is about one month after the glue’s application, using the pigs from the Mayo Clinic test.

And while it may still be many years before a sealant paste replaces the trusty suture, both surgeons and mechanical engineers would welcome the ability to glue patients back together quickly, to make bodies once again run like well-oiled machines.
Posted by geogarage at 1:21 AM