Which way will paper maps go in the future? Cartographer says they'll still be crucial, even with GPS Cartographer Anthony Stephens says maps do much more than provide a route for travel.
(ABC News: Lincoln Rothall)
From ABC by Bec Whetham

As a test, Anthony Stephens likes to ask "anybody under 30 years old who lives in the city" to name the suburb directly to the north of where they live.
"It is interesting the answers you get," Mr Stephens said.
"Sometimes we even get the question, 'What is north?'"

Our modern dependency on GPS has certainly challenged the cartographer, who has made and sold paper maps for more than 50 years.
His business, The Map Shop, used to produce Adelaide's street directories.
"We stopped printing those four years ago. You will never see a new Fuller's street directory again," Mr Stephens said. Anthony Stephens has a map for pretty much anywhere.
(ABC News: Lincoln Rothall)
Prior to COVID, 40 per cent of his business was overseas maps.
He has sold 10 in the past nine months.

The message that his product is dying doesn't scare him.
He has heard it before.

First at a map conference in the 1970s, where it was predicted that there would be "no such thing as maps" by 1990.
"And then I attended another conference in San Diego in the 1990s and their message was there would be no maps by the year 2000," Mr Stephens said.
"Guess what? It's 2021 and there are still paper maps and we've got 14,500 different ones." Making maps for organisations is what keeps The Map Shop going, although its production has decreased.
(ABC News: Lincoln Rothall)
Fortunately the shop has been able to fill some of the gap in demand with an increase in local and domestic maps, alongside its longstanding clients looking for topographical maps for commercial, emergency, or farming purposes.
Why maps are important

More than providing a route to travel or indicating where to find the nearest service station, Mr Stephens says maps are an important factor in human empathy.
"What's the use of listening to the news of doom and gloom if you don't know where the doom and gloom is in relation to you?" Mr Stephens said.
"It's as simple as that."
He has genuine concerns for young people who don't use maps, or know how.
"Because they're so used to looking at the screen on their phone, they only see that portion of the world."

He says maps are also an important record of time.
"[With] everything going online, there is then not a snapshot in time.
We're going to become the forgotten generation."

One of the shop's most popular items is a 100-year-old map of Adelaide, which features things like the Sir Ross Smith landing area.
"Of course all those maps were done under 'plane tabling', which involved a man going on top of a hill … triangulating the major features, then going to another hill and checking the coordinates and then sketching between them."
A modern day cartographer

What Mr Stephens once made by hand is now done with computers.

"We used to be known as plastic scratchers because we would actually work over a light table on a material where you would actually scratch out the plastic to mark out the roads and contours and drainage," Mr Stephens said.
"It still takes the same time to make the maps but the updating is a lot easier for us."

It is online mapping that has allowed modern-day cartographer Alex Broers to develop his love of art, culture and fantasy into a profitable business.

He hand draws "bespoke" maps, recreating Australian destinations that resemble maps of The Lord of the Rings' Middle Earth.
"I was making these maps initially as a personal hobby and passion, it was never a business to begin with," he said. 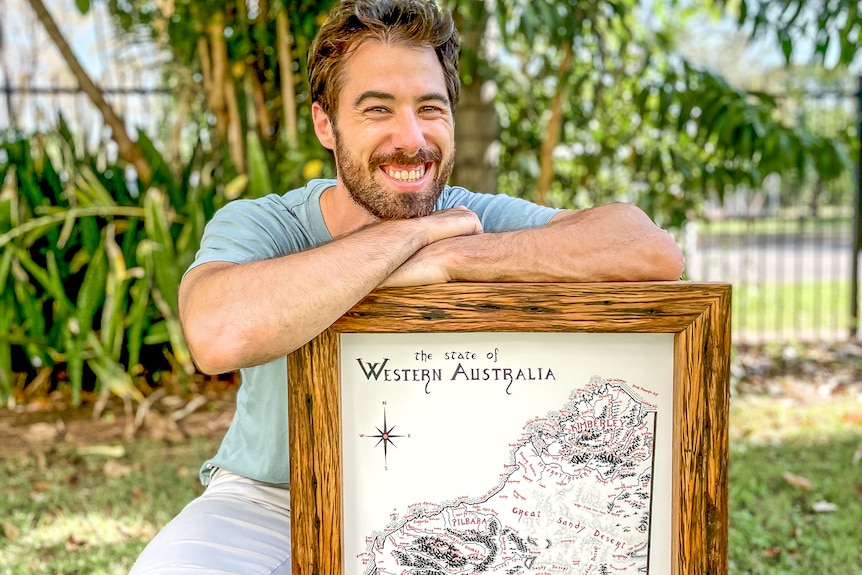 In the middle of COVID, Mr Broers started his business Cartography Chronicles in response to commercial interest online.

While it's always preferable to travel to the places he's recreating, the process can be done from his home in Darwin.
"I'm very lucky that we have the internet these days and a lot of the resources that I need to actually make the maps are also online."

It's still a long process though.
"For one of my state maps, it does take me 60-70 hours of drawing and that doesn't factor in the research phase." While Alex Broers's maps are geographically accurate, they're not recommended for navigational use.
(Supplied: Alex Broers)
While the geographical points are accurate, some features — the mountain ranges in particular — are enlarged.
"Obviously they're not in proportion to real life purely because if they were you'd have a little 'x' on a map or a few contour lines.
"With my work I really wanted to bring to the forefront the geography of each region."
Sentimental attachment

Mr Broers is continually taken aback by the interest in — and emotional attachment to — his work.
"I think it's a real testament that Australians in general are very attached and proud of where they come from," he says.
While Mr Broers's maps may not be made for navigation, they do evoke a personal reference for people. 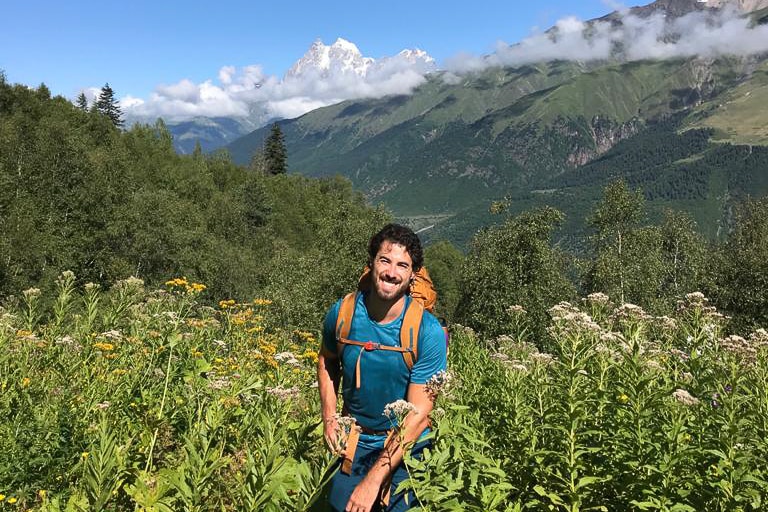 Alex Broers (pictured) and Anthony Stephens are travellers.
Mr Broers grew up in Bahrain and then lived in UK and Oman before moving to Australia.
(Supplied: Alex Broers)
"[They] almost connect the dots for people … [the map] triggers different memories depending on what area you look at."
The future of map making

While Mr Broers's personal style of map making may be keeping the art of cartography alive, Mr Stephens hopes traditional topographical maps will continue into the future.

It's a skill Mr Broers appreciates too.
"I don't know many people who are making cartography maps like the likes of Anthony," he said. Anthony Stephens has moved with the times when it comes to map making.
While GPS is an aid to a map, he says it's not a replacement.(ABC News: Lincoln Rothall)
"I do feel like it's a slowly dying art because of GPS, Google Maps and everything else [but] I still think there's a need for those handmade accurate maps."
Posted by geogarage at 11:34 AM