Allianz is raising the red flag over growing risks associated with larger vessels, ranging from navigational challenges at ports, fires, loss of containers at sea to unprecedented complex and expensive salvage processes in case of incidents.

The international shipping industry continued its long-term positive safety trend over the past year but has to master Covid challenges, apply the learnings from the Ever Given Suez Canal incident and prepare for cyber and climate change challenges ahead.
The number of large vessels lost remained at record low levels in 2020, while reported incidents declined year-on-year, according to marine insurer Allianz Global Corporate & Specialty SE’s (AGCS) Safety & Shipping Review 2021.

“The shipping sector has shown great resilience through the coronavirus pandemic, as evidenced by strong trade volumes and the recovery we are seeing in several parts of the industry today,” says Captain Rahul Khanna, Global Head of Marine Risk Consulting at AGCS.
“Total losses are at historic low levels for the third year running.
However, it is not all smooth sailing.
The ongoing crew crisis, the increasing number of issues posed by larger vessels, growing concerns around supply chain delays and disruptions, as well as complying with environmental targets, bring significant risk management challenges for ship owners and their crews.” 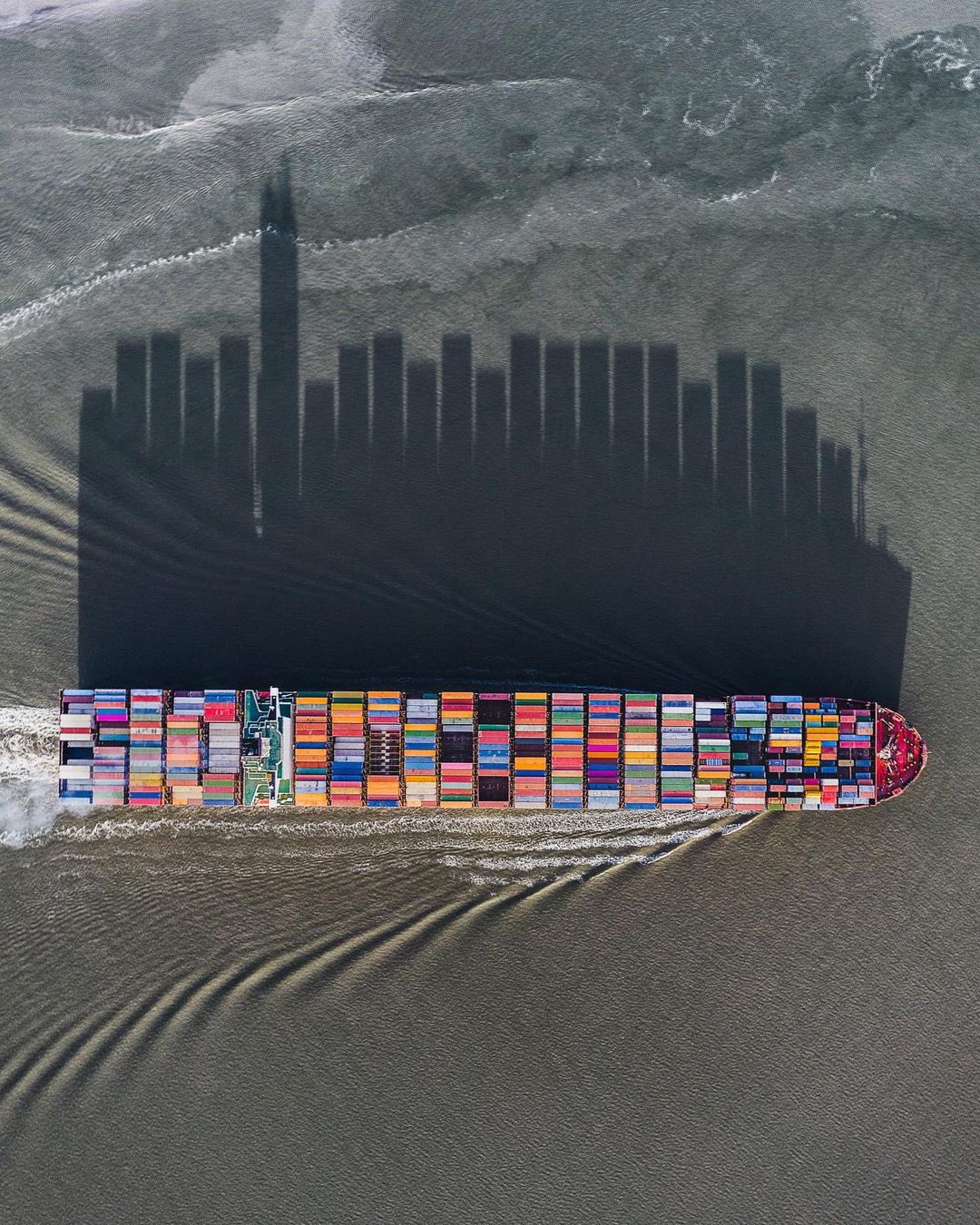 The shipping sector has shown great resilience through the coronavirus pandemic

The annual AGCS study analyzes reported shipping losses and casualties (incidents) over 100 gross tons.
During 2020, 49 total losses of vessels were reported globally, similar to a year earlier (48) and the second lowest total this century.
This represents a 50% decline over 10 years (98 in 2011).
The number of shipping incidents declined from 2,818 to 2,703 in 2020 (by 4%).
There have been more than 870 shipping losses over the past decade.

The South China, Indochina, Indonesia and Philippines maritime region remains the global loss hotspot, accounting for one in every three losses in 2020 (16) with incidents up year-on-year.
Cargo ships (18) account for more than a third of vessels lost in the past year and 40% of total losses over the past decade.
Foundered (sunk/submerged) was the main cause of total losses over the past year, accounting for one in two vessels.
Machinery damage/failure was the top cause of shipping incidents globally, accounting for 40%. 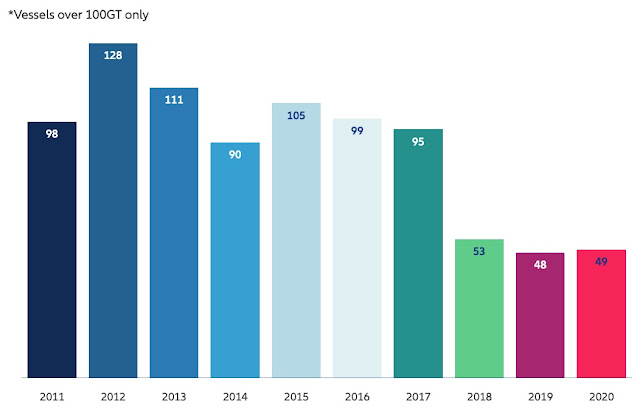 Despite the devastating economic impact of Covid-19, the effect on maritime trade has been less than first feared.
Global seaborne trade volumes are on course to surpass 2019 levels this year after declining slightly in 2020.
However, the recovery remains volatile.
Covid-19-related delays at ports and shipping capacity management problems have led to congestion at peak times and a shortage of empty containers.
In June 2021, it was estimated there was a record 300 freighters waiting to enter overcrowded ports.
The time container ships are spending waiting for port berths has more than doubled since 2019.

The crew change situation on vessels is a humanitarian crisis which continues to affect the health and wellbeing of seafarers.
In March 2021, it was estimated some 200,000 seafarers remained on board vessels unable to be repatriated due to Covid-19 restrictions.
Extended periods at sea can lead to mental fatigue and poor decision-making, which ultimately impact safety.
There have already been shipping incidents which have featured crews who have been on board for longer than they should have.
Seafarer training is suffering, while attracting new talent is problematic given working conditions.
Future crew shortages could impact the surge in demand for shipping as international trade rebounds.

Although Covid-19 has resulted in limited direct marine claims to date, the sector has not been spared significant loss activity.
“Overall, the frequency of marine claims has not reduced.
We are also seeing an increased cost of hull and machinery claims due to delays in the manufacture and delivery of spare parts, as well as a squeeze on available shipyard space,” says Justus Heinrich, Global Product Leader, Marine Hull, at AGCS.
“Costs associated with salvage and repairs have also increased.” In future, insurers could potentially see an uptick in machinery breakdown claims if Covid-19 has affected crews’ ability to carry out maintenance or follow manufacturers’ protocols.

Larger vessels, larger exposures
The blocking of the Suez Canal by the Ever Given container ship in March 2021 is the latest in a growing list of incidents involving large vessels or mega-ships.
Ships have become ever-larger as shipping companies seek economies of scale and fuel efficiency.
The largest container ships break the 20,000 teu mark, with vessels over 24,000 teu on order – capacity of container ships vessels alone has increased by 1,500% over 50 years and has more than doubled over the past 15 years.
“Larger vessels present unique risks.
Responding to incidents is more complex and expensive.
Approach channels to existing ports may have been dredged deeper and berths and wharfs extended to accommodate large vessels but the overall size of ports has remained the same.
As a result, a ‘miss’ can turn into a ‘hit’ more often for the ultra-large container vessels,” says Captain Nitin Chopra, Senior Marine Risk Consultant at AGCS.
If the Ever Given had not been freed, salvage would have required the lengthy process of unloading some 18,000 containers, requiring specialist cranes.
The wreck removal of the large car carrier, Golden Ray, which capsized in US waters in 2019 with more than 4,000 vehicles on it has taken over a year and a half and cost several hundreds of millions of dollars. The number of fires on board large vessels has increased significantly in recent years.
There was a record 40 cargo-related fires alone in 2019.
Across all vessel types, the number of fires/explosions resulting in total losses increased again in 2020, hitting a four-year high of 10.
Fires often start in containers, which can be the result of non-/mis-declaration of hazardous cargo, such as chemicals and batteries.
When mis-declared, these might be improperly packed and stowed on board, which can result in ignition and/or complicate detection and firefighting.
Major incidents have shown container fires can easily get out of control and result in the crew abandoning the vessel on safety grounds, thus increasing the size of loss.

Loss of containers at sea also spiked last year (over 3,000) and have continued at a high level in 2021, disrupting supply chains and posing a potential pollution and navigation risk.
The number lost is the worst in seven years.
Larger vessels, more extreme weather, a surge in freight rates and mis-declared cargo weights (leading to container stack collapse), as well as the surge in demand for consumer goods may all be contributing to this increase.
There are growing questions about how containers are secured on board ships.

Delay and supply chain issues
Maritime supply chain resilience is in the spotlight after a series of recent events.
The Ever Given incident sent shockwaves through global supply chains dependent on seaborne transport.
It compounded delays and disruption already caused by trade disputes, extreme weather, the pandemic and surges in demand for containerized goods and commodities.
“Such events expose the weak links in supply chains and have magnified them,” says Captain Andrew Kinsey, Senior Marine Risk Consultant at AGCS.
“Developing more robust and diversified supply chains will become increasingly important, as will understanding pinch points and supply chain nodes.”

The world’s piracy hotspot, the Gulf of Guinea, accounted for over 95% of crew numbers kidnapped worldwide in 2020.
Last year, 130 crew were kidnapped in 22 incidents in the region – the highest number ever – and the problem has continued.
Vessels are being targeted further away from the shore – over 200 nautical miles (nm) in some cases.
The Covid-19 pandemic could exacerbate piracy as it is tied to underlying social, political and economic problems, which could deteriorate further.
Former hotspots like Somalia could re-emerge.

The report also notes that all four of the world’s largest shipping companies have already been hit by cyber attacks, and with geopolitical conflict increasingly played out in cyber space, concerns are growing about a potential strike on critical maritime infrastructure, such as a major port or shipping route.
Increased awareness of – and regulation around – cyber risk is translating into an uptake of cyber insurance by shipping companies, although mostly for shore-based operations to date.

With momentum gathering behind international efforts to tackle climate change, the shipping industry is likely to come under increasing pressure to accelerate its efforts.
“A huge investment in research and development is required if the industry is to meet the challenging targets being set.
Today’s existing fleet and technology will not get the shipping industry to the International Maritime Organization’s target of a 50% cut in emissions by 2050, let alone the more ambitious targets being discussed by national governments,” says Khanna.

Last year, the cap on the sulphur content of ships’ fuel was cut.
Known as IMO 2020, the cut is expected to reduce emissions of harmful sulphur oxide (SOx) from shipping by 77%.
Insurers have seen a number of machinery damage claims related to scrubbers, which remove SOx from exhaust gases for vessels using heavy marine fuel.

Most frequent loss and incident locations
According to the report, the South China, Indochina, Indonesia and Philippines maritime region is also the major loss location of the past decade (224 vessels), driven by high levels of local and international trade, congested ports and busy shipping lanes, older fleets and extreme weather exposure.
Together, the South China, Indochina, Indonesia and Philippines, East Mediterranean and Black Sea, and Japan, Korea and North China maritime regions account for half of the 876 shipping losses of the past 10 years (437).The British Isles, North Sea, English Channel and Bay of Biscay region saw the highest number of reported incidents (579) in 2020, although this was down year-on-year.
And finally, the most accident-prone vessels of the last year were a Greek Island ferry and a RoRo ferry in Canadian waters, both involved in six different incidents.