The new Saildrone Surveyor is the world’s most advanced uncrewed surface vehicle, equipped with an array of acoustic instruments for high-resolution shallow and deep-water mapping.

Less than 20% of Earth’s oceans have been mapped using modern, high-resolution technology—we know more about the topography of the Moon and Mars than we do about our own planet.
And yet, knowing the shape of the seabed is critical to understanding ocean circulation patterns, which affect climate and weather prediction, tides, wave action and tsunami wave propagation, sediment transport, underwater geo-hazards, and resource exploration. 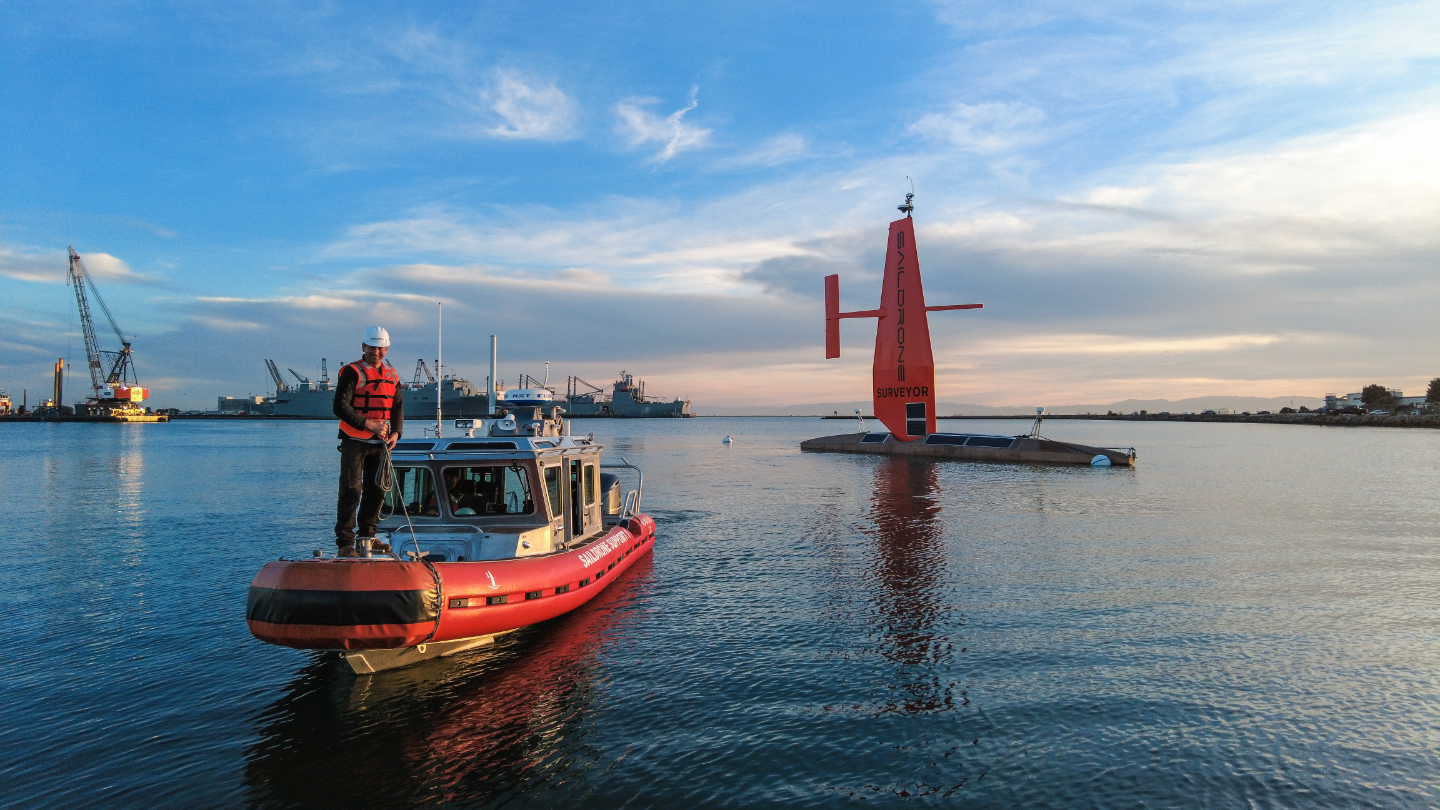 The Saildrone Surveyor was launched from Saildrone headquarters in Alameda, CA, January 2021.

Saildrone is excited to announce it has launched the Saildrone Surveyor, a new 72-foot uncrewed surface vehicle (USV) equipped for high-resolution mapping of the ocean seafloor.

The Surveyor carries a sophisticated array of acoustic instruments for both shallow and deep-water ocean mapping; the Kongsberg EM 304 multibeam echo sounder is capable of mapping the seafloor down to 7,000 meters below the surface.
The Surveyor also carries two state-of-the-art Acoustic Doppler Current Profilers (ADCPs), the Teledyne Pinnacle 45 kHz ADCP and the Simrad EC150-3C ADCP, to measure ocean currents and understand what is in the water column.
The Surveyor is also equipped with the Simrad EK80 echo sounder for fish stock assessments. 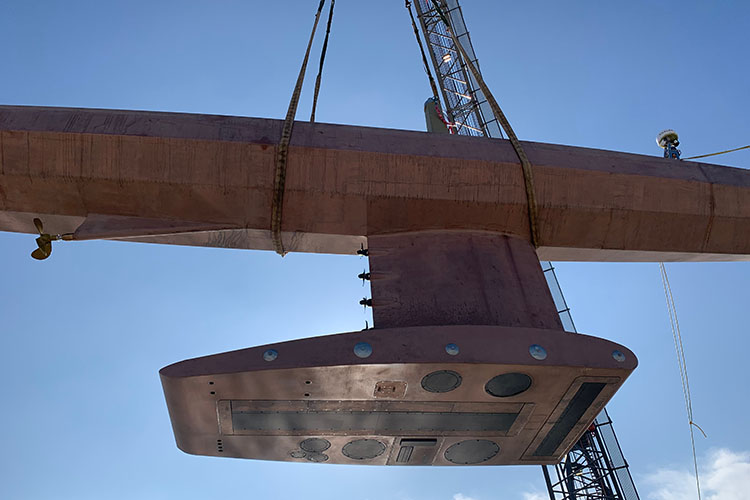 The hull of the Saildrone Surveyor being lifted into the water by crane.
The Surveyor is equipped with a sophisticated array of acoustic instruments including the Kongsberg EM304 multibeam sonar, Simrad EK80 echo sounder, Teledyne Pinnacle ADCP, and Simrad EC150 ADCP.

The launch of the Saildrone Surveyor coincides with the start of the United Nations Decade of Ocean Science for Sustainable Development and presents a paradigm shift in enhanced seabed mapping.
Ocean mapping is currently done with very large and expensive crewed ships.
The Saildrone Surveyor is a scaled-up version of the Saildrone Explorer, the 23-foot wind and solar-powered saildrone, which has been proven in numerous operational missions for science, ocean mapping, and maritime security, covering more than 500,000 nautical miles from the Arctic to the Antarctic.

Like the Explorer, the Saildrone Surveyor is uncrewed and uses renewable solar energy to power its robust sensor suite; the Surveyor delivers an equivalent survey capability, but at a fraction of the cost and carbon footprint of a traditional survey ship and without putting human health and safety at risk. 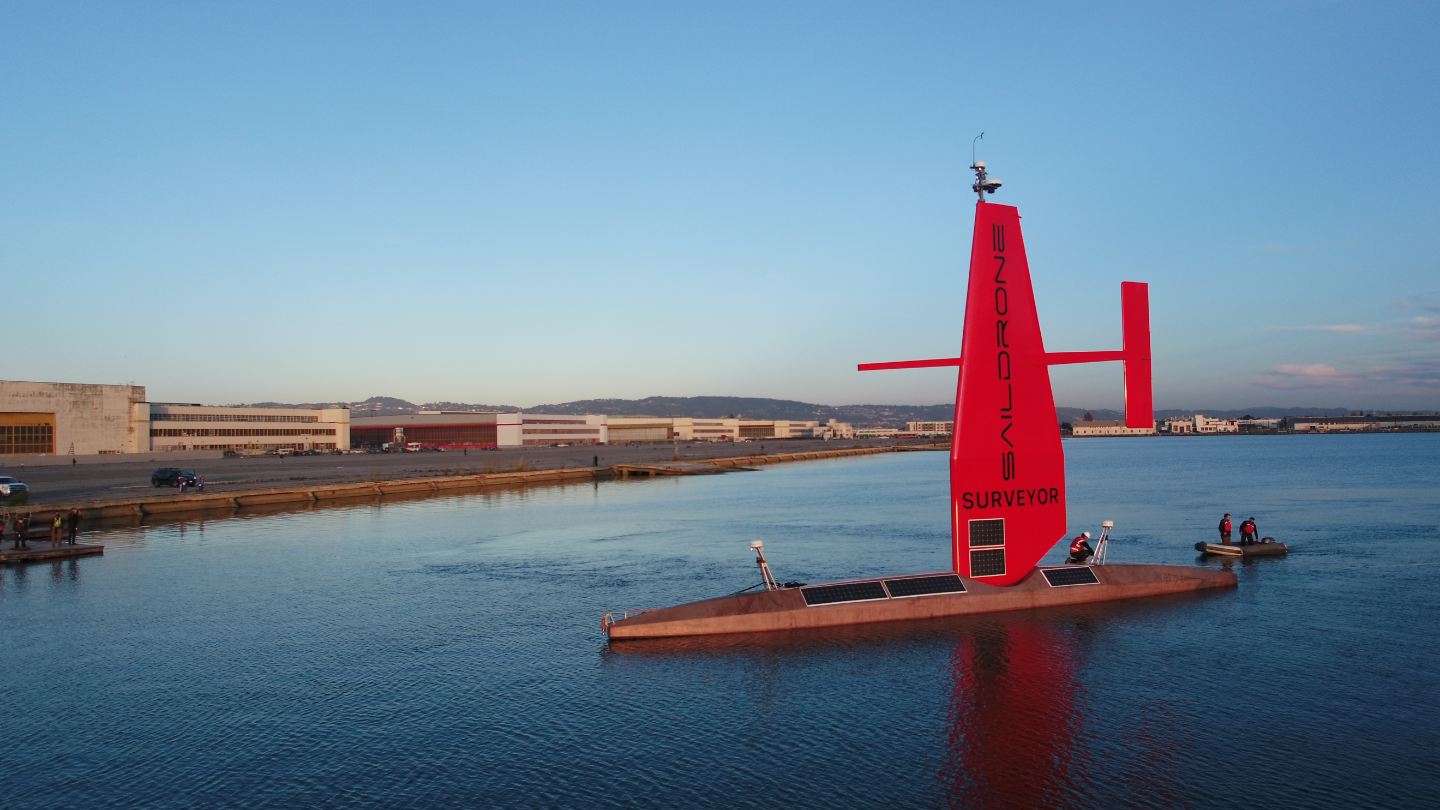 “The launch of the Surveyor is a huge step up, not just for Saildrone’s data services but for the capabilities of uncrewed systems in our oceans,” said Richard Jenkins, founder & CEO of Saildrone.
“For the first time, a scalable solution now exists to map our planet within our lifetime, at an affordable cost.”

Enhanced seabed mapping is vital for the security, safety, and economic health of every country bordering the ocean and critical to the growth of the “Blue Economy,” which, according to the Organization for Economic Cooperation and Development (OECD), is valued at $1.5 trillion a year and creates the equivalent of 31 million full-time jobs.

With the Surveyor, Saildrone aims to accelerate many of the global mapping initiatives that seek to provide better insights into Earth’s processes: Seabed 2030 is a UN-backed joint initiative between GEBCO and the Nippon Foundation to produce a definitive map of the world ocean by 2030, and the 2019 White House Memorandum on Ocean Mapping calls for a national strategy for mapping, exploring, and characterizing the US exclusive economic zone.

“We are excited to see the launch of the Saildrone Surveyor,” said Alan Leonardi, director of the NOAA Office of Ocean Exploration and Research.
“NOAA is supporting the development and testing of this new uncrewed system because we are confident it will expand the capability of our existing fleet of ships to help us accelerate in a cost-effective way our mission to map, characterize and explore our nation’s deep ocean territory, monitor valuable fisheries and other marine resources, and provide information to unleash the potential of our nation’s Blue Economy.” 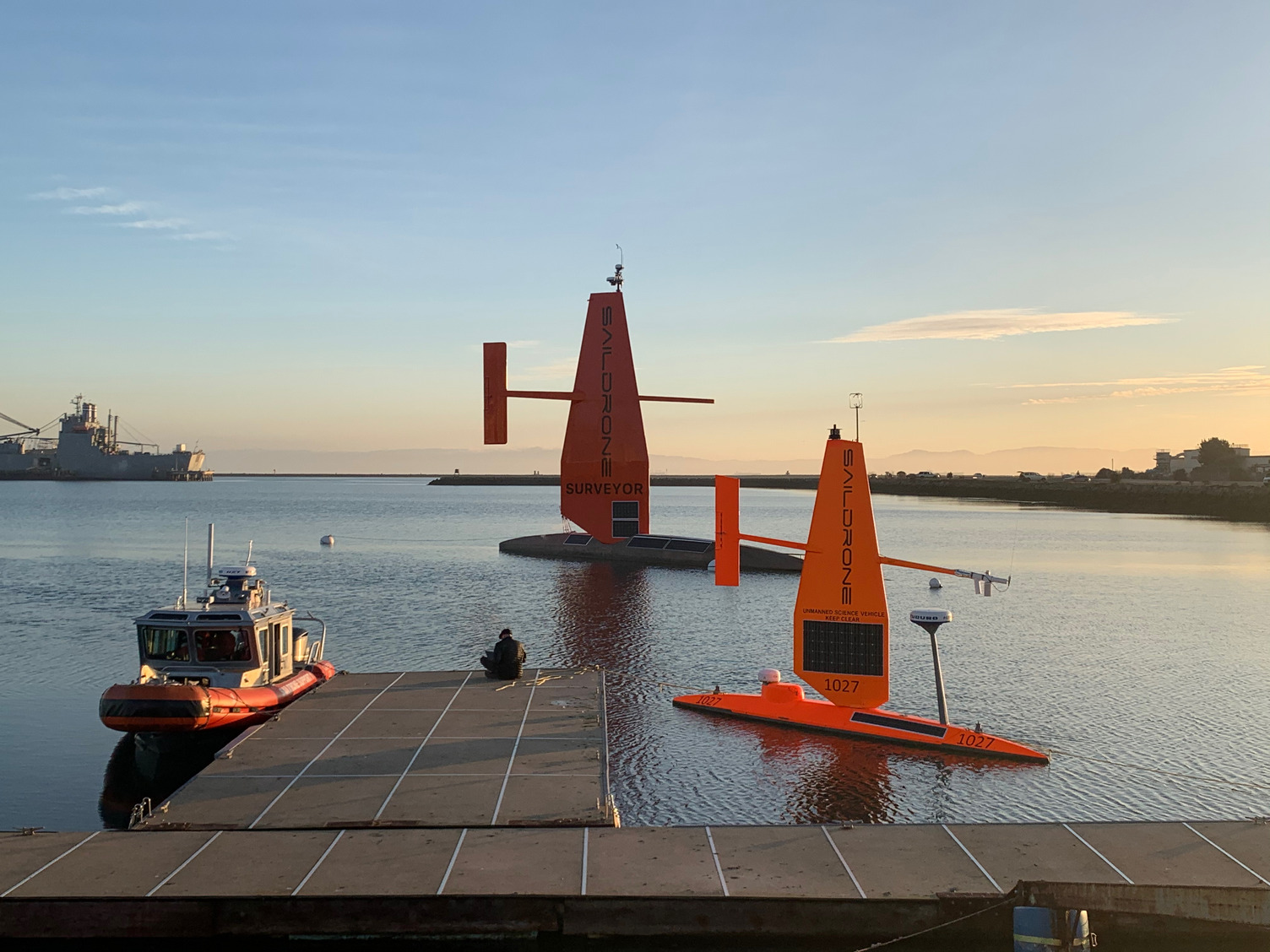 The Saildrone Surveyor with the 23-foot Saildrone Explorer and Saildrone Support boat in Alameda, CA.
The Saildrone Surveyor was developed in part through a public-private partnership with the University of New Hampshire (UNH) and the Monterey Bay Aquarium Research Institute (MBARI) to integrate and test sensors on the Saildrone Surveyor for mapping the seafloor and revealing life in the water column.
While conducting ocean mapping missions, the Surveyor will collect samples of environmental DNA (eDNA) from the water column— DNA originating from the sloughed-off skin, mucus, and excrement of a wide variety of marine animals—which will reveal the genetic composition of organisms inhabiting the water.
This PPP was supported by a three-year grant from the National Oceanic and Atmospheric Administration (NOAA) Office of Ocean Exploration and Research (OER) through the National Oceanographic Partnership Program (NOPP). 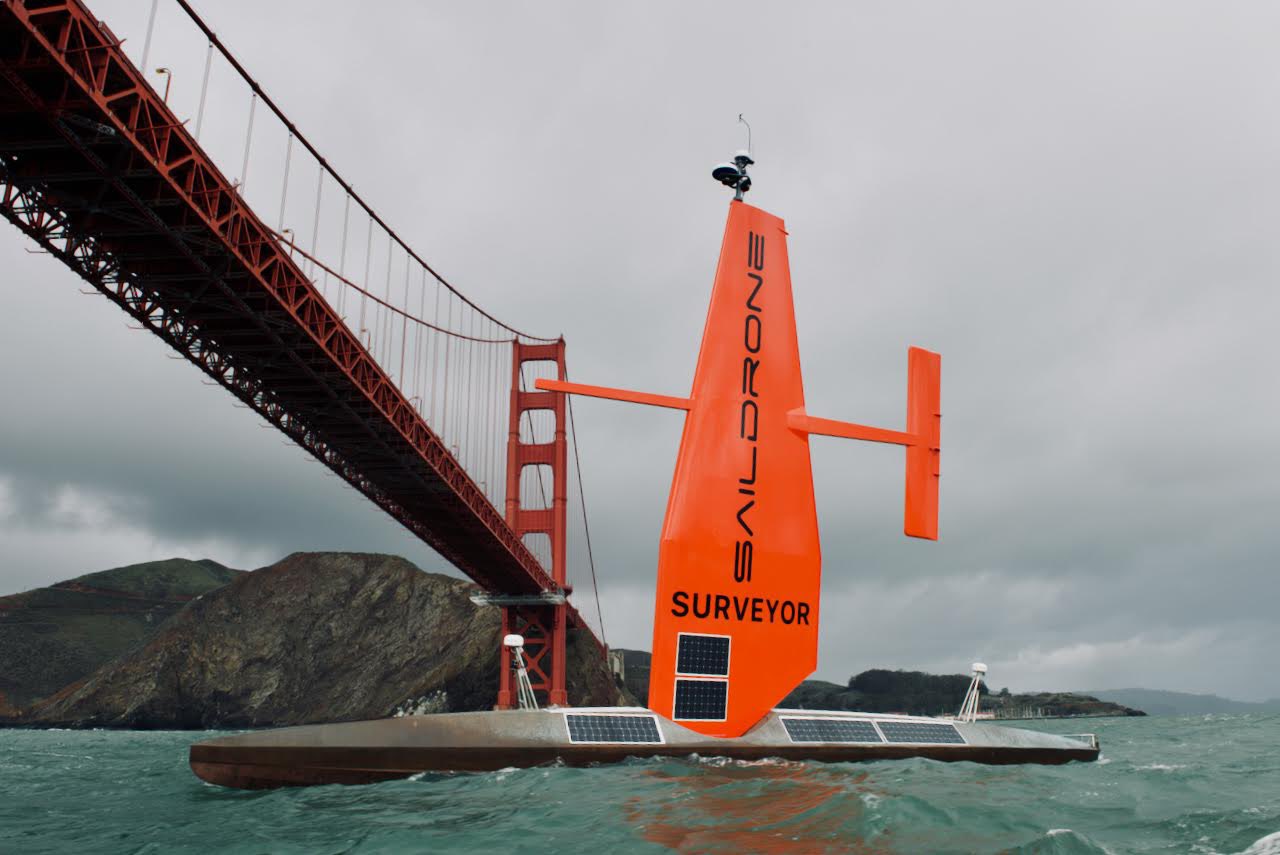 Saildrone’s fleet of USVs has logged more than 10,000 days at sea in some of the most extreme weather conditions on the planet.
In 2020, Saildrone completed its first Arctic mapping mission on behalf of NOAA’s National Ocean Service, and in 2019, Saildrone completed the first autonomous circumnavigation of Antarctica, collecting critical carbon data related to climate science.
Media coverage

To download assets of the Saildrone Surveyor and request an interview or high-resolution assets, visit our Media Room.