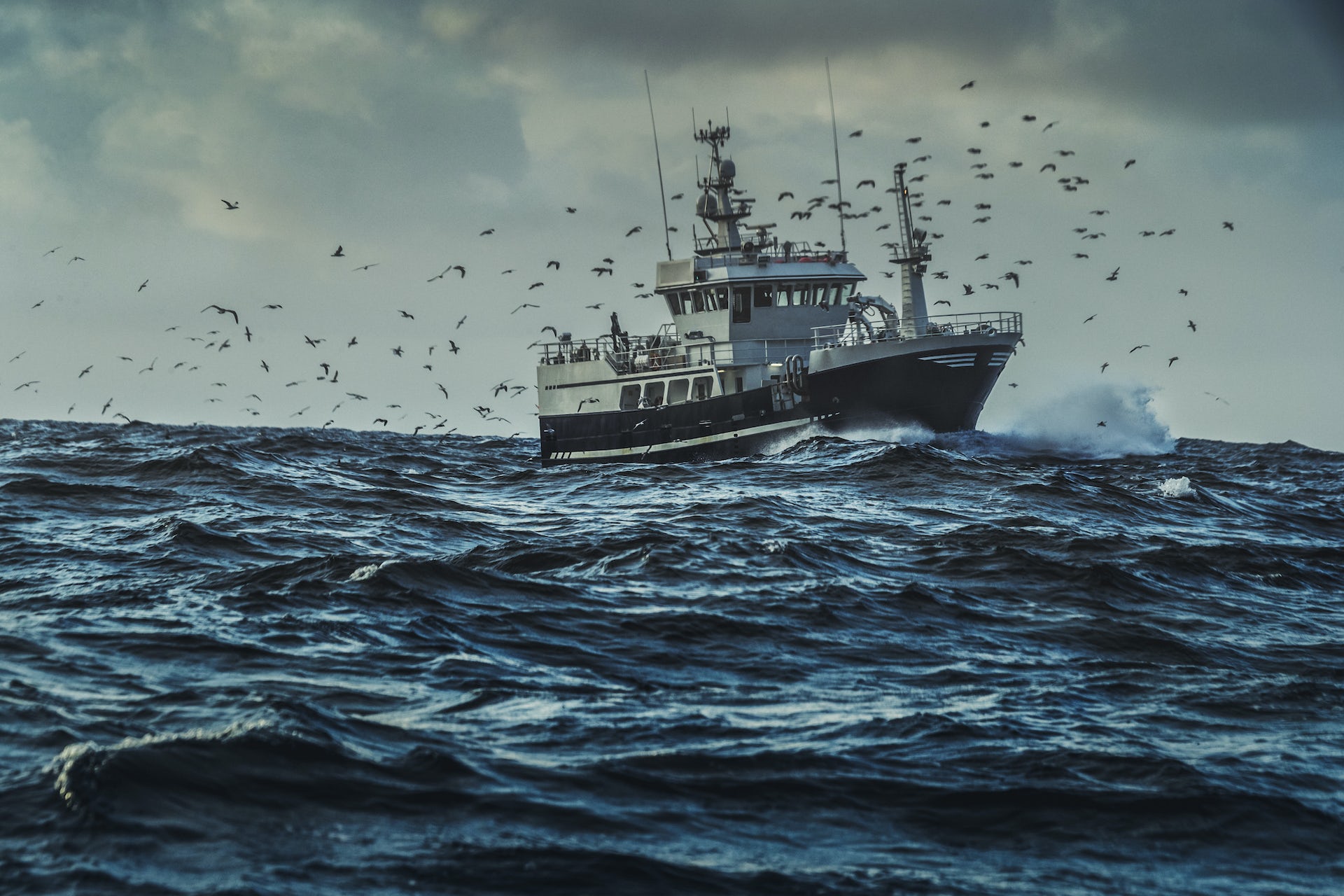 Fishing on the high seas is expensive, and the profits are often small.
Data scientists used  @GlobalFishWatch satellite records to compare movements of 16K fishing vessels.
They found that the paths of roughly 1/5 matched those of known slave ships, estimating that, from 2012-2018, *100,000 people* had been enslaved on them.
From The Conversation by Gavin McDonald

Fishing on the high seas is a bit of a mystery, economically speaking.
These areas of open ocean beyond the territorial jurisdiction of any nation are generally considered high-effort, low-payoff fishing grounds, yet fishers continue to work in them anyway.

I am an environmental data scientist who leverages data and analytical techniques to answer critical questions about natural resource management.
Back in 2018, my colleagues at the Environmental Market Solutions Lab found that high-seas fishing often appears to be an almost entirely unprofitable endeavor.
This is true even when taking government subsidies into consideration.

Yet fishers continue to harvest on the high seas in staggering numbers, suggesting that this activity is being financially supported beyond just government subsidies.

Forced labor is a known problem in open ocean fishing, but the scale has been very hard to track historically.
This mystery—why so many vessels are fishing the high seas if it isn’t profitable—got our team thinking that maybe many of these vessels are, in a sense, being subsidized through low labor costs. These costs could even be zero if the vessels were using forced labor.

By combining our team’s data science expertise with satellite monitoring, input from human rights practitioners, and machine learning algorithms, we developed a way to predict if a fishing vessel was at high risk of using forced labor.
Our study shows that up to 100,000 individuals may have been victims of forced labor between 2012 and 2018 on these ships. 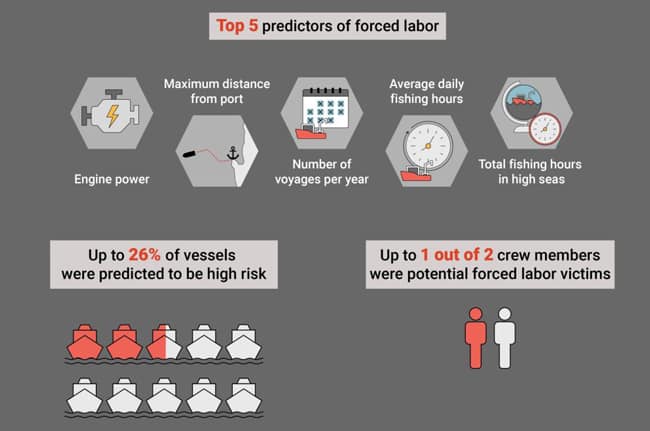 Forced labor is defined by the International Labour Organization as “all work or service which is exacted from any person under the menace of any penalty and for which the said person has not offered themself voluntarily.”
Essentially, many of these workers may be enslaved, unable to stop work, trapped out on the high seas.
Sadly, forced labor has been widely documented in the fishing world, but the true extent of the problem has remained largely unknown.

Our team wanted to say more about how forced labor is being used in fisheries, and the breakthrough came once we asked a key question that drove this project:
What if vessels that forced labor behave in observable, fundamentally different ways from vessels that do not?

To answer this, we first looked at 22 vessels known to have used forced labor.
We got their historical satellite tracking data from Global Fishing Watch—a nonprofit organization that promotes ocean sustainability using near-real-time fishing data—and used it to find commonalities in how these vessels behaved.
To further inform what to look for in the satellite monitoring data, we met with human rights groups, including Liberty Shared, Greenpeace, and the Environmental Justice Foundation, to determine which of these vessel behaviors might indicate a potential risk of forced labor.

This list of indicators included vessel behaviors like spending more time on the high seas, traveling farther from ports than other vessels and fishing more hours per day than other boats.
For example, sometimes these suspicious vessels would be at sea for many months at a time.

Now that we had a good idea of the “risky” behaviors that signal the potential use of forced labor, our team, with the help of Google data scientists, used machine learning techniques to look for similar behavioral patterns in thousands of other vessels.
Shockingly widespread

We examined 16,000 fishing vessels using data from 2012 to 2018. Between 14% and 26% of those boats showed suspicious behavior that suggests a high likelihood that they are exploiting forced labor. This means that in those six years, as many as 100,000 people may have been victims of forced labor. We don’t know whether those boats are still active or how many high-risk vessels there may be on the seas today.
But according to Global Fishing Watch, as of 2018, there were nearly 13,000 vessels operating in industrial longliner, trawler, and squid jigger fleets.

Squid jiggers lure their catch to the surface at night using bright lights; longliner boats trail a line with baited hooks; and trawlers pull fishing nets through the water behind them.
Squid jiggers had the highest percentage of vessels that exhibited behaviors that indicate the potential use of forced labor, followed closely by longliner fishing vessels and, to a lesser extent, trawlers.

Another key finding from our study is that forced labor violations are likely occurring in all major ocean basins, both on the high seas and within national jurisdictions.
High-risk vessels frequented ports across 79 countries in 2018, with the ports predominantly located in Africa, Asia, and South America.
Also notable for frequent visits by these suspicious vessels were Canada, the US, New Zealand, and several European countries.
These ports represent both potential sources of exploited labor as well as transfer points for seafood caught using forced labor.

As it stands now, our model is a proof of concept that still needs to be tested in the real world.
By having the model assess vessels already caught using forced labor, we were able to show that the model was accurate 92% of the time when it flagged suspicious vessels.
In the future, our team hopes to further validate and improve the model by gathering more information on known forced labor cases. 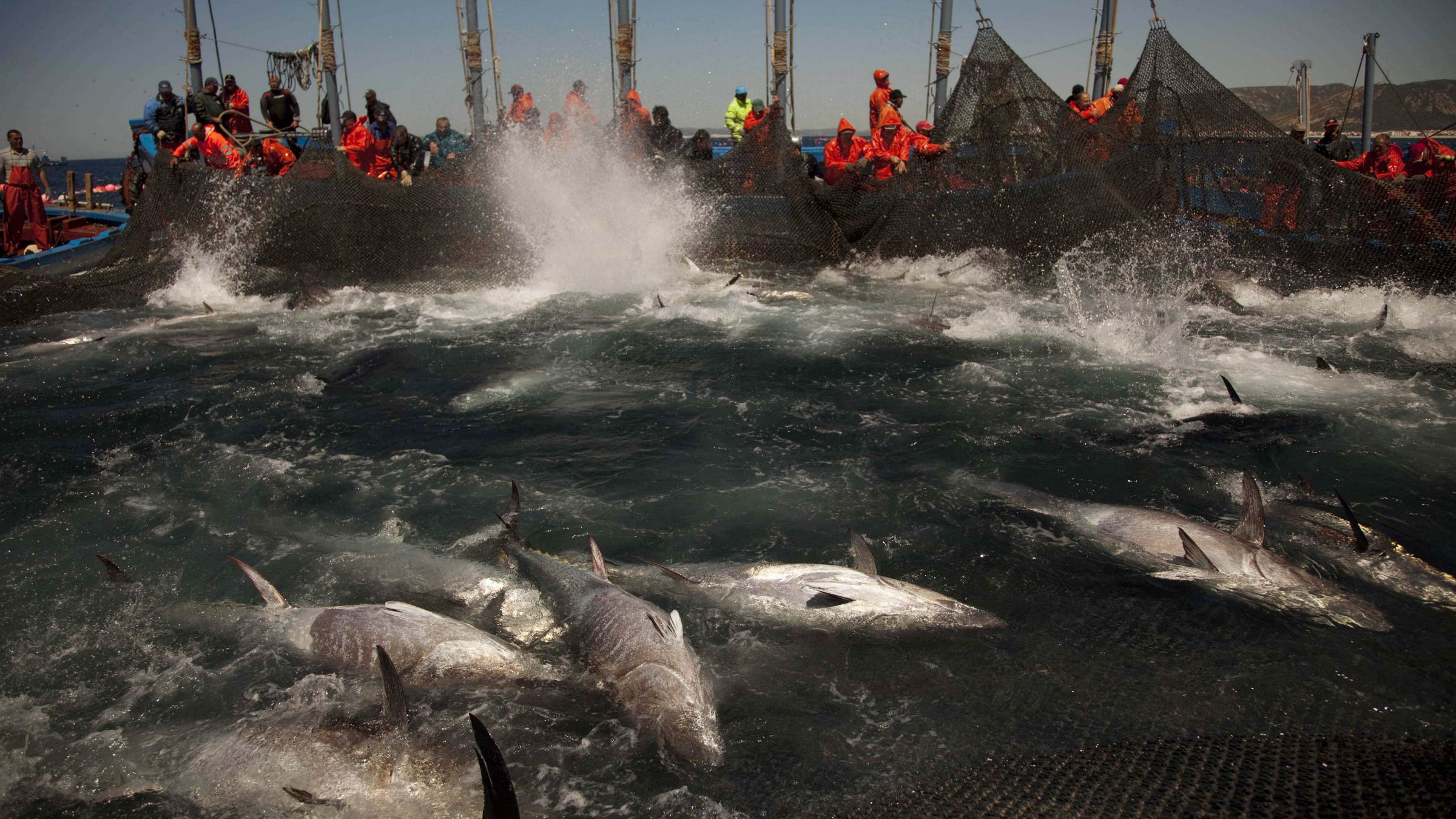 Our team has built a predictive model that can identify vessels that are at high risk for engaging in forced labor.
We believe our results could complement and inform existing efforts to combat human rights violations and promote supply chain transparency.
Currently, our team is using individual vessel risk scores to determine forced labor risks for specific seafood products as a whole.

As we get more substantial data and improve the accuracy of the model, we hope that it can eventually be used to liberate victims of forced labor in fisheries, improve work conditions, and help prevent human rights abuses from occurring in the first place.

We’re now working with Global Fishing Watch to identify partners across governments, enforcement agencies, and labor groups that can use our results to more effectively target vessel inspections.
These inspections offer opportunities to both catch offenders and provide more data to feed into the model, improving its accuracy.
Links :
Posted by geogarage at 1:08 AM