Humanity’s construction footprint in the seas amounts to 32,000 square kilometers 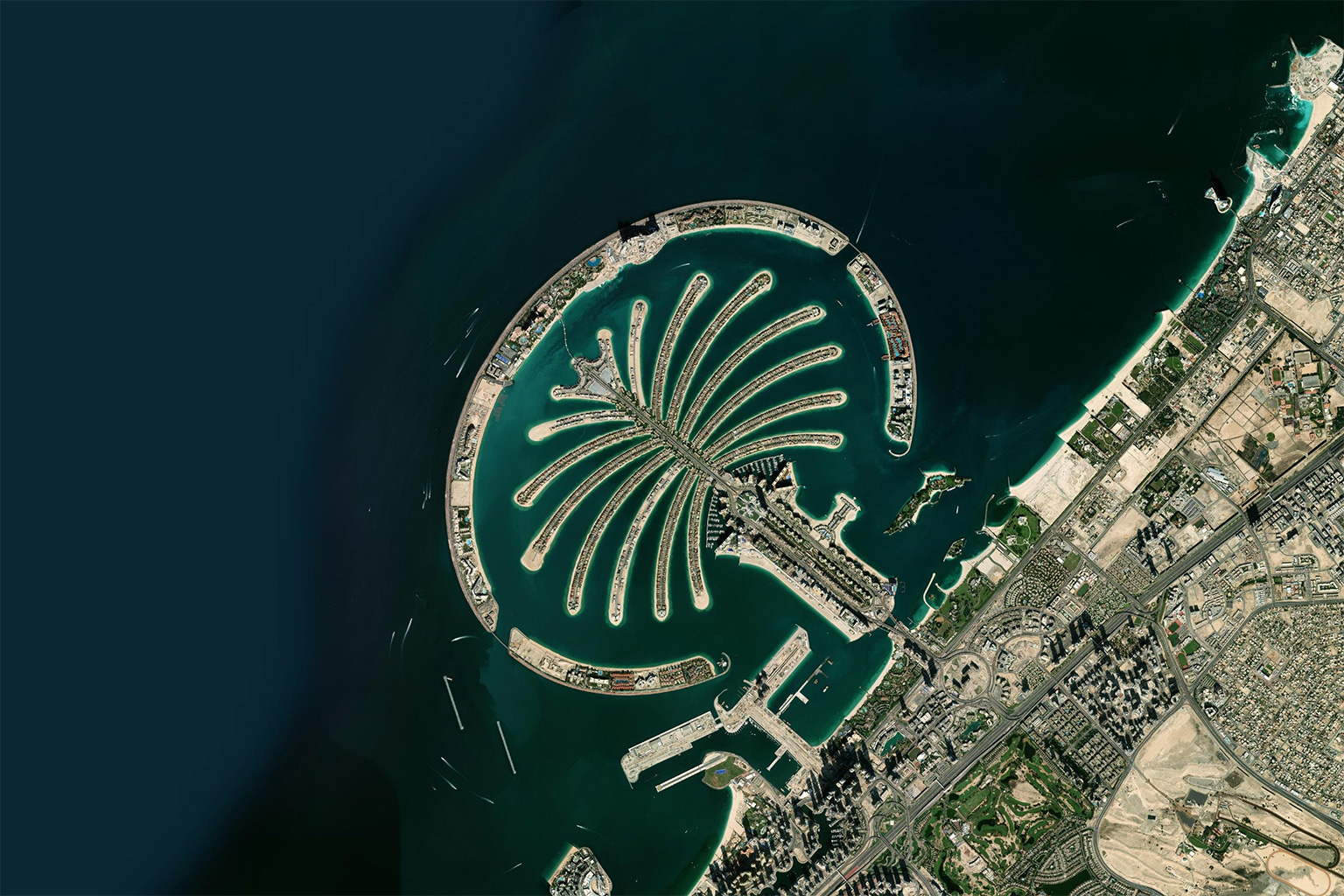 Palm Jumeirah
From Mongabay by Allison Gasparini
From underwater tunnels to bridges to communication cables snaking across the ocean floor, structures made by humans are encroaching on marine life at an ever-growing pace.
Our physical footprint of marine construction covers an area of 32,000 square kilometers (12,000 square miles) on the seafloor globally, according to a recent study in Nature Sustainability.

The area spanned by these and other structures, such as artificial islands for coastal residents and vast aquaculture farms near shore, already is larger than the entirety of Belgium.
And it’s only projected to get bigger over the next decade, conclude the scientists, who project the area to expand by another 7,300 square kilometers by 2028.

The study marks the first time that the impact of marine structures on our global seascape has been quantified.
Researchers from the University of Sydney, Australia, collaborated with an international team to synthesize the available global data on marine structures and used it to come up with a conservative estimate of sprawl size. 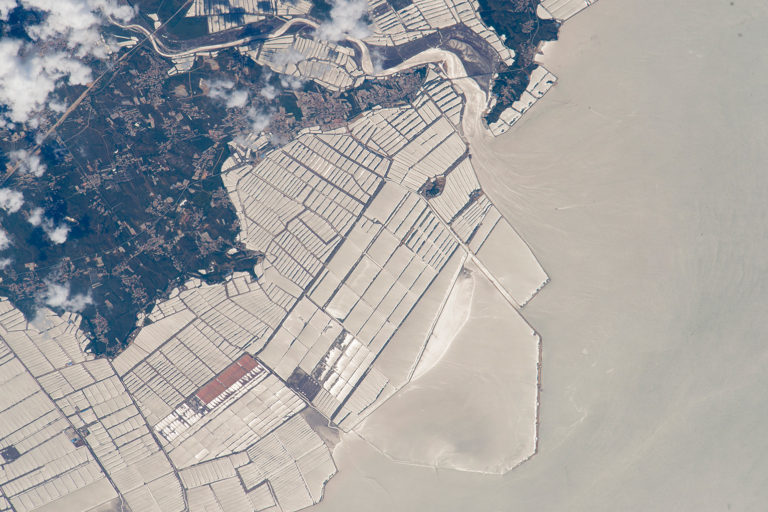 Taken by an astronaut aboard the International Space Station, this picture shows fish farms along the coastline of the Liaoning Province in China.
Photo credit: NASA
“I’m gravely concerned about the damage that we’re doing to the marine environment,” said Louise Firth, a marine ecologist at the University of Plymouth, U.K., who was not involved in the study.
Yet in spite of concerns within the scientific community, no team had tried to grasp the complete scale of the activity until now, she said: “This is a great first step.”

Despite limitations and gaps in information, the map provides a valuable jumping-off point for future efforts to minimize the damaging impacts of human construction on marine ecosystems, said lead author Ana Bugnot, a marine ecologist at the University of Sydney.

“There’s an idea that the ocean is vast, and no matter what we do we’ll never destroy it,” Bugnot said.
“If we can get an estimate of how much we’ve damaged the environment in a number, people are more likely to pay attention.”
Such measurements help numbers-oriented people in positions of power, such as policymakers and construction managers, recognize that marine structures have profound impacts, Bugnot told Mongabay. 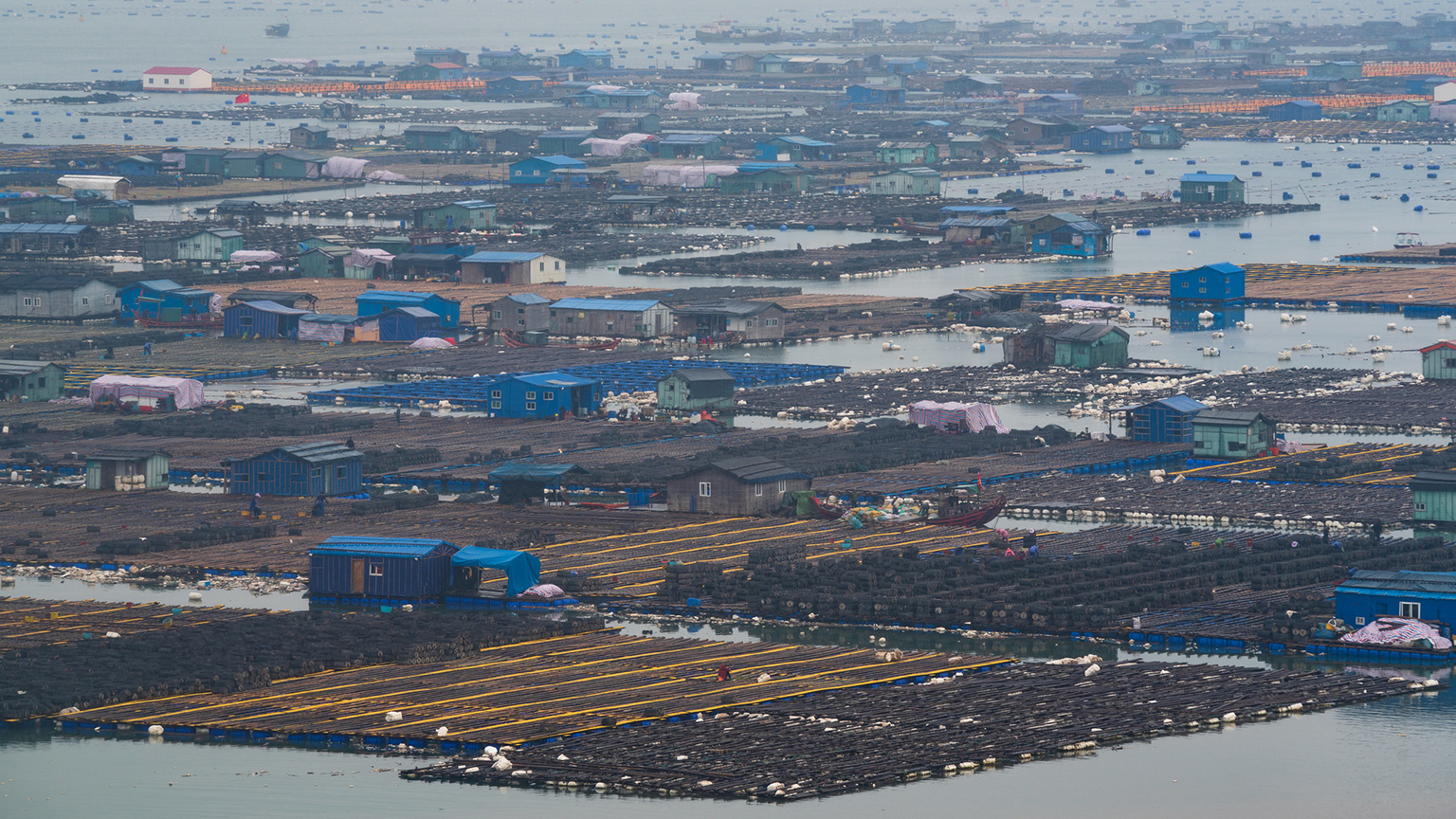 Floating sea farms off the coast of Xiapu, China.
Photo credit: Alex Berger
It took five years for the team to collect data, because there were no centralized sources.
While big corporations usually have archives of information, said Bugnot, some industries are secretive.
For instance, telecommunication companies might not divulge where they place cables on the seafloor.
Many countries are less willing to share details about their coastal development programs.

According to the study, most marine construction—a term that encompasses marinas, commercial ports, oil rigs, and more—is located within the Exclusive Economic Zones belonging to coastal nations.
In the United States alone, more than 50 percent of the country’s natural shoreline has been replaced by structures, such as seawalls and breakwaters.

Aquaculture farms, where workers produce seafood from shrimp to clams to fish, account for many of the marine structures today.
However, the study projects that structures related to alternative energy, such as windmill platforms and tidal farms, will grow most quickly going forward—expanding in area as much as 208 percent each year.

Most tricky for the team was gathering information on locally managed structures, such as artificial reefs—synthetic creations used to help restore coral reefs.
Most such structures have unreliable records and aren’t even managed, Bugnot said.
These manufactured habitats are tools of conservation, but they can have negative impacts if overdone in sensitive areas close to shore, she noted.

Bugnot and her colleagues hope managers and developers will use their map for spatial planning.
By determining where existing structures are located, communities can prioritize where and how to place new eco-friendly construction.

“At no point in this article are we saying, ‘You have to stop all marine construction.’ That’s just not going to happen,” said Bugnot.
“It’s about finding compromises.”
Links :
Posted by geogarage at 12:12 AM