New Atlantic marine sanctuary will be one of world's largest

A seabird flies over Tristan da Cunha Island.
The region is an important seabird sanctuary and home to tens of millions of albatross, penguins, and other species.
A newly declared marine protection zone will protect the critical foraging grounds the birds need to thrive.
Photograph by Dan Myers, National Geographic Pristine Seas

Whales, sharks, seals, tens of millions of seabirds, and just under 300 humans inhabit the small islands that make up Tristan da Cunha.

The waaters around one of the world’s most remote inhabited islands, in the middle of the South Atlantic Ocean, are set to become the fourth largest completely protected marine area in the world, and the largest in the Atlantic. 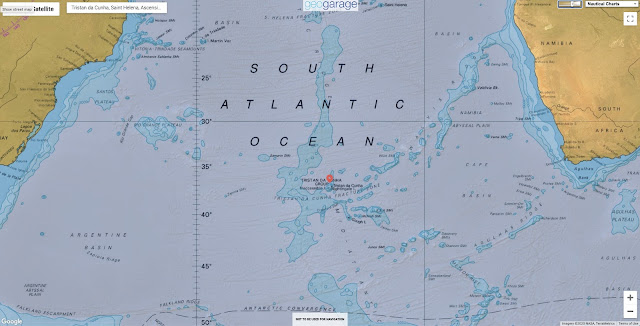 Localization with the GeoGarage platform (UKHO nautical raster chart)
Tristan da Cunha, a British territory, is 2,300 miles east of South America and 1,600 miles west of South Africa.
To reach it requires a seven-day boat trip from South Africa, and once you’re there, “you feel so much like you’re at the edge of the world,” says Jonathan Hall, the head of the U.K. overseas territory unit at the Royal Society for the Protection of Birds (RSPB).

Today Government and people of #tristandacunha are proud to announce creation of the Tristan da Cunha Marine Protection Zone. Almost 700,00km2 will join UK #BlueBelt of marine protection, becoming the largest no-take zone in the Atlantic and the fourth largest on the planet. pic.twitter.com/3Dmn4ppEmd

Now, this four-island archipelago will be the site of a marine sanctuary that spans 265,347 square miles, making it almost three times larger than the United Kingdom.
Announced today by the Tristan da Cunha government, 90 percent of the waters around the island chain will become a “no-take zone” in which fishing, mining, and other extractive activities are banned.

Not only will this help bolster a small lobster fishery outside the sanctuary, say conservationists, but also it will protect foraging grounds for the tens of millions of seabirds that roost on the islands, such as yellow-nosed albatross and rockhopper penguins, and habitat for seals, sharks, and whales.
The new protected area will join the U.K.’s Blue Belt Programme, which, as of today, safeguards 2.7 million square miles of marine ecosystems around the world.
The new sanctuary is the result of a collaboration between the Tristan da Cunha and U.K. governments, and a number of other conservation groups, including RSPB, which has worked in the region for 20 years, and the National Geographic’s Society's Pristine Seas initiative. 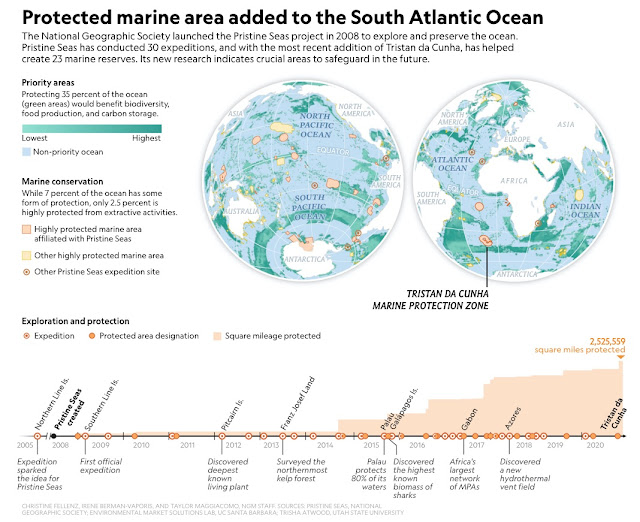 The Edinburgh of the Seven Seas
In a 2014 article that appeared in the now shuttered National Geographic Traveler magazine, writer Andy Isaacson described Tristan da Cunha—or simply Tristan, as it’s often called—as a mix between Scotland and California’s Big Sur.
Jutting from this main island is an active volcano that’s capped with snow in the winter and marked by steep cliffs where albatross build their nests.
Along the beaches are colonies of seals and penguins, and just offshore lie golden kelp forests.
Only one tree species exists on the island, phylica arborea, or “the island tree.”
About 245 people of Scottish, American, Dutch, and Italian heritage live in Tristan’s only village, called Edinburgh of the Seven Seas.
First discovered by Portuguese explorer Tristão da Cunha in 1506, the island wasn’t inhabited until 1816, when a British garrison was stationed there to prevent the French from rescuing exiled emperor Napoleon from St. Helena Island, 1,343 miles north.
The descendants of those British sailors and a smattering of others over the years populate the island, keeping sheep, growing potatoes, and fishing for lobster.
While humans are scarce, wildlife is abundant on Tristan da Cunha, with seabird populations numbering in the tens of millions.
Every evening on the island, “the air just looks like it’s black with smoke as birds descend,” says Hall. “The scale of life is just so amazing.”
During a 2017 expedition to research the archipelago, scientists from National Geographic Pristine Seas also discovered a large population of migratory blue sharks, a species that’s heavily overfished for their fins.
“This is a place that has a unique ecosystem that is found nowhere else,” says National Geographic Explorer-in-Residence Enric Sala.
It’s the only region for thousands of miles with coastal ecosystems like kelp forests, he notes, and it’s a critical nursery for blue sharks. 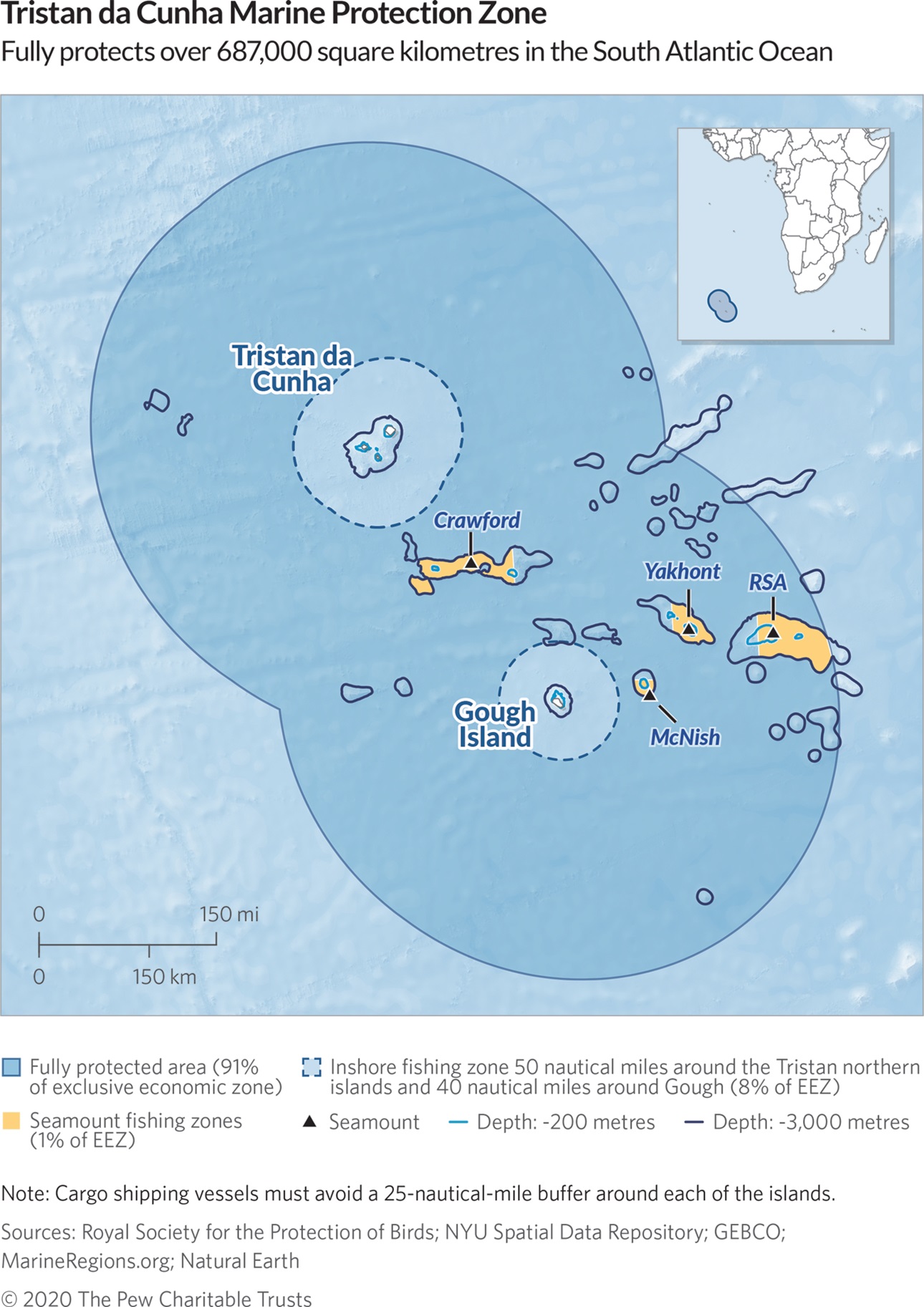 Benefits from marine protection
As remote as it is, Tristan da Cunha is not without its conservation threats. Invasive mice, brought by passing ships, kill about two million birds a year.
The first eradication program will take place in 2021.

Dolphins swim through the territory's waters.

A National Geographic Pristine Seas expedition diver works in the golden kelp forest off the coast of Tristan da Cunha Island.
The National Geographic Society worked with the Royal Society for the Protection of Birds and the Tristan da Cunha government to launch a research…
Photograph b Roger Horrocks, National Geographic Pristine Seas
Offshore, RSPB’s Hall says the region has seen illegal fishing vessels.
Tristan da Cunha’s residents operate a lobster fishery that’s certified as sustainable by the Marine Stewardship Council.
The new marine reserve excludes the designated fishing zones just offshore several islands. Inside the marine reserve, no fishing will be permitted.
A 2017 report by Pristine Seas used satellite data to track fishing vessels in the area from 2014 to 2016.
A majority of the 253 vessels logged appeared to be passing through, but 11 showed activity consistent with fishing.
Industrial fishing can lead to seabirds, sharks, and other important species inadvertently caught in nets or on fishing lines.
Under the protection of the U.K.’s Blue Belt Programme, Tristan da Cunha will receive more resources for patrolling its waters for illegal fishing activity, says Hall.
Marine protected areas (MPAs) are seen by experts as a conservation silver bullet.
A study published on Tuesday in the Proceedings of the National Academy of Sciences further corroborated established scientific evidence that MPAs worldwide protect food supplies by producing larger catch yields.
Fisheries that are left undisturbed can produce a “spillover” effect in which an abundance of fish from a protected area “spill over” into fishing hotspots.
Expanding the current network of protected areas by just 5 percent, the study found, could boost global fish catch by at least 20 percent.
“The increasing demand for seafood from an increasing and burgeoning human population, in addition to the expected negative impacts of climate change on many fisheries, elevates the need for managing and protecting fish stocks well,” says Reniel Cabral, an ecologist at the University of California, Santa Barbara, and one of the study’s authors.
More to do
Around 8 percent of the world’s oceans are designated as MPAs, but only 2.6 percent are totally off limits to fishing.

Albatross chicks roost at Tristan da Cunha Island.
While the new marine reserve protects waters needed for albatross foraging, chicks face a large threat from the invasive mice populating the island.
An eradication effort is set for next year.
Photograph by Dan Myers, National Geographic Pristine Seas
The National Geographic Society’s Campaign for Nature Initiative has called for 30 percent of the ocean to be protected, a figure their research shows would allow ecosystems to provide benefits like ample fish stocks.
Safeguarding that much of the ocean, they say, will also help protect critically endangered species from extinction.
“We have 10 years to protect 30 percent of the ocean if we want to stop the extinction of species,” says Sala.
He says these protected areas must be in large pristine areas like the waters around Tristan, but he notes that the world needs a larger number of small MPAs in parts of the world with more active commercial fisheries, like the U.S. and Meditteranean.