Sinking of the Italian yacht. Yves Le Cornec: "The Corsican carto is no less good than elsewhere! »

After hitting a rock off Cavallo Island, the 22-metre Italian yacht immediately sank.
Its 11 passengers were unharmed, but only had time to evacuate the ship.
Marine Nationale

From V&V by Nicolas Fichot (translated from French)

Régis, the 22-metre Italian yacht, which had hit a rock on Saturday afternoon in the south of Corsica before sinking, was probably the victim of a piloting error, no doubt linked to a misuse of Mediterranean cartography.

Its 11 passengers had been rescued, but the wreck has since caused controversy over the supposed inaccuracy of the cartography of certain areas in the Mediterranean.
An argument that Yves Le Cornec sweeps aside with an energetic backhand.

"The cartography off Corsica is not 'worse' or 'better' than elsewhere in the Mediterranean, or even in my opinion, than in the Atlantic. I don't have an opinion on the sinking of this Italian yacht and even less on the causes of this accident, but in my opinion, the problem is not in the accuracy of the nautical charts here and there," Yves Le Cornec explains in no uncertain terms.

After making a name for himself in ocean racing, Yves Le Cornec
is now the Nautor Swan agent on our Mediterranean shores

You have to believe Yves Le Cornec: after having criss-crossed the oceans during races and gleaned numerous podiums, he "retired from business" in ocean racing and became the representative for the South of France of the prestigious Nautor Swan shipyards. Based in Villefranche-sur-Mer (Alpes-Maritimes), Yves Le Cornec speaks about sailing in the Mediterranean as an irrefutable connoisseur.

"Whether sailing or motoring, the problems of cartography remain the same: far too many skippers are sailing with sectorial maps which are not sufficiently up to date".

The 72-foot Italian yacht Régis hit a rock in the south of Corsica on Saturday afternoon and sank.

"You shouldn't take your plotter or plotter at face value if the information it possesses is ten years old, if not more. Don't laugh, I saw that! And if the vector charts are not up to date, then it's better to use Raster charts, which are actually paper charts that have been scanned but were originally produced by the SHOM or the Admiralty. These too are regularly updated, by the way".

And in the benefit of the doubt, when you are sailing in areas full of rocks, you are even more wary, you progress slowly and you reinforce the visual watch," Yves Le Cornec advises again. And don't tell me that there are more pebbles in the Mediterranean than in the Atlantic, that's a legend. The Atlantic tides tend to complicate situations up there, as far as I know! ». 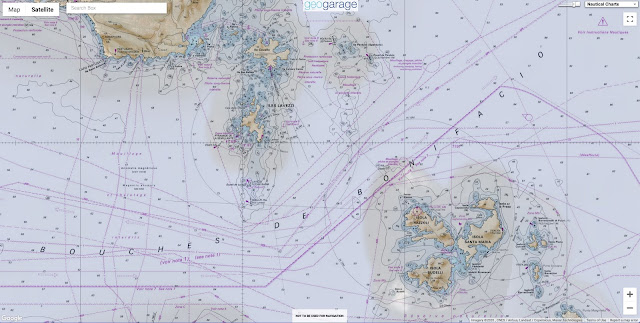 Between the south of Corsica and the north of Sardinia, the area where the shipwreck occurred, there are a lot of rocks.
Bouches de Bonifacio in the GeoGarage platform (SHOM chart) 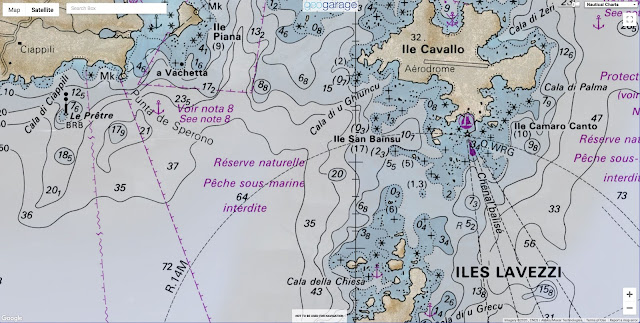 Between the south of Corsica and the north of Sardinia, the area of the shipwreck, the rocks are swarming
The Italian yacht hit a rock in the vicinity of Cavallo Island, an area where nautical charts can be useful, before sinking.
Largest scale map from SHOM in the GeoGarage platform
chart 7024, scale 1:51,600, edition 5 2012 / correction 49 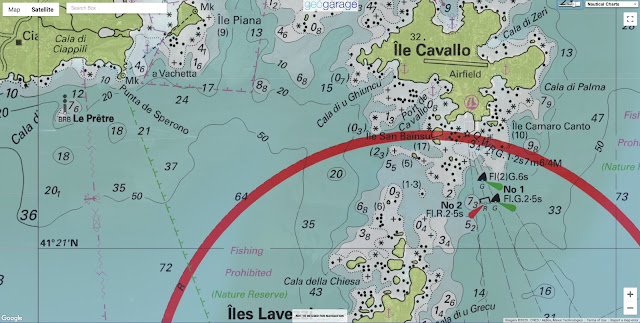 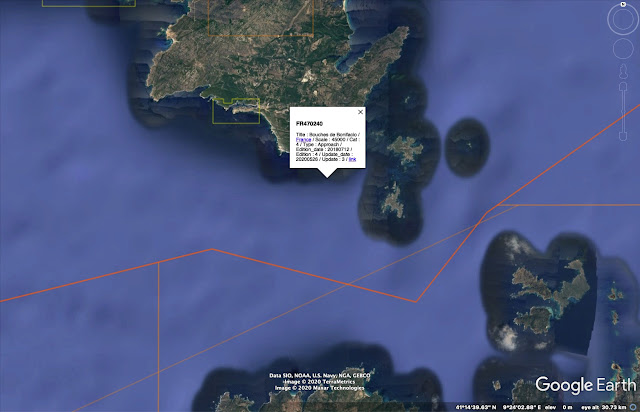 only one available offical ENC in the area (FR470240 SHOM) 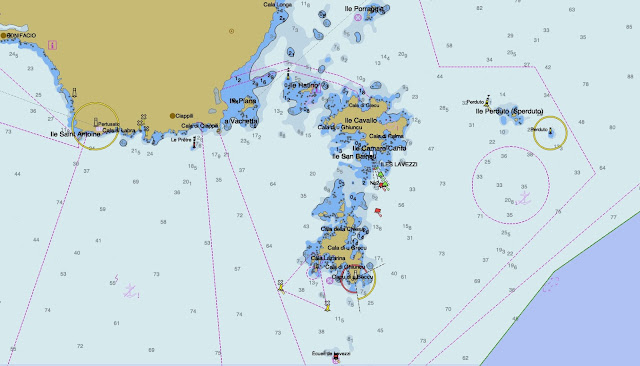 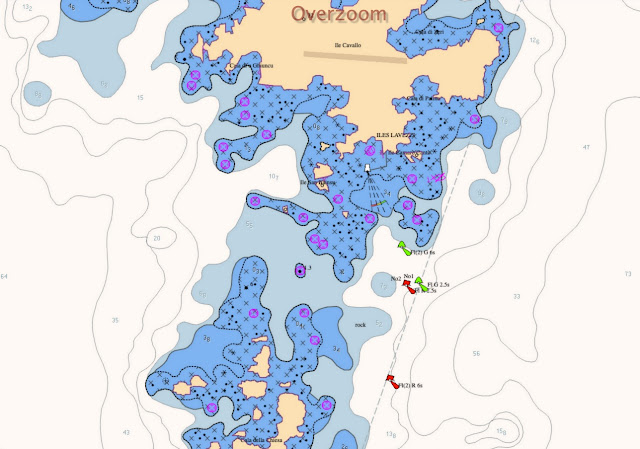 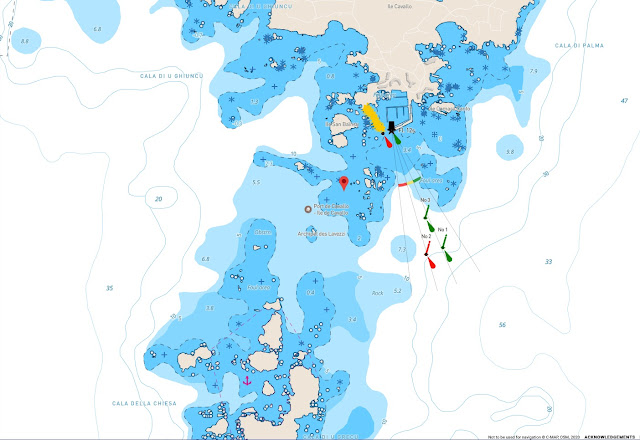 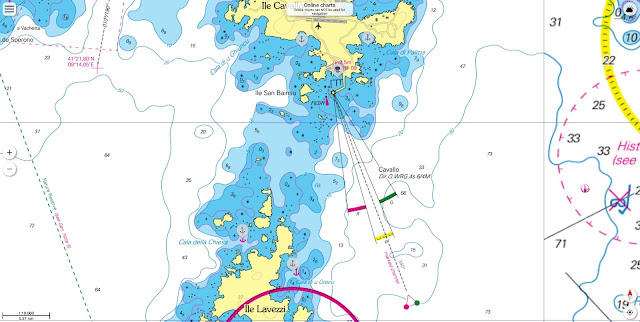 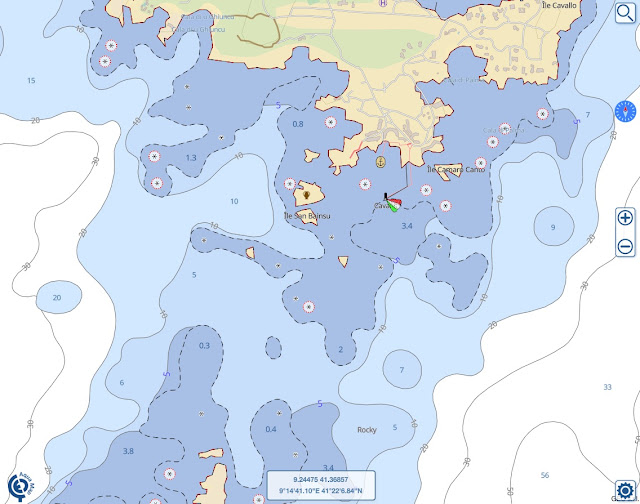 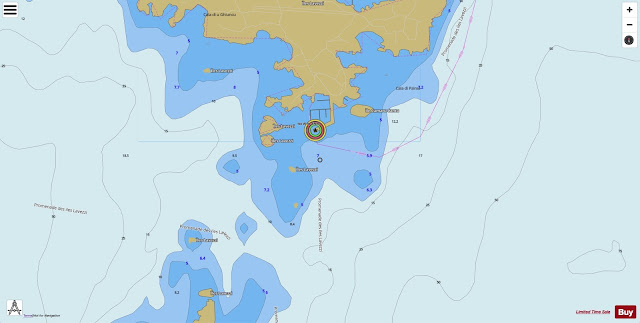 And to conclude, Yves Le Cornec sweeps this legend aside in a different way on the Mediterranean charts, which are reputed to be less precise than in the Atlantic: "I've always heard that, and its opposite a few pontoons further on. In both cases, the same services worked with the same means and in my opinion with identical precision results. Perhaps more simply that in some navigation areas, there is less 'religion' in the charts than elsewhere".